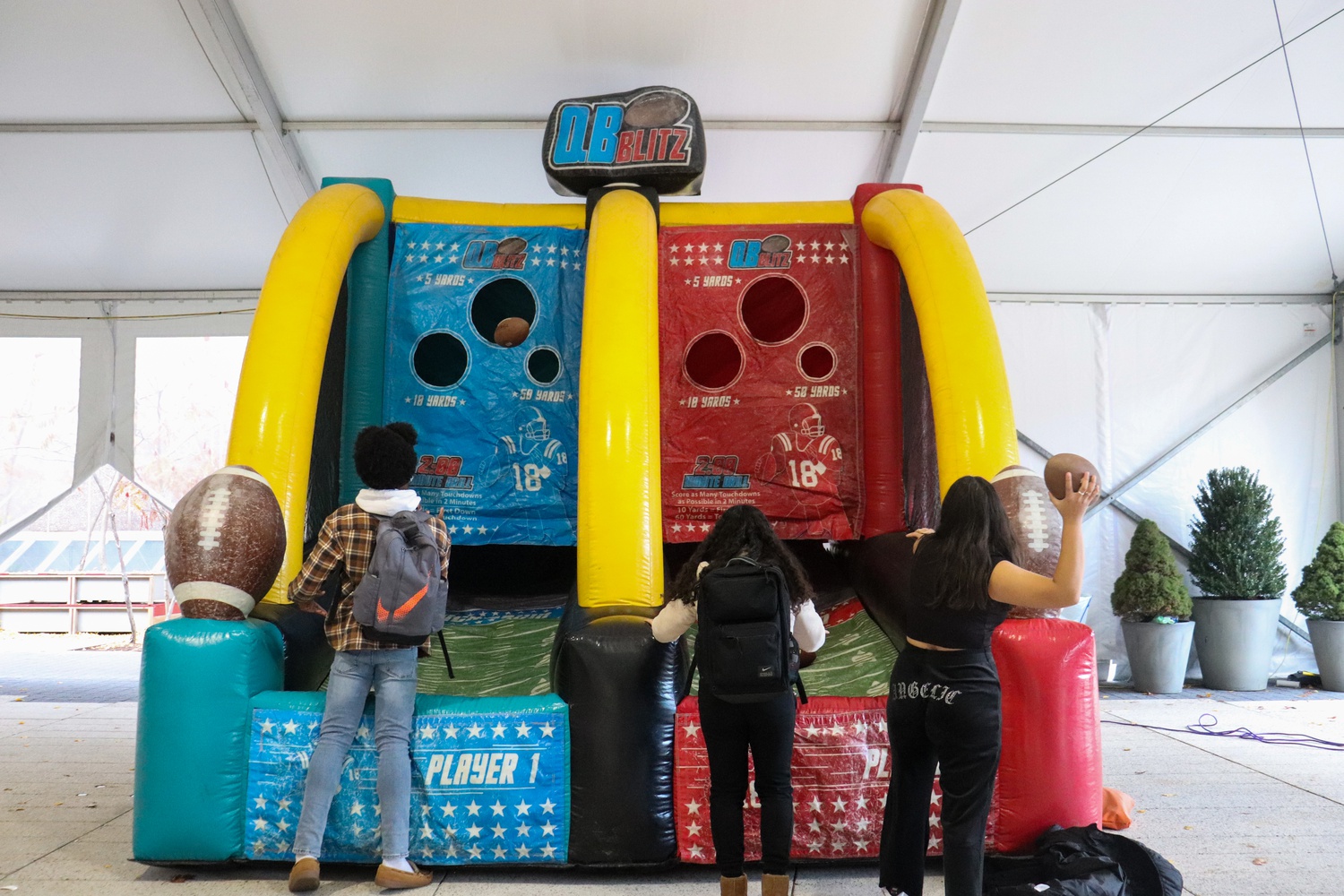 At an event during Harvard-Yale Spirit Week, hosted by the Harvard College Events Board, students played QBBlitz, in which they threw footballs at a goal. By Truong L. Nguyen
By Katerina V. Corr and Devinder S. Sarai, Contributing Writers

In anticipation of the 137th Harvard-Yale football game this upcoming Saturday, the College Events Board hosted a week of spirit events featuring plate smashing, Yale-bashing stand-up comedy, and musical performances.

The spirit week — an annual tradition held by the CEB — is the first in-person, on-campus spirit week held in two years. Harvard planned a remote spirit week earlier in the pandemic last year, though the Game was canceled.

CEB Co-President Nicole T. Rozelman ’23, who planned the events this year, said she was happy with students' reception of the spirit events.

“I was seeing so many students walking through the Yard and pointing at different things and nudging their friends and being like, ‘Oh my God, let’s go check this out,’” she said.

Yale will not be hosting Harvard students over the weekend of the Game, so the CEB will be hosting an additional event, the HYpeFest, on Friday.

“The Friday event was added this year in recognition that more students than usual might not be able to be overnight in New Haven or get to The Game at all. We wanted a good kickoff event for them on Friday,” Assistant Director of Student Programs Miguel Tejada wrote in an email.

“I just got a free waffle from some random girl. So you know what, I’m living my best life,” attendee Julia S. Casas ’24 said.

A popular attraction at CrimsonPalooza was the “rage room” where attendees had the chance to break ceramic and glass dishes by throwing them against a wall or smashing them with a baseball bat.

“I was able to get a lot of anger out,” said Azeez S. Richardson ’25. “Finals are coming up, there’s just a whole lot of other stuff going on. So that was very cathartic.”

Richardson added the event helped him get more excited for the Game.

“It’s a nice time for Harvard students to really get energized, further socialize, and get ready for the weekend. It’s going to be a huge weekend and I’m excited for it,” he said.

Rozelman said that attendance was especially high at the Bulldog Roast, estimating that 300 people attended the event at the Smith Campus Center on Wednesday evening.

Berry compared Harvard and Yale by a “Nobel-o-meter,” “President-o-meter," college rankings, and the number of Rhodes Scholars from each school. He even referenced the Collegiate Peaks — a mountain range in Colorado with Mt. Harvard as its highest peak and Mt. Yale as its fifth-highest.

“It was really fun,” Abeyweera said. “Andrew Berry was great as always.”

“I just want to preface by saying that I actually know nothing about Yale and that’s because I’m a low-income student from a high poverty area and my high school didn’t really teach us about stuff like safety schools,” she said during her comedy act.

Berry ended his act comparing various t-shirts with slogans such as “Yuck Fale” and “Yale, always #2”.

“And finally, as my favorite t-shirt, which is the best of the lot I've seen over the years: what do all Harvard and Yale students have in common? They all got into Yale."