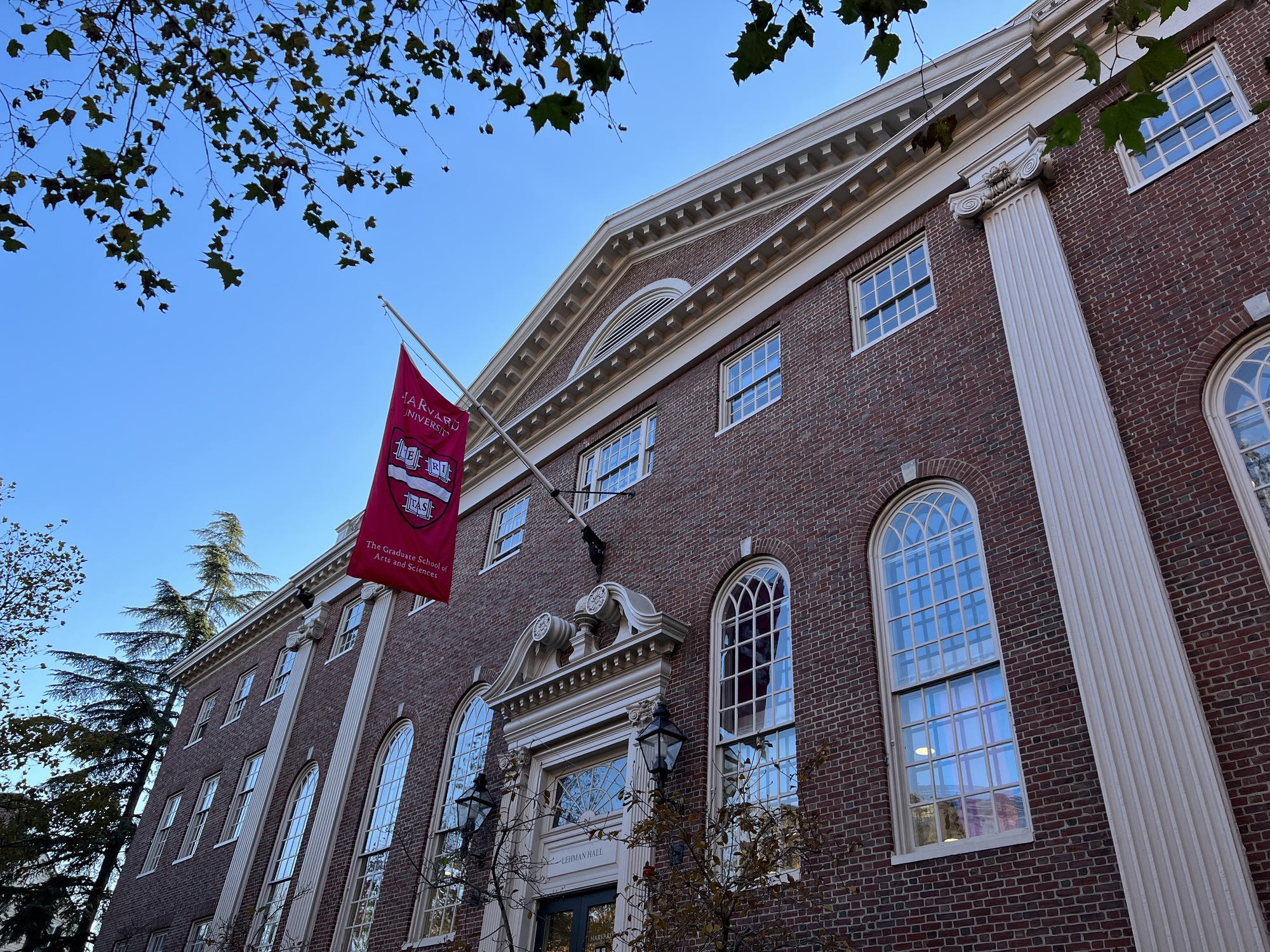 By Isabella B. Cho, Crimson Staff Writer
Lehman Hall, at the intersection of Harvard Yard and Harvard Square, is the center of student life for the Graduate School of Arts and Sciences. By Angela Dela Cruz

After a semester in which she felt driven out of her own apartment by bullying and discrimination, Harvard graduate student Emmeline (not her real name) logged onto a Zoom meeting in early July with hopes the University administrators she was meeting with could turn the situation around.

During the roughly hour-long meeting, Emmeline said, she told the administrators — including Graduate School of Arts and Sciences Dean of Student Affairs Samuel H. Bersola — of her two GSAS roommates’ months of behavior that left her feeling unsafe in the apartment. The events led her to withdraw from the semester early and return home.

Yet after logging off the call, Emmeline said she felt the administrators had made the situation worse. During the meeting, she said, Bersola encouraged her to move on from the complaint and instead turn her attention back to coursework to ensure she could receive her Harvard degree. Though the administrators pledged to look into her allegations further, she said the call left her distrustful they would do so — and so she stopped responding to their emails.

After she re-engaged in September, GSAS launched an investigation that concluded this month without a formal hearing and found no violations of GSAS policies, according to an email obtained by The Crimson.

Emmeline and other graduate students familiar with her circumstances say her case is representative of many graduate students’ attempts to seek recourse for bullying, harassment, discrimination, and worse through the University’s internal channels. The Crimson granted Emmeline anonymity to discuss allegations of bullying and identity-based discrimination, many of which were corroborated by classmates.

Harvard Divinity School Student Association Council president Maya C. James said she saw certain administrators’ urges for Emmeline to move on as an implicit way of discouraging her from escalating the situation.

“At one point, she was told by an administrator, you should just put this behind you and focus on school,” James said. “And the way I translated that was, ‘Don’t bite the hand that’s feeding you — this Harvard degree — and don’t cause trouble,’ even though if anything, she was just trying to respond to the trouble that was forced upon her.”

In recent weeks, 140 people have signed a petition addressed to GSAS’s Office of Student Affairs calling for structural reform of current grievance-processing procedures, as well as an “immediate and fair” formal hearing for Emmeline.

“The actions of [Emmeline’s roommates] are in clear violation of the Academic Code of Conduct. Yet, they have not been held accountable through any of Harvard’s provided means of conflict resolution. There has been no hearing,” the petition reads. “Our student has suffered significant and lasting mental distress and financial harm as a result of the actions from the GSAS students, and has taken a medical leave of absence as a direct result.”

GSAS spokesperson Ann Hall wrote in an emailed statement that though the school is legally unable to comment on specific cases, it takes complaints seriously and students must follow conduct expectations outlined in GSAS’s policies.

“GSAS takes complaints of discrimination and harassment very seriously and cares deeply about students’ wellbeing,” Hall wrote. “GSAS students are required to abide by the expectations for conduct outlined in GSAS policies and GSAS has an established disciplinary process to address complaints about student conduct.”

In written testimony she emailed to administrators in May, Emmeline said the last few months had been exhausting and irrevocably detracted from her first year of graduate school.

Emmeline traveled to Cambridge with high hopes for her first year. Those hopes, however, were swiftly dashed by her roommates’ behavior and subsequent attempts to implore administrators to remedy the situation, she said.

In the May written testimony, Emmeline outlined what she saw as verbal bullying, xenophobia, and identity-based discrimination by her roommates between January and May. In one instance, for example, she alleges one roommate questioned Emmeline’s medical credentials because her medical degree is from a country in the Global South.

Following those interactions, Emmeline took a leave of absence, citing declining mental health. After leaving her meeting with administrators on July 1 disillusioned, she stopped responding to their follow-up emails, in which they had offered to look further into the matter. The next month was when Emmeline unsuccessfully attempted suicide.

She re-connected with administrators in September, giving them permission to interview her roommates about the allegations. Bersola informed her by email on Nov. 5 that the GSAS Faculty Board had not found sufficient evidence that her roommates had violated the school’s policies, and that the Board would not move forward with a formal hearing.

Divinity School Muslim Student Association president Xavier I. Sayeed said it was difficult to observe Emmeline’s visible decline in mental health during the months she liaised with administrators.

“To see someone experience something that makes them distrustful and want to withdraw themselves from the community is really heartbreaking — and especially in this case, somebody who was such a force of joy and passion,” Sayeed said.

“She’s had to drop out of school for one semester, take a leave of absence,” Srikrishna said. “Everything about her life has been disrupted.”

Srikrishna alleged GSAS’s determination that Emmeline’s roommates had not violated any GSAS policies runs counter to its stated commitment to inclusivity and addressing interpersonal harm.

‘It Is a Purgatory Out There’

For James, the HDS Student Association president, one of the most alarming parts of helping Emmeline through the process was learning that Emmeline’s experience was not a rare one.

“While she was speaking with different people, they were like, 'almost your exact situation has happened multiple times before,'” James said. “A big part of it is: Why is there an institutional memory of all of this harm happening in the exact same way to people with very similar identities, and why is there no institutional memory of repair from that? Again, it doesn’t make sense.”

Others who sat in on Emmeline’s meetings with administrators disputed GSAS’s decision not to grant her a formal hearing.

Noor I. Traina, who attended a meeting between Emmeline and University Chief Diversity and Inclusion Officer Sherri A. Charleston on Tuesday, said Charleston told Emmeline that the University had exhausted the institutional channels it could use to address her complaint. Traina said she disagrees.

“She has 25 pages documenting exactly what happened to her — with Harvard students,” Traina said. “They violated a Code of Conduct the University obliges them to agree to.”

The GSAS Code of Conduct states that any form of discrimination on the basis of factors including race, religion, and national or ethnic origin is “unlawful” and counter to Harvard policies.

Bullying is not covered by Harvard’s Title IX procedures unless it is found to involve gender- and sexual-based harassment. Following student activism on the issue, particularly from Harvard Graduate Students Union-United Automobile Workers, the University launched three working groups in January to review policies on behavior that falls outside the purview of Title IX, including bullying.

In an interview, Emmeline said her conversations with multiple administrators revealed that they, too, recognized the lengthy and exhausting process of seeking recourse through existing University channels.

“What really surprised me was seeing how many other people in the administration warn you about this, which is deeply symptomatic of the problem,” she said. “This is basically evidence that they all know that it is a purgatory out there — it’s a limbo.”

‘A Lot of Dead Ends’

Azani A. Creeks, who serves on the Divinity School Student Association, said she believes that in order to help students like Emmeline, the University must address systemic deficiencies in existing policies.

“I think that a lot of these structures were put into place in order to be difficult,” she said. “That’s not to say that administrators who work on these processes now feel that way or won’t want to help students — I just think that the existing bureaucratic structures are meant to limit and discourage complaints.”

Creeks also pointed to the fact that the lengthy processes involved in reporting instances of harm may discourage students from engaging with the process altogether.

“You have to relive your experience and recount your experience over and over, telling different people just to be pointed to another person after you tell them everything you’ve experienced,” she said.

James said she witnessed Emmeline being bounced between administrators in such a way, leaving Emmeline feeling discouraged and unaccounted for.

“I was there with her while she was proposing emails or sorting out who she would talk to next,” she said. “It was a lot of dead ends, silence, and passiveness — I think passiveness was the worst part of it.”

Emmeline said that though she was unsurprised by GSAS’s assessment that her roommates had not violated any GSAS policies, she was disappointed nonetheless.

“I was very sad to hear it, but in a way I was also relieved, because that basically meant that there was nothing to hope for,” she said. “They had me hoping for the longest time that maybe if someone actually serious looked at it, they would see that I was harmed, and actually do something about it.”