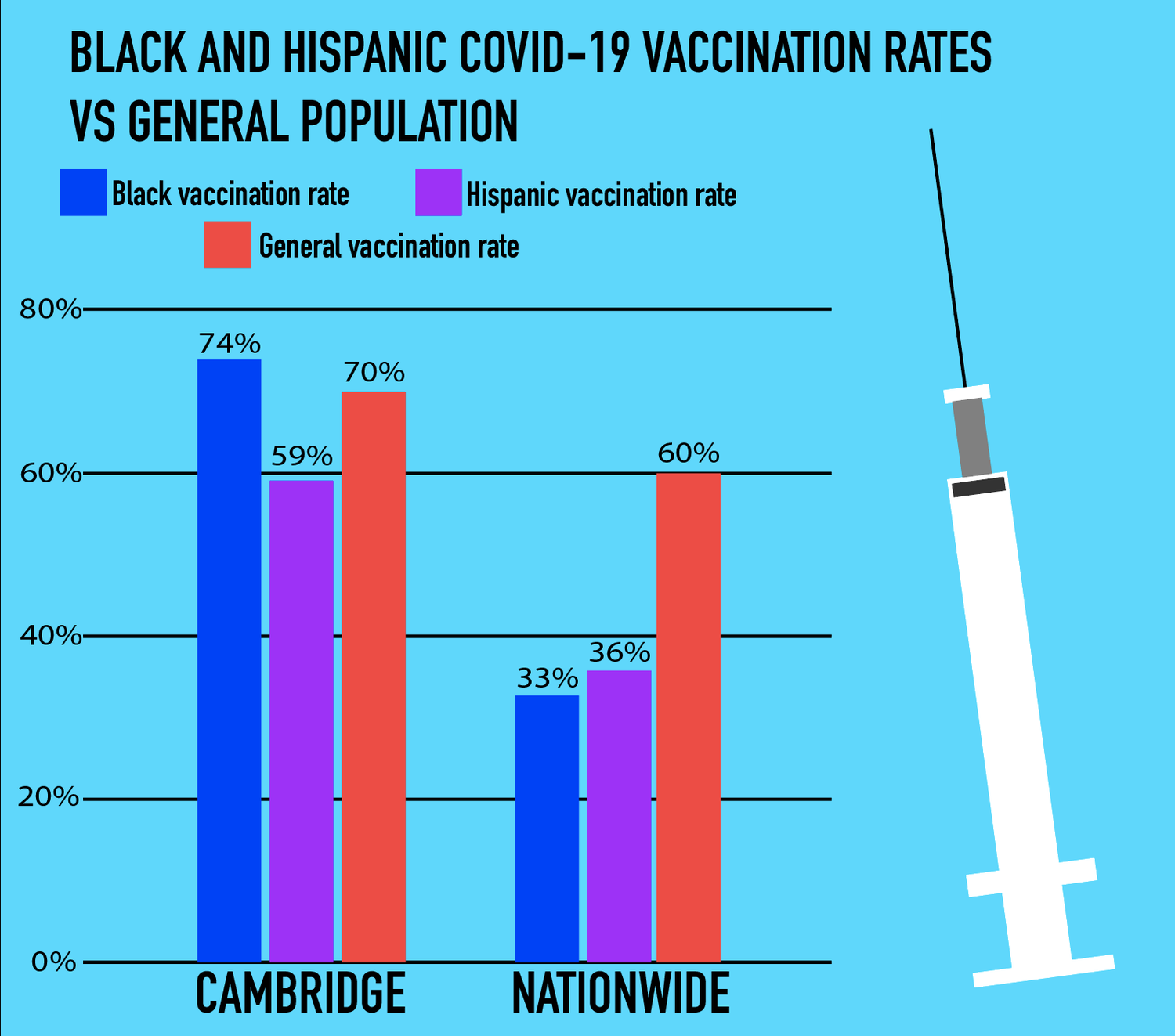 “There’s been a history of folks of color being used as guinea pigs,” said longtime Cambridge resident Yvonne L. Gittens, describing her original reluctance to get the Covid-19 vaccine.

Gittens — who recently received her booster shot — got vaccinated in March at a grassroots vaccine clinic at the Cambridge Community Center, where she teaches cooking and lip balm making, among other specialties, to young girls.

Reflecting on Cambridge’s vaccine rollout, some community leaders said these grassroots clinics have been instrumental in providing information about Covid-19 and easy access to vaccines to Cantabrigians of color, both young and old.

Some residents also explain that Cambridge’s high vaccination rate can be attributed to efforts made by the City, including its push to set up local vaccine clinics and mandate vaccines for Cambridge public school students.

Tony Clark is the president of the Cambridge chapter of My Brother’s Keeper, a national organization that serves young people of color. MBK’s vaccination strategy centered around education, which enables residents make informed decisions on their own, per Clark.

“I don’t think it was a radical thing that we did. Part of it was that we just gave folks information about the vaccine. And we also were able to say, ‘Look, we understand the anxiety. Some of us have it as well,’” Clark said.

In addition from providing information, MBK worked to ensure residents also had convenient access to vaccines.

In spring 2020, MBK ran two vaccine clinics at the Cambridge Community Center with Wayne J. Altman, a professor at Tufts School of Medicine and a doctor at Arlington’s Family Practice Group.

Altman said he experienced a “community grassroots feeling” at the vaccination clinics. On their way out, some attendees shared that they planned to encourage friends and family to get vaccinated, he said.

“What was interesting was when people were leaving, they told the staff at My Brother’s Keeper, ‘I wasn't going to do this. I didn’t really want to get vaccinated. But then I heard about this event, and I trust the people at My Brother's Keeper,’” Altman said.

Clark said MBK originally faced some “pushback” from the City of Cambridge regarding its grassroots approach to vaccination.

“It’s real political, because they felt — some of them — that we need to tell people just to get the shot,” Clark said. “ And I was like, ‘Nah, that’s not what we do.’”

Still, City officials were “supportive and appreciative” of the clinics, per Altman.

Altman said he and MBK hoped to bring grassroots vaccination clinics to nearby cities, but they were sent a letter by the Massachusetts Department of Public Health to “cease and desist” their efforts.

“We were told that we were breaking the rule in terms of not being allowed to specify a group to vaccinate, and every vaccine effort had to be available to all citizens,” he said.

In an emailed statement, Cambridge Public Health Department spokesperson Dawn Baxter wrote that the department continues to do “extensive outreach” to residents of color. She cited that CPHD returned to the same public housing buildings multiple times to “educate and build trust” and conducted outreach in multiple languages.

In Cambridge Public Schools, where almost 40 percent of students are Black and Latinx, Cambridge School Committee officials like Ayesha M. Wilson have faced another vaccination frontier.

“There’s been a lot of hesitancy across the board,” Wilson said. “I think in particular in this age group, we’re not doing a really great job in terms of educating them.”

The 16 to 19 age group in Cambridge is just 49 percent fully vaccinated, making this demographic the least vaccinated of all eligible age groups in Cambridge.

Wilson said she believes much of the lag is coming from vaccine-hesitant parents because kids under 18 need parental consent to get vaccinated.

On Nov. 22, CPS will begin enforcing a vaccination requirement for all students wanting to participate in extracurriculars, which school officials hope will drive up vaccination rates.

Nuriel Vera-DeGraff, a vaccinated senior at Cambridge Rindge and Latin School, said there have been a “variety of responses” to the mandate.

Though Vera-DeGraff said he believes the mandate is a “good incentive,” he added that there are “students who are suffering” from the mandate due to vaccine-hesitant parents prohibiting their children from receiving the vaccine.

“These are young people who may want to participate in sports, so they’re having a bit of a challenge in that level of dialogue with their parents around,” Wilson said of the mandate. “Having those difficult conversations is also what I’m hearing is coming up for some of our young people.”

‘Not Going to Jump Through a Bunch of Hoops’

Executive Director of the Community Art Center Erin Muirhead McCarty said an unvaccinated parent she spoke to — who is struggling to find employment due to her vaccination status — occupies a “middle space” in the vaccination reluctance spectrum.

“[The parent] also mentioned that it’s not as easy to get the vaccines as it used to be — that she felt like there were more opportunities to get vaccinated earlier on,” McCarty said. “So if there are hurdles and challenges and obstacles that interfere in getting the vaccine, if it’s not easy for people who are in that middle space, it’ll be status quo.”

“They’re not going to jump through a bunch of hoops,” she added.

Gittens, the teacher at the Cambridge Community Center, said some of her family members still refuse to get the vaccine, even after her positive experience at the clinic.

One Black unvaccinated Cambridge resident, who requested anonymity for fear of retaliation from his employer, said he continues to harbor concerns about the vaccine, though he is not “totally against it.”

The resident said he believes some Black residents may continue to be hesitant to get vaccinated due to mistrust in the government stemming from previous unethical medical experiments.

He cited the Tuskegee experiment in which Black men were given syphilis by the Centers for Disease Control and were intentionally prevented from receiving treatment for the disease once a cure was discovered.

Local leaders said they will continue to work to spread accurate information about the vaccine to residents as the rollout of vaccines for the 5 to 11 age group is underway and booster shots become widely available to all.

Wilson, the Cambridge school official, said the City should prioritize education and promote messaging on the health benefits of the vaccine.

“We need to make sure that we’re really staying clear of ‘fake news’ and that we’re able to really hone in on the effectiveness, the importance around keeping ourselves safe and our community safe,” Wilson said. “And really go into a place of us as an individual in the larger society.”