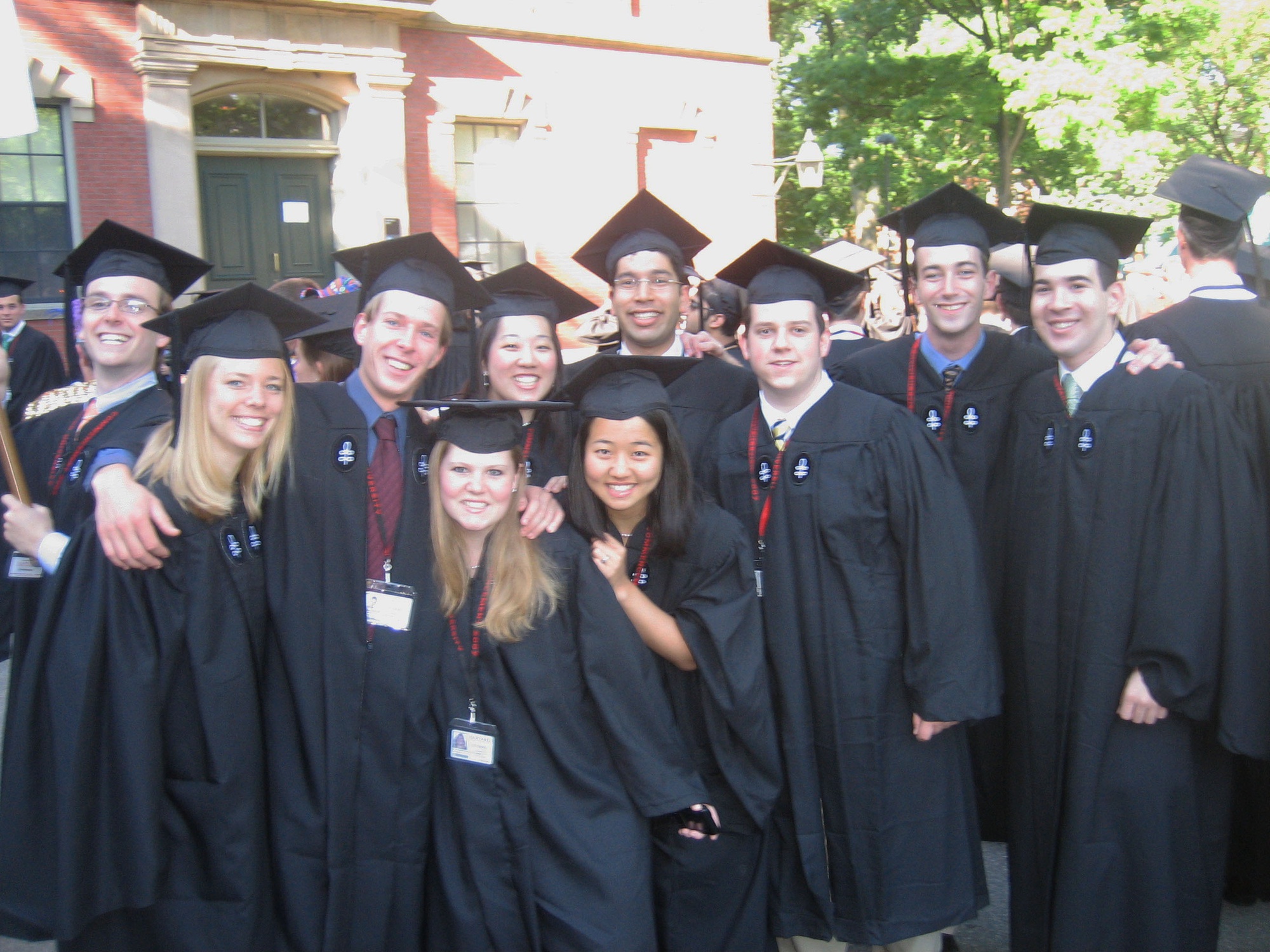 By Brandon L. Kingdollar, Crimson Staff Writer
Boston Mayor Michelle Wu '07, center, with her 10-person blocking group in 2007, the year she graduated from Harvard College. By Courtesy of Rolando Flores

It was move-out day at Currier House as the summer of 2007 began, and Michelle Wu ’07 was saying goodbye to the college that had been her home for four years — the weekend trips to Chinatown, her large and loving blocking group that filled an enormous 10-person suite, and a place she built the foundations for a career in public service.

Among those goodbyes was Rolando Flores ’07. Like Wu, he was a child of immigrants, his parents coming to America from Mexico. They were with him as he packed the last of his things and prepared to conclude this chapter of his life. For his mother, it was her first time on Harvard’s campus.

Flores had mentioned to Wu that his parents did not speak English. On that last day, she found the three of them amid a sea of boxes.

“I remember, in the middle of all the chaos, Michelle made sure that she walked over to my parents, introduced herself, made them feel welcome, and did it in perfect Spanish,” Flores said. “It meant a lot to my parents to have that.”

Fourteen years later, Wu would be sworn in Tuesday as the 56th Mayor of Boston, the first woman and person of color elected to the office, as well as the first Harvard College alum to serve as mayor in nearly 100 years. She carries to City Hall the same spirit of “welcoming,” as Flores calls it, that she had on that last day of college.

During her election night victory speech, she reaffirmed to the crowd that “all of this is possible” — in English, then in Spanish, then in French, and finally in Mandarin. In a tweet the day before her inauguration, she showed off her mayoral business card, featuring her title in twelve different languages.

“We are ready to become a Boston for everyone,” Wu said in her speech.

A daughter of Taiwanese immigrants born on Chicago’s South Side, Wu had never truly been away from her family before coming to Cambridge in August 2003. Her entire family — including her parents, and her three siblings — made the nearly 1,000 mile drive from Chicago to Harvard Yard in a minivan together.

“I remember just standing in Harvard Square as my family drove away, just crying and crying,” Wu said in a Boston University student forum this October. “It took a while to really feel like this new way of life and this new city was home.”

Fortunately, Wu arrived at Harvard already friends with roommates she’d spent the summer getting to know through an AOL Instant Messenger chatroom — including a woman who would become a lifelong friend, Elizabeth C. Likovich ’07.

In an email to The Crimson, Likovich reminisced about her first time meeting Wu in-person on move-in day.

“Our fathers commiserated about having to move their daughters up five flights of stairs,” Likovich wrote. “Her sister, Tori, was only six and had the cutest pigtails. We all doted on her.”

According to Likovich, she and Wu’s first stop after move-in was J.P. Licks, the ice cream shop — the pair’s first taste of Boston.

One of the earliest encounters Wu had with her future constituents was through the Harvard-Radcliffe Chorus, which, according to then-director Kevin Leong, featured vocalists from all across Boston and its surrounding areas. Wu sang soprano alongside not just Harvard students, but Bostonians from all walks of life.

“It could have been an important experience for a Harvard student to have that contact with the people in the community and the surrounding communities, and working on something like this which is musical and collaborative,” Leong said.

A crucial part of finding a home in Boston, Wu said at the student forum, were her trips to Chinatown as part of the Phillips Brooks House Association’s Chinatown Citizenship Program — a program she would eventually helm.

“It very quickly became a tradition that I would go from Harvard to Chinatown every single weekend,” Wu said. “We were teaching citizenship classes and volunteering and getting great food and getting to know the community.”

“By my second year, I knew this was where I wanted to stay and put down roots,” she added.

‘She Really Did Care’

Many classmates who met Wu during her time at Harvard described her in much the same way as Flores — welcoming and caring above all else.

Likovich wrote that Wu’s nature was “sweet, upbeat, and inclusive,” and that she had a “talent for shining a spotlight on everyone else.”

Wu quickly developed a reputation for that kindness and empathy in her freshman entryway, Canaday D. Geoffrey D. Kearney ’07, a member of her entryway, said she always struck him as someone who “radiated goodness.” Erik A. H. Sand ’07 recalled the study breaks her suite ran, which he said were some of the best in the entryway.

When she arrived at Currier House in her sophomore year, bringing along many of the friends she’d found in Canaday, she also brought her reputation for compassion.

Joseph L. “Joe” Badaracco, one of Currier’s House Masters — now called Faculty Deans — during Wu’s time at the College, wrote in an email on the day of her inauguration that he saw the same kind traits in Wu then that he does now.

“The Michelle we knew in Currier House is the same Michelle who will become mayor today – very bright, thoughtful, hard-working, and a great listener,” Badaracco wrote. “Her traits and talents make her an ideal leader for our cynical and polarized times.”

Flores, who joined Wu’s 10-person blocking group during their senior year, said she was always “encouraging” to him — particularly when he decided to learn the piano.

Wu, a pianist who performed a solo of “Rhapsody in Blue” at her own high school graduation, would often use the practice room in Currier and check on Flores’ progress when they happened to meet.

“I remember her checking in on me to see how my lessons were going and encouraging me to continue, and it was a nice touch,” Flores said. “It felt like she really did care and she had no reason to.”

Wu maintained many of these friendships long after leaving the College. She invited Flores and other friends to her wedding, which Likovich helped organize. Likovich described staying awake “well past midnight” with Wu to ensure that everyone who had RSVP’d late could come.

“Michelle took it all in stride,” Likovich wrote. “She didn’t get irritated or say it was too late to make the changes. It was more important to her to be welcoming to all than any personal stress.”

“That is Michelle in a nutshell - an incredibly hard worker and more focused on others than on herself,” she added.

Edward L. “Ed” Glaeser’s class Economics 1011a: “Microeconomic Theory” had a reputation among Harvard students. A Crimson article from the fall of Wu’s senior year describes the course as “either loved or hated,” with a “break-neck pace” and “impossibly difficult exams.”

Naturally, Wu decided to take it.

She had been an academic all-star during her time in high school, with a score of 1600 on the SAT and a composite 36 on the ACT. According to Glaeser, she was no different in college — he remembered her as a “very smart” and “extremely eloquent” student.

“I don’t remember anything about her that would have keyed to you, ‘Boy, this is a person who’s going to become the leader of a great city,’’' Glaeser said. “I would have thought she was either on the track toward getting a Ph.D. or becoming a superstar consultant.”

As for lessons Wu may have taken from his class, Glaeser said he’s “fairly amused” with one she didn’t pick up.Glaeser said he has a rule to avoid making direct public policy conclusions in his classes as “different perspectives get you to different things” — with just one exception.

“Literally, the one case I break that is about the dangers of imposing rent control,” he said.

Rent control is one of Wu’s signature campaign promises — though Glaeser said he considered “rigorous thinking” as well as “wisdom and a belief in the value of knowledge and evidence” to be among the most important lessons from his class, rather than any specific policy position, qualities he said Wu possesses in abundance.

She would bring her family back to Boston in 2010, when she enrolled at Harvard Law School. There, a contract law professor — future U.S. Senator Elizabeth Warren (D-Mass.) — helped draw her into politics, along with an internship under former Boston Mayor Thomas M. Menino.

In 2013, she was elected to an at-large seat on the Boston City Council.

In a May press conference, Wu called her time at Harvard “foundational” to everything that followed.

“There’s no way that I would be in this role if I hadn’t had so many doors opened through the incredible education that I’ve been able to experience, and the connections to community that started when I was at Harvard,” Wu said.