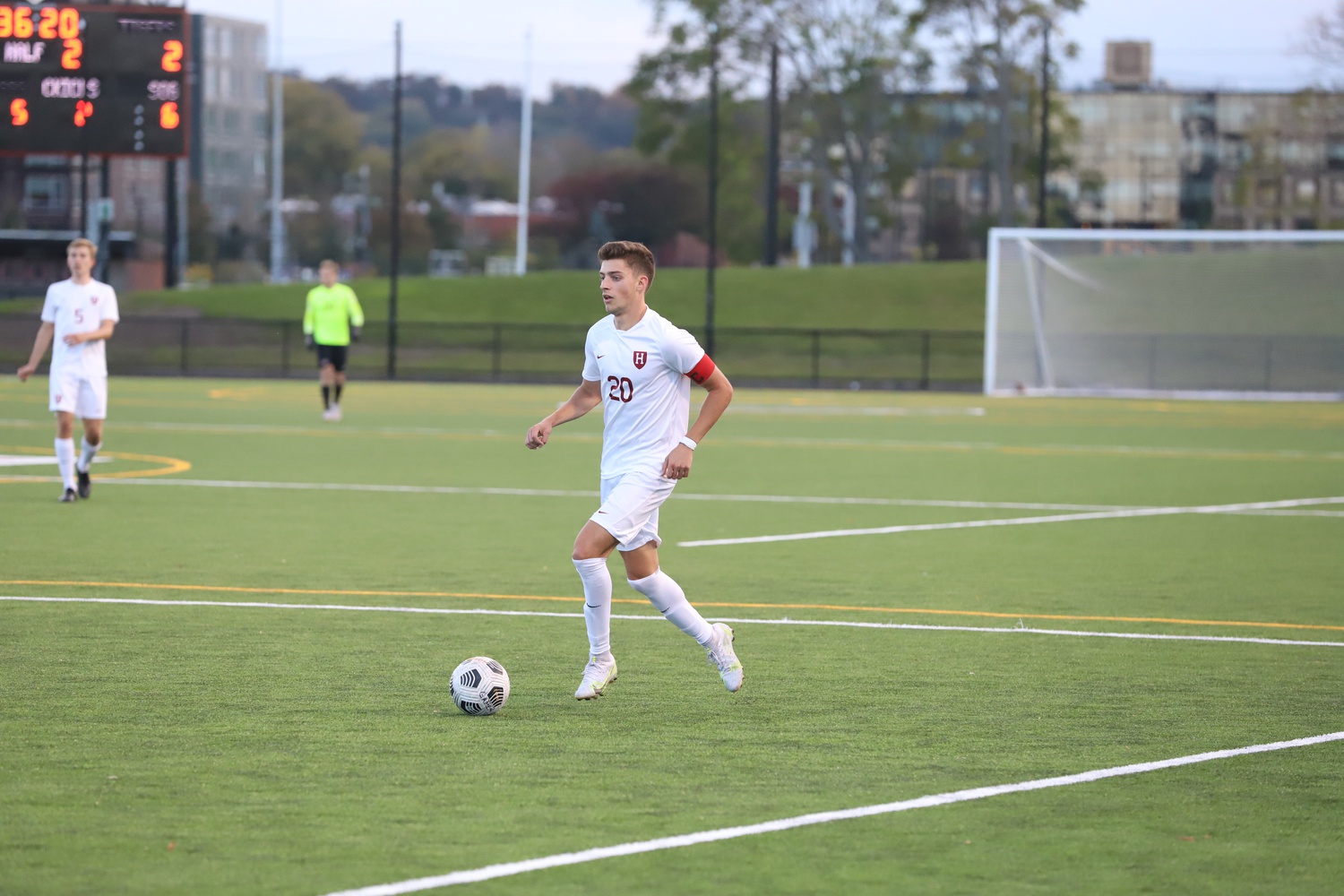 Senior Fernando Docters, pictured above against Princeton, played his final game in a Harvard jersey in Saturday's 4-1 win over Penn. By Owen A. Berger
By Eamon J. McLoughlin, Crimson Staff Writer

Harvard put on a show for its home fans on senior day, cruising to a 4-1 victory over Penn to secure its first winning Ivy League season since 2016.

Harvard (8-5-3, 3-2-2 Ivy) honored eight seniors with a pre-match ceremony, all of whom notched minutes on the afternoon. Penn (7-6-3, 1-4-2 Ivy) tried to play spoiler in the game and initially boasted a loud contingent of fans, but the Quakers were quickly quieted by the events of the game.

“It feels incredible to share it with 29 guys who I can call my brothers,” said captain Ferrnando Docters of the senior day celebrations. “It’s been a heck of a season — much improved since 2019 — and I'm really looking forward to the future these guys have.”

The Crimson entered the game as the second-best offense in the Ivy League, second in goals (1.71) and assists (2.20) per game, with its young defense not always able to match the high standard set by the offense.

Harvard opened the scoring early, with junior forward Martin Vician getting on the end of a cross from senior midfielder Cornelius Bencsik in the sixth minute. The goal marked Vician’s third straight game with a goal, and his seventh goal of the season.

The Crimson doubled its lead in the 14th minute, with first-year forward Alessandro Arlotti grabbing his team-best ninth goal of the season. Arlotti was found at the back post by sophomore midfielder Willem Ebbinge, whose looping left-footed cross was finished after being taken down by the forward at the far post. The assist was Ebbinge’s 10th on the year, who finishes the season fourth in the NCAA in assists per game with 0.67.

Early on in the second half, Vician gave the home fans a treat with a spectacular volley which put Harvard up 3-0. In the 48th minute, first-year defender Ludovico Rollo launched a long ball from his own half towards Vician, who volleyed the ball with his first touch out of the air, with the ensuing shot flying into the top corner, for his second of the game and eighth of the season.

“I don’t think I’ve scored a better goal than that in my life,” Vician said of the strike. “It was really once in a lifetime. I just saw a nice ball from Ludo, I ran in behind and tried to finish it one time. I’m just happy the goal helped the team and that we won. It was an amazing last game for the seniors.”

Junior goalkeeper Oskar Nilsson was busy on the night, maintaining a shutout for 87 minutes on a series of good saves, but the Quakers were eventually able to get a consolation goal. In the 88th minute, Nilsson faced a shot in a crowded box following a corner, and saved in traffic, but the rebound was tapped in for 3-1.

Just over a minute later, the Crimson hit back, moving the ball wide to senior midfielder Nico Garcia-Morillo on the counter, who crossed to fellow senior midfielder Alex Debayo-Doherty, who finished at the back post with 18 seconds to play. The goal was the final touch of his collegiate career, which returned Harvard’s three-goal lead, ending the game at 4-1.

“The support really does mean a lot to us,” said Docters of the home fans’ impact. “It’s almost like having an extra guy out there on the field with us.”

The all-time series now stands 39-37-5 in the Crimson’s favor following the win. The win cemented Harvard’s fourth place finish in the Ivy League at 3-2-2, its first winning Ivy League season since 2016. The Crimson will return eight of eleven starters next season, including its top-three point earners in Arlotti, Vician, and Ebbinge.