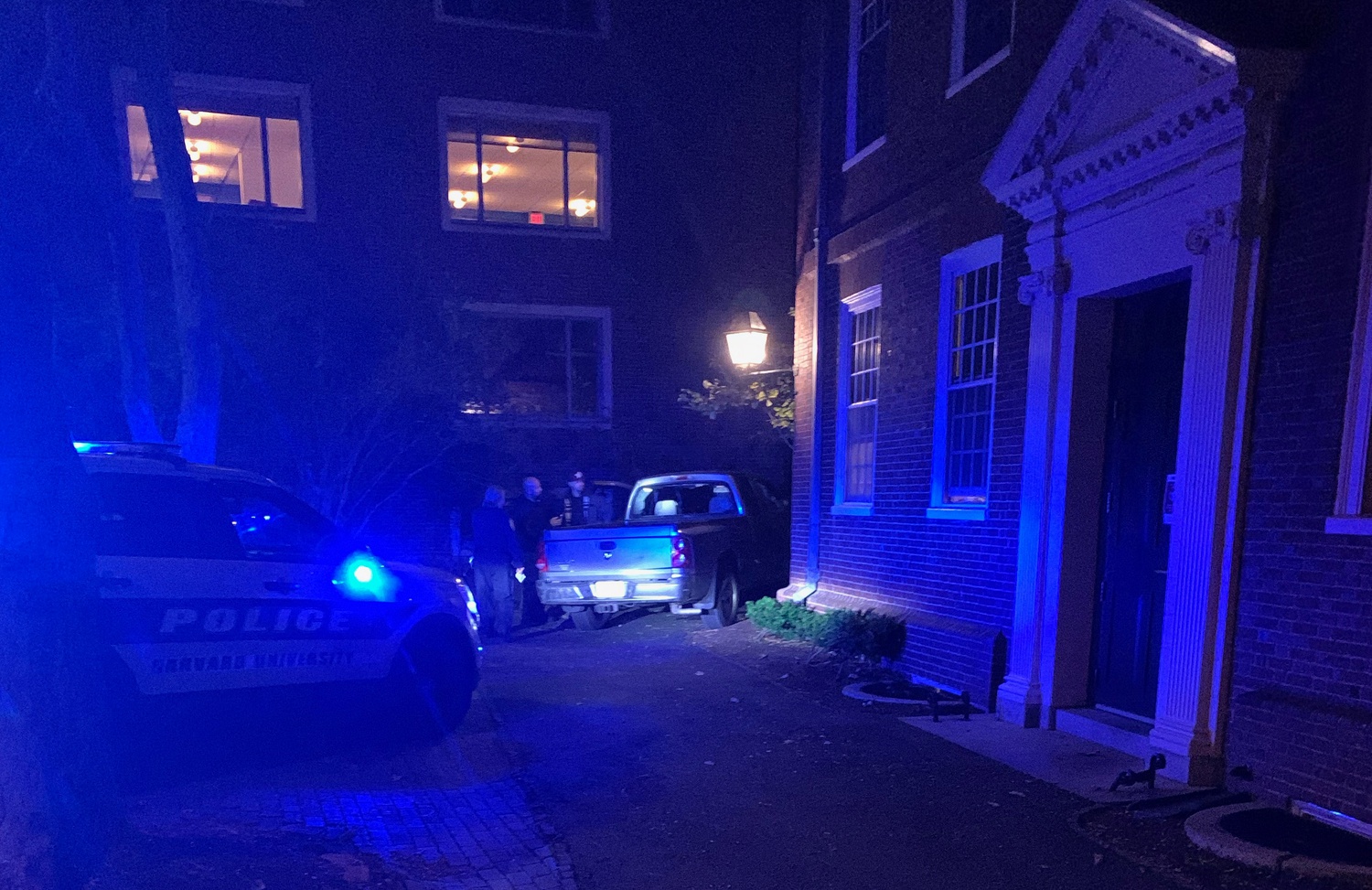 A man who “appeared to be under the influence” drove a pick-up truck into Harvard Yard Wednesday night, nearly striking several students before crashing into the edge of Lamont Library, according to Harvard police spokesperson Steven G. Catalano.

Brianna C. Turner ’23 said she was walking by Widener Library in a rush to get to a meeting at roughly 9 p.m. when she heard screams in front of her.

“There were headlights coming toward me, quickly,” Turner said. “So I ran up into the grassy area right next to Widener and this green truck drove past me.”

Though she was physically unharmed, Turner said she was “rattled" by the event.

Alexandria R. King ’24 said she was walking along Massachusetts Ave. when she heard a loud clang from across the street. King recalled seeing a truck in the Yard.

“I was like, ‘well, that's weird, cars aren't supposed to be over there,’” she said.

King said she walked into the Yard to assess the situation and noticed that a bollard by one of the gates in the Yard had been “ripped out of the ground."

“Within a minute, [Harvard University Police Department] pulls up, and you can see the truck in the corner over where Lamont and Wigglesworth meet, there's just an empty truck,” King said.

King said she saw a HUPD officer run up the Lamont steps, chasing the driver who fled the vehicle.

Catalano wrote in an emailed statement that multiple HUPD officers responded to the scene after receiving calls at around 9:10 p.m.

“Upon arrival, officers discovered a pickup truck with its door open. Several witnesses directed officers towards an unidentified male fleeing the scene,” Catalano wrote. “Officers pursued the individual, eventually stopping him to conduct a field stop.”

The driver, who is unaffiliated with Harvard, was arrested for trespassing and “several motor vehicle driving offenses," Catalano added. He will be arraigned Friday.

Both Turner and King said they felt anxiety that the event could be related to bomb threats reported last week at fellow Ivy League institutions, such as Yale, Brown, Columbia, and Cornell. Multiple buildings at all four schools were evacuated, and the campuses ultimately found the threats unsubstantiated.

“When the guy opened his car door and started to get out was when I started to run,” Turner said. “I didn't know it was a drunk driver. Now I know that, but I didn't know if it was going to be an active shooter or somebody else, so once I sensed that everyone around me was okay, it was time for me to get out of that area.”

University spokesperson Jason A. Newton wrote in an emailed statement Tuesday that the University and HUPD are continuing to “monitor the situation” regarding bomb threats at other schools.