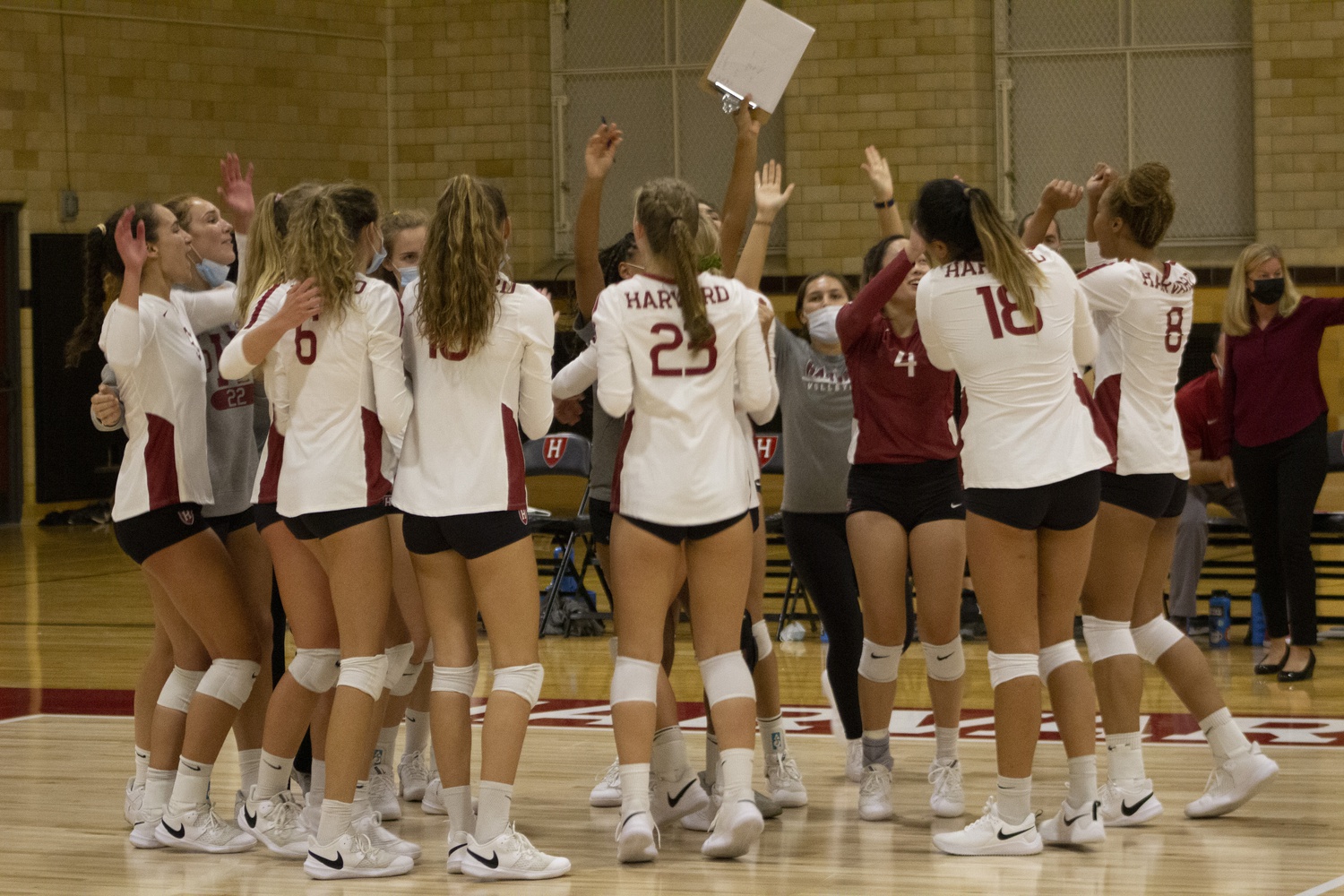 Harvard has a 2-1 record in Ivy League play after splitting a pair of closely contested matches over the weekend. By Aiyana G. White
By Maddie B. Barkate and Noah Jun, Crimson Staff Writers

This past weekend, Harvard (5-7, 2-1 Ivy League) traveled to Penn (4-8, 1-2 Ivy League) and Princeton (9-2, 3-0 Ivy League) for a pair of conference matchups, delivering a win against the Quakers on Friday and dropping a close contest to the Tigers on Saturday.

In Friday’s match, after a tie early on, the Crimson broke away, winning the first set, 25-13. The second set was a different story, however. Facing a 22-16 Penn lead, Harvard hit six kills to tie it up. Despite this comeback, a kill and a block by sophomore outside hitter Emerson Flornes eventually sealed the second set for the Quakers, 30-28.

During the second set, sophomore right side hitter/setter Ashley Wang went down with an ankle injury. Losing Wang, a standout player throughout the season thus far, was a huge blow for Harvard.

“It was a blur after that,” first-year libero Lindsey Zhang said. “We were scrambling to make adjustments.”

The Crimson did not waste time making those adjustments, as it did not lose another set, winning the next two 26-24 and 25-19. Sophomore middle hitter Olivia Cooper chalked the changes up to the team’s flexibility.

“[Assistant] coach Nick [Clark] said that Ashley would want [us] to play well without her, so [a number of players] stepped up and did a wonderful job,” Cooper said.

“At a certain point, we all came together and said, ‘no matter what, we need to keep fighting,’” Zhang recalled. “We were able to come back and gain a lot of momentum in that second set, even though we just lost by two points. I think the momentum we gained from coming back from that huge deficit in the second set really helped us in the third and fourth sets to close it out.”

Streaks characterized the third and fourth sets. In the third, the Crimson had to erase an early Penn lead until it could gain an advantage with a four-point run. First-year outside hitter Nicole Prescott then sealed the set with a kill. The fourth set went largely the same way, with an early 10-10 tie broken by a six-point streak by Harvard. Although the gap narrowed toward the end, a Crimson five-point run ensured Penn never got too close, and another kill by Prescott ended the match.

Zhang and Cooper both stepped up against Penn, with the former registering a team-best 20 digs and the latter serving a team-best two aces. Sophomore outside hitter Katie Vorhies continued her stellar season with 16 kills and five blocks, while junior right side attacker and co-captain Jaimie Rao and Prescott recorded 12 each. Defensively, sophomore setter Bella Almanza had 12 digs, which along with her 24 assists gave her her second double-double of the season, and sophomore middle blocker Ariana White posted a team-high eight blocks.

With its victory over Penn, the Crimson extended its win streak to four. However, the streak ended at the hands of a persistent Princeton squad. The teams traded sets to send the match into a fifth set sprint to 15 points. Although Harvard held a 12-8 lead, the Tigers snatched victory from the jaws of defeat, tying the score and then closing out the match, 15-13.

“In the first half of the [fifth] set, we went on a nice service run from [Rocky Aguirre],” Cooper said. “She served about four [points] in a row, but then we got stuck in a rotation that we had gotten stuck in a few times earlier on in the game.”

This challenge referred to Princeton’s junior setter Lindsey Kelly, whose serve proved troublesome for the Crimson.

“The momentum shifted, and we struggled to get it back,” Cooper said. “That was the difference. She had a great serve, she served well the whole match, and she [especially] served well in a clutch moment for them.”

Every set of the match was competitive. The first set started in gridlock as the two squads traded points until they both crossed the halfway mark at 13-13.

Then Kelly stepped up to the line.

Her serve gave the Tigers an eight-point run before Harvard, reeling from the loss of Wang the previous day, could stop the bleeding. Although the team fought back in its attempt to save the opener, this streak proved too much. Princeton took the first set, 25-20.

As has often been the case this season, the Crimson had to play from behind. The team under head coach Jennifer Weiss, however, has also shown its ability to adjust.

“We switched our rotations around, trying to give them a different look,” said Zhang about Weiss’s strategy going into the second set, “especially since [Princeton’s] blockers were doing really well.”

With the Tigers facing different Harvard hitters, the Crimson jumped out to an early 7-0 lead. On Saturday, three hitters contributed 42 of the team’s 63 kills, as Vorhies tallied 19 kills, Prescott hit 12, and Cooper recorded 11. Although Princeton clawed its way back from this deficit, Harvard held onto the reins, narrowly edging out the second set 26-24.

In the third, however, the Tigers regained control, starting with a six-point run and a 12-4 lead. The Crimson never fully recovered, eventually losing 25-16. The team thus found itself one set away from defeat, but Harvard was not to be deterred.

“We showed in the second and fourth set … that we were resilient and wouldn’t give up that easily,” Zhang commented. “We were able to battle through and push for the fifth set and not let any mental mistake affect us.”

Although the beginning of the fourth set was closely contested, the Crimson pulled ahead as Cooper had a long service run that gave the team the momentum to lead 17-10. The Tigers gradually closed this gap, but Harvard hit its way to a 25-19 claim on the fourth set and sent the match to a decider before ultimately falling.

The Crimson has its work cut out for itself against its perennial rival, Yale (9-3, 2-1 Ivy League), and a fierce Brown squad (10-3, 3-0 Ivy League). Harvard is especially looking to cut down on the frequency and duration of the runs it allows its opponents. Mental toughness, as was the case after Wang’s injury against Penn, will also help the team in closely contested sets. Finally, communication and improving chemistry on a particularly young Crimson squad will keep it competitive as it heads into the depths of conference play.

“I feel excited about that loss [to Princeton],” Cooper said. “I think it really showed us our ability to compete as a team, and it was a very promising loss to lose [that closely]. I’m excited for what that loss will ignite in us and how it will fire us up this weekend against Yale and Brown.”