Harvard Saw Decrease in Total Crimes and Sexual Assaults, Increase in Burglaries During 2020 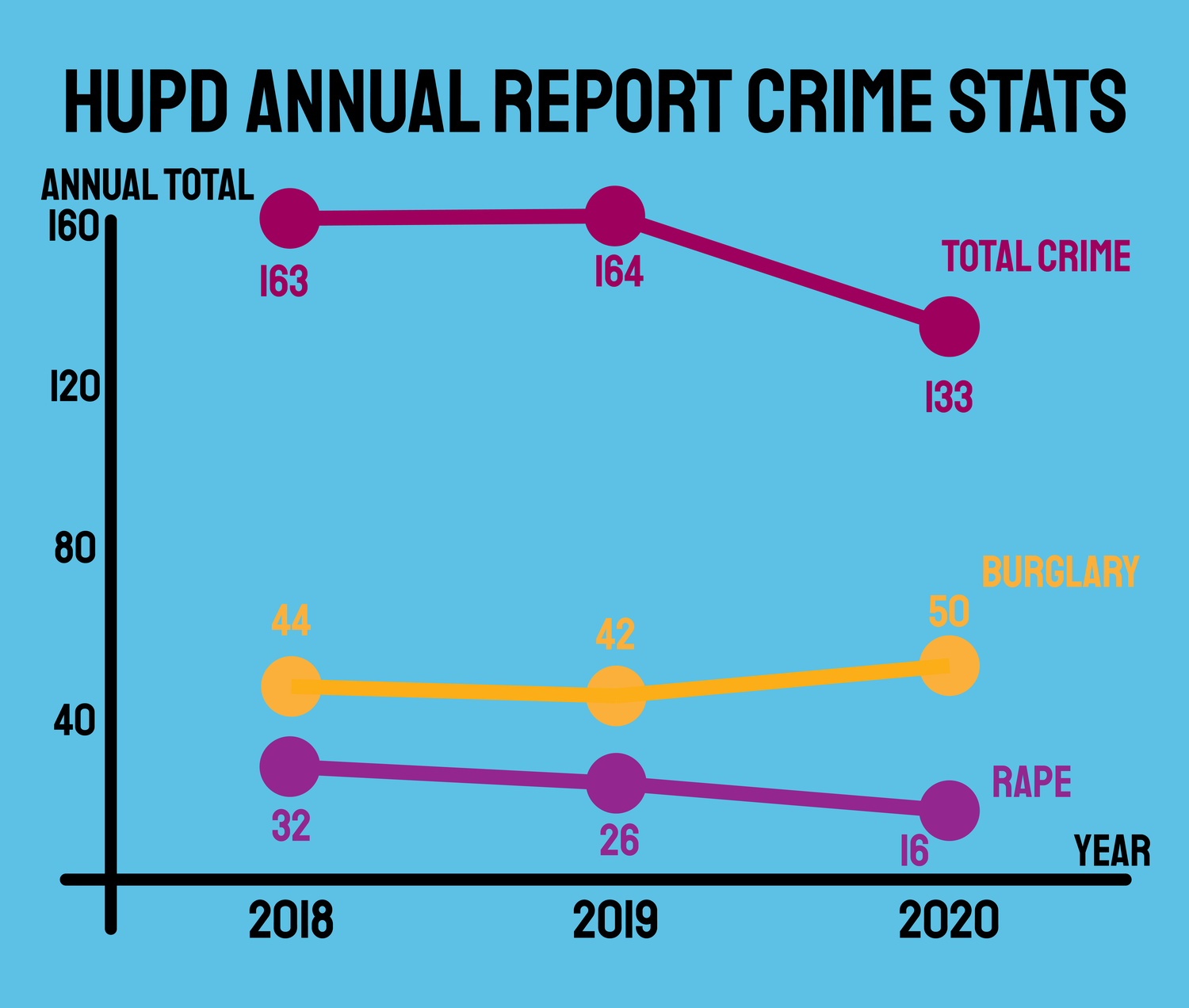 The University saw a decrease in the total number of crimes reported to the Harvard University Police Department. By Justin Y. Ye
By Raquel Coronell Uribe, Crimson Staff Writer

The University saw a decrease in the total number of crimes reported to the Harvard University Police Department, according to this year’s annual security report released Friday.

The total number of reported crimes in 2020 was 178, down from the 220 total crimes reported in 2019. On-campus crimes also saw a 14 percent decrease in 2020 — when college students were sent home in March, and only freshmen were invited to live back on campus in the fall.

HUPD spokesperson Steven G. Catalano announced the report in an email to affiliates Friday afternoon. The report, entitled “Playing it Safe,” is prepared every year in compliance with the Clery Act, which requires colleges and universities that receive federal funding to share an annual security report with affiliates every Oct. 1.

The report also must keep affiliates apprised of security policies on campus.

The report indicated a sharp decline in reported sexual assaults on campus. The number of rapes from 2019 to 2020 decreased by more than 38 percent. This follows a four-year trend of decrease in the reported rape incidence.

Other sex-based crimes, such as fondling, domestic violence, dating violence, and stalking also saw a decrease since 2019.

Aggravated assaults, however, increased in 2020, solidifying a three-year upward trend. Nearly all of the reported aggravated assaults occurred in public property that is within, adjacent, or accessible to campus.

HUPD’s new crime and workload dashboard, which was developed as a response to a 2020 external review, reveals that property crimes make up more than one in 10 of every part one offense — a type of crime against people and property defined by the FBI’s Uniform Crime Reporting program. Violent crimes, by contrast, constitute less than one in every 10 offenses.

The number of burglaries increased by more than 20 percent since 2019, breaking a pattern of decline in burglaries in the past five years.

While burglaries were reported with the most frequency to HUPD, larcenies — which do not have to be included in the annual Clery report — make up an even greater amount, composing 77 percent of the property crimes that occur on campus, per the police department’s dashboard.

While on-campus disciplinary actions decreased overall, drug law violations increased from nine in 2019 to 14 in 2020.

Overall arrests decreased nearly by half, and bias crimes decreased as well, going from seven in 2019 to only two in 2020.

Similarly to previous years, the vast majority of crimes HUPD recorded — nearly 90 percent — occurred on Harvard’s Cambridge campus, which houses the College and graduate schools such as the Law School and Business School. The other 10 percent of crimes were recorded in the Longwood Medical Campus, and for the first time in four years, at Harvard’s Arnold Arboretum near the Jamaica Plain neighborhood in Boston.

In addition to the Annual Security Report, the Harvard Environmental Health and Safety Department released a report on fire safety required by the Clery Act. The report showed that zero fires had been reported in all of 2020, a decrease from the four seen in 2019 and four more in 2018.