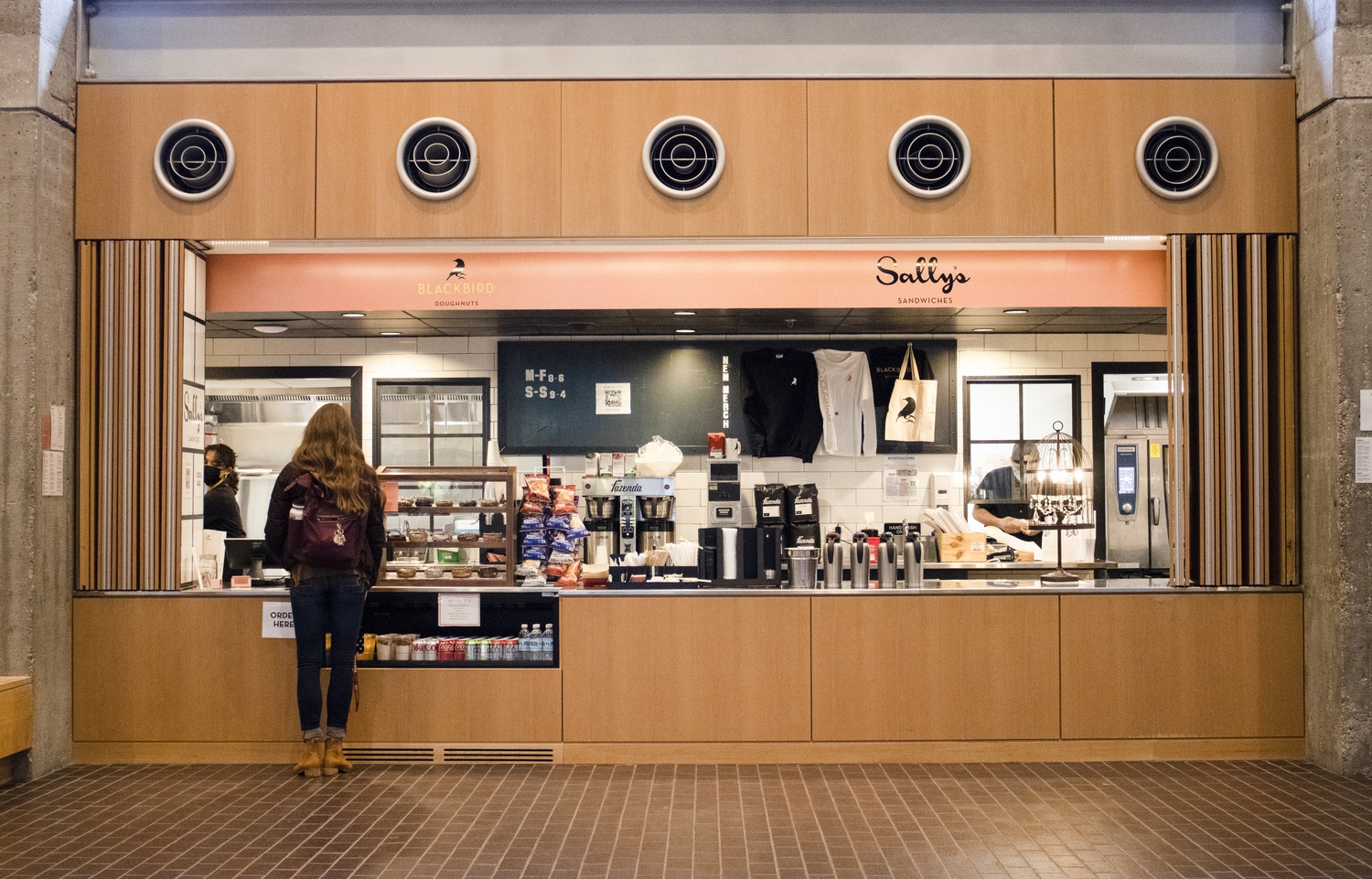 Sally's Sandwiches opened earlier this month in the Smith Campus Center in a combined storefront with Blackbird Donuts. Both stores are operated by the Gallows Group, a local restaurant group. By Angela Dela Cruz
By Tracy Jiang and Davin W. Shi, Crimson Staff Writers

More than a year after Covid-19 forced Blackbird Doughnuts to close, the artisanal donut shop has returned to the Smith Campus Center with a savory surprise in tow: Sally’s Sandwiches.

On top of its donut menu, the combined store now offers a variety of sandwiches, tacos, salads, grain bowls, and soups.

The shop is located within the remodeled arcade, in a space previously occupied by vegan cafe Whole Heart Provisions.

It is the sixth location for Blackbird Doughnuts and the second location for Sally’s Sandwiches — both of which are operated by the Gallows Group, a local restaurant group.

Elena Todisco, managing director of the Gallows Group, said it took eight weeks for the store to settle into the space.

“We really just brought in some new kitchen equipment, and we redesigned the storefront, the guest-facing aspects of the store,” she said.

Todisco said the store hopes to be “as original and as fresh” as possible.

“The difference between us and a lot of locations in Harvard Square is that we are not a big chain, especially for Sally’s,” she noted.

“We’re independently owned,” she said. “We aren’t corporate, so we have the ability to do a lot more interesting stuff.”

Matthew J. Su ’23-’24, who recently returned from a gap year, said he enjoyed going to Blackbird Doughnuts in his freshman year.

“They’re gourmet doughnuts, so obviously they’re going to be more expensive than regular doughnuts, but they tasted good,” he said.

Su added that he was also excited to sample Sally’s Sandwiches.

“I’ve actually never been to Sally’s Sandwiches, so I’m looking forward to trying it,” he added.

“They’re kind of pricey. Comparatively, I think even Starbucks doughnuts are cheaper, which is saying a lot,” he said. “They seem all right, pretty middle-of-the-road doughnuts.”

Todisco said the company aims to be “as reasonable” as they can be with prices.

“Based on what’s happening globally with supply chains, we’re doing the best we can to keep everything as reasonably priced as we can for the student population, because we know that that’s obviously our main demographic here,” she said.

Grace A. Yeboah-Kodie ’22 said she liked the “convenient” location of the store and enjoyed a breakfast sandwich that she ordered there.

“I have a friend who is always talking about how there’s no places to get good sandwiches in the Square, so I’m hoping to go with her to see what they have,” she added.