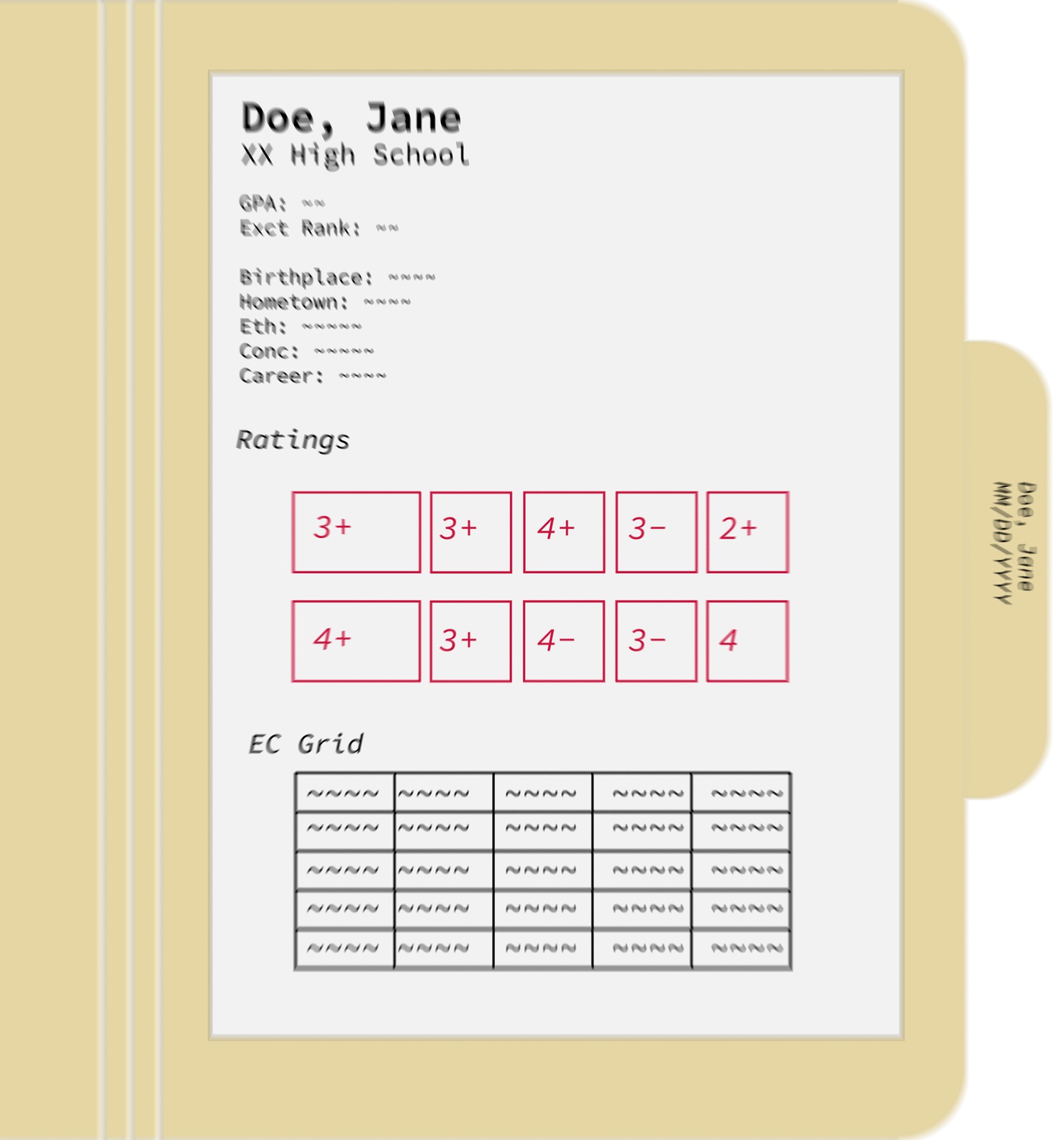 Students in the class of 2025 recount the experience of viewing their admissions files and getting a glimpse into the highly-controversial inner workings of the Harvard admissions office.
By Kelsey J. Griffin and Brian S. Ham

As an all-time record 1,965 students walked through the gates of Harvard Yard to join the class of 2025, a single thought ran simultaneously through many of their heads: How did I get here?

“People go their entire lives asking that question about why they’re deserving of certain things,” says Ethan C. Kelly ’25. Until 2015, Harvard students had largely been left in the dark as to how they beat the low odds — which defining life experiences captivated the admissions reader perusing tens of thousands of applications? This all changed in 2015 when, inspired by Stanford students who realized they could invoke their FERPA rights to view their admissions files, Harvard students began to submit file viewing requests en masse. Combined with a lawsuit against the University’s affirmative action policies that revealed the meaning behind previously mysterious numbers, the veil was finally lifted on the admissions process.

Regardless of its legal implications, exposing Harvard’s secret formula has created a tantalizing proposition for students that can take the form of a Pandora’s box, a cure to impostor syndrome, and anything in between. “I’ve heard horror stories of people requesting to view their file and then they're like, ‘This kid sucks but we’ll take him, I guess,’” says Dan J. Ennis ’25, who recently viewed his own file, with a laugh.

For some students, the file acts as a tangible reminder of why they made it through the gates of Harvard, demystifying a decision that shapes their next four years and beyond. Impostor syndrome is common for big fish who find themselves in an even bigger pond, and learning how they got here can be invaluable affirmation. While the file attempts to quantify one’s future success at Harvard through a series of numbers and evaluations, it also acts as a time capsule of the past 18 years — a retrospective review of one’s efforts, almost like a checkpoint for college students.

“There’s now a concrete reason as to why you’re here,” says Ray D. Noh ’25, recalling the experience of peering at his file. “By knowing how and why they chose you, what light they saw you in, it’s not luck anymore.”

But for many other students, seeing an entire decade of their lives distilled into a series of numbers can be a surreal or contentious experience. In an admissions process often touted as “holistic,” the quantitative side of the file presents a stark contrast, providing metrics for applicants to compare themselves to others. While most Harvard applicants have loaded their résumés with extracurriculars and stellar grades, their numerical rankings for each of the categories considered in the application — including extracurriculars, academics, and athletics, among others — may differ significantly from those of their peers. Syd D. Sanders ’24 recalls a wide variation between scores among his roommates, noting, “We know we're all smart, and we know we all did a lot in high school, and we have different numbers for different things.”

Calvin S. Osborne ’25 chose to focus on the qualitative components of his file. “The words were a lot more impactful than the numbers were,” he says, noting that complimentary comments such as “passionate” or “truly unusual” left a much greater impact than the numbers.

Naomi Bashkansky ’25 had a similar reaction to her admissions file. “I just saw a lot of support from the readers, as well as little quotes from my teachers’ recommendations that were all super supportive,” she recalls. “And that's compounded by the fact that very recently, I had a realization that a lot of my ambition stems from me wanting to make people proud to have known me and, well, there you go.”
This type of information in an admissions file can help students understand that they do indeed belong at Harvard. Brett N. Kim ’25 says that viewing his admission file “really just validated me and those areas that I want to continue growing.”

But not all students receive the confidence boost they were expecting. Sanders says he found common ground with his interviewer discussing the apparent lack of diversity in their rural Maine town. While Sanders shared his experience as a transgender teen, his interviewer relayed his experience as an Asian American living in the predominately white town. Both agreed that their place as minorities caused neighbors to view them as their “labels instead of as human beings.” This shared impression did not carry over to Sanders’ admission file, however, he says.

Rather than highlighting Sanders’ academic or personal achievements, the interviewer zeroed in on his transgender identity. Nearly all the comments jotted down in the file centered on his physical appearance — mentioning retained “feminine characteristics” in his posture and facial features — and wondered how future roommates and classmates would see him. Sanders points to the irony of his interviewer’s hyperfocus on identity while writing that Sanders “does not define himself primarily as a trans-gender person, but sees that as just one aspect of his total person,” according to Sanders.

Faculty of Arts and Sciences spokesperson Rachael Dane wrote in an emailed statement that the admissions office will investigate inappropriate behavior by alumni interviewers if brought forward by a student.

Despite being put off by his interviewer’s transphobic attitude, Sanders finds viewing the file did not hurt his impression of the University as a whole and would recommend more students seek out their own. Similarly, Kelly emphasizes that learning what made him deserving of a seat in Harvard’s classrooms was reassuring. “[Students] don’t view it, in many cases, that [they] are worthy of going to one of the best universities in the world,” he says. Transparency in the school’s decision to pick you out of the ever-growing stack of applicants can be a crucial step in finding that self-worth, he explains.

It might require thick skin for a student to find out their interviewer or admissions officer had doubts about their qualifications, warns Ennis. Daring to peer inside an admissions file may expose negative comments as well as positive ones.

Yet, for some, like Bashkansky, viewing an admissions file can open the door for future growth, whatever it may contain. “Whether I’d be excited or disappointed,” she says, “I always like to seek the truth.”