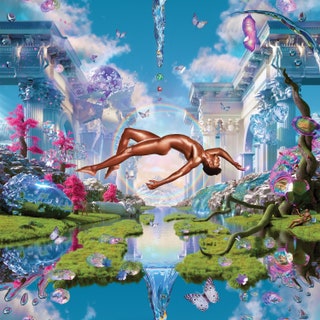 Since the 2019 release of his record-smashing debut track “Old Town Road,” Lil Nas X has cemented himself as a pop culture mainstay thanks to his bold red carpet looks, creative music videos, humorous personality, and more. However, his rise to fame has not been an easy one. Since coming out as gay around the release of his first EP, Lil Nas X has faced persistent backlash from those who take offense to a confident queer Black man exhibiting pride in his sexuality. Unfortunately, it seemed as though the fear of persecution that prevented Lil Nas X from coming out for so long was being realized in a truly upsetting manner. The time for Lil Nas X’s bold response was imminent. Enter “MONTERO,” Lil Nas X’s debut album of reclamation, released Sept. 17. After spending recent years dealing with homophobic attacks, Lil Nas X finally takes back all the power society has stripped from him, a mission that is evident in the album’s meaningful lyrics, inventive sonic composition, and overall aesthetic.

The first track of the album, “MONTERO (Call Me By Your Name),” is the song with which listeners are likely the most familiar. By choosing to start his record with this controversial Billboard number one hit, Lil Nas X sends a clear message: If this song makes you uncomfortable, then you should leave before the album gets started. Lil Nas X refuses to cater to his critics, a theme which he establishes early and continues throughout the album. Sonically, this song’s steady clapping beat and melodic guitar are infectious, hooking listeners from the very opening seconds of this album. Moreover, the centrality of the word “name” to the song’s lyrics calls attention to the fact that by using his birth name as the title for the album and this song, Lil Nas X is even going as far as to reclaim the power in his own name. This simple show of confident autonomy is a rather inspiring dimension of the work.

After this bold, unabashed introduction, Lil Nas X shifts gears to include songs that examine the deeper emotions that are not necessarily apparent in the artist’s often light-hearted exterior. For instance, in “THATS WHAT I WANT,” Lil Nas X confesses that “These days, I’m way too lonely/ I’m missing out, I know/ These days, I’m way too alone.” Such stark honesty about his isolated mental state and ardent desire to be involved in a healthy, loving relationship is a welcome change from the lighter fare that Lil Nas X usually sings about in songs like “Old Town Road.” However, Lil Nas X does not content himself with simply wallowing in self-pity, instead using his forceful, almost shouting voice to simply tell us, “I want someone to love, that’s what I fucking want.” Let there be no mistake, this album is all about what Lil Nas X wants, not what his fans or haters may demand.

This motif of deeply personal lyricism continues throughout the work, but is nowhere more noticeable than in “SUN GOES DOWN,” a song about Lil Nas X’s suicidal thoughts. While discussing his struggle to come to terms with his intersectional identity as a Black gay man, Lil Nas X lets listeners know just how severe his pain was, saying, “I wanna run away/ Don’t wanna lie, I don’t want a life/Send me a gun and I’ll see the sun.” The brave choice to speak on these serious matters allows Lil Nas X to gain some retroactive control over such a troubling time in his life, also allowing listeners to connect with the artist on a deeper level that makes the album all the more impactful. As opposed to his usual focus on beat-heavy production, this stripped-down song focuses heavily on Lil Nas X’s surprisingly smooth and moving vocals.

“Montero”’s aforementioned departure from Lil Nas X’s typical subject material is punctuated by many surprising choices he makes with regards to the work’s auditory composition. While most may think of Lil Nas X as just a pop rapper, this simplistic outlook is quickly contradicted by the angsty, punk rock sound of “LIFE AFTER SALEM.” On this track, Lil Nas X shouts out lyrics while backed by a vivid electric guitar and the clash of drums. And as if this song wasn’t enough to convince listeners of his versatility, Lil Nas X immediately follows it with “AM I DREAMING (feat. Miley Cyrus),” a much slower tune featuring beautifully airy vocals and an intimate acoustic guitar backing. By deftly navigating between seemingly unrelated styles of music, Lil Nas X is practically bragging to the audience about his artistic range, and every second is highly enjoyable.

Beyond its inspiring theme of one person’s artistic reclamation of power, “MONTERO” is just plain fun. The collaborations with Miley Cyrus, Doja Cat, Megan Thee Stallion, and Jack Harlow are too good to pass up on. Try listening to the booming brass instrument opening of “INDUSTRY BABY (feat. Jack Harlow),” the album’s crown jewel, without instantly feeling your spirits lift. It’s impossible. Similarly, “SCOOP (feat. Doja Cat)” is one of the strongest songs on the album due to its incredibly catchy beat.

Ultimately, the only thing that this album fails to accomplish is provide an answer to this crucial question: Now that he has successfully won back all the power he once lost, what will Montero do next?