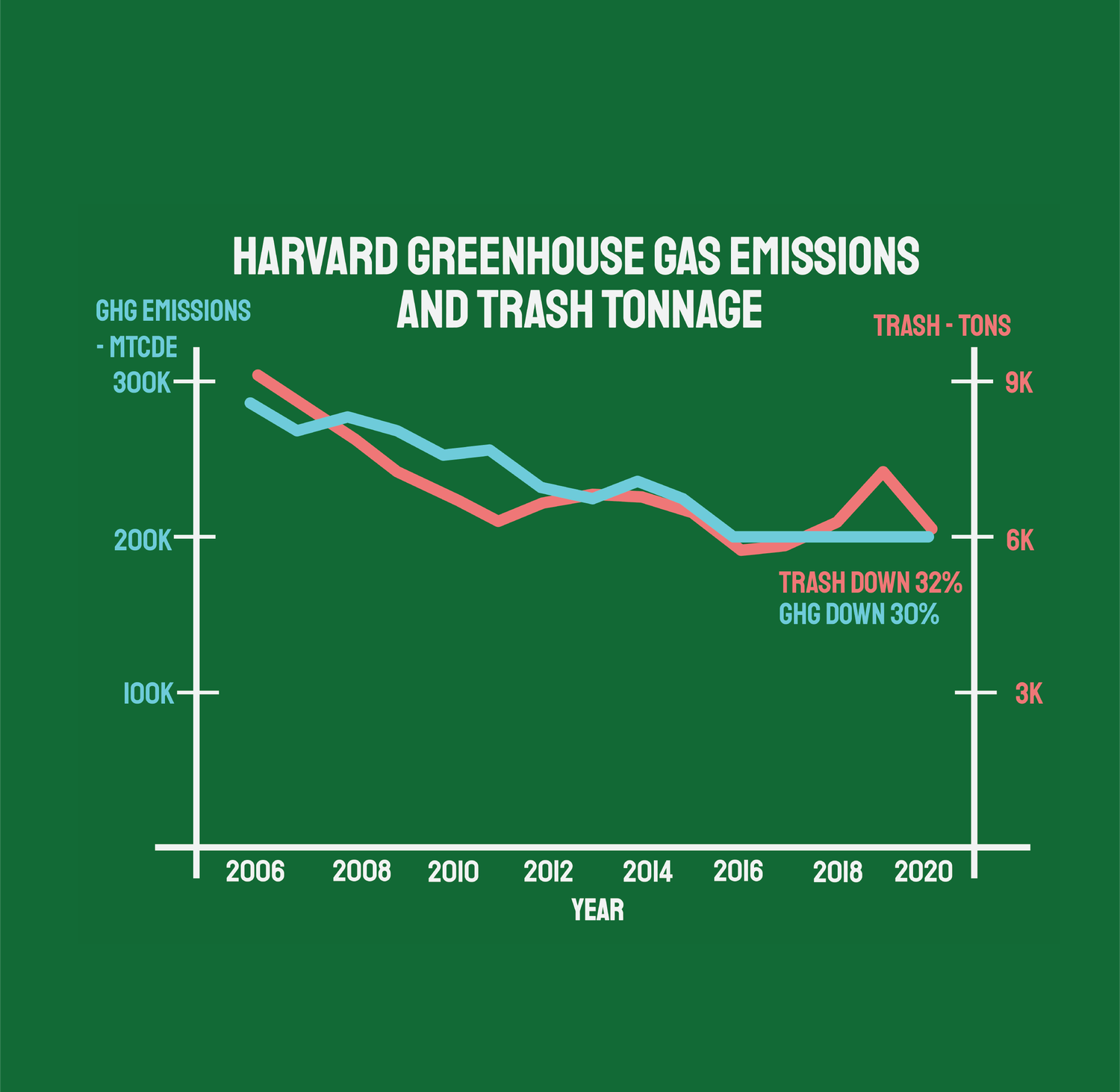 Though Harvard's campus emptied out due to Covid-19 last year, the University’s campus greenhouse gas emissions remained stagnant for a fifth straight year, according to preliminary data released Friday as part of the University’s 2020 sustainability report.

Harvard has pledged to become fossil fuel-neutral by 2026 and fossil fuel-free by 2050. But the school has seen no reduction in its emissions since former University President Drew G. Faust set the targets in 2018.

Still, school officials maintain that Harvard is on track to meet both goals.

“The University is on pace to meet its goals to be fossil fuel-neutral by 2026 and fossil fuel-free by 2050,” Heather A. Henriksen, managing director of the Harvard Office for Sustainability, wrote in a statement Monday.

To offset emissions, Harvard has also invested in offsite renewable energy, including solar and wind.

The school made steady progress between 2006 and 2016, decreasing emissions by 40 percent when factoring in campus growth. But emissions numbers have stayed flat ever since.

Julian Dautremont, the director of programs for the Association for the Advancement of Sustainability in Higher Education, said schools often see emissions plateaus as they pursue reductions after first taking care of “low hanging fruit.”

“It’s not uncommon to see some plateauing, and then there’s some larger-scale change that potentially folks have been working on for several years,” he said.

Last year, Harvard met most of the goals set in its 2014 Sustainability Plan, but fell short of reducing waste and water usage by its 2020 deadline.

The University pledged in 2014 to cut campus waste numbers in half by 2020 compared to a 2006 baseline, with the hope of eventually achieving zero waste production. In 2020, Harvard did see drastic reductions to its waste production — but the report acknowledged the data is largely due to campus de-densification and not representative of a trend.

Trash per-capita last year was 27 percent higher than the 2006 baseline. The report attributed this jump to “significant operational changes” required to implement public health measures during the pandemic.

Dautremont said the impact of the pandemic on campus waste has been mixed, with reductions due to de-densification at many schools being at least partially offset by an increase in disposable products, such as masks.

The University’s 2019 sustainability report blamed a “known infrastructure break” for its failure to meet the goal of reducing water use by 30 percent between 2006 and 2020. In 2020, water usage on campus was 36 percent lower than 2006 — water savings equivalent to filling Harvard’s Blodgett Pool 298 times.

The report pointed to the 14 percent cut in water use achieved by 2018 as “the most accurate” measure of its progress, acknowledging the 2019 and 2020 numbers were not reflective of a trend.

Beyond waste and water, Harvard took strides in its efforts to improve sustainability, achieving a 7 percent cut in net energy usage and completing construction on the new Science and Engineering Complex, which achieved Leadership in Energy and Environmental Design platinum status, the highest distinction offered by LEED.