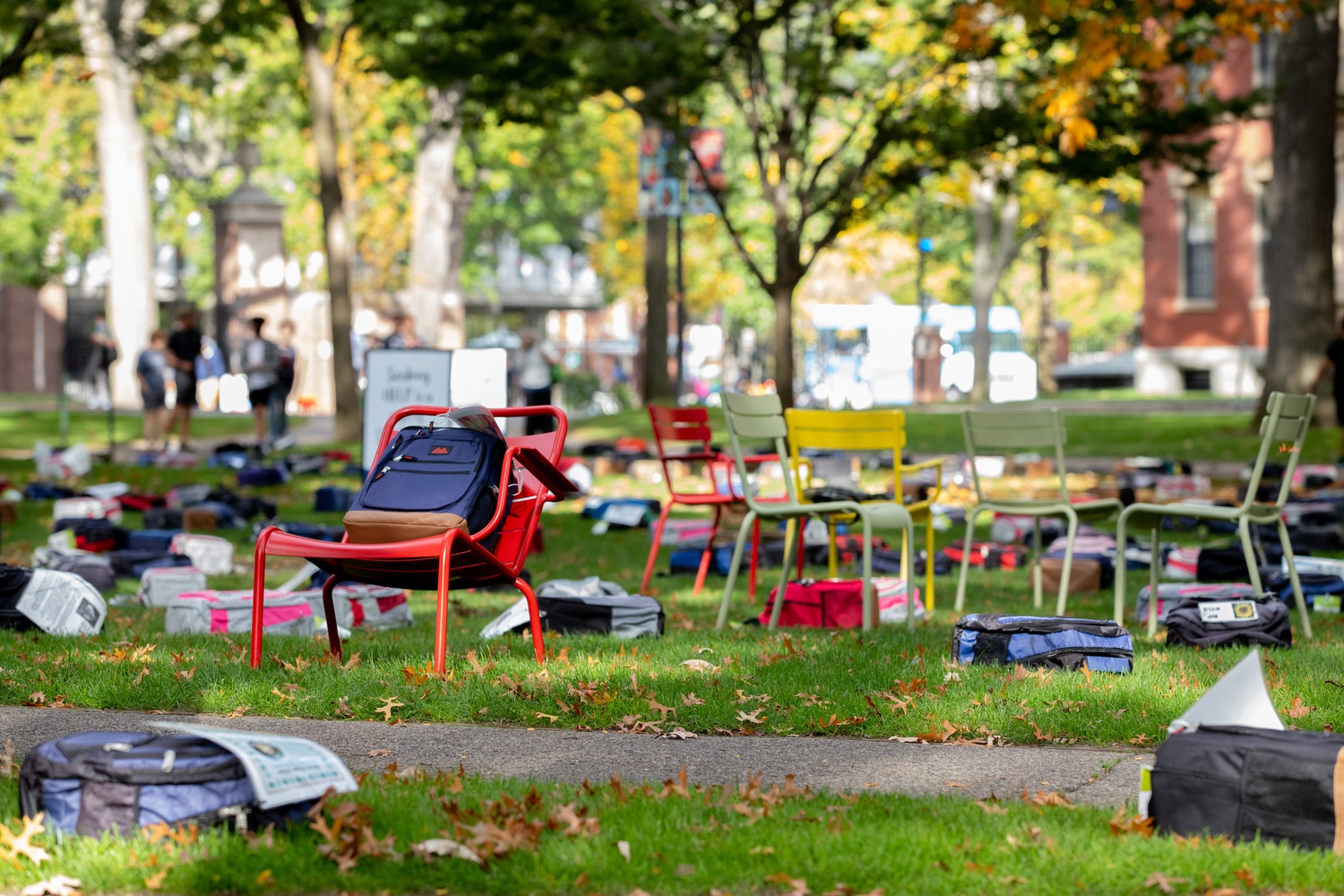 Roughly a thousand colorful backpacks dotted Harvard Yard on Saturday, symbolizing the average number of college students who die by suicide each year.

The backpack exhibit, entitled “Send Silence Packing,” put an under-addressed issue on glaring display for everyone wandering through the Yard: mental health is a struggle on college campuses, including Harvard’s.

For a decade, Active Minds has put on similar displays at college campuses across the country, tallying over 200 demonstrations, per the national organization.

Saturday’s exhibit in Harvard Yard marked the first event organized since the start of the coronavirus pandemic and the first stop in a roughly 32-school traveling tour, according to Aaron C. Plattus, a tour coordinator for the national organization.

People walking through the Yard Saturday could pick up pamphlets or scan QR-codes to learn more about the exhibit and suicide prevention resources.

“There’s information on how to help out a friend in distress, how to notice and see the signs of suicide in a friend or how to get help for oneself,” she said. 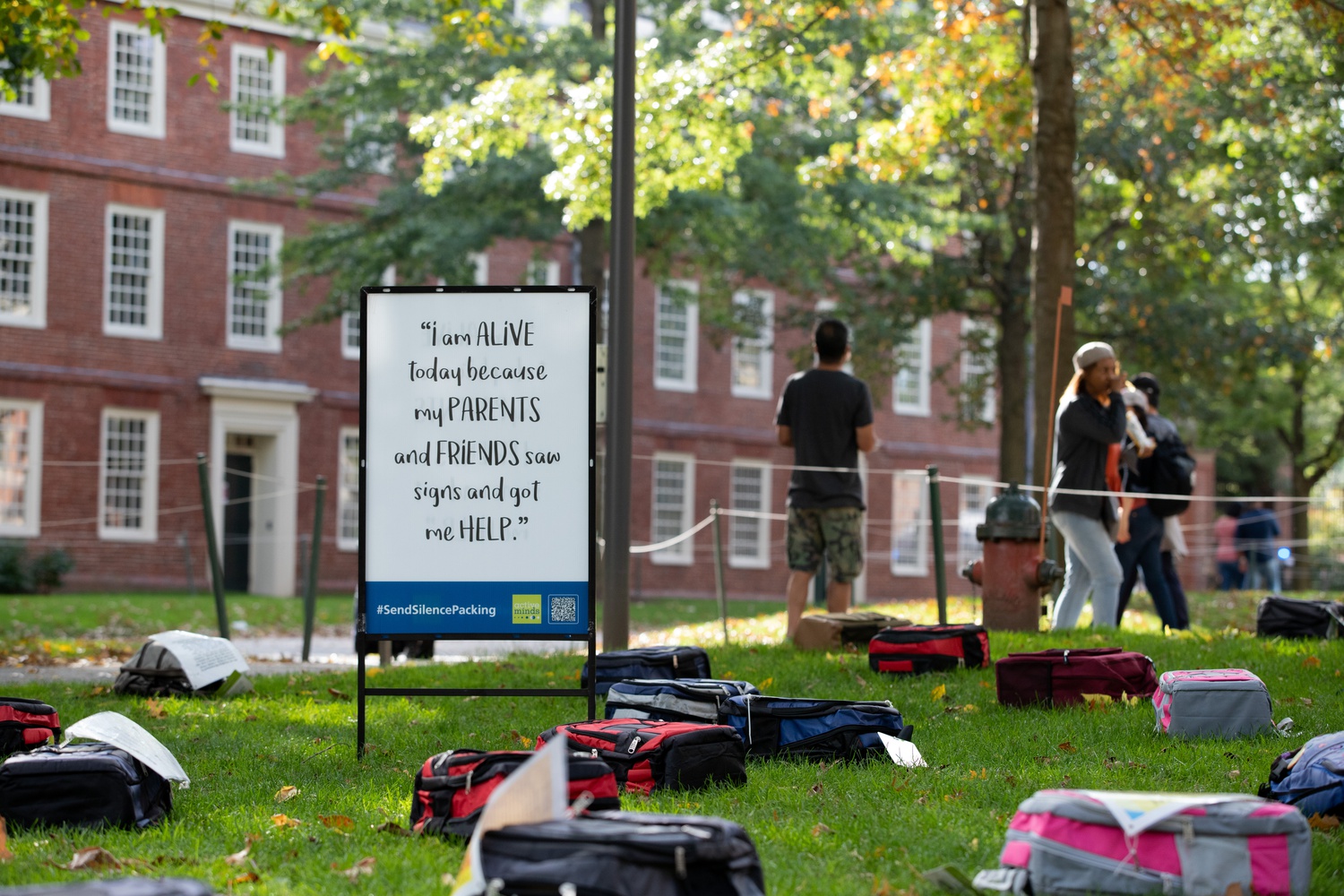 Many of the backpacks on display once belonged to college students who died by suicide and were donated to Active Minds by family or loved ones. By Angela Dela Cruz

Harvard student peer counseling groups Eating Concerns Hotline and Outreach and Contact Peer Counseling were also in the Yard Saturday, speaking with passersby about the resources they offer.

Per Wang, Harvard Counseling and Mental Health Services clinicians were available in the Yard in case attendees found the exhibit “distressing.” Harvard University Health Services and the Undergraduate Council helped fund the event, she added.

Hannah R. Alton ’22, the chapter’s other founder, said they placed warning signs around the edges of the exhibit to notify passersby of its “heavy” content.

“Since a lot of first-years live sort of around here and might just come across this not knowing what’s going on, we want to inform people that this is potentially triggering content,” she said.” “It can be pretty emotional for people.”

Javhlan Amgalanbaatar ’23-’24 and Devon N. Gates ’23-’24 came to see the Send Silence Packing event together after seeing details on social media. As they approached the hundreds of backpacks, Gates said it was difficult to “comprehend everything that was lost.”

“Reading it from the perspective of the people who loved them, was so much more heartbreaking,” Amgalanbaatar said.

For James T. “Jim” Maher, who graduated from the Extension School and was visiting Harvard Saturday, reading the stories was especially difficult.

Maher, who said his brother died by suicide, was struck by how unexpected each suicide had been for many of the friends and family members.

It is “so easy to overlook the signs” of suicide, he added.

Jacob C. Hawkins, who graduated from the Kennedy School, came across the backpacks while giving a tour of the campus to a friend.

Upon seeing the backpacks, Hawkins said he felt compelled to return and pray for those considering suicide. He said he had previously contemplated suicide but turned to Jesus to allay his hardship.

“For me, it’s a wake-up call that people in this world are hurting. They’re struggling,” Hawkins said.

Andrew J. Thomas, a freshman at the University of Wyoming visiting Harvard’s campus, contrasted the exhibit to a lack of awareness about mental health in his home state of Wyoming, which has the highest suicide rate of any U.S. state.

Thomas noted that he knows several young people, including a close friend, who died by suicide.

“No one talks about it. It happens and then people just ignore it and they move on,” he said. “I think having something like this is really special for someone that’s struggling. They can come out and even for people that don't understand it too, it brings a wider understanding.”

If you or someone you know needs help at Harvard, contact Counseling and Mental Health Services at (617)-495-2042 or the Harvard University Police Department at (617) 495-1212. Several peer counseling groups are offering virtual confidential peer conversations during the pandemic; learn more here.