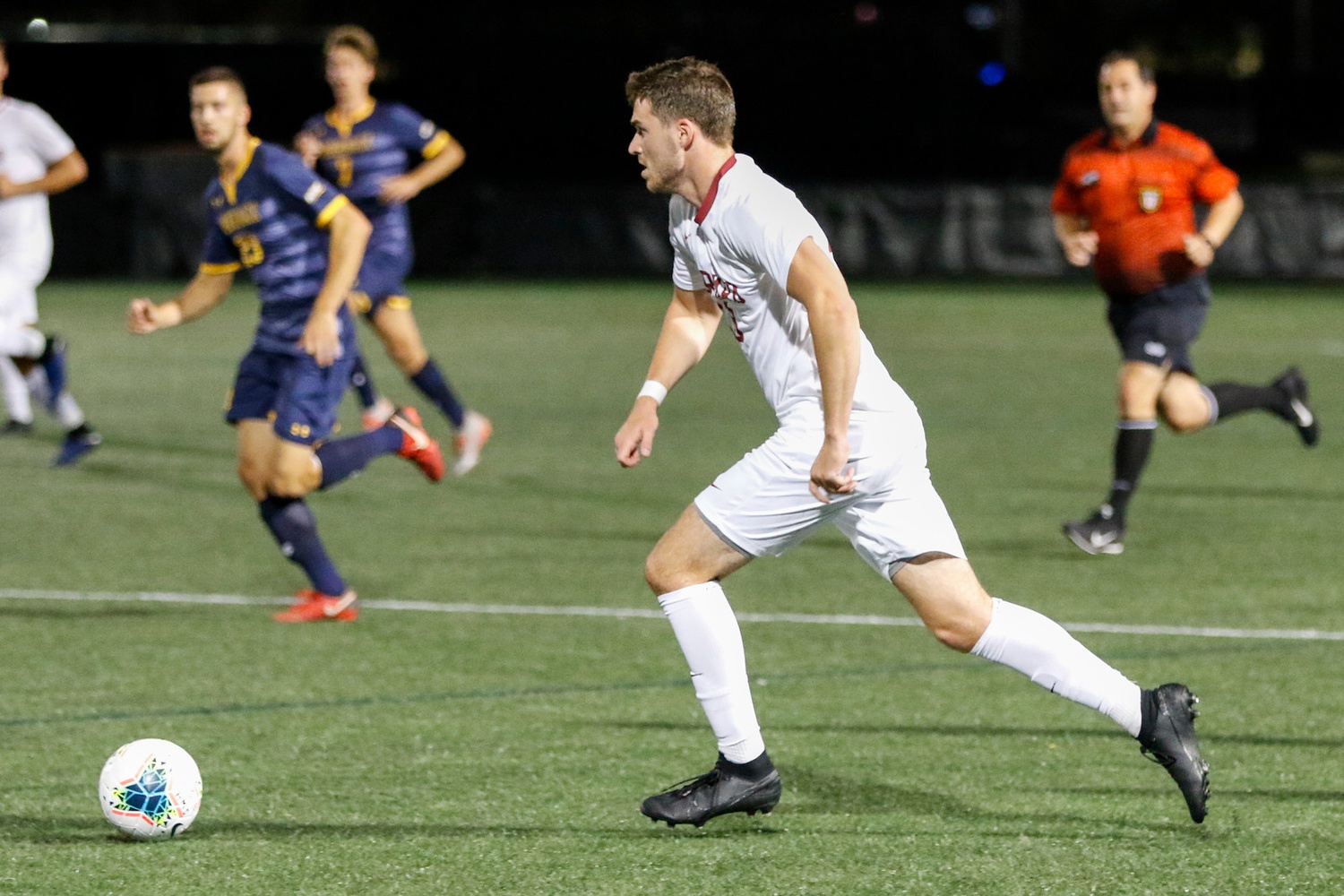 In a nail-biter start to the season, the Crimson men entered overtime in five out of their first eleven games. By Timothy R. O'Meara
By Eamon J. McLoughlin, Crimson Staff Writer

For the fifth time in eleven games this season, Harvard played overtime on Saturday night after regulation was not enough to find a winner. After a hard-fought 110 minutes, the Crimson men had to settle for a 2-2 draw with Brown.

Harvard (4-4-3, 0-1-2 Ivy League) is still looking for its first Ivy League victory of the season following Saturday night’s matchup. Despite having the majority of the chances and more than twice as many shots as Brown (3-7-1, 1-1-1 Ivy), the Crimson was not able to find a winner in front of its home crowd.

“I thought we controlled the game right from the start, we dictated play, and had possession,” sophomore midfielder Willem Ebbinge said of the match. “We created chance after chance, but we just need to really be clinical if we're gonna push past these teams going forward.”

Harvard found itself behind early after conceding in just the third minute of the contest, after failing to clear a cross into the box. Brown’s striker climbed highest following the scramble, sending a looping header into the side of the net to put Brown ahead with just over two minutes played.

The goal seemed to wake the Crimson men up, who began to take control of the game after a shaky start. Harvard’s first real chance of the game came in the 20th minute through Ebbinge, who danced through four defenders before sending the ball across goal, which was cleared off the line through a last-ditch challenge that retained Brown’s lead.

The Crimson was awarded a free kick just over a minute later when first-year forward Alessandro Arlotti was pulled down as he ran through on goal. Ebbinge took the kick from about 25 yards out and struck the inside of the post, which sent the ball back across goal. Arlotti showed his striker’s instinct, popping up in the right place at the right time to tap the ball into the empty net for his team-best sixth goal of the season, which leveled the game at 1-1.

Harvard grabbed a second goal under three minutes later, in the 24th minute, after an impressive passage of play. Following a series of passes on the right side, sophomore midfielder James Fahmy dished the ball to Ebbinge just outside the box, who hit a beautifully weighted one-touch pass over the top into the box. Junior forward Martin Vician timed his run to perfection, heading the ball past the onrushing keeper who was caught in no man’s land, putting the Crimson ahead 2-1. Ebbinge tallied assists on both goals, his fifth and sixth of the season, which leads the team.

Following the break, Harvard was again caught flat-footed, nearly conceding in the opening seconds of the half. Brown went long on the kickoff and the Crimson failed to fully clear, with the ball falling to the feet of a Brown striker just in front of the goal. Junior goalkeeper Oskar Nilsson came up with a huge save to preserve Harvard’s lead before defender and captain Fernando Docters cleared the ball off the line on the ensuing corner kick. Brown registered nine corners on the night, while Harvard was awarded eight.

The Crimson again settled into the game following the slow start, creating a good number of chances, but failing to find the back of the net. Brown managed to level the game against the run of play in the 69th minute, after its striker collided with Nilsson on a cross, and bungled the ball into the back of the net. The Harvard players surrounded the referee, arguing that Nilsson was fouled, but the official was not swayed and the goal counted, which leveled the score at 2-2.

“I think the response was good, we scored two goals, and then had the very unfortunate second goal,” junior forward Martin Vician said of the game. “I think overall, we combined well and played pretty well. It was an unlucky game.”

The Crimson continued to create chances as the game progressed, but neither team was able to find a winner after 90 minutes of regulation and 20 minutes of extra time. Harvard tallied 28 shots on the night, its season-high, compared to 13 for Brown.

The Crimson heads out to Worcester on Tuesday to face Holy Cross at 7 p.m. for its final non-conference matchup of the season.