Harvard's endowment — which is controlled by the Harvard Management Company — reached its largest sum in history at the end of fiscal year 2021. By Steve S. Li
By Virginia L. Ma and Kevin A. Simauchi, Crimson Staff Writers

Harvard Management Company returned 33.6 percent on its investments for the fiscal year ending in June 2021, skyrocketing the value of the University’s endowment to $53.2 billion, the largest sum in its history and an increase of $11.3 billion from the previous fiscal year.

The returns were announced in a note from HMC CEO N.P. “Narv” Narvekar in the University’s Annual Financial Report published Thursday.

“Public and private markets both continued their strong performance, which allowed the endowment to not only increase its distribution to the University, but also continue to grow during this critical time when pandemic-related financial pressures challenge all of higher education,” Narvekar wrote.

The endowment distributed just over $2 billion toward the University’s operating budget, which represented 39 percent of Harvard’s annual revenue sources, according to the report. The University ended fiscal year 2021 with a $283 million operational surplus, which included revenue from the endowment. 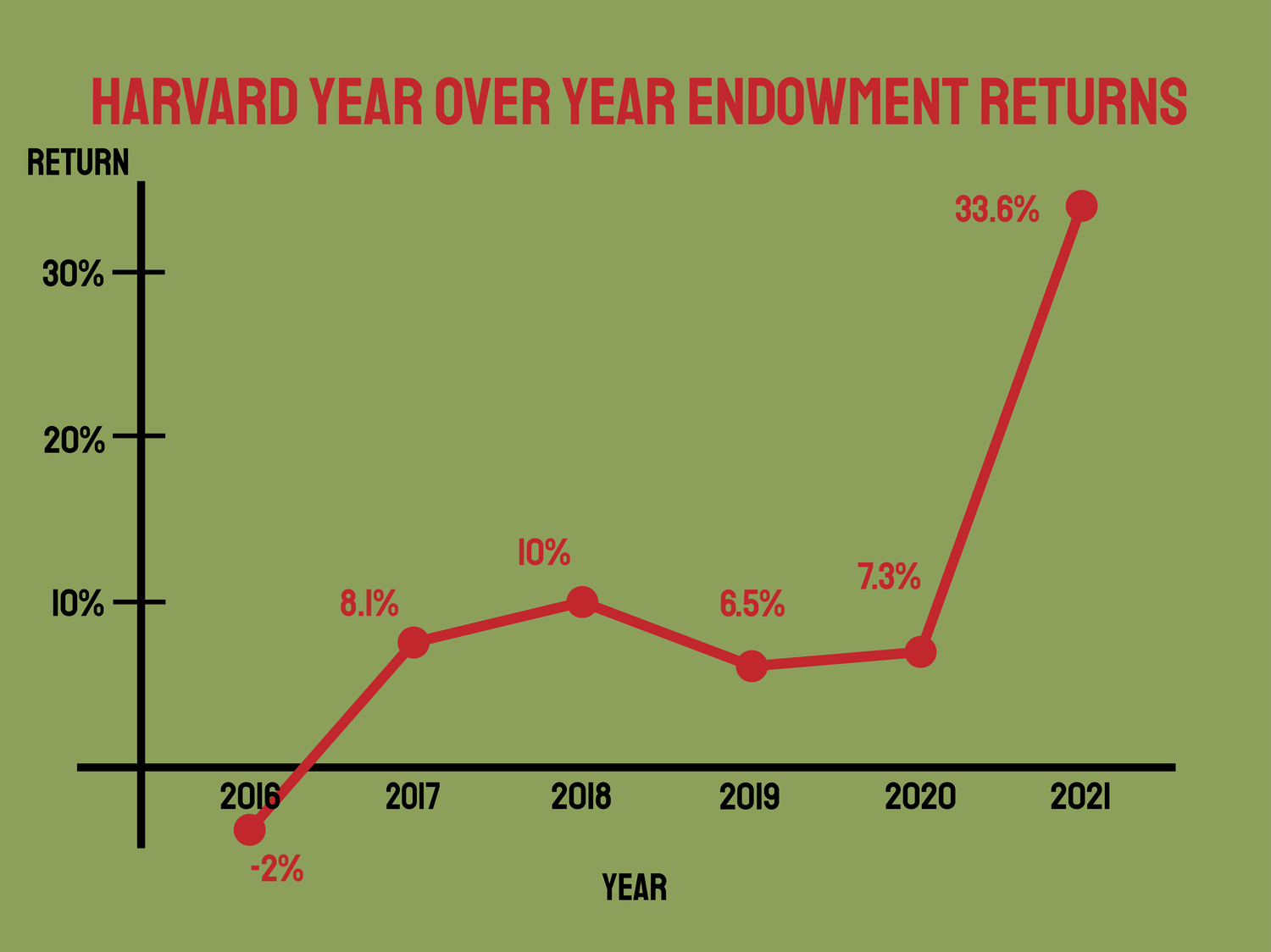 At the close of the fiscal year 2020, the endowment returned 7.3 percent on its investments, and was valued at $41.9 billion.

In late September, experts predicted that Harvard’s endowment could post returns of at least 20 percent, citing the strong market performance as well as record-setting endowment returns at colleges and universities across the country.

In the first days of the pandemic, experts speculated that the coronavirus pandemic could leave Harvard’s endowment in “grave” condition. Their concerns did not materialize.

However, Harvard’s returns have continually lagged behind its peers in the Ivy League, a trend that appeared to continue this past fiscal year. Of the schools that have announced their endowment returns, Dartmouth College reported 47 percent returns while the University of Pennsylvania posted 41 percent returns.

“Over the last decade, HMC has taken lower risk than many of our peers and establishing the right risk tolerance level for the University in the years ahead is an essential stewardship responsibility,” Narvekar wrote.

In 2018, HMC formed a risk tolerance group in order to assess how the endowment could take on more risk while balancing Harvard’s financial positioning and need for budgetary stability. Under Narvekar’s leadership, HMC has dramatically reduced its assets in natural resources, real estate markets, and public equity, while increasing its exposure to hedge funds and private equity.

At the close of his message, Narvekar cautioned that despite the year’s success, Harvard’s endowment should not be expected to gain such strong returns annually.

“There will inevitably be negative years, hence the importance of understanding risk tolerance,” Narvekar wrote. “What is more important is that our team, investment process/analytics, organizational structure, culture, and aligned incentives provide HMC with the framework for long-term success.”

The University’s endowment has drawn scrutiny in recent years for its size and for its ties to the fossil fuel industry, to the prison industrial complex, and to Puerto Rican debt.

Following over a decade of student, faculty and alumni activism, University President Lawrence S. Bacow announced in September that Harvard would divest from the fossil fuel industry by allowing its remaining investments in fossil fuels to expire.