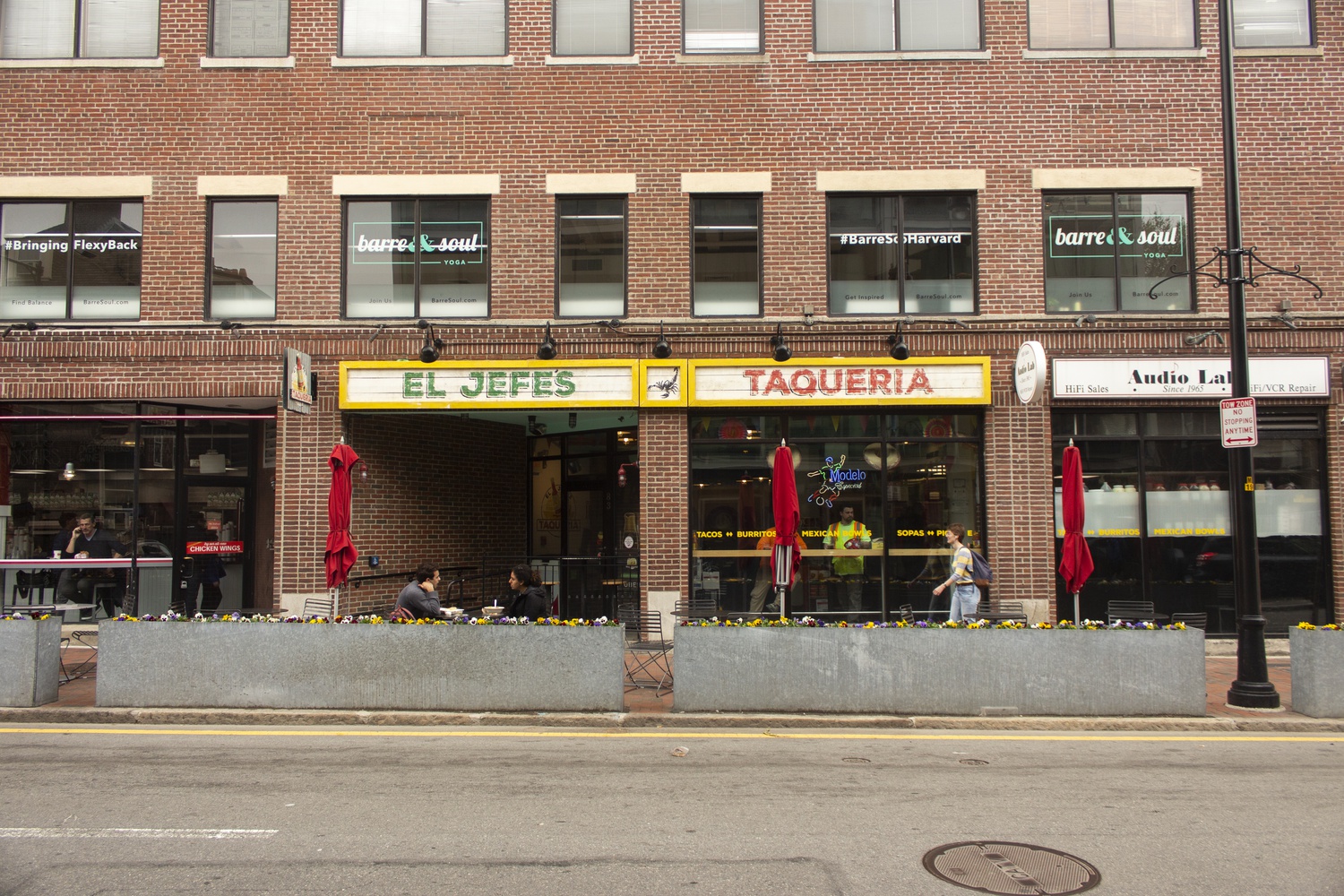 Amid renewed and perhaps unprecedented demand, the companies that have come to dominate the food delivery industry charge partnered restaurants between 25 percent and 30 percent of profits on every order. John F. Schall, the owner of Harvard Square’s El Jefe’s Taqueria (fondly known as “Jefe’s”), frames the issue simply, “The delivery companies have developed a business model that is absolutely destroying the supply chain that they depend on.”
By Kevin Lin

Having just placed two large brown bags of food in his passenger seat, the driver of a navy blue Honda Accord, whose car brandishes an Uber Eats sticker on its bottom right windshield, reenters El Jefe’s Taqueria. I tail him inside, noticing only one person seated at a table, tucking into his carnitas burrito and another in line asking for condiments. No other customers entering or leaving. It’s peak lunch hour, and there’s no music to drown out the sound of chewing and enthusiastic taco topping requests. As the delivery man leaves with his arms full of takeout, another comes to the counter.

Perched on my scooter outside, I see the first delivery man drive away, fast-casual Mexican food in tow. To most, the sheer amount of delivery orders stacked on the shelf behind the Jarritos fridge suggests a business not just surviving the pandemic but thriving.

The reality couldn’t be more different.

Amid renewed and perhaps unprecedented demand, the companies that have come to dominate the food delivery industry charge partnered restaurants between 25 percent and 30 percent of profits on every order. John F. Schall, the owner of Harvard Square’s El Jefe’s Taqueria (fondly known as “Jefe’s”), frames the issue simply, “The delivery companies have developed a business model that is absolutely destroying the supply chain that they depend on.”

Long before the pandemic, Schall observed that the combination of rising delivery fees and the increasing proportion of his restaurant’s revenue constituted by delivery sales posed a major obstacle to the long term survival of any restaurant — not just his own. “In 2019, I paid the delivery companies almost $400,000 between two restaurants. It’s a staggering number,” Schall notes. Last year, in an attempt to lower the delivery fees to 20 percent, Dining Alliance, a group purchasing organization for which Schall serves on the Board of Directors, offered a partnership with all 45,000 of their constituent restaurants across the country. But the delivery companies “wouldn’t even consider negotiating with us,” Schall says.

When he first published his thoughts as an op-ed in the Boston Globe in April, there were been four delivery companies. When UberEats acquired Postmates in July, that number dwindled to three.

“They don’t negotiate with you over price. Like lots of oligopolies, right?” Schall suggests. “Because there’s only three companies that control the entire market. They set prices. They don’t compete over price. And restaurants either can take it or not do delivery.”

However, to “not do delivery” isn’t feasible right now. Schall notes that pre-pandemic delivery sales made up about 25 percent of Jefe’s total revenue, but at the height of the pandemic they made up about 74 percent. To not continue participating would constitute a crippling loss.

Schall uses that 74 percent to pay his existing bills and the workers already employed at the restaurant. When it comes to customer fidelity and engagement, Schall feels strongly that “even though I lose money on every delivery, it is still better than them [customers] not doing anything.”

And he does lose money. “In the first eight weeks after the pandemic, I paid the delivery companies $93,000,” Schall says.

“Our mission since we were founded in 2004 has been to connect hungry diners with great, local restaurants. We send nearly 650,000 orders to restaurants a day, and restaurants have received almost $4 billion in sales from orders on Grubhub so far this year,” writes a spokesperson for Grubhub in an emailed statement. “Our fees cover the cost of providing the services we do on behalf of restaurants. When all of the costs and expenses of running our business are accounted for, we make only one percent of total food sales as profit.” 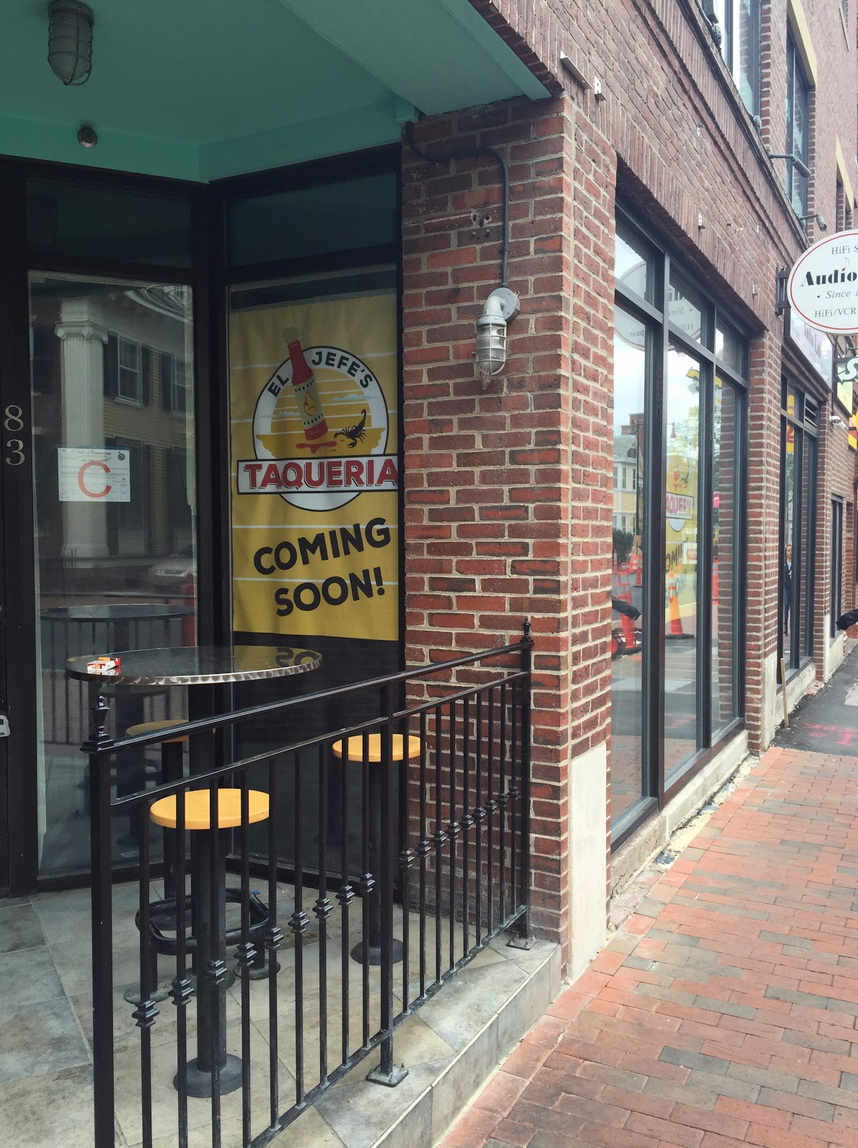 By Olivia A. Nicholls

According to the Massachusetts Restaurant Association, about 20 percent of Massachusetts restaurants that close during the pandemic will not reopen again. Considering this, Schall has been actively rallying for legislative mandates on delivery fee caps to ensure the longevity of the Commonwealth’s restaurants in a post-pandemic world.

His fight has been a long one. The Cambridge City Council passed a bill imposing a delivery fee cap in April, only to later claim, Schall says, an inability to enforce it. In response, Schall, along with the support of other Harvard Square businesses and the Harvard Square Business Association, was able to introduce language about a temporary delivery fee cap of 15 percent for the duration of the pandemic into a bill containing provisions to help Massachusetts restaurants. The bill passed unanimously in the Massachusetts House of Representatives, then made its way to the Senate Ways and Means Committee, where it languished unacted upon. On July 28, the Massachusetts House of Representatives incorporated the entirety of the delivery fee cap language into an omnibus economic development bill that passed yet again, but the Senate’s version of the bill had omitted all language regarding a delivery fee cap.

Furthermore, Schall appeared before the HSBA with the idea of a press conference to raise visibility and generate greater media coverage. In preparation, Schall emailed all 82 Harvard Square restaurants, and the HSBA created a press release to send to its 22,000 members. The culminating press conference counted about 25 restaurants in attendance, including Otto’s Pizza and Grendel’s Den, as well as celebrated Boston chef Jody Adams.

“I’m hopeful that there has been enough attention focused on this [delivery fee cap legislation] and people understanding the logic of it — the logic of it is just so compelling,” Schall notes. He pauses for a moment, smiles, and continues, “I’m hopeful.”

As far as what’s next for his delivery fee cap advocacy, Schall says he will enjoy a temporary, pandemic-locked decision and “maybe celebrate that night, but the next morning go to work trying to make [delivery fee caps] permanent.”

Trying to emphasize his point, Schall addresses me by my first name: “I think it’s going to be really important, Kevin, to make this permanent because in whatever world we’re going to come to call normal, and if restaurants are going to make it, then delivery fee caps have to be made permanent, not just during the course of the pandemic.”

For Schall, the movement and his work is more than ensuring the survival of his own taqueria, but rather the survival of the community and beyond. Regarding his extreme openness about his finances and losses, he explains, “Helping [people] understand concretely what this means and what it’s doing for restaurants is way more helpful than whatever competitive disadvantage there is by somebody knowing how much delivery you do.” Gathering his thoughts, he adds, “It just doesn’t matter to me.”

“Look, I’m one of the lucky ones. Right? As devastating as this is, as bad, as hard as this is, I'm one of the lucky ones here. There are so many restaurants that only did in-house dining, that didn't have a takeout and delivery system in place before the pandemic hit, that were just devastated by this,” Schall says. “It’s partly why I feel a responsibility to try to make this happen not just for me, but for all the restaurants that are going to be impacted.”