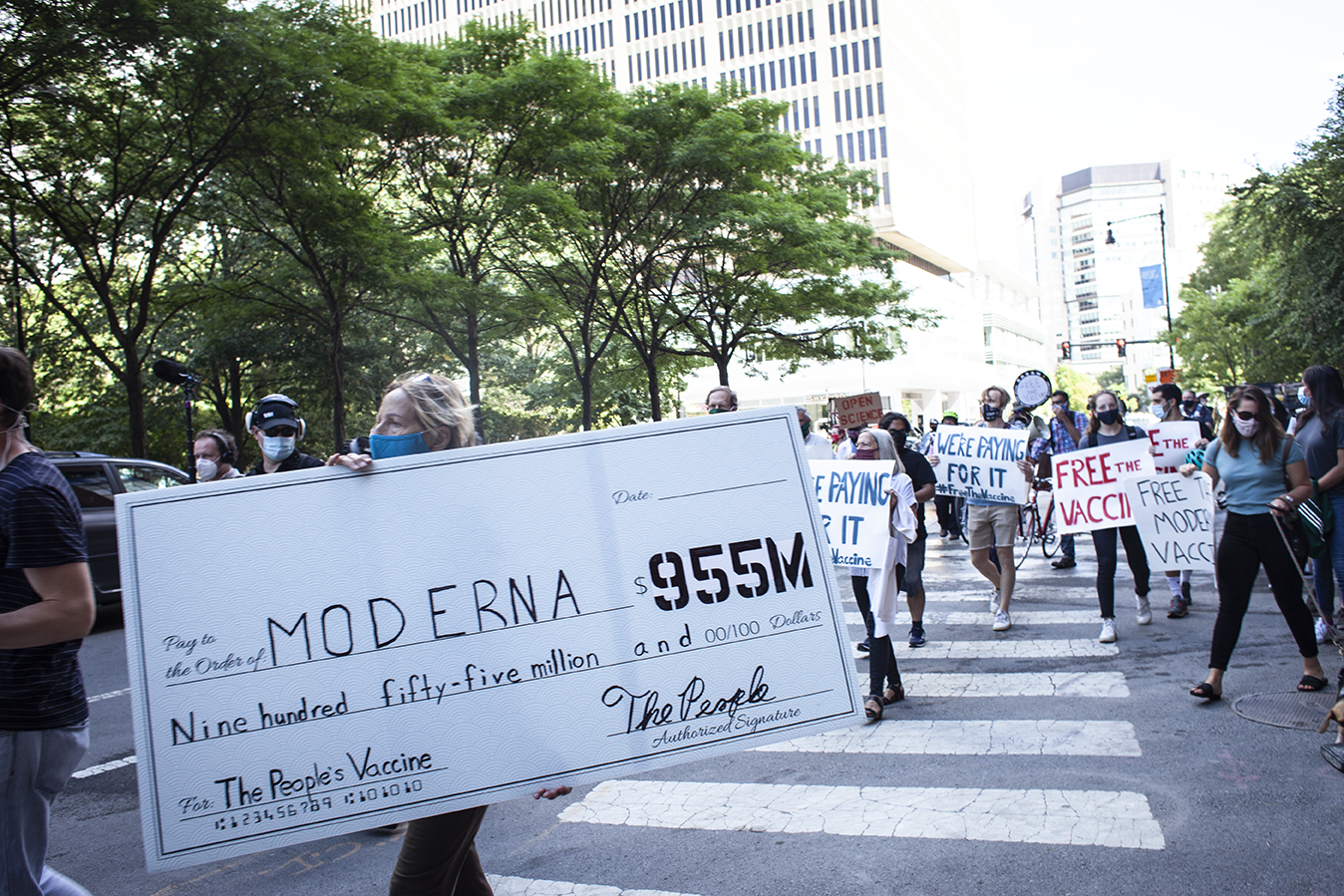 Last month, Aines, Foster, and Saini all attended a Free the Vaccine rally in front of the Moderna headquarters in Kendall Square, shouting “People over profits!” as they marched down the streets of Cambridge.
Advertisement
Advertisement

As the possibility of a COVID-19 vaccine grows more likely, questions of accessibility and fair pricing are also increasing. The "Free the Vaccine" movement is just one effort to preemptively combat the inequalities that may deepen with the vaccine's release.
By Sophia S. Liang

As a child, Stephanie E. Aines watched her mother suffer from an undiagnosed chronic neurological condition for over a decade before she could get health insurance and access treatment. “I grew up thinking that this was all luck — it was just too bad that my mom was sick for so long,” Aines recalls.

It wasn’t until her twenties that Aines discovered the power of community organizing in the Boston area, where she grew up. Organizing is about these questions, she explains: “What do we care about? What’s our vision for the world we want to live in? Can we work together?” As she began teaching her skills to students and faculty at Harvard Medical School, they shared their knowledge about “the business side of medicine.” There is a shortage of primary care across the country, they explained, because it doesn’t generate enough profit for hospitals.

“As they said that I remember freezing, because I realized in that moment…my mom’s health had nothing to do with luck,” Aines says. “And it had everything to do with the fact that other people were getting rich while my mom was so sick.”

Aines now serves as director of organizing and training at Right Care Alliance, a grassroots organization that aims to hold healthcare institutions accountable to local communities. For years, she’s been advocating to make drugs such as insulin affordable for the people who need them. Now her focus is the COVID-19 vaccine — starting with the one being developed in her own backyard.

The Cambridge-based biotechnology company Moderna has received $1 billion in federal funding to cover the entire research and development cost of its vaccine candidate, which is currently in its Phase 3 clinical trial. That marks the final stage required by the FDA before the vaccine can be approved and distributed. In August, Moderna received an additional $1.5 billion to produce and deliver 100 million doses to the U.S. government. All of this funding has come from taxpayer dollars. And despite receiving more financial support than any of its competitors, Moderna is charging the highest price per dose.

Seeing pharmaceutical companies make “such a significant and disgusting profit” from the pandemic reminds Aines of why her mother’s illness was left untreated. “I have that same sick feeling in my stomach,” she says. “They’'re selling back to the government something we’'ve already paid for, so this [vaccine] absolutely needs to be free.”

The Right Care Alliance has joined the global Free the Vaccine movement to demand that once an effective COVID-19 vaccine is created, it will be accessible to everyone and free at the point of delivery. Federal officials have already announced a distribution plan where no Americans would have to pay out of pocket to get vaccinated, but Free the Vaccine activist Nathan S. Foster says there’s still work to be done to ensure that undocumented people can get free vaccines. Many also worry that certain administrative fees may accompany the “free” vaccine nonetheless, creating barriers for those who are uninsured. People who live far away from vaccination clinics or who are unable to take time off work face additional hurdles to getting the two doses that may be necessary.

Boston’s Free the Vaccine movement is calling on Moderna to openly license its vaccine, which would allow generic manufacturers to produce it in greater quantities and drive down its price.

“Moderna maintains monopoly patent rights despite the public investment, which means that when there’s a need for more vaccines…Moderna can charge whatever it wants,” Foster says. Moderna’s deal with the government already seems to signal the possibility of price inflation. In addition to the first batch of 100 million doses that were purchased at $15 per dose, the deal offers the government the option to purchase 400 million more doses at $16.50 per dose. It is unclear whether two doses for each person will be necessary, and therefore whether this deal will cover the more than 328 million Americans who will need vaccines.

Foster believes that making the coronavirus-related intellectual property of vaccine manufacturers freely available is crucial for public health in lower-income countries — experts have cautioned that at current production levels, there may not be enough vaccines for everyone in the world until 2024. “I think that these can often be very abstract issues, and certainly American biotech companies want to keep it that way,” Foster continues. “But the truth is, their insistence on private monopoly ownership of what should be public technologies contributes to global racism and inequality.”

Dr. Vikas Saini, the co-chair of Right Care Alliance, believes that the Boston scientific and activist community has a unique responsibility to the public due to the high concentration of universities, hospitals, and biotechnology companies in the area. While there is no shortage of people working to tackle COVID-19, Saini says they must take extra steps to make sure their solutions are distributed in an ethical and equitable way.

“People who are scientists working on these vaccines have a responsibility to speak up,” he says. He cites Jonas Salk, the developer of the polio vaccine who chose not to patent or seek a profit from it. “I want to be clear that we need a vaccine. We need smart people to work on it. It’s just that we also need a little more public spiritedness and less price gouging.”

Last month, Aines, Foster, and Saini all attended a Free the Vaccine rally in front of the Moderna headquarters in Kendall Square, shouting “People over profits!” as they marched down the streets of Cambridge. Although Moderna has yet to take action to meet their demands, Aines says she felt empowered by the large group of activists, clinicians, and students that gathered.

“I really felt that this is going to be a long fight, but it gave me so much more hope than I’d felt in a little while,” she says.

— Staff writer Sophia S. Liang can be reached at sophia.liang@thecrimson.com.