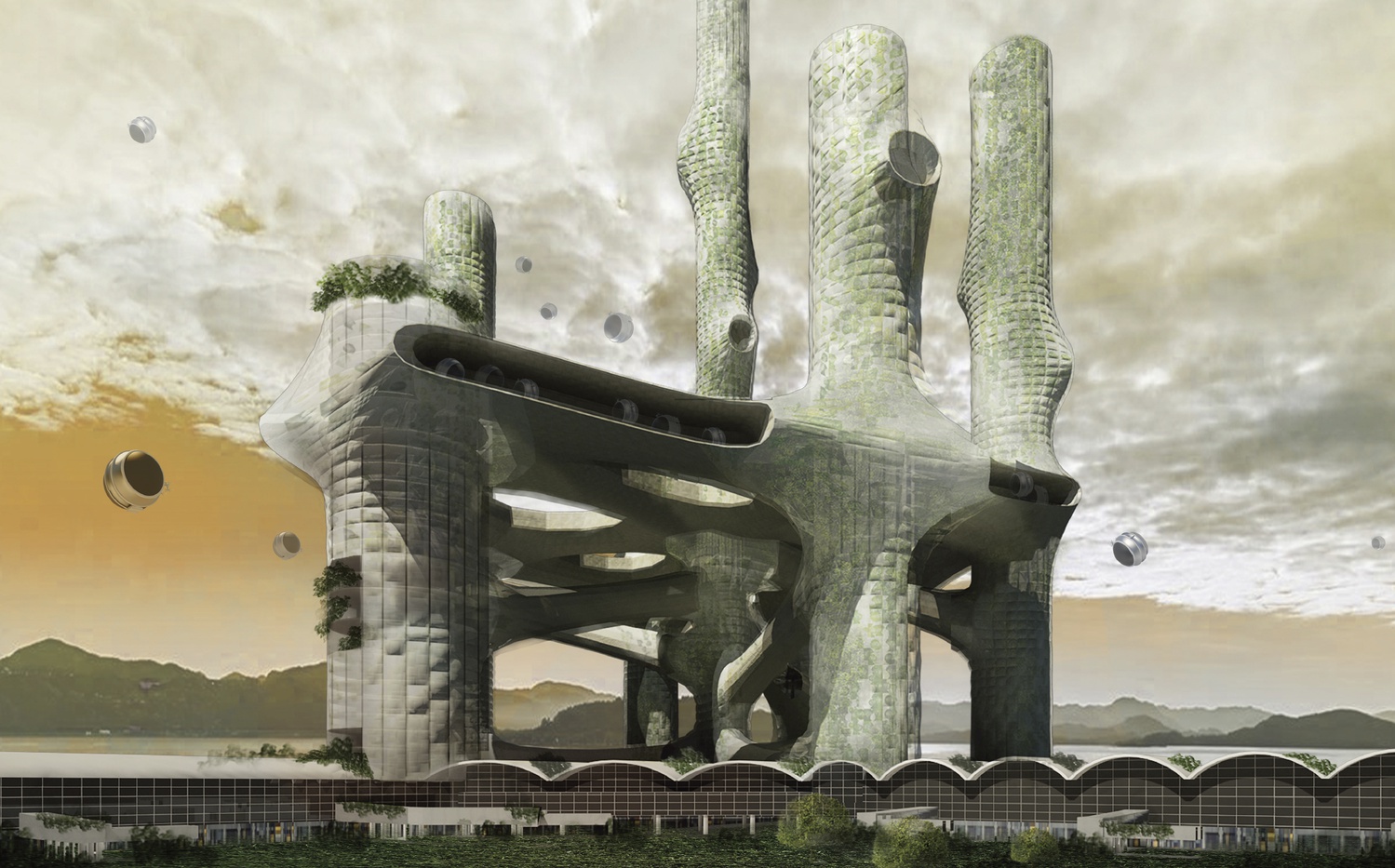 Welcome to 2100: Meet your Self-Flying Pod

Spherical vehicles float up each of the tubes, almost as if they were water and sap molecules and the towers were the tubular xylem and phloem transport system of a plant. This building is anthropomorphic. It lives and breathes as its own being. As unusual as this all may seem today, it could be Hong Kong International Airport in 2100.
By Felicia Y. Ho

Four tall towers spiral into the clouds, connected to one another by crisscrossing skybridges. Patches of moss hug the outside walls while vines and leaves drape over the tops of the towers. Spherical vehicles float up each of the tubes, almost as if they were water and sap molecules and the towers were the tubular xylem and phloem transport system of a plant. This building is anthropomorphic. It lives and breathes as its own being. As unusual as this all may seem today, it could be Hong Kong International Airport in 2100.

Today, some areas of Hong Kong are so densely populated and housing is so limited that many residents live in packed high-rise units, divided up like office cubicles, with barely enough space to sit up. Less like apartments and more like compartments, these rooms are known as “coffin homes,” a term that reflects not just their confined space but the fact that the suicide rate among their residents is unusually high.

Like most other airports, Hong Kong International Airport is already sprawling in size, taking up large amounts of land and contributing to the limited space available in the city. If the airport were to be further developed, encroaching upon what little land is left would only further exacerbate space issues. When designing an airport for Hong Kong’s future, then, one would not want to build out, but rather, up.

For this reason, we have the four long towers: Instead of walking from one end of the airport to the other, one travels up tubes to reach departure and arrival terminals for domestic, international, and, since this is the future we are discussing here, interstellar travel. While these towers are reminiscent of the other skyscrapers and apartments dotting Hong Kong’s skyline, travelers inside the airport have adequate room to relax and unwind before their flight. Spending time in this particular airport, as opposed to most airports which are defined by a certain red-eye misery, would be a memorable, even zen experience.

This design is the brainchild of Harvard Graduate School of Design students Catherine Chen, Wentao Guo, and Zinan Chi.

Chen, Guo, and Chi’s design was recently shortlisted for the 2020 Fentress Global Challenge as one of 22 entries selected by a panel of esteemed architects and designers from over 100 submissions worldwide. FGC — founded in 2011 by Curtis W. Fentress, a world-renowned architect, and sponsored by the Denver-based architecture firm he leads — is an annual international student design competition that tasks graduate and undergraduate students studying architecture or engineering to imagine the airport of the future. Submissions are judged by esteemed architects and designers for creativity, integration of the site’s context and culture, crisis-response potential, and functionality. Winners receive a cash prize and are invited to join Fentress at an exclusive event.

Airports are the focus of the competition because they are “beginning to be [their] own place. It’s no longer just a space one transfers through to get from surface transportation to air transportation. It’s a place where we spend some time,” Fentress says.

Indeed, one of Fentress Architecture’s most famous projects is Denver International Airport, known for its white snow-capped roof design, which evokes the nearby Rocky Mountains. After 9/11, its more functional aspects as an airport also proved key for it to be “one of the first airports to adapt to the new security requirements overnight because it was built to be very flexible,” Fentress shares. 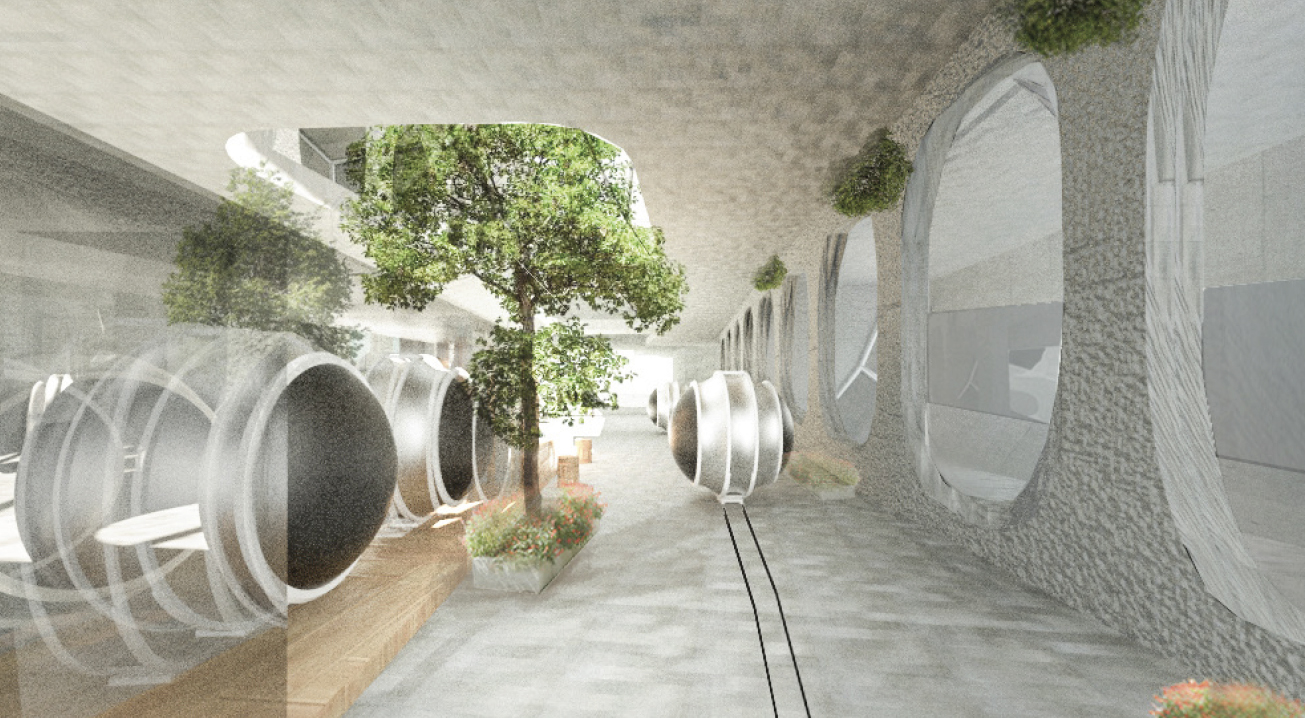 These are the Airpods of the future. By Courtesy of Catherine Chen, Wentao Guo, and Zinan Chi
Advertisement

Similarly, Chen, Guo, and Chi’s design also offers innovative solutions to larger global issues like climate change and public health crises. Each tower’s “respiratory skin” features greenery that filters out pollutants from smog and generates fresh oxygen that circulates around the airport. Travelers can skip the bumper-to-bumper madness of traffic jams on the road and at sea by boarding autonomously flying spherical “air pods.” In these isolated and private pods, two passengers can sit back and watch the towering skyscrapers of Hong Kong fade to glittering specks from large glass windows on either side. Whisked into large openings in the airport tubes, the pods gently glide onto a horizontal rail system and carry passengers smoothly through touchless self-check security checkpoints. At a lounge or a terminal, the door of the pod clicks and whirs open, letting passengers roam into a spacious sunlit room or board a sleek vertical landing aircraft. Gone are the days of empty runways, queues, and endless taxiing: These aircrafts quickly ascend through the tube, heading for the next city or galaxy that awaits.

Most importantly, “people from all sides see the airport as green, and it brings life to the city,” Guo says.

“We were very ambitious and willing to challenge ourselves, and we are grateful to have the opportunity in this project to learn new modeling programs and rendering strategies,” Chi says of the process behind the design. Working on this project in the midst of the coronavirus pandemic proved to be especially challenging as “we were working in different parts of the world; we came together to collaborate on this project to envision the future and its architecture,” Chen recalls.

“[FGC] is a platform for students to shine and see what young minds are thinking because they are our future,” Fentress says. As the world experiences crises similar to the high density population in Hong Kong, the wildfires in California, and the coronavirus pandemic, Fentress/source? says it is more important than ever before to look to public buildings that can adapt, change, and overcome the next natural or manmade disaster.

Only then can we see the year 2100 for ourselves and board a flying air pod into the sky.