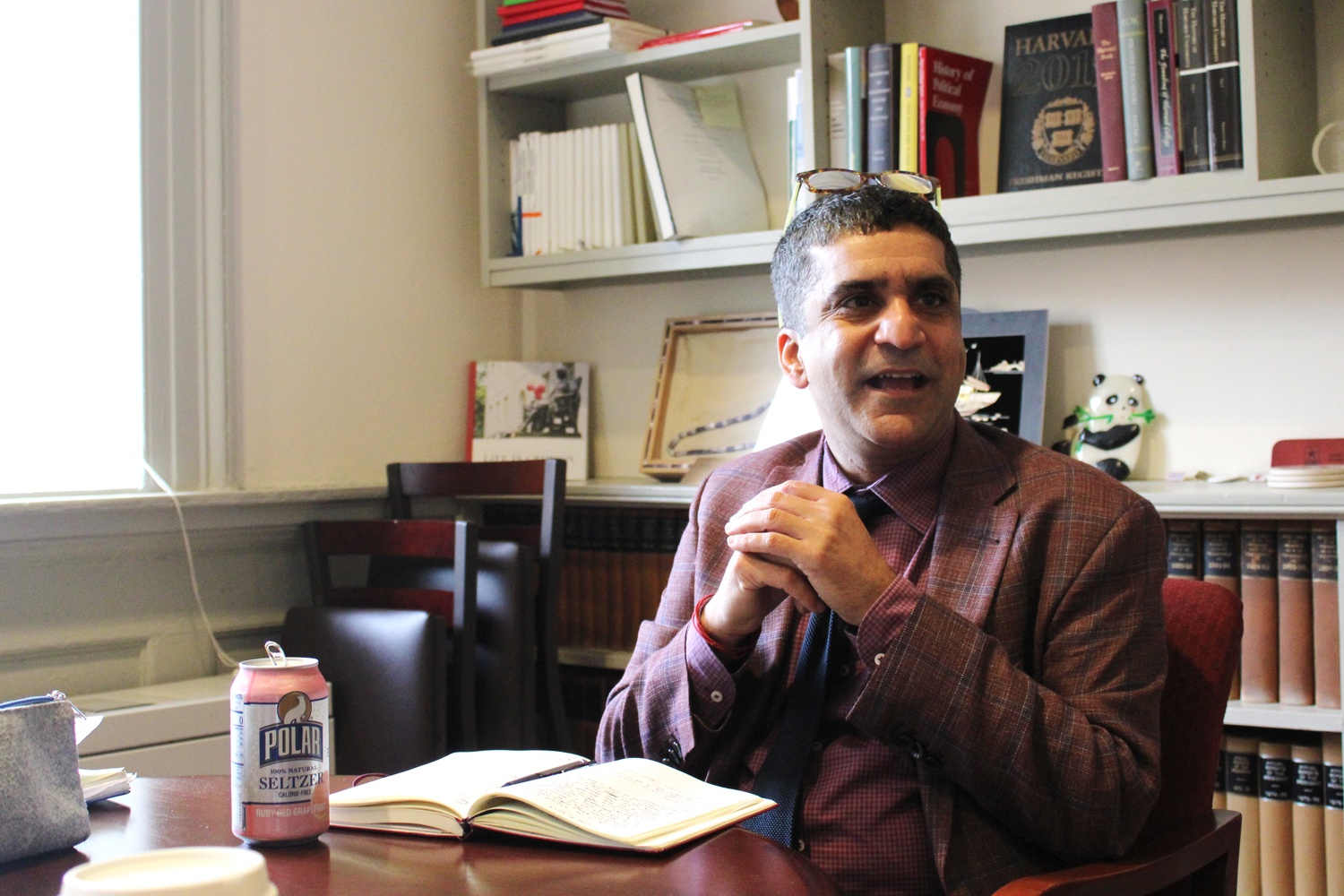 Dean of the College Rakesh Khurana discusses the possibility of an Ethnic Studies concentration in a December interview, before the coronavirus shut down campus. Khurana said Friday that the College's process for adjudicating pandemic protocol violations is informed by principles including taking proportional disciplinary action and protecting student privacy. By Shera S. Avi-Yonah
By Juliet E. Isselbacher and Amanda Y. Su, Crimson Staff Writers

Dean of Harvard College Rakesh Khurana said in a Friday interview that taking proportional disciplinary action and protecting student privacy were among the principles that informed the College’s process for adjudicating pandemic protocol violations.

Khurana said the disciplinary process is aimed at promoting student well-being and stressed that the College was committed to “proportionality” in its response to students who break the community compact.

He confirmed that the Harvard University Police Department — in addition to other emergency services — is prepared to step in and address social distancing violations in the case that events escalate beyond the capacities of house staff such as on-call proctors or tutors.

Khurana added that he supports creating norms in which issues are resolved “at the local level” before involving emergency services.

Khurana also explained the thinking behind convening a new Community Council — composed of an equal number of student volunteers, faculty, and staff members — to enforce the community compact which students were required to sign before returning to campus.

Khurana said administrators decided to create a new body, rather than delegate enforcement to the existing Honor Council or Administrative Board, because they felt it was imperative to address violations with the “right set of tools.”

“Since the goal of what was behind the community compact has to do with the health and well-being of our community — specifically around the transmission of COVID-19 — we felt it was really important to keep that separate from academic continuity and academic issues as well as from the questions around student conduct,” Khurana said.

Khurana added that it was important to set up a group specifically attuned to maintaining the privacy of students’ health information amid the pandemic.

The Community Council employs a system of tiered responses to violations according to their severities. Council decisions will have one of four outcomes: a determination of no violation, a warning, “community responses” like education, and removal from housing.

Khurana declined to comment on what would constitute a minor or severe violation of the community compact. He did say, however, that the Community Council is committed to evaluating each transgression in context and avoiding an algorithmic, one-size-fits-all approach.

“One reason you bring a diverse group of people together with different backgrounds and understandings is that you want them to apply their judgment and their different lived experiences and perspectives, and to collectively come together to inform that judgment,” Khurana said. “The goal of the community compact is not to punish people, but it's to protect the health and the well being of our community.”

Though Harvard administrators praised undergraduates earlier this month for largely adhering to social distancing norms, students said large gatherings on the Charles River and in campus courtyards contradicted this success story. Nonetheless, undergraduates in residence are enjoying increased flexibility from when they first arrived on campus, with permission to gather in groups of ten while maintaining distance and wearing masks.

“I think we're doing okay,” Khurana said of student adherence. “I've been really impressed by how hard our students are working to adapt to this environment and following the guidelines.”

Still, he stressed that the situation could at any moment spin “out of control very quickly” and called for students to continue exercising diligence in social distancing.

“I also understand the natural inclinations of wanting to get to know people and group in larger numbers,” he said. “We all need to keep doing better, because it takes a while to develop a new set of norms.”

Unable or unwilling to return to campus this fall, a number of undergraduates have chosen to take up residence in the Cambridge or Greater Boston area this semester. Many said they hoped living close to Harvard would help them maintain the continuity of their College experience, facilitate socially distanced meet-ups with friends, and allow them access to certain campus resources.

During the Friday interview, Khurana said administrators are aware that a “not insubstantial” number of students have chosen to find independent housing near campus. Though only students living in residence had to sign the community compact, Khurana emphasized that the College still expects students living elsewhere to be “ambassadors of Harvard.”

“We've also tried to make very clear to our students wherever they are that the handbook continues to be in force, and that our expectations are that the students will abide and adhere to those handbook guidelines,” he said.

“They're living in communities in which there are people with different health conditions. We all have to operate in a way that is really mindful that the impact that we're having is not just simply for ourselves, but for people we might never know,” he continued. “Our positive impact can have that effect and really keep people safe. And similarly, a disregard for public health guidelines has serious health consequences and, in some cases, life-and-death consequences for others.”