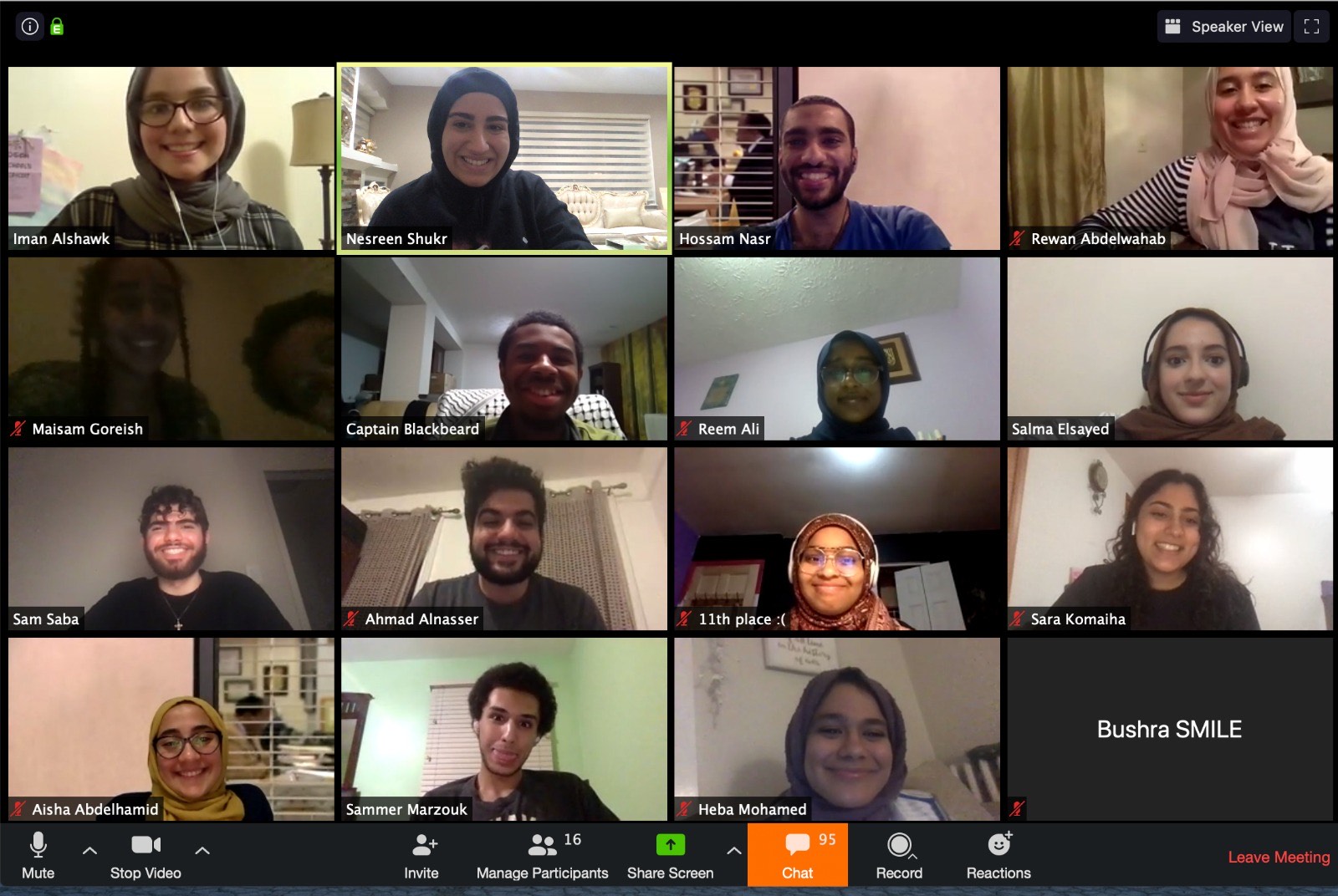 “May Ramadan Bring us Together, but Keep Yourselves at Home”

For Sahar M. Omer ’20, the president of the Harvard Islamic Society, the sudden evacuation of Harvard’s campus in March meant more than the transition of classes to Zoom. The month-long Ramadan celebrations that Omer had planned with multiple committees of peers and faculty at Harvard were suddenly called off. Even a pilgrimage to Mecca, set to take off from Boston Logan airport only days after the University’s announcement, was canceled by Harvard’s Muslim chaplain Imam  Khalil Abdur-Rashid within hours. At Harvard and around the world, faith, along with the rest of life, shifted home.
By Samuel D. Buckley-Bonanno

“We were really hoping that this year, we would have had it figured out. There were full plans. Obviously, that didn’t go as proposed.”

For Sahar M. Omer ’20, the president of the Harvard Islamic Society, the sudden evacuation of Harvard’s campus in March meant more than the transition of classes to Zoom. The month-long Ramadan celebrations that Omer had planned with multiple committees of peers and faculty at Harvard were suddenly called off. Even a pilgrimage to Mecca, set to take off from Boston Logan airport only days after the University’s announcement, was canceled by Harvard’s Muslim chaplain Imam Khalil Abdur-Rashid within hours. At Harvard and around the world, faith, along with the rest of life, shifted home.

The month of Ramadan began on the evening of April 23 and concluded at sundown on May 23. For Muslims around the world, it marks a period of fasting from sunrise to sunset. Each day’s fast is broken by iftar, an evening meal that traditionally begins with eating dates, followed by a communal feast and prayer.

Typically, people would gather together for iftar. “Just having your community around you every single night for a month has always meant a lot to me,” Omer says. “If you go to other places that have very big Muslim communities, it can be thousands of people that you don’t normally see, all congregating together.”

Much of this has been lost in quarantine, as the shared tradition of fasting loses the nightly gatherings that make the celebration communal. “Ramadan is more than just not eating,” Janna E. Ramadan ’23 says. “It matters a lot, especially because I’m not living in a Muslim-majority country. I’m in the U.S — spending Ramadan with other Muslims was the best way to make that up. And you can’t really do that besides with your family now.”

After each meal comes tarawih, a special series of prayers for Ramadan. “Those prayers are the time where you come together with your community. It takes a while — it can be up to an hour — but at the same time, it’s always strengthened me to be with a community of people,” Omer says. Now, however, it’s “me, my dad, my mom; we get up and pray together. And it’s fine; it’s great, but certainly not the same.”

“I feel Ramadan most when I am fasting and still doing the normal things that I would do,” Ramadan says. “If you’re just sitting at home, not eating, it doesn’t feel as impactful. The whole point of Ramadan is that you fast to feel like people who are less fortunate and don’t have access to food consistently.”

In Harvard’s own residence halls, some students continued to endure the statewide shutdown in Massachusetts while isolated from their families, as travel restrictions, fears of spreading the coronavirus to vulnerable family members, and other exigencies prevented their return home. Ramadan, however, says that she’s heard from friends still on campus that a sense of community still persisted at Harvard: “It’s been nice that some of them are still getting together, which is as close to community building as you can do.” For this Ramadan, the bags of halal food served by HUDS at dawn and dusk had to make up for Ramadan apart from family.

But Ramadan says that social distancing guidelines around the world have led to an unexpected effect: The differences between the lifestyles of Muslims in Muslim-majority countries and those living as minorities in other countries have largely evaporated. During a typical Ramadan in Muslim-majority countries, “everything shuts down,” Ramadan says. “The courts will close, government buildings will not be as open as often as they usually are. Restaurants are all closed. Schools take time off. It’s a time where you spend essentially a month fasting at home with family and friends.” This is now the reality faced by Muslims regardless of the country in which they live: “Now it’s how I imagined my family celebrates Ramadan overseas: You’re at home, you’re cooking, you’re doing whatever you have to.”

The Harvard Islamic Society had planned celebrations for Ramadan, but they were cancelled as the student body quarantined itself in homes and dorms. Last year, when the month of Ramadan fell within the academic calendar for the first time in almost a decade, the University organized spaces for iftar and expanded dietary options at morning and evening.

Abdur-Rashid, Harvard’s Muslim chaplain, recounts that last year’s Ramadan celebrations were a resounding success. On the first night, “the line for food went up the street, down the block. Originally there was pizza ordered for 150 people; that ran out in the first 35 to 40 minutes,” Abdur-Rashid recounts.

The iftars that followed continued to draw over 100 people each night. Students and faculty routinely dined side-by-side. Participants were hardly limited to practicing Muslims — “By nature, by intent, every single night it is radically interfaith,” Abdur-Rashid says.

This year, celebrations obviously had to look different. Planners of this year’s Ramadan events at Harvard found help from other faith groups, who gave advice on how to adapt a religious observance to the era of social distancing. With Passover and Easter occurring shortly before the start of Ramadan, the online alternatives that Jewish and Christian faith leaders utilized — such as virtual sermons and remote events — helped inspire the religious programming that Abdur-Rashid and the Islamic Society put on throughout Ramadan.

“Noticing that other religious communities are also trying to navigate this definitely gave us some perspective on what we could be expecting, but also just showed me how people really do come together at times like this and try to make it work,” Omer says.

Each night, after families completed iftar and evening prayers, Abdur-Rashid offered a 30-minute session on the spiritual and ethical values in Islamic scripture, which proved popular with both students of Harvard’s Muslim community and families watching by their side.

“He’s making it honestly as accessible as possible,” Ramadan says. She notes that the organizers understand the difficulties of attending events from home. “They know that people can’t sit around on Zoom for an hour and a half… so they’re making it short.”

“That way, you’re not really taking too much time away from your family,” she continues. “But you’re also able to tune in, have that religious aspect, learn something or review something, and then go back to whatever you were up to.”

Beyond nightly sermons, Harvard’s Muslim community came together during Ramadan via other virtual events — both within and outside of Harvard. These ranged from weekly game nights hosted by the Harvard Islamic Society, to public webinars featuring imams, members of Congress, and recently, the mayor of Cambridge, Sumbul Siddiqui.

Despite the efforts to maintain the community that accompanies Ramadan, it’s difficult to replace real company. “It’s good to see people’s faces over video, but it definitely is not the same,” Bilal Wurie ’21 says.

“Absence makes the heart grow fonder,” he continues. “I’m counting the days so I can get back to campus and see the community again.”

Worldwide, however, it appears that a balance must be struck between community and caution. The typical tagline on Arabic television during Ramadan is “May Ramadan bring us together.” This year, there’s an addition: “but keep yourselves at home.”