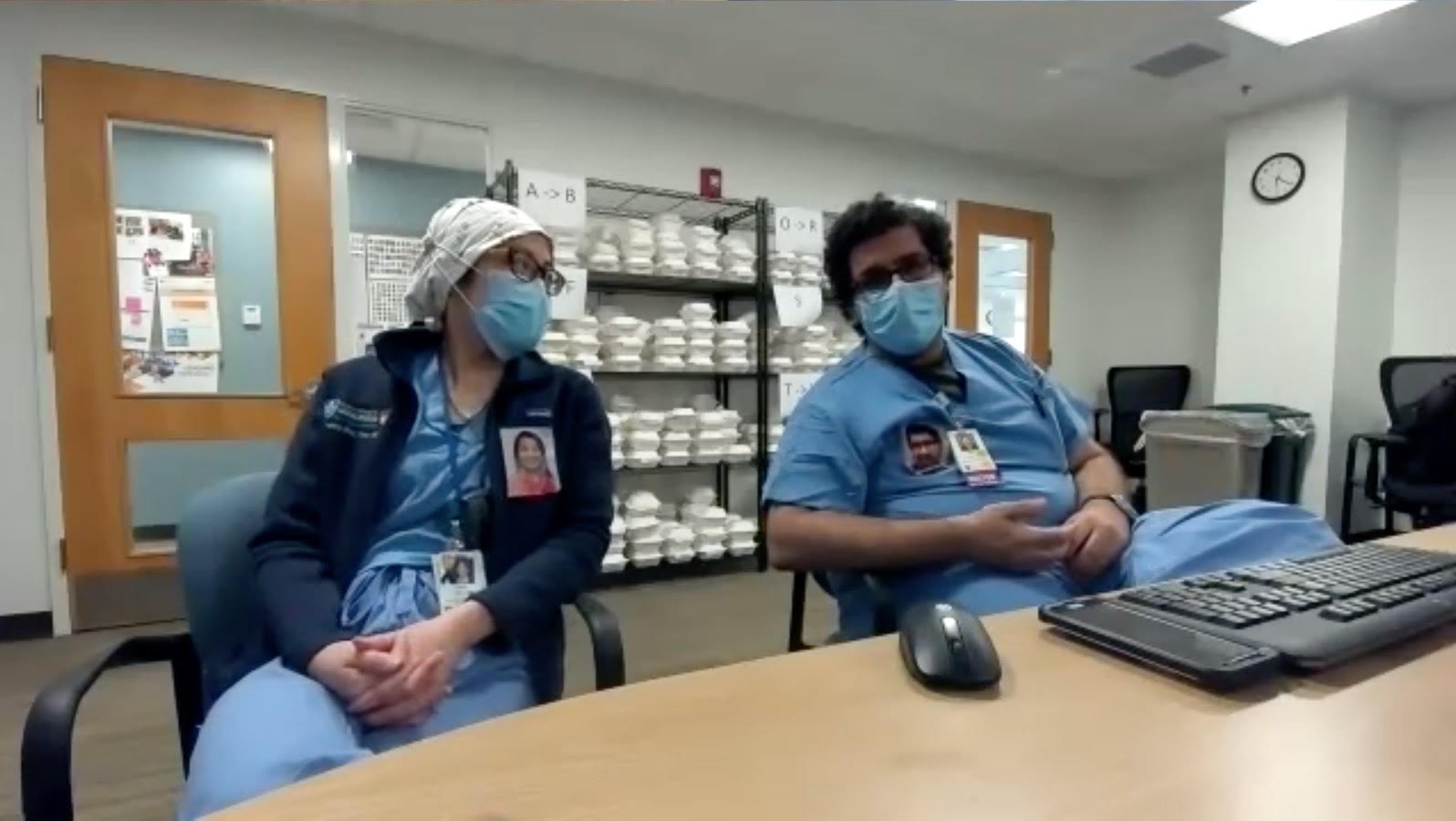 Doctors Sampat and Tran of the MGH Happiness Committee, their headshots affixed to their scrubs as part of the committee's PPE Portrait Project.
Advertisement
Advertisement

The Happiness Committee has existed at Massachusetts General Hospital for several years, but it has taken on an entirely new meaning during the pandemic and has been working to boost the well-being of both patients and healthcare workers alike.
By Harrison R. T. Ward and Alexandra N. Wilson

Hemal N. Sampat of Massachusetts General Hospital pulls his phone out of his pocket and reads out one of his favorite quotes from the film “The Martian”: “Every human being has a basic instinct: to help each other out. If a hiker gets lost in the mountains, people will coordinate a search… This is so fundamentally human that it's found in every culture without exception.”

Sampat suggests that the quote highlights the willingness of communities and healthcare workers to help others and fight for the common good during the COVID-19 crisis; it is in this spirit that Massachusetts General Hospital’s Happiness Committee aims to serve during the pandemic.

Described as a program “by the people, for the people” by its informal director, Kathy May Tran, the committee was originally envisioned as a wellness initiative that would give MGH workers opportunities to bond, relax, and fend off burnout and exhaustion. Prior to COVID-19, the committee arranged outings to events such as baseball games and the ballet and periodically recognized “Happiness Heroes” in the office who contributed positive energy to the work environment.

The Happiness Committee has existed at MGH for several years, but it has taken on an entirely new meaning during the pandemic and has been working to boost the well-being of both patients and healthcare workers alike.

The lives of physicians, primary care providers, and patients are constantly changing during the pandemic, especially for MGH workers, since their hospital has reported the most cases of COVID-19 of any medical facility in New England. With this, patient and provider needs are constantly shifting, and the Happiness Committee is working to adapt to these new conditions.

When the crisis struck MGH, the members of the Happiness Committee held an unprecedented “emergency happiness meeting,” says Sampat, the associate director of the committee. They understood that their pursuit of boosting well-being at the hospital would need to be adjusted to cater to the essential needs of their community.

“Our first goal was to meet basic needs,” Tran says; the committee wanted to ensure providers were fed and had a safe place where “they could quarantine away from their families if they needed to.”

Emily Swanson, a physician assistant at MGH, noticed that one of her patients could not talk to their family after their phone died. Since MGH’s new visitation protocol bars most COVID-19 patients from having visitors, patients’ cellphones are one of the only ways they have of communicating with friends and family or keeping updated on the outside world.

While social distancing protocol and visitation restrictions have isolated patients, providers have been faced with difficult decisions about how best to comfort them. Tran says that witnessing patients say their final goodbyes to their loved ones over the phone has been “heartbreaking,” but the cellphone charger drive at least makes this form of a goodbye possible.

Infection control protocol has all but eliminated these practices, requiring doctors to rethink how they interact with patients and families. When doctors are fully donned in PPE, with masks, hoods, and face shields, their faces are almost invisible to their patients; they look like “cyborgs,” Tran remarks. This makes interactions between patients and providers feel less comforting and more alienating.

In order to help humanize the hospital experience for MGH patients, the Happiness Committee started the PPE Portrait Project — affixing printed headshots of doctors to their gowns so patients can see what their physicians look like without PPE and ideally connect with them on a more personal level.

Working through the pandemic has been a rollercoaster of emotions for the healthcare workers of MGH.

On the one hand, Sampat says there exists a strong sense of purpose and determination, and even a little bit of excitement that they can “take these skills that we have dedicated our lives to and put them to use in a crisis situation.” On the other hand, there also exists a parallel fear for the safety of their families, their patients, and themselves. Sampat suggests that most healthcare workers feel exhausted from their job, and some even feel a bit of guilt because they are scared for themselves.

“How can you feel both of these [opposing emotions] at the same time?” Sampat says, explaining the mixed sense of purpose and fear in the workplace. “What we talk a lot about and what one of the ideas behind [the Happiness Committee] is to help everybody accept the fact that both of those [feelings] are going to exist,” he says. “Whole wellness and whole happiness really involves embracing both of those ideas together.”

The committee's new quest to help MGH employees accept that both their fear and their sense of purpose are valid may make their work more important than ever. Tran and Sampat acknowledge that it is more difficult for healthcare workers to properly take care of their patients when their own mental health is in jeopardy.

— Staff writer Harrison R. T. Ward can be reached at harrison.ward@thecrimson.com. Follow him on Twitter at @Hurrison_.