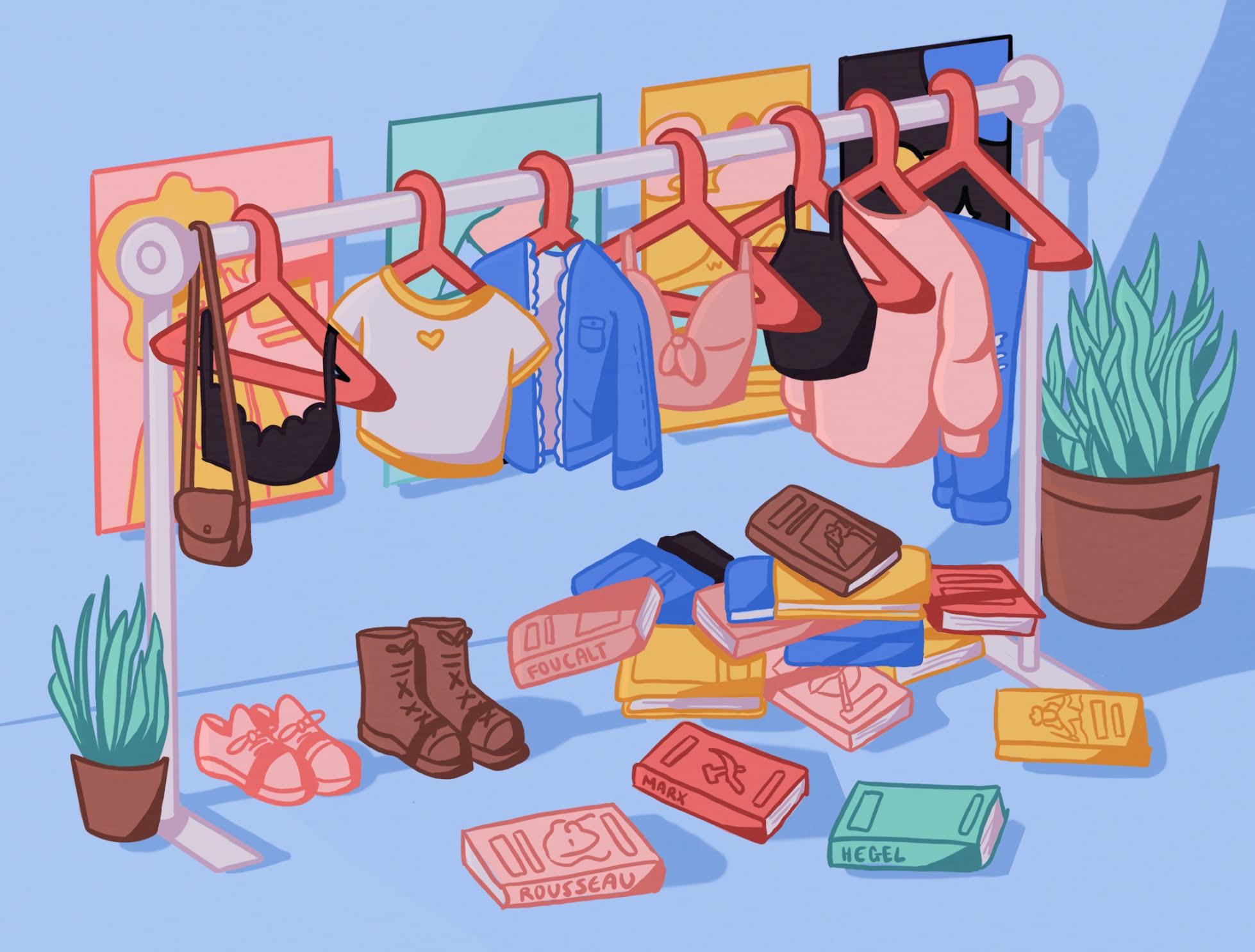 … often, what we’re looking for in these romantic relationships is what we find in each other.
By Josie F. Abugov, Olivia E. Gopnik-Parker, and Elyse D. Pham

During our last dinner on Railay Beach, we went around the table and identified the precise manner in which each of us is funny. The night was salty and humid, the buzz from our cocktails amplified by the pure ecstasy of being 19, and in Thailand, and together. For the past five days, our only concerns had been the devolution of our tans into sunburns and whether we had enough Baht in our wallets to buy passion fruit juice. We laughed a little too loudly and hoped that the tables around us weren’t paying attention.

“We must sound so narcissistic,” we kept repeating, in-between mouthfuls of noodles and detailed descriptions of Vi’s dry humor and Izzy’s absurdly particular vocabulary. “This is the most self-centered conversation. I hate us!”

Of course, we didn’t really, which was why we felt obligated to say it. This was a formality. We needed to affect embarrassment before the discussion could continue on as we always knew it would. First, with a volley of ‘shallow’ compliments for everyone, highlighting makeup routines and study habits and boobs. Then a round of ‘deep’ compliments, followed finally by the ultimate test of how attuned we were to our collective nuances — our varied yet balanced brands of ‘funny.’

“We’re just talking about each other as a proxy for talking about ourselves,” we said, as though this were a revelation. “The world isn’t going to gas us up, though, so we have to.” We nodded vigorously in affirmation. The line is almost scripted at this point — what began as a sarcastic rationalization now a deeply-held truth about the value of group narcissism. Well, not group narcissism generally, but for us. A group of young women who often feel somewhat flattened by the spaces and relationships they enter. Is valuing group narcissism, just for ourselves, narcissistic in itself? Probably.

When we say that no one “gasses us up,” we don’t mean that no one has ever told us that we’re interesting or smart or look good. What we mean is that we want people to recognize and articulate us in the specific way that we see ourselves, the way that we experience our own interiority. We don’t just want to know that someone finds us funny, but how, exactly, we make them laugh. We want a full understanding of our personhood reflected back to us. Kind of like being profiled for a magazine, or, if we’re being honest, writing that profile ourselves.

There is a unique collective high that comes from extended periods of being together — one that was only heightened by being together and far from Cambridge. At a moment in our lives when emotional chaos is often to be expected, time together always leaves us feeling centered, seen, and, in a strange way, deeply gutsy. This, we guess, is what it means to be ‘gassed’ — fumes that not only lift you up, but also push you forward.

Two weeks after that final dinner in Thailand, we are entering a party on Mt. Auburn St., all clad in the same uniform: tiny top, big pants, or, big top, tiny pants. The party leaves us feeling uniquely ungassed. The sense of internal wholeness we had worked up over two weeks alone together seems to get lost somewhere between a shouted attempt at conversation and a spilled drink. Some of us make awkward small talk with past hook-ups, a few of us bump into present infatuations. All of us drink Rubinoff. Eventually, a group text is sent, a few nods are exchanged, hands are grasped, and we pull each other through a throng of familiar faces and into the bitter Cambridge cold.

Over nachos in this case — but also in various common rooms, every dining hall, and far too many supposedly ‘silent’ areas of libraries — we sit down and give each other the same advice back and forth, mostly of the romantic sort.

“You have to be aloof for a few days.”

“Riley, do you want me to hide your phone?”

We assume different roles at different times. One day you might be the advice giver, reassuring that she will text back and that she is certainly not seeing that other girl from her painting Gen Ed. The next, you are curled up on a bench in Winthrop courtyard at 1 a.m., picking at a bowl of brain break cereal and wondering if you’ll hear from him when he takes a semester off. You go to Izzy if you want to be told that even though he ghosted you, he’s just biding his time before professing his undying love over spaghetti in the North End. You go to Jenny if you want to be told that he’s just not that into you, and you need to move on.

We rely on each other to navigate the hallmark ambiguous romantic relationships of college, always grasping for the faraway goal of being “seen” in a relationship. Regardless, what we do know, sometimes subconsciously, is that we will leave this campus having been wholly and authentically “seen” by each other. Countless angsty poems have been written about the sort of sweeping romance unique to college, but often, what we’re looking for in these romantic relationships is what we find in each other.

For a while now, we’ve had a suspicion that there’s something radical in this kind of friendship. But when we say radical, we can’t help but cringe at what that seems to suggest about us. Simply put, none of us are activists and we feel pretty guilty about it. In all honesty, the closest we’ve come to activism is taping a sticky note that read “Hegel’s master slave-dialectic in heterosexual situationships” on the common room wall of a guy one of us was seeing.

What we do see as radical is the cyclical flow of trust and honesty, the simultaneous giving and receiving. We rehash the same issues again and again. We probably know what we need to feel emotionally healthy, but sometimes we text our ex at 2:22 a.m., hook up with him when everyone knows he’s seeing the girl he sits next to in Widener, or tell her we love her before we’re sure we mean it. The day after a mortifying experience, there’s occasionally a fleeting moment where a society-induced notion of what it means to be coveted or cool overpowers what we know about each other. We sometimes hesitate briefly before sharing with the group. But then we remember — we don’t hold judgments against one another. Every distraught or exasperated moment is met with fervent support and energy. For all the stereotypes of female friendships as unstable façades (especially if the women are young, ambitious, or have a sliver of fun), what we’ve actually cultivated is collective care.

When we say the world doesn’t gas us up, we mean that these external forces have no incentive to do so. The self is prioritized at the expense of the collective. The commercialized idea of “self-care” claims that our trinkets and our solitude will pave the way toward self-understanding. But collective care is kinder and more comprehensive than self-care. After a day or two spent alone, bouncing between classes and meetings, and half-eating-half-working in the Adams dining hall, the treat-yourself Tatte shakshuka doesn’t really “hit different,” even though it’s delicious, overpriced, and aesthetically-pleasing.

Instead, it’s the rare Friday night we decide to stay in under the flimsy guise of getting ahead on work. We quickly dog-ear our Social Studies reading in the common room before rewatching the City Girls Act Up music video for the fifth time that week. We walk to Amorino for frivolous desserts and make our way to Kirkland House. After a few hours of half-hearted attempts at academic productivity in between fits of laughter from the self-obsessed yet self-critical humor we clearly pride ourselves on, we crawl into Josie’s mega-bed and turn off the lights. Vi announces that listening to the Ezra Klein Show episode with Ta-Nehisi Coates calms her, so we bizarrely listen to these men as we drift asleep. We feel grounded and whole.

Elyse’s nineteenth birthday party last semester was a purposefully symbolic undertaking, an effort to finally control the guest list and physical space of a large Harvard party. We cared about the party’s execution, but the event itself was deeply ironic. We booked the bedraggled Mather Junior Common Room on a Wednesday from 9:00 p.m. to 11 p.m., created a private Facebook event, and invited over 200 people. Under a collage of Elyse’s selfies, the event description read, “girls are plus1 only, guys bring all your friends.” That night, we assembled in the Mather JCR, prepared for the night to be weird because, for once, we were intentionally making it weird. Two hours later, surrounded by close friends and vague acquaintances, our smoke machine set off the fire alarm for all of Mather House and sent two Cambridge fire trucks barreling down Cowperthwaite St.

— Staff writer Josie F. Abugov can be reached at josie.abugov@thecrimson.com.

— Staff writer Elyse Pham can be reached at elyse.pham@thecrimson.com.

This is one of five essays published as part of FM’s 2020 “Homecoming” feature.