No Shoe, No Problem: Kieran Tuntivate, Male Athlete of the Year

On the second day of the Valentine Invitational at nearby BU, a Harvard runner would make history. Senior cross country and track star Kieran Tuntivate broke the once unthinkable four-minute barrier in the mile, crossing the finish line in 3:57.36.
By William Connaughton 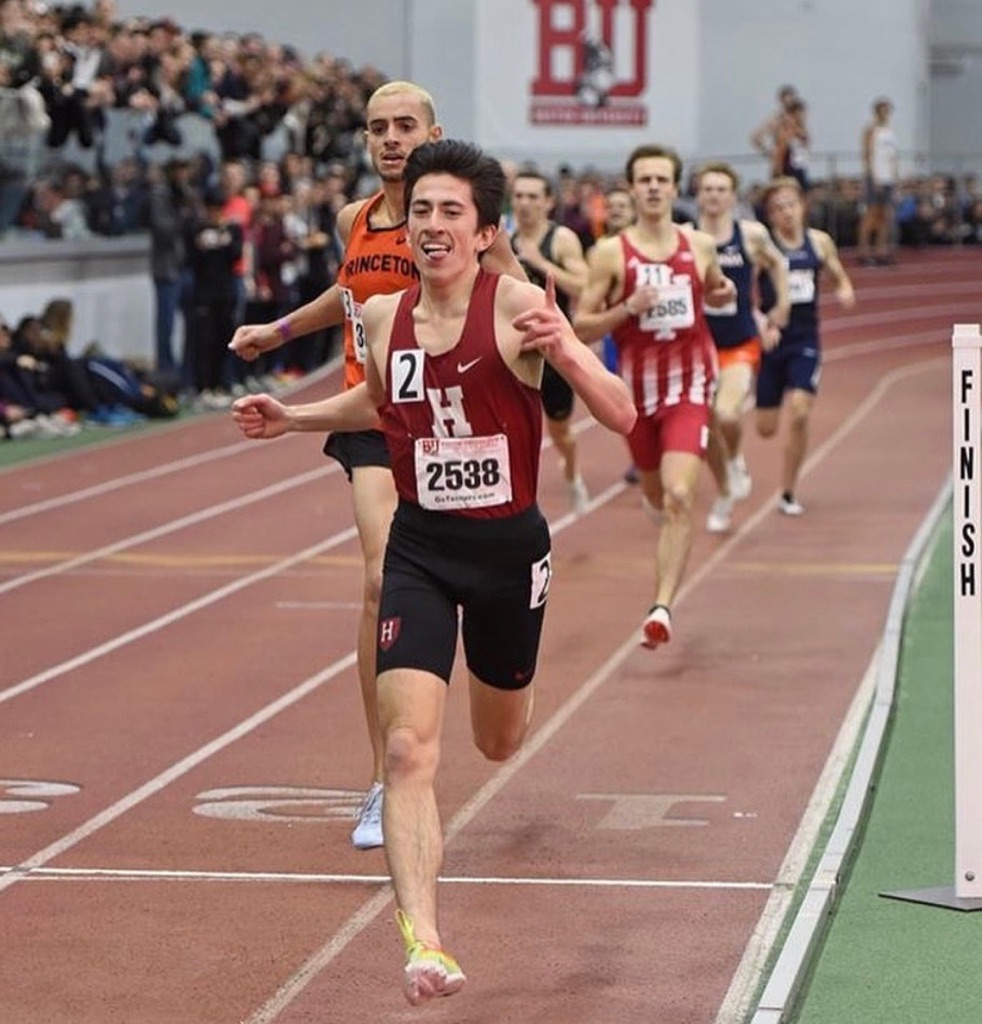 Senior Kieran Tuntivate is all smiles because he can run a sub-four-minute mile. By Courtesy of Brian Panoff

On the second day of the Valentine Invitational at nearby BU, a Harvard runner would make history. Senior cross country and track star Kieran Tuntivate broke the once unthinkable four-minute barrier in the mile, crossing the finish line in 3:57.36. This blistering time set an all-time Crimson record and etched Tuntivate’s name forever into the history books of Harvard Athletics. However, to get a full picture of Kieran Tuntivate’s season, it is best to look back to the end of last year.

Last season, the then-junior made national news when he ran the 3k at the Ivy League Indoor Track Heptagonal Championships in 8:12, winning the race. The most amazing part about this race was the fact that Kieran’s spikes started causing him trouble about 300m into the race, and by 500m, he had ditched one of his shoes entirely. This means that the standout runner ran the remaining 2500m with one shoe, exposing his blistering foot to the track. He closed the race hard, picked up the win, and the following day recovered enough to win the 5k at the same meet. This was the story of Tuntivate last year. The story that pushed us to nominate him to win Male Performance of the Year for the Harvard Crimson as the one-shoe wonder. This year, his shoes have remained on, and his performances have only improved.

Tuntivate made his season debut in a dual meet against Yale on tired legs, having trained throughout the week, placing third behind a pair of Bulldog runners. This trend would not last. The following week at the Battle of Beantown, a 24-team race that included ranked opponents, Tuntivate had one of his best races of his Harvard career. The Delaware product beat the entire field of runners by 12 seconds with a time of 23:58, setting his own personal best in the 8k by over 20 seconds. However, Kieran’s eyes were set on a much loftier goal.

“It’s true I won HEPs last year but our team was second and also missed out on qualifying for nationals,” said Tuntivate following the meet. “I’m motivated because I want our team to win HEPs and get to nationals. I want to do my part in helping that happen.”

After the team secured a second-place finish at the Ivy League Cross Country Heptagonal Championships, Tunitvate was named to the All-Ivy League Second Team. It was on to nationals for the Crimson, who was looking for its best finish as a program in many decades. After a last-minute dramatic change from the traditional course to a road course because of a snow storm, Tuntivate placed second in the 10k with fellow senior Will Battershill finishing just behind in third. This run qualified the team for nationals. 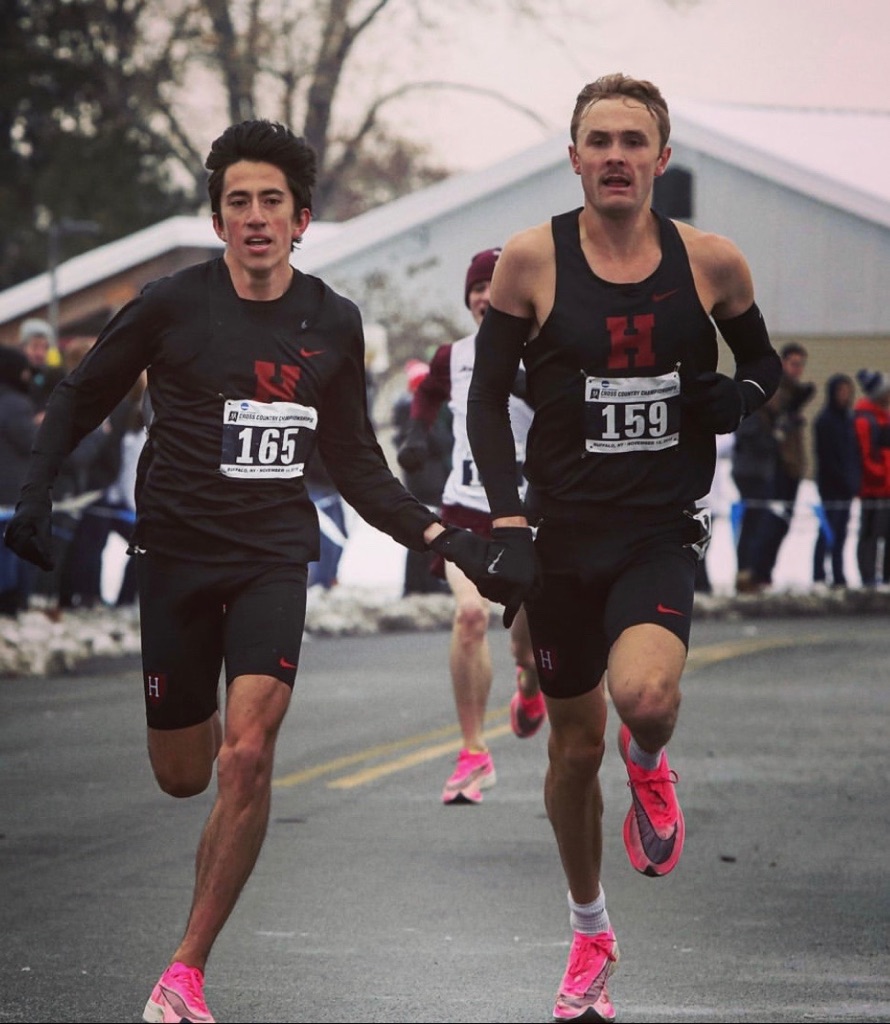 Rugged conditions do not seem to faze Tuntivate considering he has raced with one shoe before. By Courtesy of Brian Panoff

“My favorite moment was definitely New England Cross Country Regionals,” said Tuntivate when asked about his season. “I crossed the finish line next to my teammate Will for second and third and then turned around and saw our freshman Colin Baker get seventh and our four and five guys shortly after. We had high hopes entering that meet but I think the team exceeded them.”

At nationals, the team placed 15th, its best finish since 1968. Kieran led the way in 28th place with a time of 31:12.7. This run was good enough for Tuntivate to be selected as a USTFCCCA All-American, the seventh Harvard runner to receive the honor. This finish ended the cross country portion of Tuitivate’s season, ending the year with many team and individual accolades and writing himself into the Crimson history books. However, his best was yet to come.

On Feb. 17, at the beginning of the indoor track season, Tuntivate had his best race yet. The senior ran a blistering 3:57.36 to win the illustrious mile event, placing second in the Ivy League all-time and ninth in the NCAA for the whole season. This performance topped even his one-shoe legendary HEPs finish the year before and his incredible cross country feats from the season prior.

To close out his season too early, the All-American ran the same race that started his legacy one year prior. In the 8k at the Ivy League Heptagonal Championships, the senior crossed the line in 8:28.90, good enough to win the event for the second year in a row, defending his title from the year before. Battershill again finished right behind Tuntivate in second, another nice moment for the two seniors. Tuntivate went on to win the 5k as well crossing the finish line with a blistering time of 14:20.65. These wins qualified Tuntivate for nationals, which were canceled due to COVID-19. Despite missing out on the chance to run at nationals, Tuntivate’s career as a runner is far from over.

“Personally I want to do well at nationals, I don’t know what event I’ll do but we’ll see,” said Kieran before COVID-19 put plans on pause. “And then I definitely will continue running post collegiately, hopefully, take a shot at going to the Olympics and world championships next year as well.”

Now, having missed out on his chance to run at nationals, Tuntivate’s plans are less certain. Often, nationals are a chance to prove yourself as a runner on a major stage. However, post-cancellation, the now-graduating senior still has goals left in his running career.

“I’m hoping to run professionally,” said Tuntivate when asked what’s next for the standout runner. “I’m applying for grad schools where I could run another year as a backup plan.”

Kieran Tunitvate will leave Harvard with school records in the mile, the 3k, and the 10k. He earned All-American honors in cross country and was named an All-American in the 3k and the mile for track & field. The Delaware product was also a five-time Ivy League Champion and has the best time in the 3k and the second-best mile time in Ivy League history. Tuntivate had a decorated college career for the Crimson and will go down as one of the best Harvard runners ever. In addition, Tuntivate had an impact not just as a performer but on the team as a whole, and his teammates know it.

“I can’t think of anyone more deserving of this award than Kieran. His accomplishments are truly remarkable, but as a teammate, he is so much more than a list of times and races won,” said senior captain Charlie Davis about his teammate. “Kieran’s competitive spirit, dedication, and hard work are infectious. He makes everyone around him better, and we would not have accomplished what we did this year without him. I am very lucky and proud to have been on the same team as him.”

Tuntivate’s commitment to excellence both on and off the track makes him a perfect selection for this year’s Male Athlete of the Year.