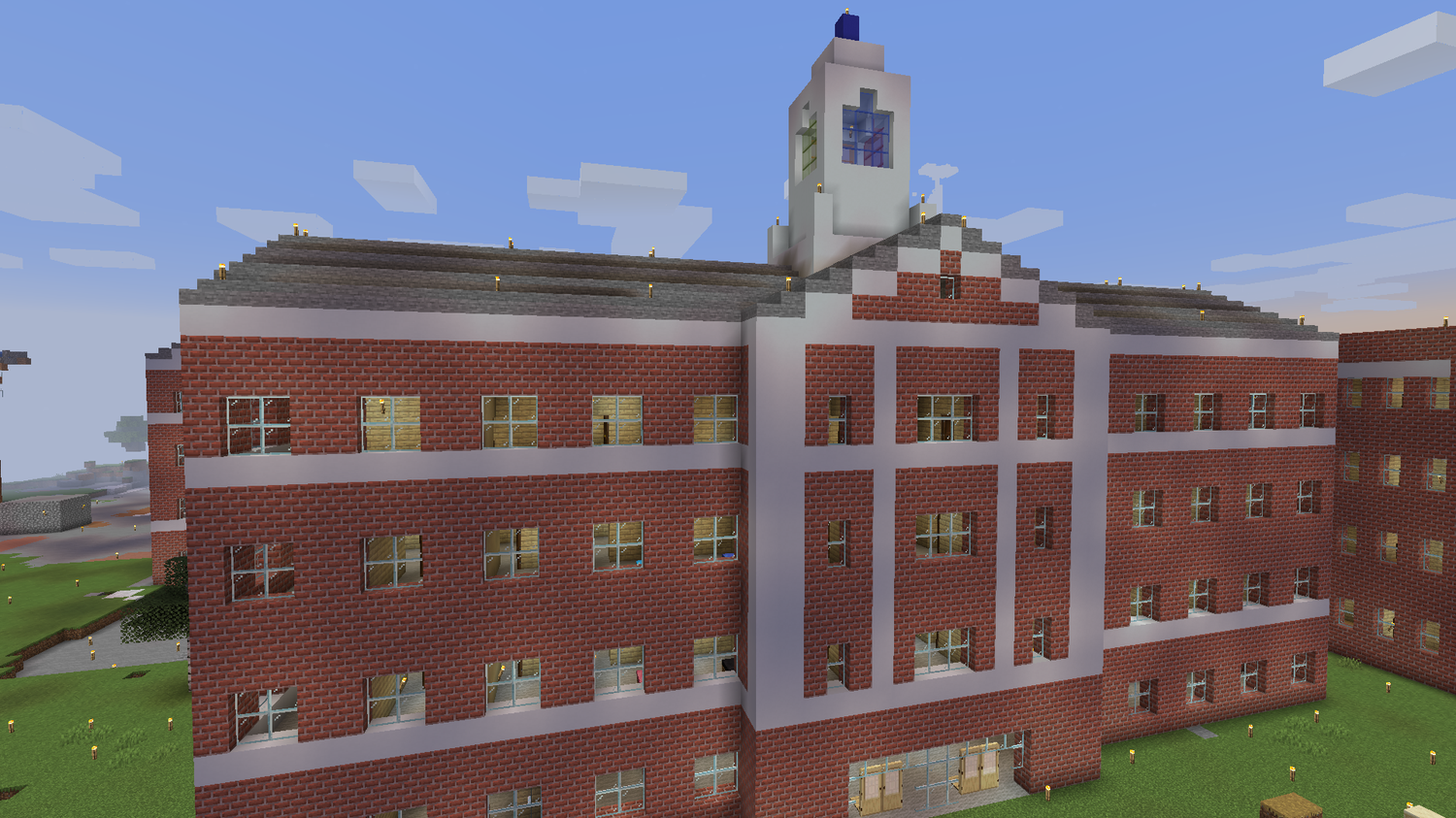 A House, Pixelated, Can Stand

OEGP ventures out to the virtual quad for a virtual tour of virtual Pfoho.
By Olivia E. Gopnik-Parker

I am sitting in my childhood bedroom and looking up at the Pforzheimer belltower. Being sent away from campus in March was, perhaps, an outsized version of being quadded for the entire student body. Google Maps now tells me that the walk to Widener will take me an extra 70 hours, as opposed to the bonus 15 minutes from Pfoho that made my freshman year self shudder. As I sit at my desk, peppered with remnants of high school chemistry tests and college tours of yore, I nearly choke up at the sight of a pixelated Quad Grille.

I presume that this is precisely the nostalgic reaction that a group of tutors and students in Pforzheimer sought to create when they set out to build a scale replica of their house on a Minecraft server — affectionately dubbed “Minecrapft.” Elaine Kristant, a resident tutor in the house, recalls that the idea for the project began at a dining hall table during the madness of those last few days on campus.

“We were just talking about how people are going to stay connected,” she remembers, “and we just happened to be sitting with students that night that really liked playing video games… and we just mentioned, everyone should find a certain video game that they can play together.” Amidst the pandemic, Minecraft quickly became the group’s game of choice. As Kristant points out, “[it's] sort of the comfort food equivalent for video games.”

The project took off once everyone had departed campus and was looking for something to keep them connected to what Francisco Matos ’20, in an email, calls his “wonderful Pfoho pfamily.” Matos, along with Kristant and others, led the charge of students and tutors who spent, as Matos describes, “the next three weeks building the house, every day and night.” The endeavor required “over 10,000 blocks of brick to construct.” They completed the project entirely in the game’s ‘survival mode,’ which entailed collecting all the materials “by hand” — virtually mining, chopping down trees, and the like. 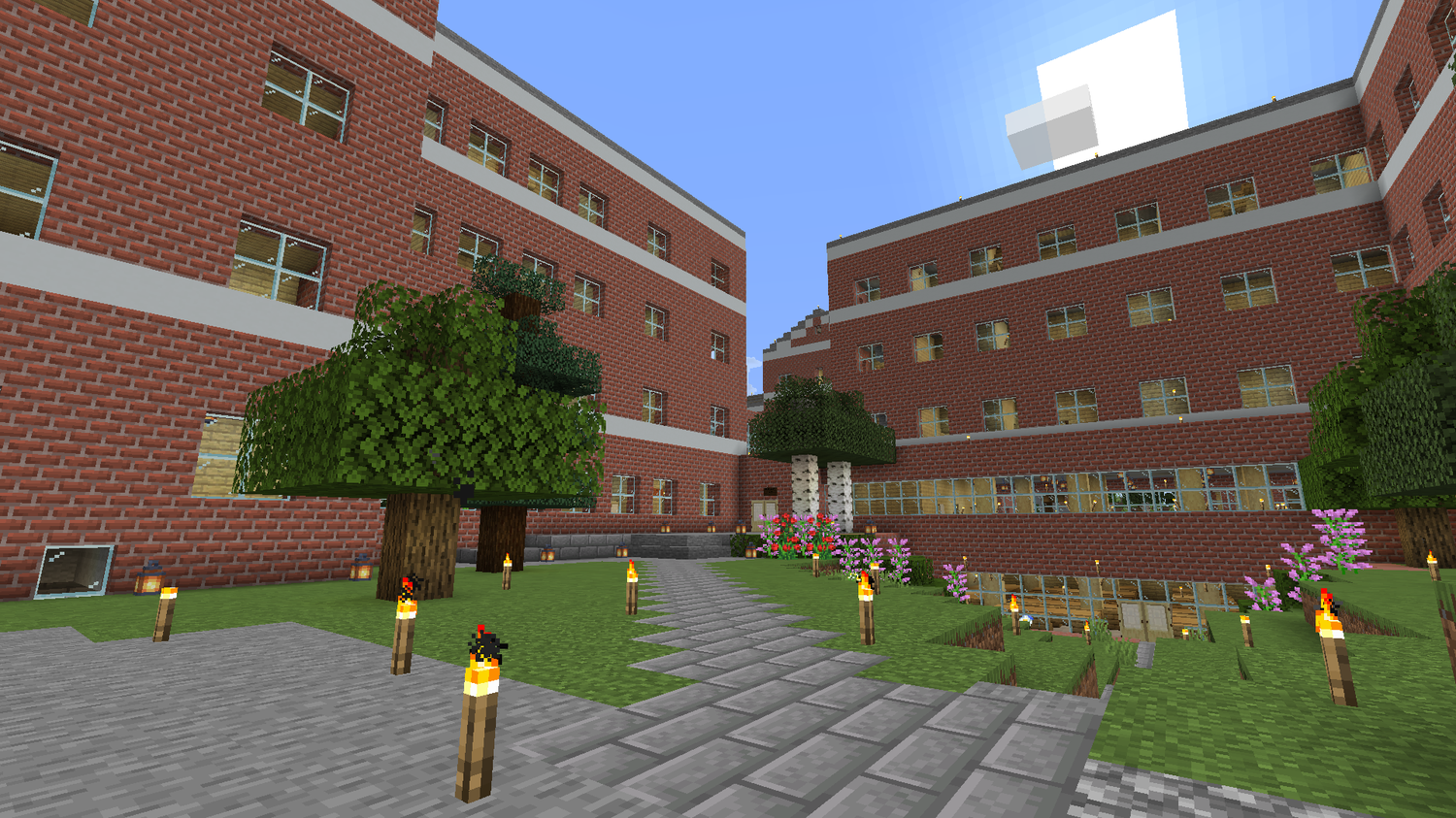 By April 10, when freshmen received their housing assignments via ‘Zoom storming’, the Minecraft version of Pforzheimer House was ready for visitors. By Courtesy of Erik Nook

When the project kicked off, Erik Nook, a sixth year clinical psychology Ph.D. student and a tutor in the house, was busy writing his dissertation from the same floor of Pfoho that once bustled with student activity — a loss he called a “a major adjustment.” “Once I submitted,” he says, “I just spent a lot of time building because it was really fun. It was a nice decompression.” Matos echoes Nook’s sentiment that the game offered respite from the anxiety of the current moment, writing that the project “has personally helped me overcome tons of stress and keep in touch with a lot of my friends from Pfoho.”

In order to best simulate the spaces that house so many memories for Pfoho residents, Kristant took charge of making the replica as accurate as possible. She describes the process of pinpointing the house’s scale as a “mix of using the floorplans we have, Google Maps, and just some creativity.” The result is impressive: Not only did they build the large common spaces, like the Junior Common Room and the dining hall, with precision, but they also constructed all the student rooms — spanning three buildings and five floors — with near exact dimensions.

The Minecrapft team saw Housing Day as their deadline to complete the house. “We were really investing our time up until Housing Day,” Nook explains. By April 10, when freshmen received their housing assignments via ‘Zoom storming’, the house was ready for visitors.

That evening, Pfoho Faculty Deans John R. Durant and Anne Harrington ’82, who would normally preside over an in-person tour of the house, were able to lead first-years on a virtual tour through the halls of Minecrapft.

“We actually had a lot of people log on to watch the virtual tour which was very cool,” Kristant says. 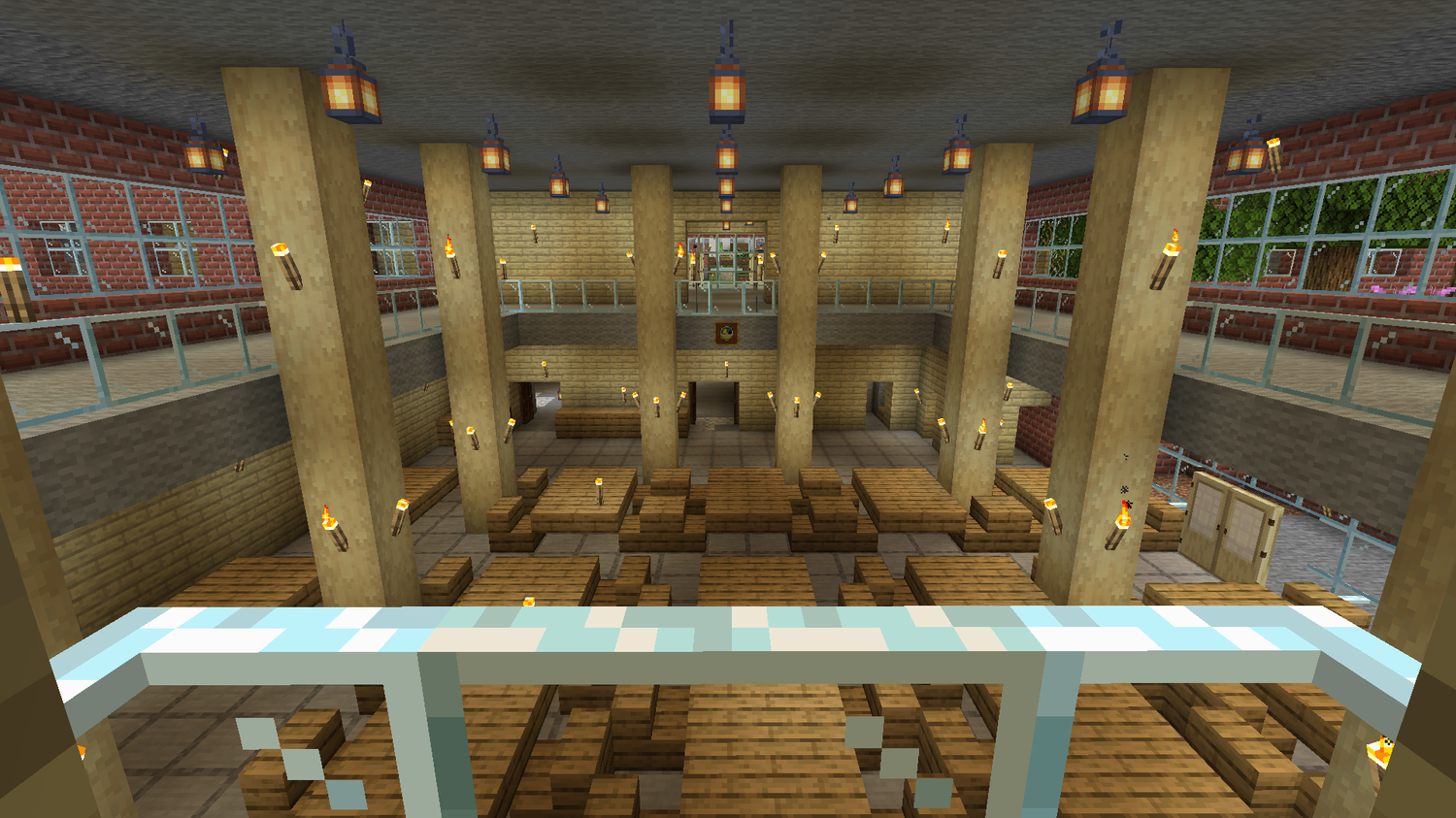 The Minecraft world, composed of rough, earth-toned, 3D blocks, only allows for highly stylized recreations of real world spaces. However, as Nook leads me around the house, his tour reminds me that the majority of memory is composed of fuzzy recollections, not of moments as they precisely were. Night has fallen in the virtual quad as we walk through the memorable Pforzheimer gates, and I vividly remember a December night my freshman year, shivering underneath those arches — having been ejected from the Igloo in an outfit completely inappropriate for a bitterly cold Cambridge night. As we enter the Quad Grille, I recall the sigh which marked the futility of my mozz stick order as I ran to catch the quad shuttle back to my river home.

Creating these sorts of recollections for students is what Nook says has made the project so rewarding. “It really warms my heart when I just hear the connection and recognition in student’s voices when I show them this,” he says. “I just get the sense it brings back a lot of happy memories for them.”

I want to get an overhead screenshot of the house, and Nook tells me this will be best accomplished by harvesting enough wood to build a bird’s eye podium. As we walk to chop our wood, we encounter a few monsters and multiple sheep, no doubt abnormal April afternoon occurrences in the Radcliffe Quadrangle. After building and ascending our podium, it begins to rain profusely in our virtual world, obscuring the house from our view. We chat for a few minutes about the intricacies of defending a dissertation, but the cyber rain will not let up and virtual night time is closing in on us again. I log off, content with the moody aesthetic of the pictures I did capture.

Thirty minutes later I receive an email from Nook, containing an attachment with ‘daytime,’ rainless, pictures of the house. This community spirit — waiting for a virtual downpour to let up in support of someone else’s work — it seems, is exactly what endeavors like Minecrapft can help recreate when we are all flung from the spaces where camaraderie might come more naturally.