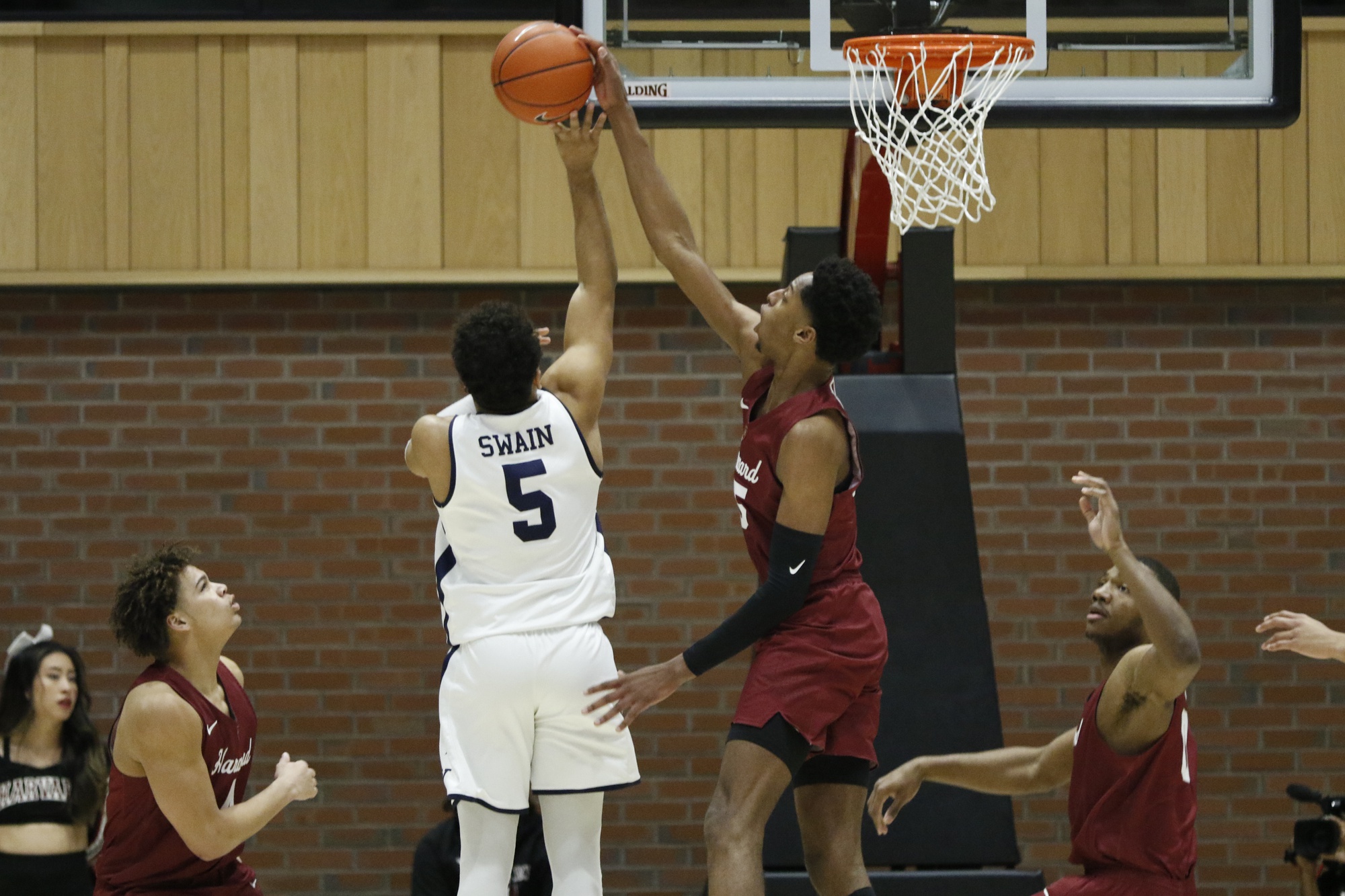 After a lethargic Friday night defeat to Brown, the Crimson had nothing standings-wise to compete for against Yale. Regardless of the outcome, Harvard would play in the 2-3 contest next Saturday in the Ivy Tournament.

But Saturday night’s rivalry contest against Yale was about so much more for these players — pride, self-confidence, and respectability. That message was expressed in the upstairs film room on Saturday morning, where team co-captain Henry Welsh gave a spirited speech to his team.

“Henry gave a great speech talking about what this game meant to him and how important it was, making sure that we are not letting any opportunities pass us by,” senior guard Justin Bassey said, “That really got us fired up and ready to bring our best effort today.”

Coach Tommy Amaker’s words this morning also resonated with the team, who responded impassionately Saturday night in a 83-69 rout of the Bulldogs. The Crimson’s energy permeated noticeably on the defensive end, where Harvard’s Robert Baker and Chris Ledlum combined for six rejections. A bevy of steals — seven to be exact — contributed to 10 fast-break points, highlighted by a Top-10 worthy 360 slam by first-year Chris Ledlum in the second half. 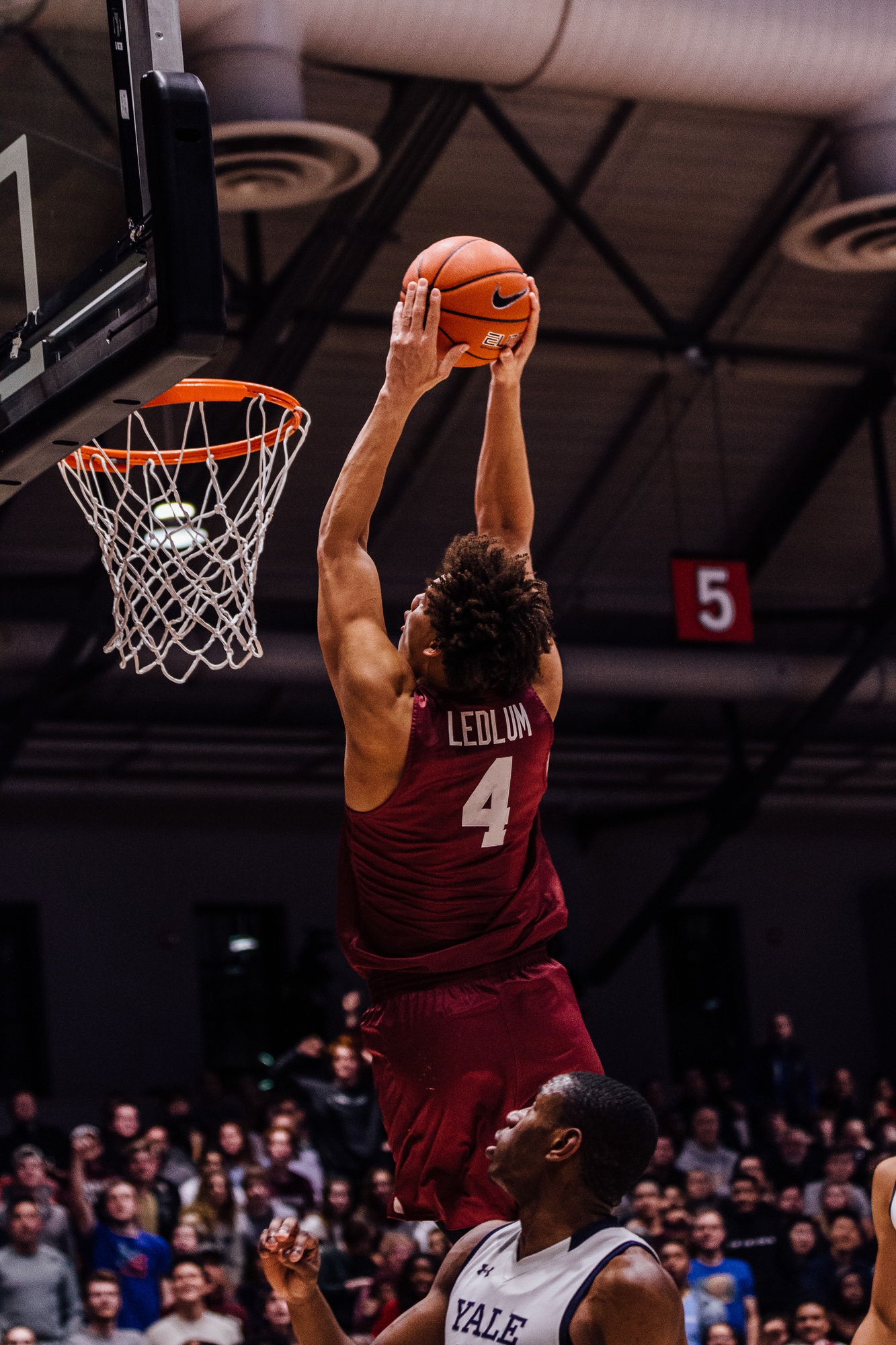 “I definitely think it was [Coach Amaker] putting that fire back under us this morning,” junior guard Rio Haskett said. “He really dug into us a little bit. We watched film and we just looked like, that’s not us. We don’t know what it was, whether us young guys didn’t take it seriously enough for the seniors…. And it started on defense, once our defense is going, I think our offense just feeds off of that.”

With four of its top guards in suits — including sophomore Noah Kirkwood who was ruled out by the medical staff tonight according to Coach Amaker — the Crimson went deeper into its bench, giving sophomore Kale Catchings his first valuable minutes of the season. First-years Luka Sakota and Idan Tretout also earned increased playing time, complementing starters Rio Haskett and Chris Ledlum. Tretout and Haskett both finished in double figures with 11 and 14 points, respectively with Bassey leading the team with 19 points.

“I thought we brought a sense of urgency here,” Amaker said, “We had to beat a very good team, and we did — I thought we did in convincing fashion….I thought we had a great team performance and you can see how the numbers reflect that with playing as many guys as we did.”

Yale’s Azar Swain, who torched the Crimson with 33 points in the prior outing, was limited to a 3-of-11 night for 13 points, while senior Jordan Bruner was quieted to a four-point game. The two teams matched up evenly in the opening frame, but a surge of momentum beginning with a Lewis fast-break dunk with about seven to play provided the defensive spark Harvard badly needed. Baker’s four blocks all came in that energetic span of four minutes.

“A lot of [Baker’s] blocks, he’s not just sending it to the stands,” Bassey said. “He’s blocking it and someone’s coming up with it or someone else is grabbing it. That allows us to get up the floor and get it quick.”

Harvard built up a double-digit lead within the first two minutes of the second frame, seeing easy opportunities at the rim. Sophomore Mason Forbes was the beneficiary of two alley-oops, while Haskett drained two deep triples to extend the Harvard lead to 17. Shooting 3-of-4 on the night from long range and a career-best 38.8 percent this season, Haskett has quickly become a crucial contributor on the offensive side for the Crimson.

“Over the summer, Coach told me to work on my shot and work on my form,” Haskett said. “So that’s really all I worked on, it was really just my guide hand...he said if I’m open and I catch that ball, shoot — don’t think about it.” 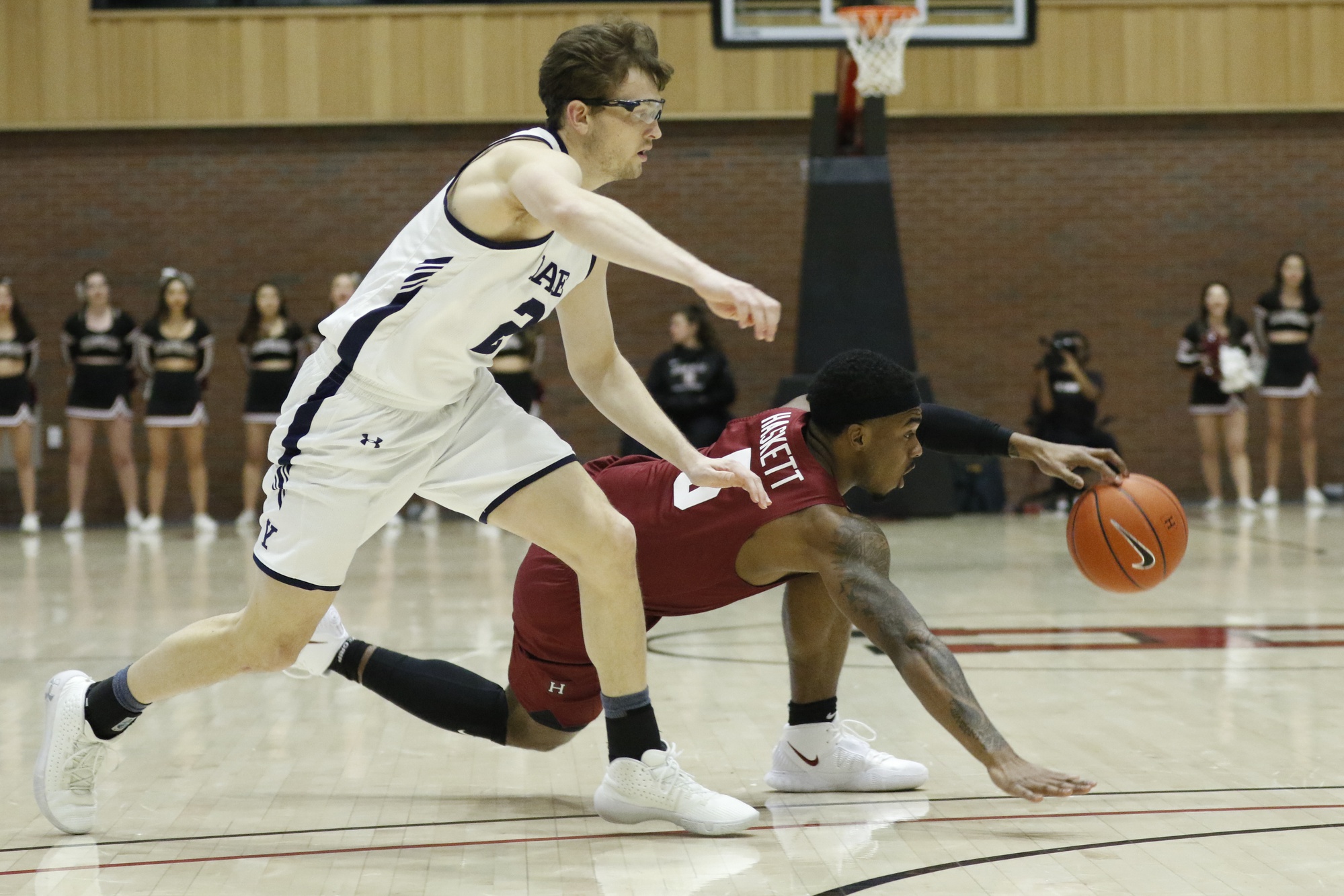 A series of layups at the rim by Yale’s Paul Atkinson — who finished with a team-high 23 points — kept the Bulldogs within striking distance, but the contest was all but decided heading into the final media timeout with the Crimson leading by 18. Harvard concluded the contest with 12 assists and a 69.6 field goal completion rate in the second frame.

“Tonight is one of those ones where you can really put in the bank and refer back to at some point, and talk about and use it,” Amaker said. “Get them to completely buy in or believe in it. It’s a constant ongoing process. But you need these moments that when they’ve done it and they’ve done it well… it serves its purpose down the road.”

Harvard will play Princeton in the Ivy Tournament semifinals next Saturday at 2pm. Outside of Friday night’s loss to Brown, the Crimson have not lost at Lavietes Pavilion. It needs two more wins at home — potentially the second one a rematch against the Bulldogs — to go dancing.