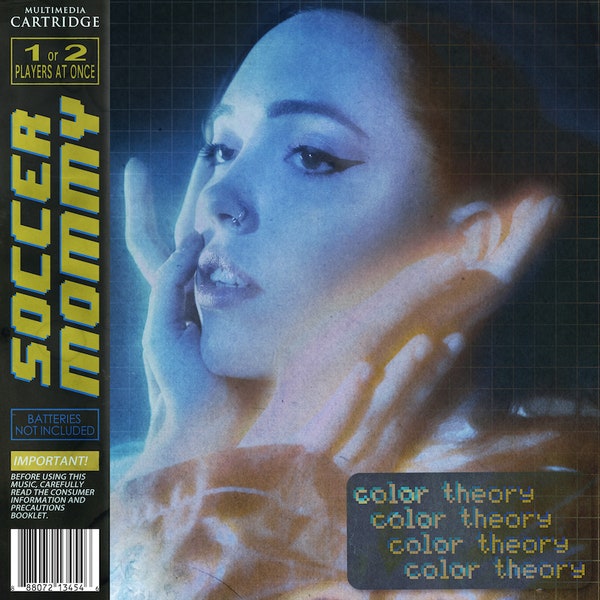 Sophie Allison is a tough act to follow. The singer-songwriter, who performs under the name “Soccer Mommy,” garnered critical acclaim for her visceral gut-punch of a debut album, “Clean,” in 2018. On her sophomore album “color theory,” released Feb. 28, Allison doesn’t pull her punches, but she does hesitate before delivering each one. The infectious melodies, intricate production, and biting lyrics that made “Clean” so intoxicating are still present, but with more introspection. Trusting her instincts and turning her critical eye inward, Allison doesn’t fight the sophomore slump. She embraces it.

The slump, in this case, is emotional. Allison’s musicianship is no less deft, but her subject matter is more fraught, creating a captivating dissonance between her ambivalent intonation and aching lyrics. Nowhere is this clearer than on “circle the drain,” the album’s stunning lead single. “I wanna be calm like the soft / Summer rain on your back / Like the fall of your shoulders,” Allison sings in the first verse, masking the seriousness of her subject matter with a country-rock love song beat à la Taylor Swift. But “circle the drain” is deceptive. The melody continues to swell and expand as Allison’s mental health deteriorates. “’Round and around, ’round and around / Circle the drain, I’m going down,” she sings in the chorus. The resigned lyric floats above layered sounds of guitar, percussion, and bubbling water. It’s a master class in calculated angst.

Where “Clean” was seamless, “color theory” is bumpy. The transitions from song to song are often abrupt. The subtle edge of the opening track, “bloodstream,” jumps into the searing whine of “circle the drain” and the blunt, a capella opening of “royal screw up.” The sprawling, seven-minute track “yellow is the color of her eyes” is the album’s solid center. It is a record that, by all accounts, should not work. Gratuitously long songs, no matter the talent or skill of the artist, are rarely done well, but Allison pulls hers off. Grounded by her steady strumming and laissez-faire vocals, the song strikes gold in its outro. “Loving you isn’t enough / You’ll still be deep in the ground when it’s done,” Allison croons as her guitar whines, coalescing with the plucking of a harp and hum of a subtle keyboard. Rather than lying stagnant, the song’s seven minutes pull together the album’s disparate motifs. The anxiety of “crawling in my skin” folds neatly into the song’s orchestral opening while “up the walls” crawls out of its delicate finale. The album’s individual tracks may struggle to find a cohesive sound or style, but each song’s individuality is reconciled by calling back to the themes of “yellow is the color of her eyes.”

Allison is often praised for sounding wise beyond her years. Her high-pitched, sardonic vocals and tendency towards wearing youthful pigtails are tempered by self-aware lyrics and balanced instrumentation. On “color theory,” she lets go of some of this balance. Tracks like “royal screw up” and “stain” are quick and dirty, their sound sparse save for Allison’s vocals and heavy-handed strumming. They’re beautiful on their own, but appear uneven when set against more cohesive tracks like “lucy” or “night swimming.” This is a trade-off for which Allison is unapologetic. In an interview with Pitchfork, Allison said, “I wanted the album to have this incline in energy and then drop into full emptiness.” The album’s sparkling but solemn closer, “gray light,” does just that.

“color theory” does not succeed in spite of its contradictions, but because of them. It is brilliantly oxymoronic, constantly subverting its own lyrical and instrumental inclinations. The album’s sound is layered and distorted, but its lyrics are crystal clear. They are most beautiful when they articulate Allison’s lowest emotional points without sacrificing the tempo, as though the music itself might be a means of pulling herself out. It’s like she sings in “bloodstream”: “Happiness is like a firefly on summer free evenings / Feel it slipping through my fingers / But I can’t catch in my hands.” On “color theory,” Allison can’t quite catch herself. She lets her guard down. She flickers. But she never burns out.