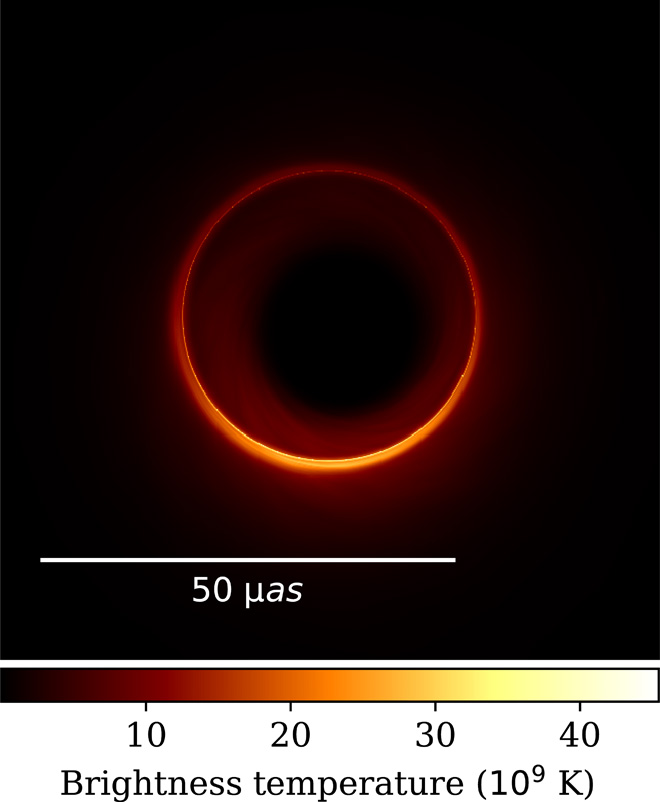 A team of Harvard scientists and others produced refined simulated images of a black hole in research published this month. By Courtesy of Michael D. Johnson et al.
By Simon J. Levien and Austin W. Li, Crimson Staff Writers

A team led by scientists at the Harvard Black Hole Initiative published an article Wednesday outlining a method to simulate sharper images of a black hole.

The article was published in the peer-reviewed academic journal Science Advances. It comes less than a year after the Event Horizon Telescope, a collaborative network of telescopes around the Earth, visualized a black hole for the first time.

Physics professor Andrew E. Strominger ’77, the Black Hole Initiative’s assistant director of theory and a core collaborator on the paper, emphasized the theoretical motivation for studying black holes in this paper.

“There is a question of what's the information in the [Event Horizon Telescope] image? What do you learn out of black holes?” he said. “What's the universal physics in this?”

After the Event Horizon Telescope released an image of a black hole in April 2019, a group of Harvard scientists convened to discuss both refining the image and theoretical explanations.

The researchers used an image rendering method called ray tracing commonly found in computer graphics. The technique can “produce the image that a distant observer would see if a black hole was lit up,” lead author and Harvard-Smithsonian astrophysicist Michael D. Johnson said.

Black holes amass subrings of photons, or particles of light, due to the black hole’s gravitational pull. These rings of bent light form a spherical “photon shell” around the black hole, which can then be visualized using computer simulations.

The simulations were the result of theoretical calculations.

“The structure was reproduced on a computer, but if you don't know what to look for with a computer, you'll miss it,” Strominger said. “It has to be something that you can explain with pencil and paper and understand. And when we set out to do that, we found… that it wasn't just one ring, but then we realized that there must be infinitely many more.”

That observation led to more precise calculations in the numerical image, which then produced sharper pictures of the black hole.

Co-author Alexandru V. Lupsasca ’11 said the new technology will help scientists better understand the core properties of black holes, such as their mass and spin, which elude astrophysicists.

Lupsasca likened black hole imaging to “sitting in New York and trying to take an up-close picture of a quarter in LA.” He said the scope of that challenge is why computer simulations are necessary to further refine the image.

Johnson credited the team’s success to their unique three-pronged approach, putting experts — theoreticians, researchers specializing in simulations, and those focused on observations from the Event Horizon Telescope — who do not usually collaborate in the same room.

“These are three communities that don't normally talk to each other very much. And we're all trying to take the end result of research that we've been working on for years or even decades,” Johnson said.

Strominger also emphasized that the experiment brought experimentalists and theorists together.