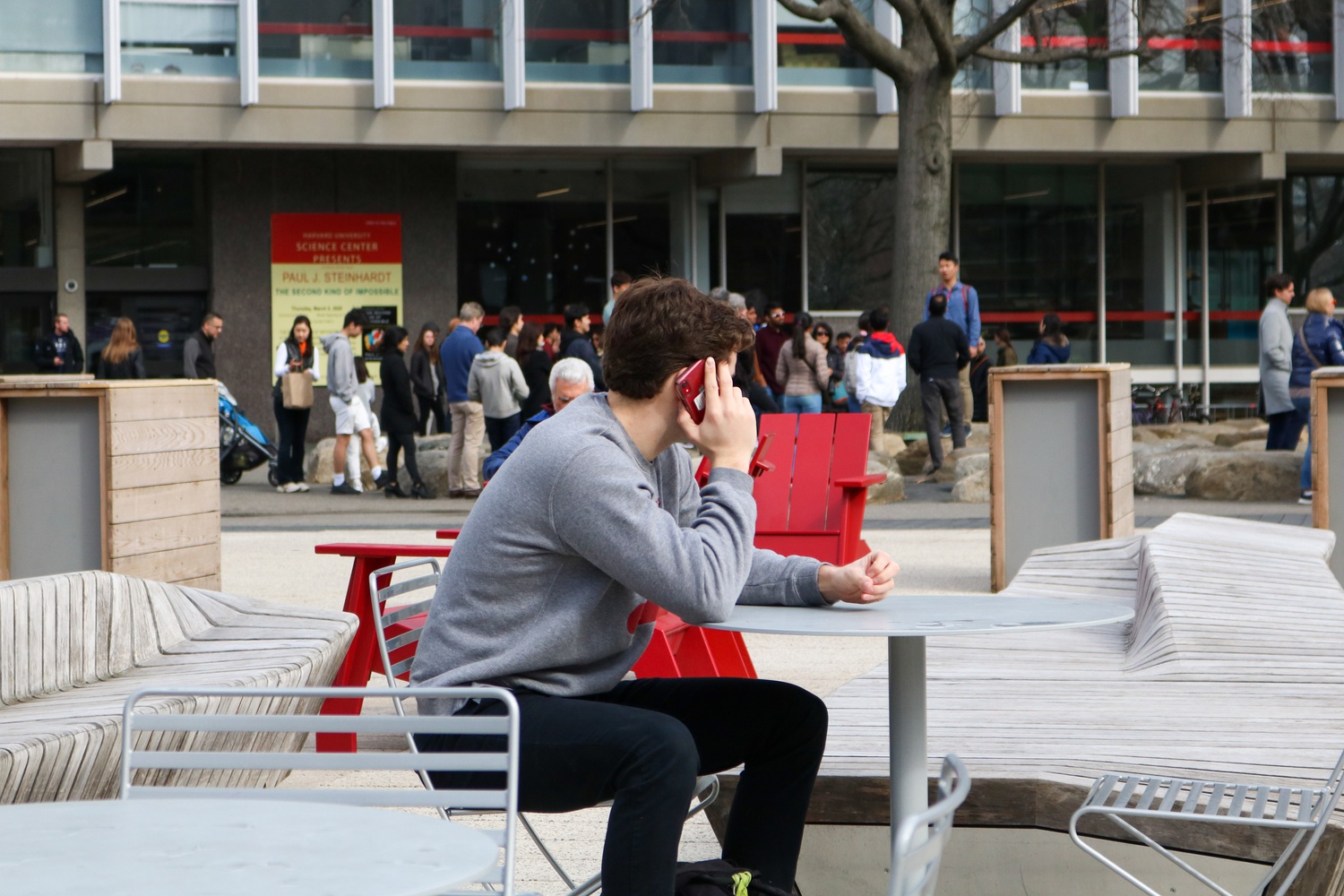 A Harvard undergraduate talks on the phone in the Science Center Plaza, reacting to the University's decision to send undergraduates home due to the coronavirus outbreak. By Jonathan G. Yuan
By Juliet E. Isselbacher, Crimson Staff Writer

Several disgruntled parents of Harvard undergraduates, who were instructed to evacuate campus by Sunday, have started a petition lambasting the College’s “unfair” and “unilateral” mandate.

Self-identified Harvard parent Olla Birman created the petition on Change.org Tuesday, which has since garnered more than 140 signatories as of Wednesday evening.

“Parents of Harvard College students disagree with the College [sic] unilateral decision to close its facilities to students and to send them home. In these unprecedented times students should be allowed uninterrupted access to college education and college services,” the petition reads.

The petition further demanded Harvard retract its “unfair” mandate for students to evacuate by Sunday.

“It’s up to you to show leadership in hard times, and not to run for cover,” it concludes.

Dean of the College Rakesh Khurana wrote to undergraduates Tuesday morning that dorms would not reopen after spring recess under the threat of a looming coronavirus pandemic.

In the aftermath of the announcement, several parents expressed frustration with the College over what they characterized as sparse communication and sequestered decision-making during a time of crisis.

Renée Wetstein, the parent of a senior, said she was “concerned” that the College did not engage students and parents in its policy-making.

“I just question this decision — how it was made, how it was told, and is there any way to reverse it? Because if this is gonna end in two or three weeks or four weeks, why do people have to take their belongings with them? That, to me, is insanity in terms of the expense,” she said. “Why can’t belongings be left in houses? Decisions like that make no sense to me.”

“I feel like whatever the decisions, the thinking has not been provided to students or parents,” Wetstein added.

Other parents said the mandate lacked the nuance student and parent feedback could have supplied.

Durga Kalavagunta, the parent of a senior, wrote in an email that the administration could have done better to consider “all sections of the population” in their decision-making.

“I can only speak to the community of the class of 2020… who are Seniors and were very much looking forward to enjoying the last couple of months of their college experience,” she wrote. “I hope the administration will consider the Senior[s'] experiences more seriously.”

Yun Shen, another Class of 2020 parent, wrote in an email that the decision to evacuate undergraduates was overly “dramatic” and a “man made disaster.”

“This was an absolutely hasty and irresponsible as well as inconsiderate decision,” Shen wrote. “It was made without differentiating the real situation and different needs of different student communities.”

“Obviously, we can take him in,” Wetstein said about her son. “But I’m sure there’s families that financially it’s going to really impact them to have a child back home that they didn’t expect to be home.”

Beyond saying the College was not communicative or considerate in their decision making, parents further charged the College with actively endangering students and their families.

“These students are being sent out, getting on airplanes, potentially affecting more people that could be at a higher risk, going home, potentially infecting parents, affecting younger siblings, affecting grandparents,” she said.

Vania Winters, who is also the parent of a senior, said a forced evacuation imperils students from high-risk areas.

She added that since her family is based in Washington state — a current coronavirus hotspot — she instructed her son to stay with friends and not come home.

“He has a choice. He has connections, and he can do that, and our thoughts go to the kids that don't have that,” Winters adeed.

College spokesperson Rachael Dane wrote in a statement that, per Khurana’s email to students, Harvard’s commitment to the health of its affiliates and its responsibilities to the “larger community” guided the decision.

“Public health experts have advised us that the best way to delay the virus transmission and to contain any breakout is to decrease the number of people on our campus, and as a result, the decision was made in a timely manner and communicated as soon as it could be,” Dane wrote.

Winters said that, in this uncertain time, she is anxiously awaiting information about contingency plans for commencement.

“What about graduation? The big celebration that we all have been waiting for for years,” Winters asked. “Not one word.”