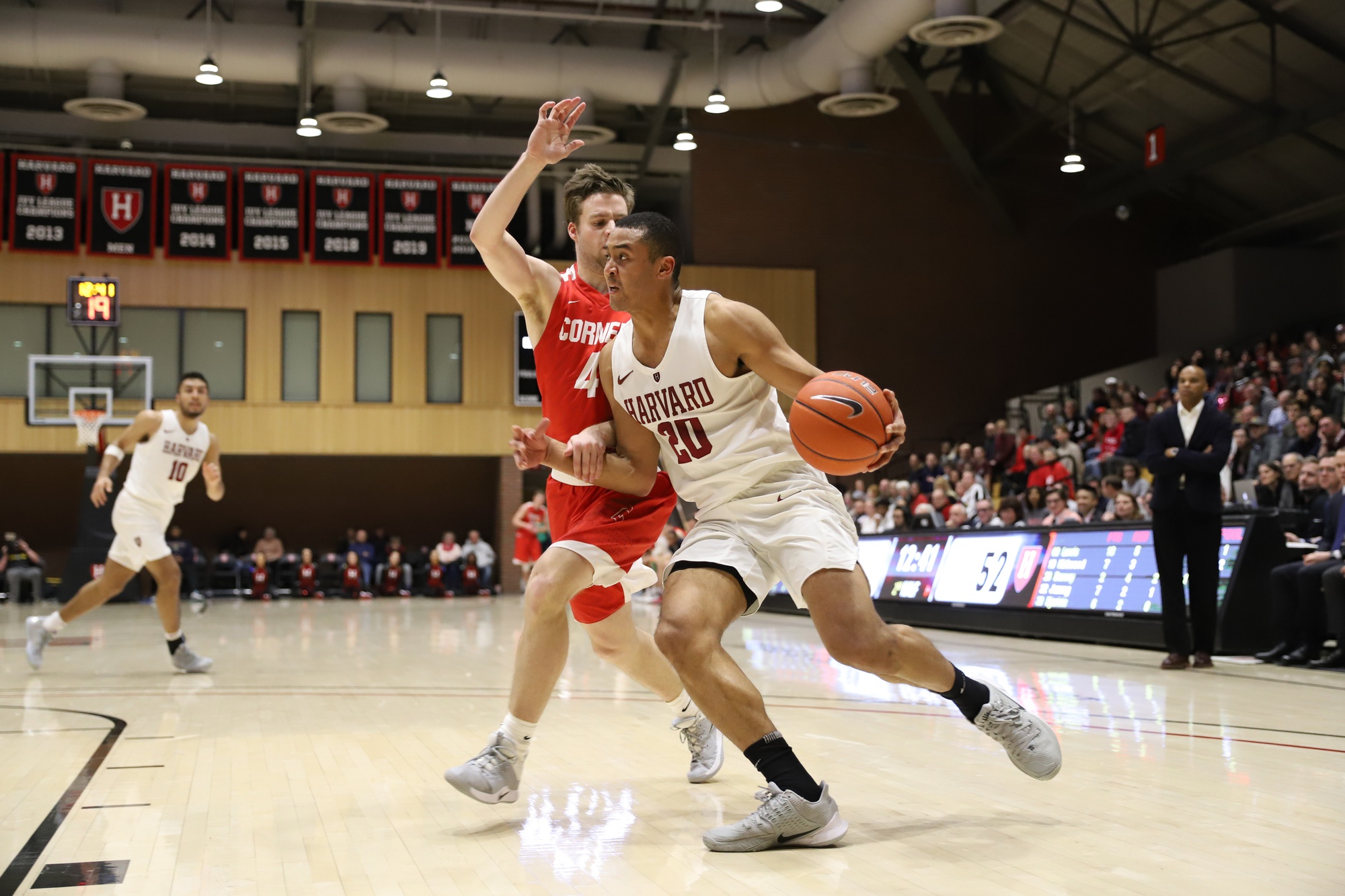 The Crimson will be one of four teams to compete for an NCAA Tournament bid in two weeks. By Quinn G. Perini
By Henry Zhu, Crimson Staff Writer

For any recordkeepers, Harvard’s Saturday night victory over Cornell was a good night.

The Crimson earned its 20th win of the season, its most since the team last made the NCAA Tournament in 2014-2015. Coach Tommy Amaker also notched his 250th career win at Harvard, one that formally clinched one of four spots in the Ivy League Tournament.

But despite the important result, the 67-58 victory was hardly one in which the Crimson’s all-time winningest head coach will likely remember by the time the team disembarks from its 5-hour bus ride back to Cambridge.

“Not pleased with our overall performance and how we played, but certainly winning on a Saturday night in our conference, on the road, is something to be proud of,” Amaker said. “But I’m certainly not proud of our 19 turnovers, we just looked disjointed.”

The two sides were toe-to-toe for much of the first half, as a Harvard side possessing much stronger talent struggled to break free to a more comfortable margin. Timely triples from Big Red guards Bryan Knapp and Dean Noll kept the Crimson lead to just one at the 5:26 mark of the first frame. Without star forward Jimmy Boeheim for the second straight week, Cornell relied on its guard play for the bulk of its scoring in the contest.

But a timely 8-2 run to end the half — compounded by a string of four triples from Harvard’s Rio Haskett, Noah Kirkwood, and Danilo Djuricic to kick off the latter frame — seemingly brought the Crimson back to its contest at home against the Big Red, in which it cruised to an 85-63 win. The Crimson widened its margin to 20 with 13:44 left to play, benefiting from the slashing of first-year Chris Ledlum.

The Big Red, sensing a need to disrupt Harvard’s flow, subsequently bulked up its full-court press and zone defense. Without senior floor leader Christian Juzang, who suffered what appeared to be a right foot injury the night prior against Columbia, Harvard struggled to maintain its composure in the latter part of the second frame.

Committing a total of 11 turnovers in the final 13:20 of the contest, the Crimson saw its lead dwindle to single-digits by the six-minute turn and failed to score a field goal in the last 11:33 of play.

Saving Harvard from further trouble was its accurate free-throw shooting. Hitting 19-of-25 in the second half including 16-of-20 in its dry spell, the Crimson kept Cornell separated by at least seven points to conclude the contest.

“We can’t put all of that on not having Juzang,” Amaker said. “But a lot to learn, and a lot to get better from, but I am proud of our guys winning on Saturday night.”

Junior guard Rio Haskett knocked down three triples in the contest and finished in double-digits at 11 points for the second straight game, while senior Robert Baker contributed a dozen to lead the visiting side.

Harvard sits tied in second-place and a game back from Yale in the Ancient Eight table after the Bulldog’s perfect 2-0 weekend over Penn and Princeton. If both teams can take care of business on Saturday against Brown and Dartmouth, respectively, the Crimson will have a chance to earn a share of the title against the Bulldogs on Saturday night.