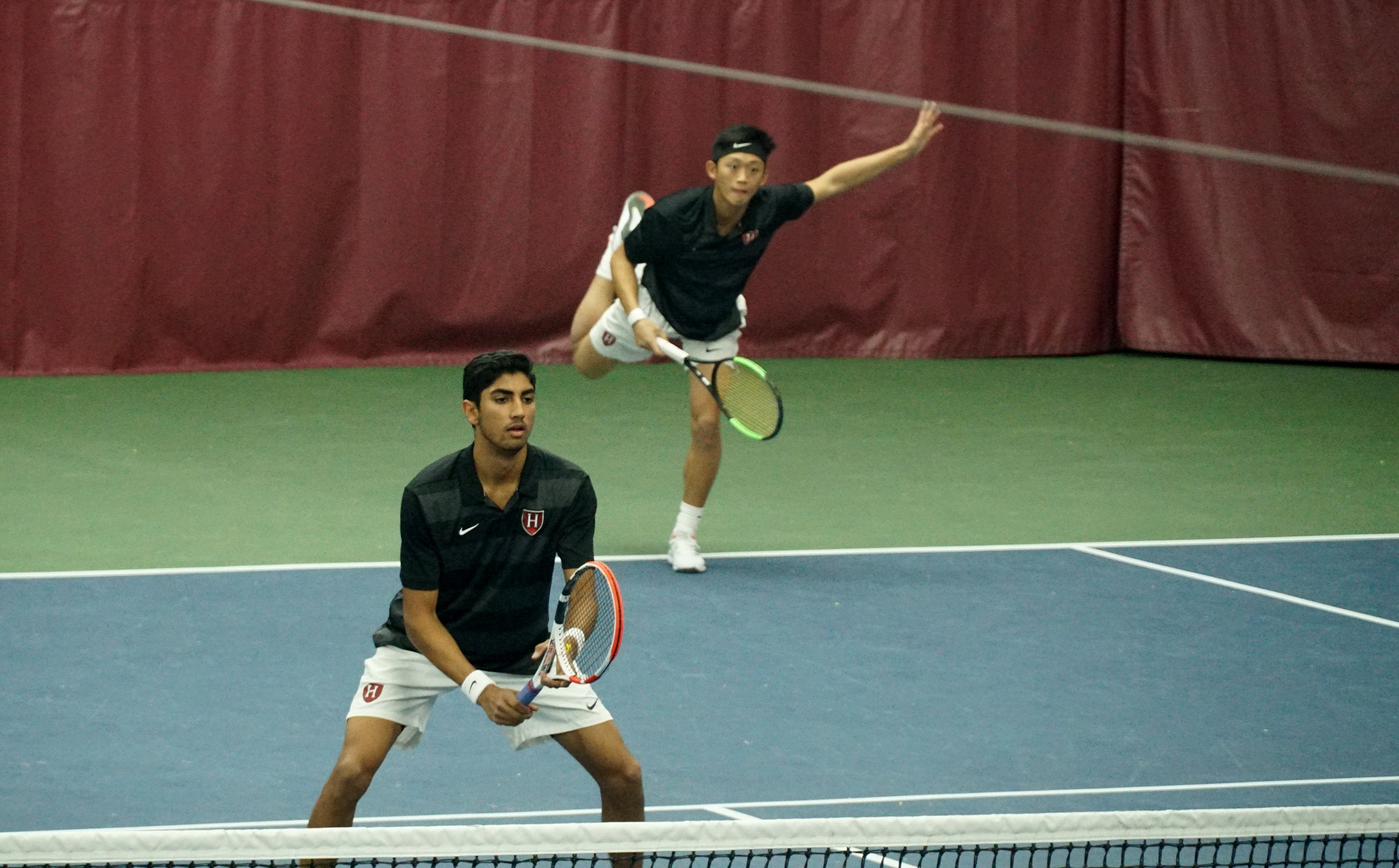 First-year Ronan Jachuk (front) awaits the opponent’s return as sophomore Brian Shi (back) delivers a serve in the Harvard victory over Rice. Combined with the women’s team, Crimson tennis would go a perfect 3-0 on the weekend. By Zadoc I. N. Gee
By David Aley, Crimson Staff Writer

On Super Bowl Sunday, the Harvard men’s and women’s tennis teams were far from focused on the primetime event later in the day. On their minds was the goal to rattle off more victories and keep the momentum going into later crucial matchups. And the focus paid off, as the Crimson teams dominated their competition in quick fashion.

Harvard (3-1, 0-0 Ivy League) faced off against the women of UMass-Amherst in a Sunday morning contest and earned a clean 4-0 sweep. The match started off with two wins on the doubles court, with a duo of senior captain Natasha Gonzalez and sophomore Rachel Lim winning their matchup 6-4, and the pairing of two first-years, Kayla Leschly and Mihaela Marculescu, also defeating another UMass duo 6-0.

“We’ve been trying out some new teams and we put in some first-years which is exciting,” said Gonzalez of the doubles pairings. “Definitely going to keep working on [our doubles play], but it’s really exciting to see all of the success.”

The success kept coming on the singles court, where senior captain Lexi Milunovich rapidly took down her opponent in straight sets, 6-0, 6-0. Gonzalez followed up with a victory, but it was freshman Sophia Ho who eventually secured the Crimson triumph, winning against her opponent, 6-2, 6-0.

“Our team is very young, so it’s nice to see everyone stepping up. It obviously bodes well for future years as well,” Gonzalez said.

The captain also noted that, because of the experience gained from the fall matches and the time the team has spent together off the court since the start of the school year, the squad has grown very close, making it much easier to stay focused and keep rattling off victories.

“We’re still taking everything match-by-match, and everyone has certain little things in their game that they’re working on improving,” Gonzalez said.

Next up for the Harvard women is the ECAC tournament in New York City, where they look to continue their hot streak coming in as the number one seed.

The Crimson men (6-0, 0-0 Ivy League) entered Sunday with an abundance of momentum but faced one of their biggest threats yet to their undefeated streak with a home double-header. But even with the extended playing time, Harvard refused to slow down.

Earlier Sunday afternoon, the Crimson men faced off against the Rice University Owls. After dropping doubles in the previous two matches against BYU and Minnesota, Harvard was keen on securing the early point against the Owls. The duo of first-years Henry von der Schulenberg and junior Robert Wrzesinski defeated a Rice duo in a decisive 6-4 win, and first-year Ronan Jachuck and sophomore Brian Shi helped to secure the point on the first court with a 6-2 win.

“We’ve been trying to be more aggressive at the net and take more chances,” said freshman Alan Yim in regards to doubles play. “I think we’ve also been getting more comfortable with our partners. We’ve been rusty on a few skills, but after this week of practice, our work is starting to show on the court. Seeing anyone up on a court, especially after winning the doubles point, is a huge confidence booster and takes a lot of pressure off guys.”

The Harvard men continued their dominance through singles play, sweeping every single matchup en route to a 7-0 win, after Jachucks 6-3, 6-2 win to clinch the match.

“The older guys have been really good mentors to us freshmen. They’ve brought a really high level of energy to practice so that when we go into matches, we’re ready,” Yim said.

Later on in the day, the Crimson faced off against Bryant University. Even with only a modest amount of time between the matches, the Harvard men came out firing.

“We only had an hour break [in between matches], so we just relaxed, had some food, laughed a bit and then went back out on the court to warm-up again,” von der Schulenberg said. “It’s a short break, but it helps to stay focused. Having too long a break can put you off.”

Once again, the Crimson secured the doubles point, this time with a duo of von der Schulenberg and senior captain Logan Weber winning by a score of 6-0, and another pairing of sophomore Steven Sun and sophomore Harris Walker securing the point with a win by a score of 6-2.

Starting off singles play, von der Schulenberg scored the second point for Harvard, finishing with a statement 6-0, 6-1 win, followed by Walker and Jachuck shortly shutting the door on the match with 6-2, 6-0 and 6-2, 6-1 wins, respectively.

“At the start of the season, we wanted to take things match-by-match,” von der Schulenberg said. “But now we’re more motivated and ready to go to Nashville [for the next match] and then the week after we have our ECACs, which has been one of our season goals to win.”

The Crimson look to keep it rolling in the coming weeks, and if the future matches are anything like the past few matches, it is hard to imagine the team slowing down anytime soon.

— Staff writer David Aley can be reached at david.aley@thecrimson.com.