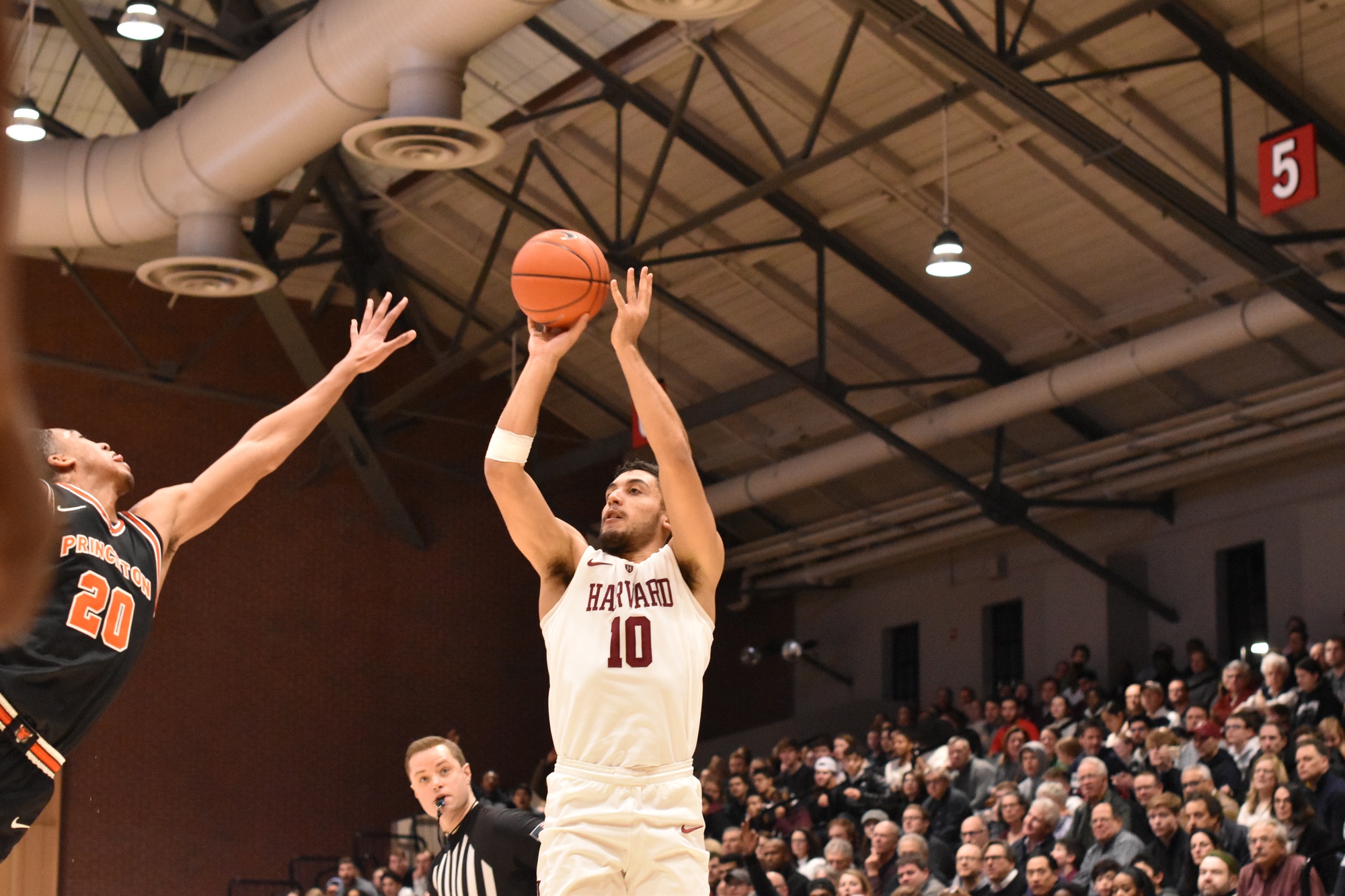 Noah Kirkwood rises for a shot against Princeton. The sophomore guard has become Harvard's go-to scorer in the absence of Bryce Aiken, averaging over 15 points per game in the last nine. By Quinn G. Perini
By Lev Cohen, Crimson Staff Writer

Harvard hosted a pair of high-leverage showdowns last weekend as it welcomed to Cambridge two teams in the hunt for Ivy League tournament bids. The fluid nature of the conference meant that the Crimson, which entered action in a three-team tie for third place, could have finished the weekend anywhere between first and fifth in the Ivies. Harvard did its part, edging Princeton and then Penn in tight games to avenge losses at the home stadiums of the southernmost Ancient Eight schools and improve to 7-3 in league play, two games ahead of the fifth-best Quakers.

Here are some takeaways from a crucial home sweep, which allowed the Crimson (18-7, 7-3 Ivy League) to maintain a perfect home record and brought it closer to securing a top seed in next month’s Ivy Madness:

Tight Throughout: Harvard’s two wins came by a combined five points, but beyond that, there were no huge runs to extend leads or come back from large deficits. The Crimson neither led nor trailed by double-figures all weekend; its largest deficit was nine points, and its biggest lead was eight.

“All of these games have been similar thoughts of how important and desperate the games are for everyone,” said head coach Tommy Amaker after Saturday’s win. “I think that is indicative of the level of play in our league and how tough our league is and how teams are fighting and scratching and clawing their way at this time of the year.”

This was a departure from the games in Philadelphia and Princeton three weeks back, when Harvard lost by a combined four points but had to come back from early deficits of 19 and 16 points — and trailed substantially even late in each — respectively.

But like it had three weeks earlier, the Crimson trailed for most of both games and faced six point deficits at halftime both Friday and Saturday. Easy wins have come few and far between for Harvard in Ivy League play. Of its 17 league wins since the start of last season, just three — and one this year — have come by double-digits, which makes the Crimson’s success in close games under Amaker all the more important.

Free Throw Shooting Woes: A 4-for-13 performance from the stripe on Friday nearly did Harvard in. The Crimson’s leading playmaker, sophomore guard Noah Kirkwood, had an especially difficult weekend from the line. He missed all five of his attempts, including the front end of a one-and-one with eight seconds left Friday that gave the Tigers a final chance to steal a win at Lavietes Pavilion.

Harvard’s struggles from the line are nothing new. The Crimson is shooting just 60 percent from the charity stripe in conference play, 10 percentage points worse than next-worst Cornell. That is down from 73 percent in nonconference play and would rank fourth worst in the country over the full season.

This is perhaps where Harvard most misses senior guard Bryce Aiken, who remains out indefinitely with a sprained foot. Aiken is a career 85 percent free throw shooter, and as the lead ball-handler he was usually the one tasked with putting games away late with pressure free throws.

Without Aiken and with Kirkwood and senior wing Justin Bassey struggling from the line, Amaker can perhaps only be confident when senior guard Christian Juzang heads to the stripe late in tight games. But Juzang has attempted just two free throws in the last five games and 37 on the season, two fewer than Aiken, who has played in 16 fewer games. Getting the ball into his hands more late in games could go a long way to ensuring cleaner conversions of late leads to victories.

Clutch Kirkwood: Free throws aside, Kirkwood was impressive again and looks more and more comfortable as the Crimson’s leading man. When the offense struggles to create open looks, it looks to the sophomore. He went to his patented step-back three — or in some cases, long two — on crucial possessions and was the only player to score for Harvard in the first six minutes against the Quakers.

The Ottawa native is averaging upwards of 15 points per game over the last nine and has consistently shown an ability to hit difficult shots. He is shooting a stellar 53 percent from midrange and 40 percent from beyond the arc in conference play.

“[Kirkwood] has a tendency to hit a lot of really timely buckets for us,” said Bassey. “Whether that’s when the other team’s on a run, and he can silence them with his step-back. He is one of the few guys for our team who can really create his own shot, but also being super unselfish about it. It’s really uplifting.”

Kirkwood’s 4-for-6 performance from beyond the arc this weekend was particularly important given the extent to which the rest of the team struggled on long range efforts. Everyone else combined to shoot 5-for-26, and Harvard’s bench missed all 14 of its three point attempts in the two games, a continuation of a trend started when the Crimson nearly bricked itself to a home loss to Columbia last Saturday, making just eight of its 43 shots from deep. Many of the misses in the last three games have been ugly, and Harvard clearly scaled back its attempts against Penn and Princeton, taking fewer than half as many triples as it had the previous weekend.

That the Crimson could win both games this weekend despite those struggles is evidence of its strengths elsewhere and particularly of its rebounding on both ends and rim protection. But Harvard must find perimeter threats not named Noah Kirkwood if it hopes to improve offensively down the stretch. Its next chance to do so will be this weekend, when the Crimson travels to face Ancient Eight doormats Columbia and Cornell.