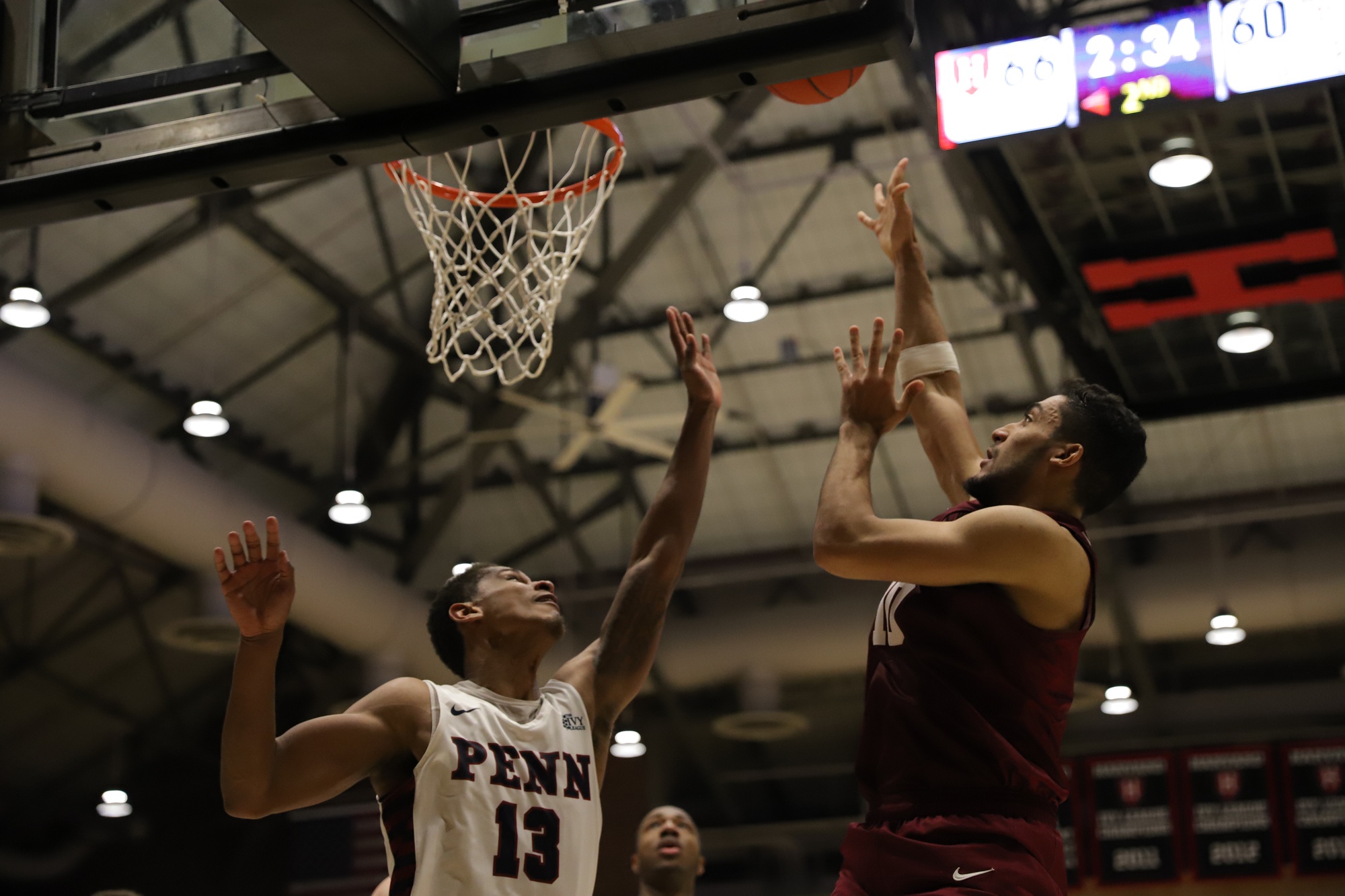 Trailing for much of the first half to a hungry Quakers side, the Harvard men’s basketball team rallied in a second-frame offensive flurry to complete its weekend sweep. Combined with a 2-0 weekend against Columbia and Cornell last weekend, Harvard now sits second at 7-3 in conference play and separates itself from both Penn and Brown in the Ivy standings.

“The theme for us going into this weekend was the little things, little things make big players and lead to big wins,” Amaker said. “...We knew Penn was wounded coming in here [after Friday’s loss to Dartmouth]. I thought our guys were up for the challenge and the big second half was a tremendous effort by our entire team.”

“I think this weekend just meant a lot more to us, regardless if it was home or away,” Kirkwood said. “We really needed these two wins and I think it just made it better that it was home... I think we just have a little bit of extra energy as a team to really show up for our fans and supporters.”

The competition served as a potential preview to the back-and-forth excitement of the postseason tournament — no team lead by more than eight points, while the two rivals jabbed for 11 total lead changes. Collectively, the Quakers shot significantly better from deep (10-of-25 compared to Harvard’s 4-of-18), but the Crimson countered by out-rebounding Penn by 12 boards and elevating its offense in the second frame. Harvard shot 56.7 percent from the field in the final 20 minutes, pulling away to its largest margin of 8 with about four-and-a-half left to play.

Penn’s limited seven-man rotation saw double-digit performances from first-years Jordan Dingle and Max Martz as well as seniors Devon Goodman and AJ Brodeur, but no player in particular found extended success. Dingle knocked down three triples to lead the Quakers’ scoring at halftime, but was subsequently limited to just four points in the second half.

“They shot the ball incredibly well in the first half, and we just kind of mentioned to our guys and we just weren't thinking that they could keep that up with the defensive pressure that we thought we could bring in the second half,” Amaker said.
Much like the first tilt at the Palestra, the Crimson was beleaguered by a sluggish start, converting on just one basket in its first eight field goal attempts. A vibrant Penn crowd led by its traveling band provided an early dose of energy for the Quakers, but Harvard’s offense gradually came to life — both sides saw the lead flip-flop five times in the first 10 minutes of play.

While senior big Chris Lewis could not get anything going against Princeton’s Richmond Aririguzoh on Friday night, the Alpharetta, Ga., native benefited from a less formidable matchup against Penn junior forward Jarrod Simmons, quickly eclipsing his 2-point showing against the Tigers with an and-one finish at the 8-minute mark. Typically manned by Penn’s AJ Brodeur, Quakers coach Steve Donahue elected to match his prized senior on Harvard’s Rob Baker instead.

Lewis would finish the first half with 10 points and largely carried most of the offensive load for the Crimson in the frame.

“I think his mentality, you know, talking with him and just us rallying around him — telling him even though he didn't have a great game on Friday that we're still rocking with him,” Bassey said. “He's still our guy, we are still playing inside out.”

The two sides continued to keep things knotted at 15, 17, and 22 heading into the final four minutes of the frame. But a four-point play from Quakers first-year Jordan Dingle provided to be an important pendulum, propelling Penn to an extended 11-5 run to end the half. Penn shot at an impressive 58 percent rate from the field in that frame — compared to just Harvard’s 33 percent — as it took a 33-27 lead into halftime. The Quakers converted on 7 of its last 9 field goals entering halftime.

Both sides logged buckets at an electrifying pace to begin the second frame. A total of 18 combined points were scored by the first media timeouts as Kirkwood catalyzed the Crimson with two steals and two baskets. Penn reciprocated in due fashion, preserving its 40-38 in the initial five minutes.

But the tide seemed to turn soon after, as Bassey followed up an aggressive drive to the rim with a top-of-the-arc triple to give Harvard its first lead since the six-minute mark of the first half. Kirkwood continued his early half intensity, finishing two more opportunities at the rim.

It took a second push, this time catapulted by a charge on Brodeur from first-year Idan Tretout, for the Harvard lead to be more comfortable. Tretout would blaze by his defender for a lefty layup, followed by a Bassey up-and-under layup off of his own missed three that brought the Lavietes crowd to its feet with a 6-point lead at the 8:18 mark.

“[Idan]'s been playing amazing and practice, and I think that's why a big part of why he's playing so well now,” Kirkwood said. “The coaching staff knows he has been hooping. We really believe in him and I think it goes without saying like when you go into a game without much rhythm and you can still make an impact. It shows his kind of character and it's testament of who he is as a player.”

The Crimson, benefiting off a fourth foul drawn on Goodman, held tight to its six-margin and handed the keys to its regular starters to close the game. Penn cut the lead back to three with one minute left to play, but after a Kirkwood giveaway, Dingle was unable to convert a fast-break three. The Quakers fouled Bassey, and he sank one of two for a 69-65 lead. Penn could not convert in its final possession and the Crimson let out a collective exhale to cap off a 4-0 homestand.

Both Lewis and Kirkwood earned strong praise from Amaker in completing the much-needed weekend sweep.

“I can't say enough about Chris Lewis, especially after a tough night last night, how he bounced back tonight and just had a tremendous game for us. You can see what Kirkwood does for our team we just get a lot of confidence from him, as we did with Bryce in terms of [being] that kind of scoring player. You get confidence from those kinds of guys. So just a tremendous effort by our ballclub and proud of our guys for a great weekend.”