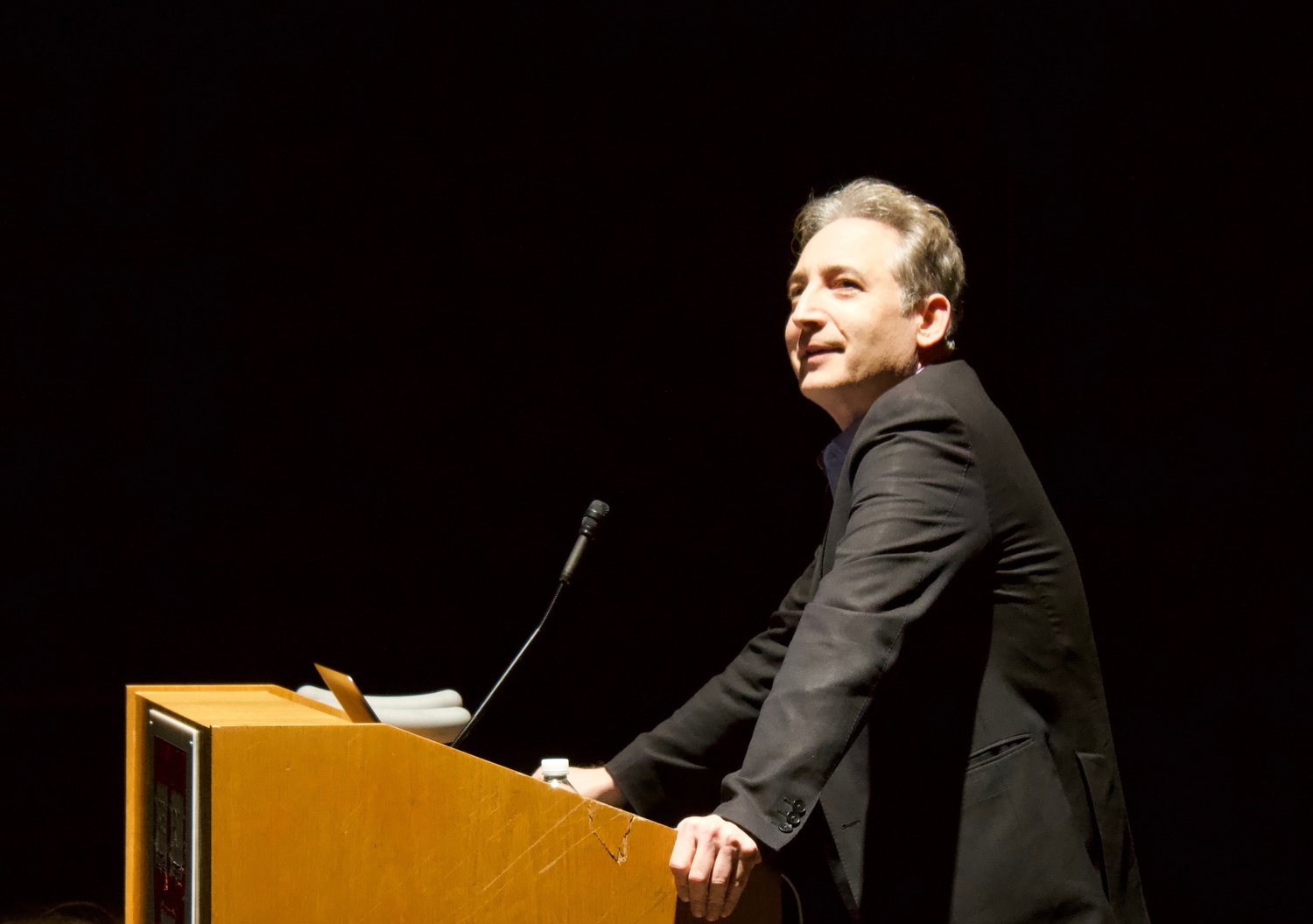 Brian R. Greene '84 describes the history of time at a presentation about his new book — "Until the End of Time" — in the Science Center on Wednesday. By Aiyana G. White
By Natalie L. Kahn and Jing-Jing Shen, Contributing Writers

In his presentation, organized by the Harvard Book Store, Greene gave the audience a preview of his new book "Until the End of Time: Mind, Matter, and Our Search for Meaning in an Evolving Universe." Greene said he hopes his readers can “recognize the wondrous, perhaps frightening to me, exciting fact that we occupy a little minute oasis in the cosmic unfolding.”

Greene began the talk by comparing the history of the universe to a year-long calendar, with the human race only coming into being at 11:40 p.m. on December 31. To describe the future of the cosmos, he used the analogy of the Empire State Building, with each floor representing a duration ten times that of the previous floor.

At the eleventh floor, one hundred billion years from now, the sun will grow over 200 times in size and possibly swallow the earth, according to Greene.

“By floor 38, we believe it’s likely that protons, the very heart of matter, will disintegrate, showing us once and for all that diamonds truly are not forever,” he added to laughter from the audience.

Even if humans still existed on the fiftieth floor, Greene explained, that the very act of thought would emit so much heat that they would effectively combust.

“If you think, you fry,” Greene said.

Greene also suggested that due to the rapid expansion of the universe, galaxies would move so far away that their light would never reach Earth. Astronomers in the distant future, Greene posited, might look into the night sky and see total darkness.

“It started off with the very concrete and went into incredible speculation,” Mayersohn said. “He took us along and we were with him every step of the way."

Greene refuted the possibility of humans having free will; thoughts and actions are simply interactions between elementary particles, which are bound to obey mathematical equations. Yet he said that a deterministic conception of the universe need not preclude hope.

“We are made of these exquisitely ordered, wonderfully choreographed particles of nature governed fully by the physical laws, no free will whatsoever,” Greene said. “And yet even in that environment, our particular arrangements can through a flitting burst of activity, create beauty, illuminate mystery, experience wonder.”

“The fact that particles can do that fills me with a sense of gratitude that really borders on reverence,” Greene added.