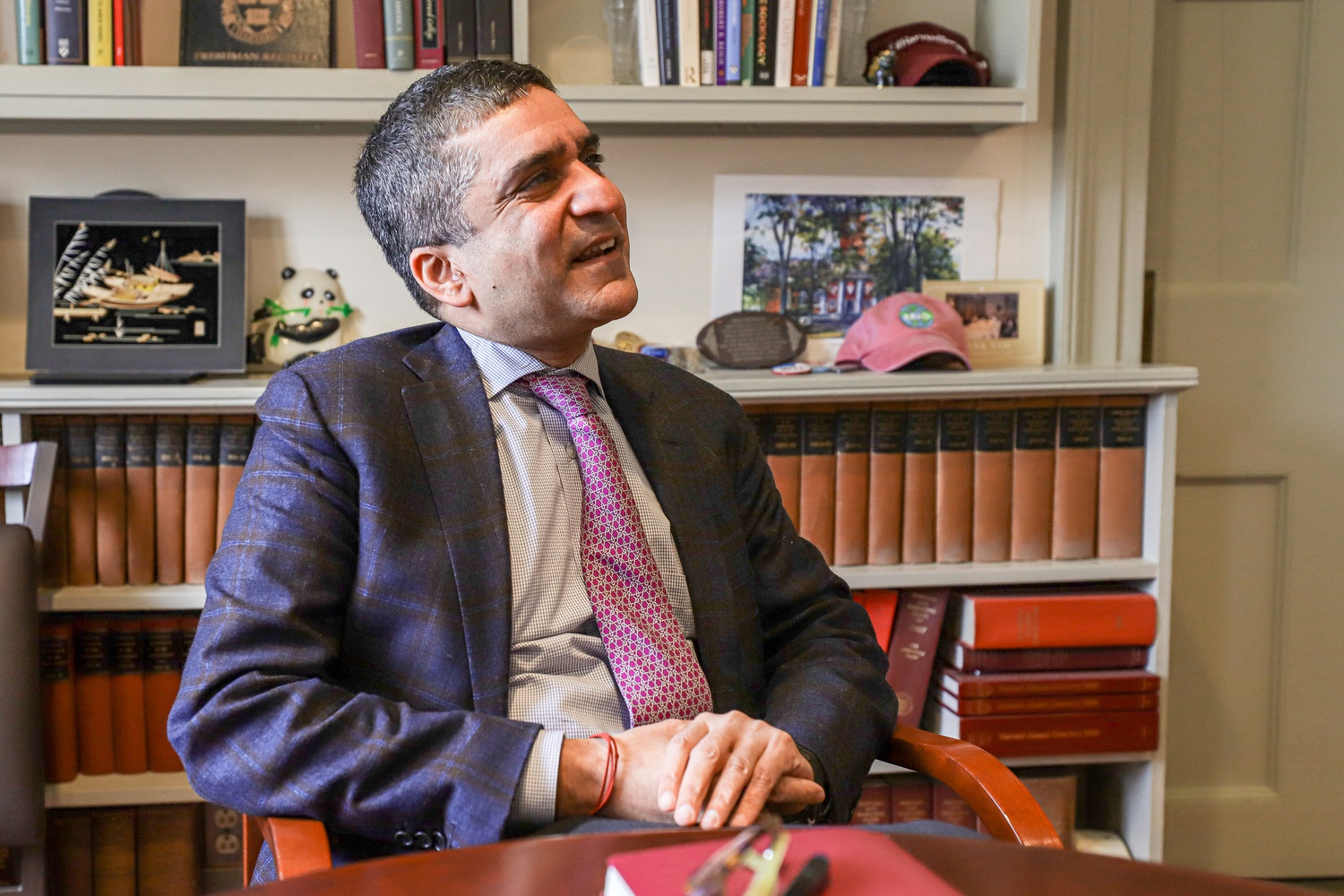 Dean of the College Rakesh Khurana announced in November that he and his wife Stephanie R. Khurana will step down from their role as faculty deans of Cabot House at the end of the school year. By Amanda Y. Su
By Juliet E. Isselbacher and Amanda Y. Su, Crimson Staff Writers

As Harvard College searches for five new pairs of faculty deans in the upperclassmen houses, Dean of the College Rakesh Khurana spoke about the value of having tenured faculty fill those posts in an interview Tuesday.

In recent weeks, Winthrop students have lobbied for the College to keep current interim faculty deans Mark D. Gearan ’78 and Mary Herlihy-Gearan — who have led the House since August — in their roles. Gearan currently serves as the director of the Institute of Politics. Despite those calls, College administrators have repeatedly noted that Gearan and Herlihy-Gearan, who are not tenured, were only appointed for a single year.

Gearan and Herlihy-Gearan’s success in the interim role has caused students to question whether status as a tenured faculty member in the Faculty of Arts and Sciences should be a prerequisite for serving as a permanent faculty dean.

Khurana cited several reasons why the College prefers to appoint tenured faculty members to the position. He specifically mentioned their “unique perspective” in teaching undergraduates and understanding their classroom commitments and academic pressures, as well as their ability to recruit other faculty into the house and bring them in as speakers.

“We think that helps improve and strengthen the kind of integrated vision that we have for both intellectual, social, and personal aspects coming together in the house system,” he said.

“Faculty are able to often — and I can say this for myself as a tenured faculty member — say things without actually fear of or concerns around career prospects,” he said. “And I think that works to the benefit of the students.”

The five searches also come roughly a year after a campus controversy over former Winthrop faculty dean Ronald S. Sullivan, Jr.’s decision to defend Hollywood producer Harvey Weinstein against sexual abuse charges. The College eventually dismissed Sullivan, and he left Weinstein’s team, but many of the questions about the role he formerly filled remained. Aside from calling on Khurana to remove Sullivan, many student protesters demanded the College clarify what faculty deans owe to their house residents.

Khurana said the College has attempted to “demystify” the process of selecting faculty deans this year by clearly defining the role and sustaining high levels of “community engagement,” both by soliciting nominations and gathering student input on candidates.

He added that the College is “fortunate” to boast faculty who are passionate about contributing to and improving undergraduate residential life, as evidenced by “large numbers” of prospective candidates this year.

“I think that because we've made it more transparent about how you become faculty deans, you'd be surprised at how many people are really interested in that and just didn't understand what was the way to even learn more,” Khurana said.

“I’m really grateful for all the outgoing faculty deans,” he added. “They've done a remarkable job because I think part of what's also attractive to folks is to see the kind of communities that they've created.”

After finalizing its shortlists of candidates, the College will form search committees, host meetings where students and tutors can share input regarding possible candidates, and consult University administrators before making a final selection in each of the five houses.

Khurana said he hopes the College can harness these upcoming transitions as opportunities for Harvard to evaluate the futures of its upperclassmen houses and recommit to the values of its house system.

“In many ways, it's actually a moment of renewal,” he said.