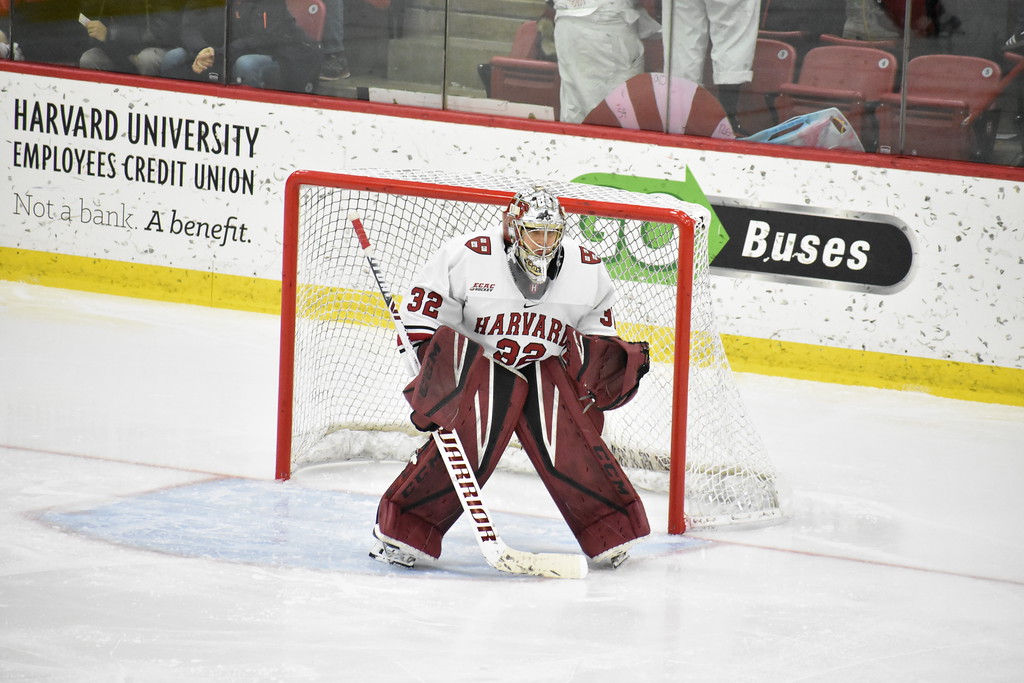 The No. 18 Harvard men’s hockey team found a flair for late-game dramatics on Friday, as it cut down a three-goal deficit against rival Yale.

But the comeback fell short of victory in the end.

The Crimson (11-8-5, 9-4-4 ECAC) battled to a 4-4 stalemate with the Bulldogs (10-12-2, 7-8-2) Friday night at the Bright-Landry Hockey Center. The tie comes at a crucial moment for the Crimson, as the team is in the midst of a final ECAC stretch while striving to keep its national playoff hopes alive.

The Crimson got a boost Friday from its NCAA-best powe play (30.7%).

Harvard’s lone second-period goal came with the man advantage, and the Crimson notched its third tally of the game just after a Yale penalty expired in the third frame.

“It’s really important to just keep momentum in the game,” said Crimson first-year Nick Abruzzese, who had two goals and two assists Friday. “We’ve got the No. 1 power play in the nation right now, so it’s been a big strength of ours.”

The Crimson notched its lone powerplay strike of the game midway through the second period, when Abruzzese converted with Yale junior Brett Jewell in the box for holding. Just 20 seconds before that, though, Harvard coughed up its third shorthanded goal in the last two games.

“Tonight, [the shorthanded goal] was a bouncing puck coming off the glass and we just have to make a more conservative decision,” coach Donato said. “I don’t think we gave up the same kind of opportunities we did last game.”

Midway through the second stanza of the Beanpot consolation game on Monday, which the Crimson lost 7-2 to Boston College, Harvard gave up two man-down goals on the same powerplay, turning a two-goal game into a blowout. But Donato said he is not overly concerned about the shorthanded tallies.

“The Boston College game — there’s not enough time tonight for me to dissect all those issues,” he said. “We really haven’t given up a lot of shorthanded goals against for the season.”

Yale holds a penalty kill efficiency of 75.6 percent — the fifth-worst mark in the country.

The Crimson opted to start senior Cameron Gornet in the crease on Friday over rookie Mitchell Gibson, who has received the nod in eight of Harvard’s last nine affairs.

Gornet (4 GA, .879 SV%) made 29 saves on Friday, including 13 in the first period as the Harvard offense struggled to set up anything in the Bulldogs’ zone.

Last year, Gornet earned the Tim Taylor Cup — a trophy given to the most valuable player in the Harvard-Yale matchup at the Bright — after recording 35 saves in his only career shutout on Feb. 23.

The fourth-year, who started in seven outings as a junior, holds a .907 save percentage and a 2.90 goals against average this season.

Friday’s draw came one month after the Crimson trounced Yale, 7-0, in front of over thousands of fans at Madison Square Garden. The Bulldogs came out with more fervor in the squads’ third bout of the season.

“We knew we were going to see a different team today,” Donato said. “This is a team that’s got a lot of pride, that competes really hard...has some real good players over there, and certainly was looking at tonight as an opportunity to empower their group by coming out and playing really competitive tonight. As much as we talked about it and tried to prepare for it, they were the most competitive team tonight.”

“On our end, we’d like to think that our compete level would be at a high playing against Yale at home,” coach Donato said.