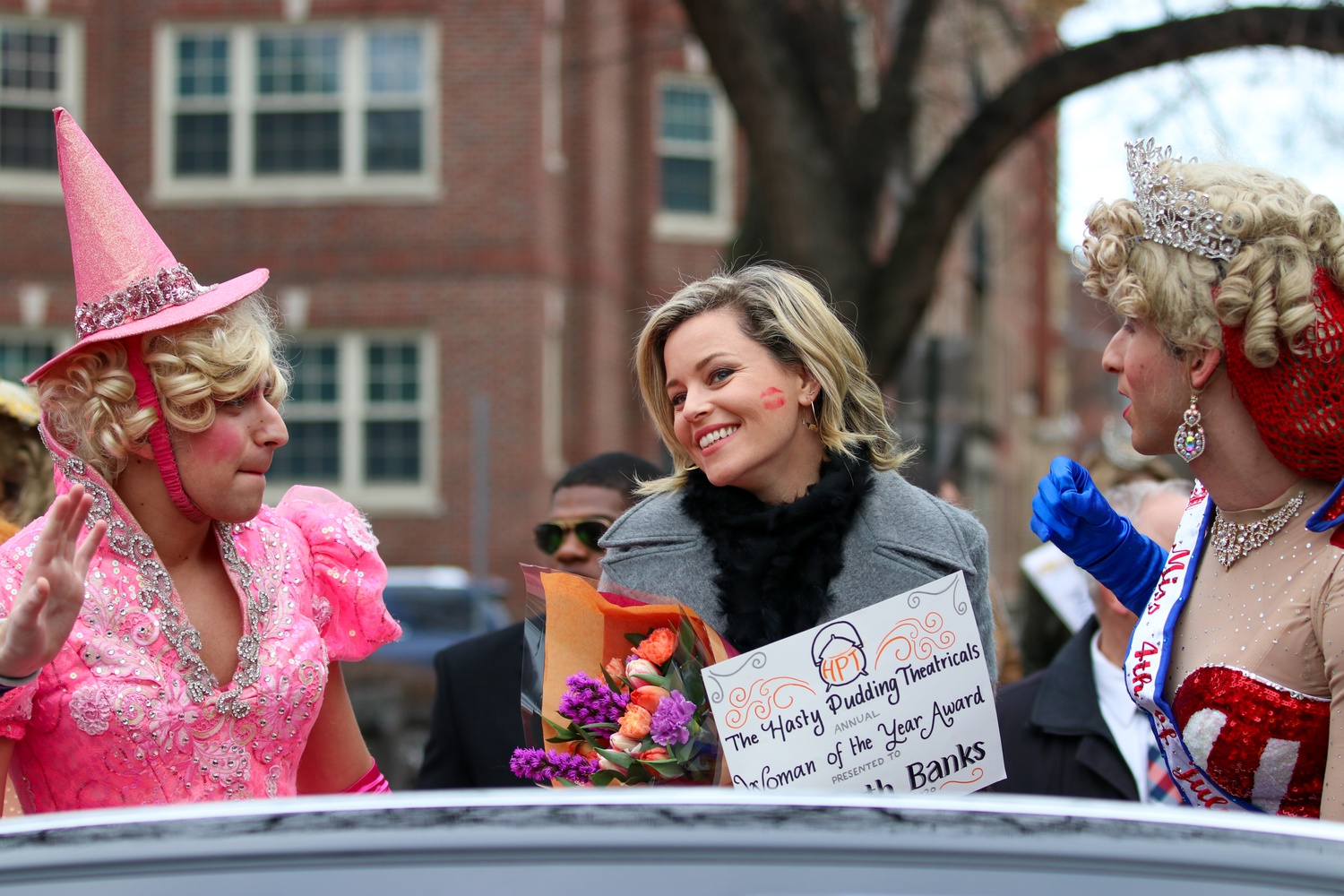 Aided by their traditionally eccentric parade and zany traditions, the Hasty Pudding Theatricals took to the streets on Jan. 31 to honor their 70th Woman of the Year, Elizabeth Banks.

Famous for her acting roles in “The Hunger Games,” “30 Rock,” and “The Lego Movie,” Banks also directed and produced films including “Charlie’s Angels” and “Pitch Perfect 2,” the second of which set a box office record for a first-time director. Banks, who describes herself as a feminist, joined the Hasty Pudding’s second-ever cast to accept female performers, and the first to perform a show co-written by a woman.

After a parade of drummers, musicians, dancers, and Milk Bar brand ambassadors brought her to Farkas Hall, Banks got ready for, she said, “a very unique experience.” To receive her traditional pudding pot, she first had to endure a roast that seared numerous aspects of her career. No stone went unturned — neither the time she was the third woman ever to receive the “coveted” Razzy award for worst director, nor her receipt of an MFA from the American Conservatory Theater.

“It’s fitting, because you are a master of creating art that is fine,” Scott Kall ’20 said. Kall and Eli W. Russell ’20 also quoted Banks’s tweet from several years ago in reference to “Pitch Perfect 2”: “If you’re going to have a flop, make sure your name is on it at least 4x.”

In addition to jokes at the expense of her acting career, Banks also completed a series of tasks inspired by some of her more memorable or embarrassing onscreen moments. Along with extemporaneously rapping Vanilla Ice’s “Ice Ice Baby,” she ate a burger immediately before kissing a lifesize picture of Paul Rudd’s head and took on “Beezel the Cat” (from Banks’ “Movie 43”) in a foam sword duel.

“I haven’t beat anybody up in a while, and it was really fun!” she said.

Following the duel, Banks delivered a monologue from “Romeo and Juliet” that ended in the line, ‘Pitch Perfect 2’ had pretty much the same plot as ‘Pitch Perfect 1.’”

In fact, she delivered a few roasts of her own — jabbing not only at the Hasty Pudding, but at her Harvard audience as well.

“The Hasty Pudding is just one of those truly progressive organizations,” she said. “It’s like you were founded and then, a mere 175 years later, let ladies into the party.”

When asked about the University of Pennsylvania, her alma mater, Banks eagerly answered that she would never wear a Harvard sweatshirt.

“Penn is a much better institution,” she said. “If Ivies were Kardashians, we’re Khloe — we’re bigger and more fun, and we’re easier to get into.”

“Whenever I get to take a stage I try to do my best to somehow roast my husband,” she said. “We’ve been together for a long time — it’s our 28th year — and I looked out while I was being roasted and he was having the best time.”

“We were just working on a television show for FX called ‘Mrs. America,’ with one of the finest casts that I’ve ever been a part of — Cate Blanchett, Sarah Paulson, Uzo Aduba, Margo Martindale. I think every single person [in the cast] is the greatest, and I’ve just been having the best time,” Banks said.

Finally, she answered a question on co-owning her production company, Brownstone Productions, with her husband Max Handelman.

“It’s fun to go to work together everyday, and we get to travel as a family, which is really important,” Banks said. “I think especially for women working in Hollywood, it’s important to build your support system so that you can do as much as you want to, and I have a great support system in my husband and in the employees at my company.”

—Staff Writer Joy C. Ashford can be reached at joy.ashford@thecrimson.com.