The Escapist Tragedy of ‘Calvin and Hobbes’ 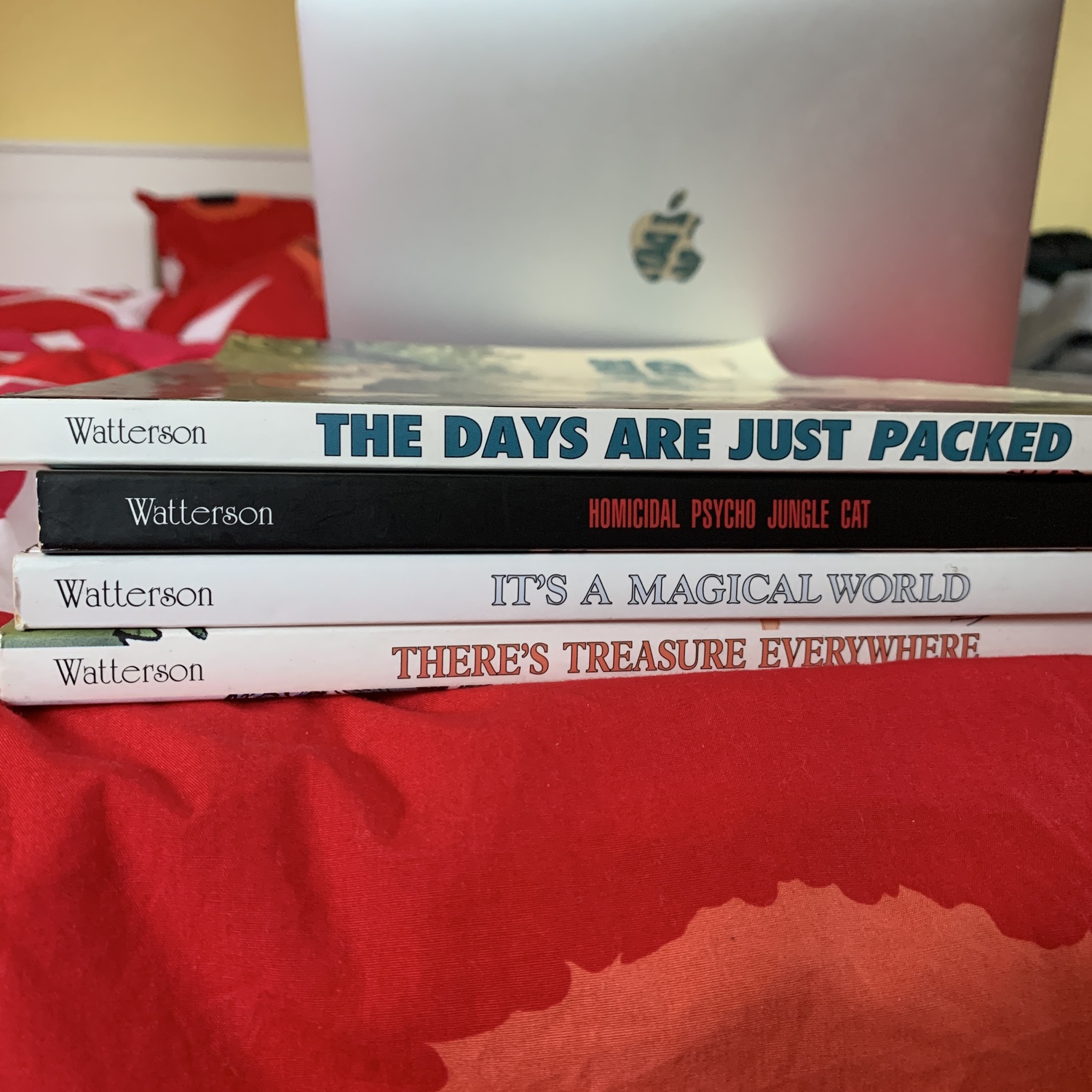 Not many can claim to have been born six years old. Calvin, of “Calvin and Hobbes,” proves the exception to that rule. Bill Watterson drew the first of the now-iconic comics in November of 1985, and the last in 1995. Now, 35 years later, Calvin is no older, and “Calvin and Hobbes” remains the complex, philosophical examination of childhood it has always been. The eponymous Calvin and Hobbes, named respectively for John Calvin and Thomas Hobbes, occupy their time with sledding, torturing their babysitter Rosalyn, and engaging in the wild bouts of imagination which define the comic.

Less a running gag and more a part of the underlying structure of “Calvin and Hobbes” is the question of Hobbes’s realness. One frame Calvin is clutching a tiny tiger plush, and the next he’s on the shoulders of a standing tiger twice his height. Every few comics they are busy transmogrifying each other into pterodactyls and aliens. Watterson paints it all in an exquisite reality, depicting the world exactly as Calvin imagines it. Occasionally, especially in the classroom, his reality is a cynical one. But there are just as many instances of wonder.

One of Watterson’s favoured tricks is to depict Calvin and Hobbes in the midst of a deeply philosophical conversation, ruminating on how to best find meaning in their lives, and have the last frame “cut away” to reveal them spending their precious time watching television. But that is not always the case. One of the most distinctive parts of the comic is its portrayal of the great outdoors. “Calvin and Hobbes” was inspired by the suburban world of the American Midwest, specifically the forests of Ohio, and it is that Midwestern forest where Calvin and Hobbes seem to find conclusions in their grand search for the meaning of life. One of the most touchingly wondrous comics, the last Watterson ever drew, shows the first snow day of the New Year. Hopping onto his sled, Calvin declares, “It’s a magical world, Hobbes, ol’ buddy… Let’s go exploring!” And off they whizz into the endless white.

Equally terrifying as the impending loss of childhood is the decline of the natural world. In that sense “Calvin and Hobbes” is a manifesto on climate change. Hobbes lists all the reasons for fear: “Our oceans are filled with garbage, we’ve created a hole in the ozone that’s frying the planet, nuclear waste is piling up without any safe way to get rid of it…” Where does it leave us in our search for meaning, asks Watterson, if we have no more nature to find it in?

“Calvin and Hobbes” remains an icon for the very thing which brought it to fame –– its willingness to accept the impossible, to embrace the irrationality of the moment. Other things are less central but still essential –– Calvin’s perpetually exhausted parents, his emphatic boredom in the tiresome classroom, his relentless imagination, his deep philosophical ponderings when set free with Hobbes to roam the forest in his iconic red wagon.

One famous full-page frame includes a still image of a little yellow path, weaving through a meadow surrounded by forest. There are three iterations of Calvin and Hobbes zooming along in their wagon. In the first and leftmost, Hobbes says, “Well, summer is almost over. It sure went quick, didn’t it?” Calvin responds with characteristic unconcern: “Yep.” A moment of silence is a hard thing to achieve in one comic frame –– here, Watterson executes it with remarkable simplicity. The little wagon flies through the center of the strip, elevated as always slightly above the ground. The last image of Calvin and Hobbes is a tiny one, just a blurred shock of yellow hair and the rainbow’s-arc of Hobbes’s tail as they crest a hill. In the moment before they disappear down the other side, Calvin remarks, “There’s never enough time to do all the nothing you want.”

It is a melancholy thought. Even for someone eternally six years old, the idea of growing up is a difficult one to come to terms with. In the midst of immense global uncertainty, “Calvin and Hobbes” remains terrifying –– and strangely reassuring.