‘Dragon Mama’ is a One-Woman Feat 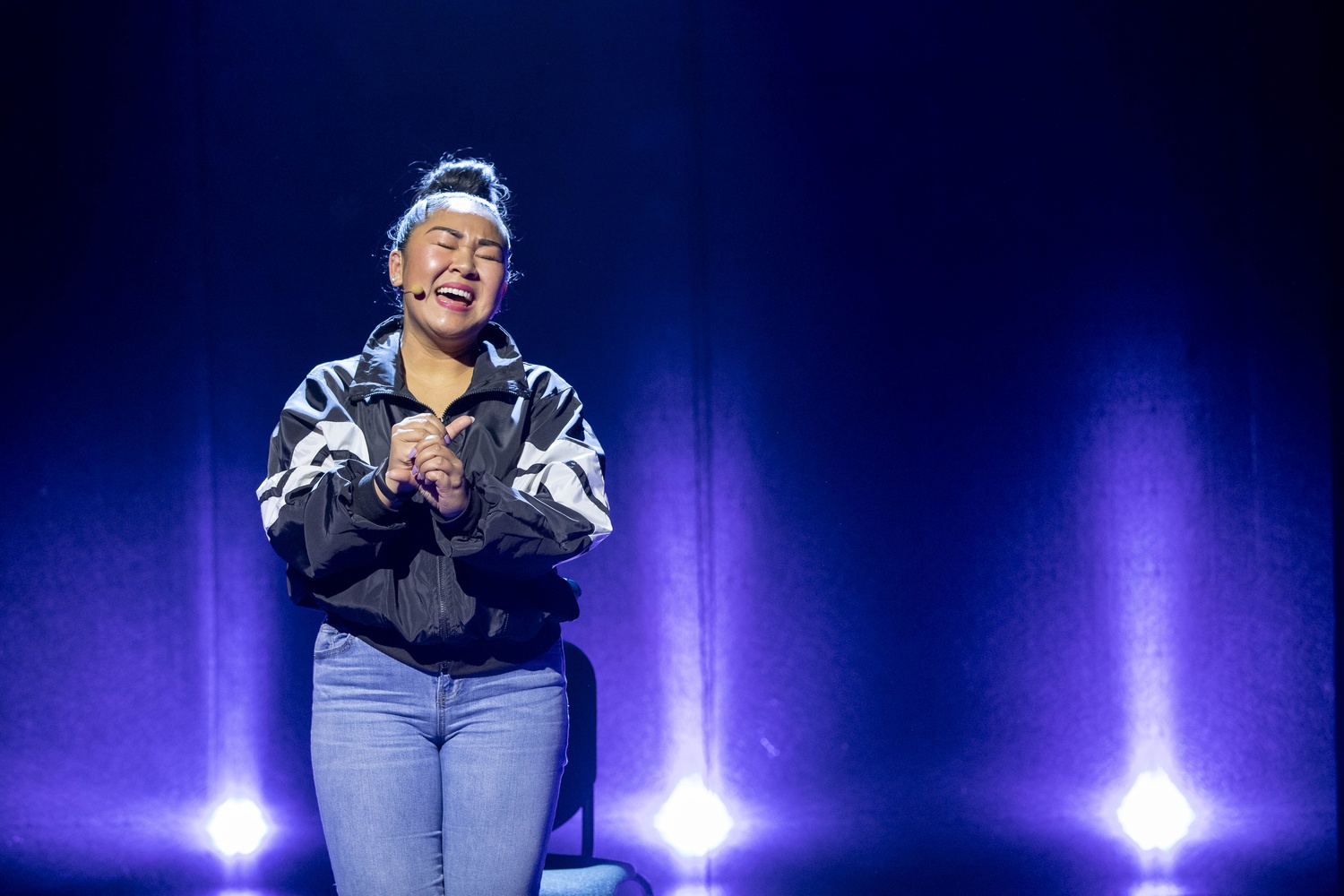 A soft plucky guitar fills the speakers. After a moment, it’s replaced by a rush of wind, accompanied by birdsong. “Thanks for choosing to be here,” proclaims the screen. “Hold onto your butts.”

“Dragon Mama” opens on a set right out of Peter Brook’s wet dreams. On screen is a small square stage, lit around the edge by a string of white lights, and an armless chair. Get used to this barebones mise-en-scène and the woman standing on the chair, because that’s all you’re going to see for the next hour and 48 minutes of this new recording from the American Repertory Theater (ART).

That woman is Sara Porkalob, the creator and lead actress of this one-woman show. At the moment she is playing the youngest version of her mother, Maria Porkalob Jr., climbing a mango tree in search of the “juiciest ones.” Over the course of the show she transforms into nearly every Porkalob, from her grandmother, Maria Sr., to all four of her aunts and uncles at different ages, and finally to herself. Side characters are included by the dozen. Porkalob swings between them effortlessly, voice modulating and posture shifting to accommodate each new arrival.

One-woman shows are notoriously difficult to pull off effectively, especially in longform theater. From the beginning, Porkalob establishes a few simple rules: character-switching is accompanied by a slight turn of the body, scene-switching by a change of the lights, and any new character is an older version of Maria Jr. unless proven otherwise. There are no props — not even Maria Jr.’s signature Walkman. Porkalob allows herself only one break in character, which is to tell the audience about a moment in her family’s story that she “couldn’t quite figure out how to do in the rehearsal room.” Rather than wrench the viewer from the narrative, this beat serves instead as a reminder of Porkalob’s proximity to the events and of the essential and intimate truth of her portrayal.

Among the most persuasive moments are those that combine misfortune with hilarity. It is a peculiar combination, but it’s also one at which Porkalob excels. When a trailer park neighbor bullies the “baby of the family” Lily, her older sister Maria Jr. comes to the rescue, putting him in a headlock and letting Lily take her revenge in one of their more stomach-turning schemes. The soundtrack to the scene of Porkalob’s own birth is an a cappella rendition of Salt-N-Pepa’s “Push It,” with Maria Jr. yowling out the lyrics as a nurse tells her encouragingly to “push it… da da na-na-na.” Though her subject matter is serious, it never slips into tragedy, nor self-pity. Much of the power of “Dragon Mama” is Porkalob’s absolute certainty in the audience’s ability to empathize with her family.

With their mother often absent on unexplained trips to “Seaworld,” most scenes see her self-sufficient children conversing among themselves. The sunny, round-faced Porkalob plops easily into childhood, her voice pitching up to a squeaky burbling lisp. With cheerful naïveté she delivers lines like: “Sticks and stones might break my bones but you’re gonna die with no one to love you.” And though she differentiates cleverly between the various Porkalob children –– Lily has a pronounced lisp, Junior seems constantly to have a cold –– at times they can muddle together.

But the real pitfalls come near the end, when the average viewer is tiring from both the unavoidable monotony of the one-woman format and the brutally sincere subject matter. After Maria Jr.’s move to Alaska, which remains fairly perplexing up until the very end of the show, she meets the karaoke connoisseur Tina at an Anchorage gay club. Tina and Maria Jr.’s relationship edges dangerously close to a mentor-mentee dynamic, and is at best one-sided, making it difficult to hold out hope for them staying together. The last 20 minutes drag on in a way the rest does not, as Porkalob leans too heavily on an overripe timbre for comic relief. But overwhelmingly her performance is clever, genuine, and charming.

“Dragon Mama,” streaming on the ART website through Dec. 10, is the second installment of Porkalob’s three-play “Dragon Cycle.” The first, “Dragon Lady,” opened at the OBERON in 2018, and told the story of Maria Porkalob Sr.’s gangster past; the last, “Dragon Baby,” will follow Porkalob herself if the generational pattern holds, and will premiere at the ART at some point in the future. If it is anything like “Dragon Mama,” it will be a show worth looking out for.