The Trump Administration Worked to Limit the Entry of Foreign Students. How Did It Impact Higher Education? 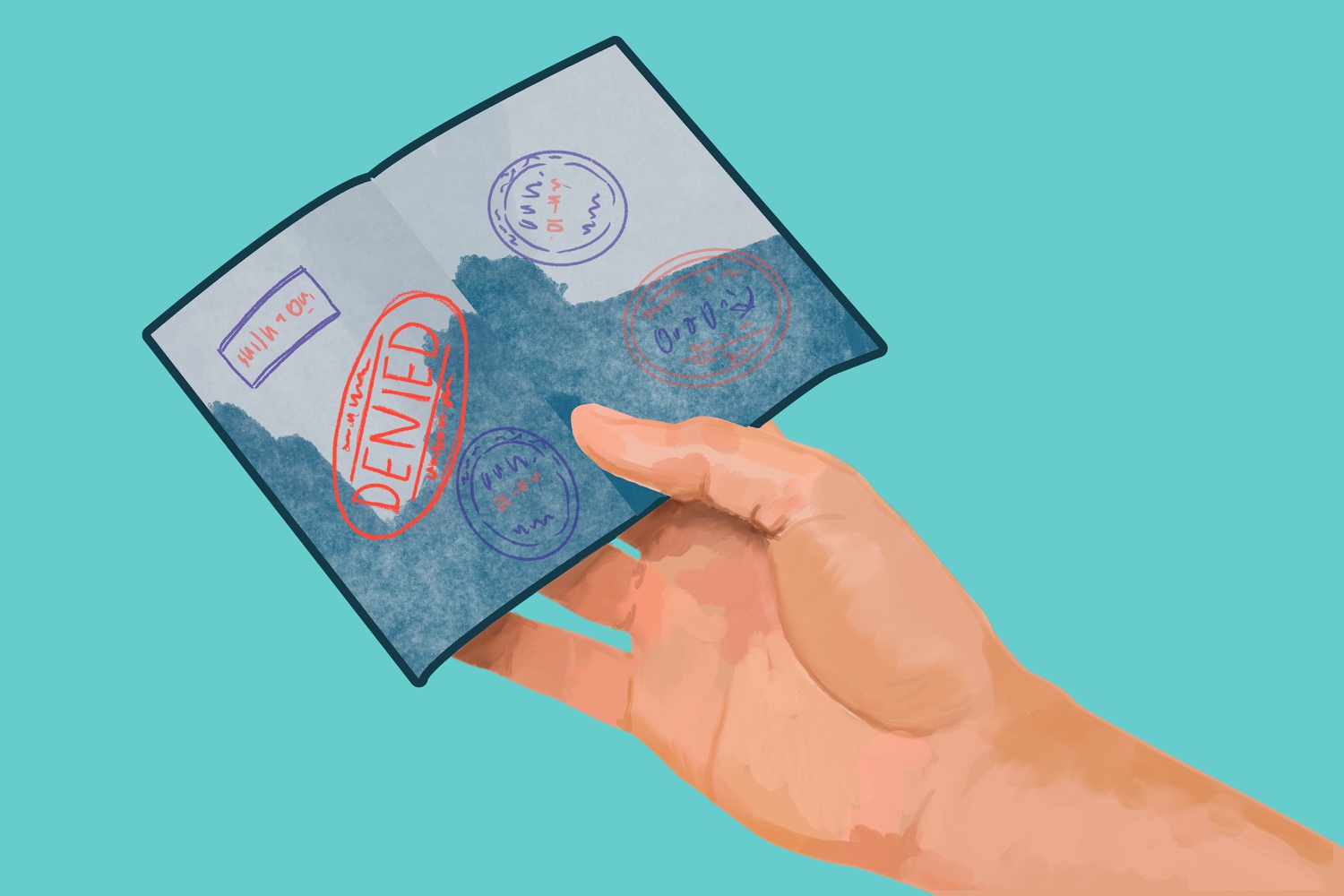 Trump administration policies have taken a toll on some of Harvard's international students. By Madison A. Shirazi
By Kevin A. Simauchi, Crimson Staff Writer

Determined to leave their mark, President Donald J. Trump and his allies have pursued a bold policy agenda that has limited immigration to the United States.

With a litany of immigration-related administrative policy reviews, rule changes, and contentious court battles coming out of the White House, many Harvard affiliates and immigration advocates have expressed concern that the outgoing president has harmed American higher education.

Harvard administrators have been front and center in expressing those sentiments. University President Lawrence S. Bacow and Vice Provost for International Affairs Mark C. Elliott have reiterated in interviews and statements that Trump’s policy pursuits would have severe consequences for Harvard and, more broadly, American higher education.

Bacow lobbied lawmakers and sent letters to several Trump administration officials pleading with them to commit to installing visa protections for international students.

In an Oct. 16 interview with The Crimson, Elliott criticized Trump’s efforts, saying that Harvard and all of American higher education “has suffered.”

Efforts to limit entry from certain countries, restrictions to make it harder to obtain work permits, and proposed rules that would threaten visa-holders’ legal status have worried and, ultimately, interrupted many international students’ experiences on campus.

The White House Press Office did not respond to multiple requests for comment.

During the first two months of the COVID-19 pandemic, the Trump administration began a concerted effort to tighten provisions for international students seeking employment, setting its sights on the Optional Practical Training provision of F-1 visas.

OPT allows international students who receive a STEM degree to apply to stay in the U.S. for up to three years post-graduation, and is considered by some to be a common pathway to obtaining an H1-B work visa.

The program is widely popular — U.S. Citizenship and Immigration Services reported a record 223,284 applications approved for Employment Authorization Documents under OPT in 2019.

Chris Chmielenski, deputy director at immigration reduction nonprofit NumbersUSA, lambasted OPT in an interview, arguing that the extension program “circumvents the will of Congress.” These arguments have found their way to the Trump administration. Officials considered severely limiting OPT, but ultimately decided not to pursue these changes, according to Politico.

Chmielenski said he hoped the Trump White House would work to implement OPT restrictions, arguing that the program goes beyond the legal definition of F-1 student visas.

“The law is pretty clearly written when it comes to F-1 visas,” Chmielenski said. “And the law that was passed by Congress says that F-1 is to be used for the purpose of international students coming to the United States for the sole purpose of studying in the United States.”

Bacow, in a June letter to the U.S. Department of State and Homeland Security, expressed concern over what the University and other institutions would stand to lose had OPT been limited.

“The loss of OPT threatens to erode our ability to enroll the best and brightest,” Bacow wrote.

Bacow urged government officials to avoid taking steps to adopt stricter immigration policies, adding that it could cut universities off from a global community of science and research.

“Not only do these policies threaten to undermine our national ideals and core institutional values of openness and inclusivity,” Bacow wrote. “They threaten to cut off the United States from the global scientific community in critical fields of science and scholarship."

In his first week in office, Trump issued Executive Order 13769. This travel ban went through three iterations, originally barring the entry of people from seven Muslim-majority countries to the U.S. for 90 days.

The ban has taken a toll on some Harvard students, who say it has separated them from their families and led to frustration and even isolation.

“I feel professionally and emotionally exhausted more than ever in my life,” Electrical Engineering postdoctoral fellow Shahab Asoodeh, who is from Iran, wrote in a message to The Crimson.

When Trump signed the first iteration of his executive order, Asoodeh was a Ph.D. student in Canada planning to come to the U.S. as a postdoctoral fellow at both Harvard and MIT. But soon after the ban came into effect, he received a notice from immigration officials that they had suspended his visa application. His colleagues at Harvard later rescinded his offer since the project was time sensitive.

Reluctant to stay in Canada after finishing his doctoral studies, Asoodeh came into contact with faculty members at the University of Chicago, who offered him employment. Officials there later sent Asoodeh’s information to the office of Sen. Richard J. Durbin (D-Ill.).

“His office contacted me several times, and ostensibly helped me get my visa from [the] US Embassy in Ottawa,” Asoodeh wrote.

Durbin’s office did not respond to a request for comment on Asoodeh’s case.

While in the U.S., Asoodeh kept in touch with his colleagues at Harvard and was able to transfer to the School of Engineering and Applied Sciences as a postdoctoral fellow in 2019.

Life in the U.S. has not been any easier for Asoodeh. Given his visa status, he has not been able to leave the country over fears that he would not be allowed to return. Since his arrival in 2017, he has not attended international conferences and research workshops that he said are critical to meeting his postdoctoral obligations.

“This has been detrimental for my current faculty job search as I didn’t give any talks or lectures in international conferences,” Asoodeh wrote.

Ralph Estanboulieh ’21, originally from Aleppo, Syria, was preparing to study in the U.S. in the months leading up to the 2016 election. Once Trump won the presidency, and Estanboulieh gained admission to Harvard, he said that he anticipated some difficulties obtaining his student visa.

In March 2017, Trump implemented a second version, which was preemptively struck down by a federal court in Hawaii. Estanboulieh’s ability to obtain entry to the country and join his first-year peers hung in the balance of that court's decision.

“I was very lucky I was able to slide into a flight right between, I think, the second and the third versions,” Estanboulieh said.

Between March and July of 2017, the Trump administration took the order all the way to the Supreme Court, which upheld provisions that prohibited entry to refugees with no ties to the U.S.

Estanboulieh was spared, but he has not been able to see his family in Syria for more than three years.

“Of course, being far away from home here is — it can be painful sometimes like, of course, you can imagine homesickness,” Estanboulieh said. “I don’t want to say ‘get used to it’ because you don’t really get used to it, but you get used to how it feels.”

With Joseph R. Biden’s election, Estanboulieh is only now entertaining the possibility of a trip back home.

“I mean, one of his promises was on day one, he would remove the travel ban,” Estanboulieh said. “And so, as long as he keeps his promise, I think that should be good, and then once he does, then we can start thinking about potentially visiting home.”

What Can Biden Do?

With mounted expectations, President-elect Biden faces a series of challenges. The Trump administration is rushing to finalize immigration rule changes that would make it harder for Biden to ease travel and visa restrictions.

Immigration and Customs Enforcement released a “Notice of Proposed Rulemaking” on Sept. 25 that would reduce the amount of time international students can spend inside the country. The ruling has not yet gone into effect, since the federal government is required to read and respond to all comments before processing the proposal for a final review.

The notice has received 32,083 comments, which could take months to respond to. But if the rule were to be approved and sent to Congress, it would be harder for the Biden administration to overturn it, according to Danilo A. Zak, a policy and advocacy associate with the National Immigration Forum. The process of overturning a final rule would involve months of administrative review.

It remains unclear how the incoming Biden administration will pursue protections for international students.

In July, Biden tweeted that international students should not face any significant barriers to studying in the country.

“Across the world, people come to this country with unrelenting optimism and determination toward the future. They study here, innovate here, they make America who we are,” he wrote.

Ned Price, a spokesperson for Biden’s transition team, declined to comment on their plans for reversing President Trump’s visa restrictions, instead referring to Biden’s campaign website.

On the website, the Biden campaign wrote that his administration would work to increase the number of employment-based visas and liberalize restrictions for Ph.D. graduates coming from any science, technology, engineering, or mathematics background, while also temporarily reducing the number of visas during times of high U.S. unemployment.

Regardless of Biden’s policy priorities, Trump’s actions, combined with the onslaught of the pandemic, appears to have contributed to a declining number of international students enrolling in American universities.

The Institute for International Education, an organization that advocates for foreign student enrollment in the U.S., published a report showing that new registrations among international students have declined for the past four years.

From 2017 to 2018, 271,738 new international students enrolled in American universities. This number was markedly lower than in years prior, dropping 6.6 percent from the preceding year — the greatest decrease in six years.

Katie Moon, a spokesperson for the Institute for International Education, declined to comment.

The declining number of new international student enrollments concerns immigration advocacy groups. Zak, the National Immigration Forum associate, said the trend is worrying since students from abroad are now turning to other countries to pursue their studies.

Zak pointed out that growth rates of international student enrollment in countries like Canada, the United Kingdom, and Germany have remained markedly higher than in the U.S., citing the countries’ less stringent visa policies.

David A. Hopkins, a political science professor at Boston College, offered a similar observation. Hopkins speculated that Trump’s immigration agenda has likely shaped public opinion towards the U.S. for years to come.

“The fact that Trump got elected and did what he did is now a matter of historical fact,” Hopkins said. “And that has the effect of possibly changing public opinion in the rest of the world and changing the decisions made by students and scholars considering coming to the U.S. to study or pursue their academic career.”

“There’s a residue of distrust or fear or acrimony that may endure even with a Biden presidency and even with Trump defeated.”