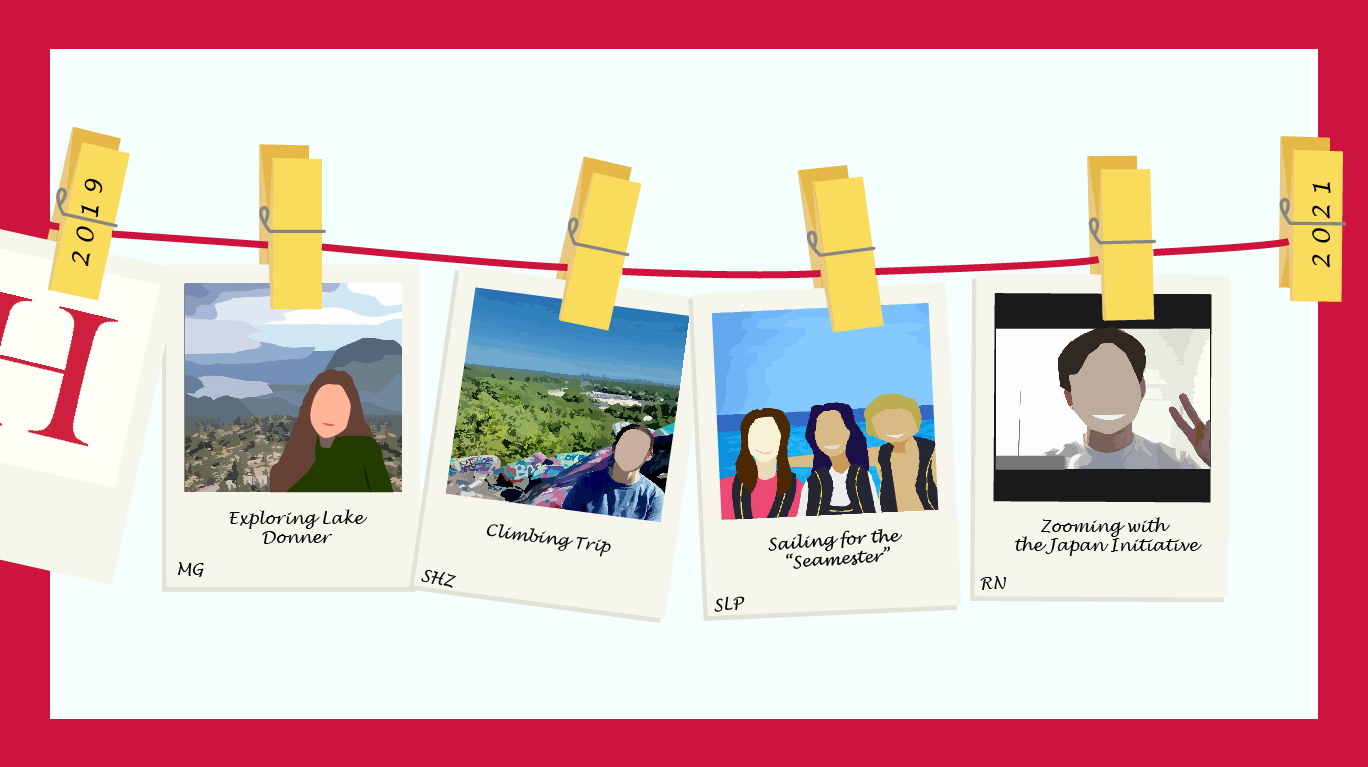 Students reflected on their decision to take a gap year rather than enroll in virtual school. By Tran Nguyen
By Brandon L. Kingdollar, Crimson Staff Writer

Ever since she received her acceptance letter, Samantha G. Marks ’25 dreamed of her time on campus. As senior year of high school waned, she motivated herself by imagining the intellectual wonderland she would soon access: top-tier research labs, extraordinary peers, and tight-knit communities around her favorite activities.

Her initial stance on taking a gap year? “Absolutely no way,” Marks said.

During the following months, however, COVID-19 surged across the United States and the world. On March 10, 2020, Harvard ordered all residential students to vacate campus and continue the semester virtually.

Still, Marks held out hope that Harvard would be able to provide the traditional campus experience in the fall. She waited to make her decision until the “heartbreaking” announcement on July 6 that all courses would be taught remotely. Marks would be unable to conduct lab research as she had hoped, or participate in clubs as she had imagined.

“I knew it wouldn’t be the same,” Marks said.

Like 340 first-year students — representing over 20 percent of those admitted — Marks ultimately deferred enrollment until fall 2021. Over a thousand other students also elected to take leaves of absence.

The Crimson spoke to nine students who chose not to enroll for the fall semester, representing members of each of Harvard’s four classes. Challenged to create a meaningful gap year experience despite the pandemic, they pursued professional opportunities, explored the world around them, and focused on personal growth.

When Jessica L. Eng ’21-’22 learned that classes would be virtual, the choice to take time off was clear. Although she had enjoyed her online classes, she craved the freedom provided by unstructured time. She had interned for the Washington Post during the summer, and the option to continue into the fall proved too enticing to ignore.

Eng eventually decided to intern with National Public Radio instead — an opportunity she would otherwise have been unable to pursue.

“I wanted to work on the election,” Eng said. “Being able to be directly embedded in a team working on election graphics and all that cool stuff — that only comes around [every] four years.”

Eng decided to move from her hometown of San Francisco to Washington, D.C. for the fall semester. However, she still felt a connection to home, particularly when writing about the same wildfires that filled her summer skies with smoke.

“I was looking through data and helping write a story about the California wildfires, which actually impacted my family, even though I was writing it in Washington, D.C.,” Eng said. “Actually reporting on things that were super personal to me felt a little bit weird, but also rewarding, because I was able to report these stories and share them with my family.”

Others students, such as Shira Z. Hoffer ’25, pursued opportunities in social activism. She interned part-time for Massachusetts State Senator Jamie B. Eldridge, going on to work with the Anti-Defamation League and the American Civil Liberties Union of New Hampshire.

“I think working with the ACLU has definitely been the most impactful,” Hoffer said. “Instead of having, you know, administrative work that I may have expected as an intern, I've actually been reaching out to recently freed people from county jails and talking with them about their experiences.”

In some cases, students helped their communities by working on the front lines.

Jessica P. Miller ’21-’22 relished the opportunity to work full-time as an emergency medical technician rather than attend virtual classes.

An aspiring doctor, Miller gained insight into the dilemma healthcare professionals face when trying to balance community needs with their families' health during the pandemic. She expressed concern about exposing her grandmother to COVID-19, even while following all health precautions.

“It just comes with the job if anything major like a pandemic pops up,” Miller said. “I think that's something that healthcare workers have struggled with lately, because it's like, oh, I didn't sign up for this whenever I decided to become a nurse or something like that. But like, yeah, you kind of did.”

Nevertheless, Miller and Hoffer both said they remained happy about their decision to spend time off in service to others.

“I've met really cool people,” Hoffer said, “And I've had these really neat opportunities that have been meaningful both in and of themselves, and also, hopefully will lead me to future opportunities in the same kind of fields and possibly beyond.”

She had heard from her high school scuba-diving and sailing instructor of a gap year experience called Seamester, which involves spending a period of up to three months at sea.

“My thought process was that, I've been just going continuously in high school, pushing myself really hard in school and keeping my head down, not really doing anything super adventurous or out of the box,” Packman said. “And since COVID struck, I’ve basically just been at home all summer, and it just seemed like it's now or never, right?”

Some of Packman’s favorite experiences have been at port cities around the Atlantic. She highlighted scuba diving in the Caribbean — an experience she said “spoiled” her — and rappelling down huge seaside cliffs.

“I've definitely discovered that a sit-down desk job is not the only path in life,” Packman said. “My eyes have been opened to the different kinds of lifestyles that people can lead and still be super happy and fulfilled.”

Some students didn’t have to go far for adventure. For example, Miller described kayaking, riding four-wheelers, and hiking mountain and forest trails in the wilderness in her home state of West Virginia.

A number of students also expressed a desire to go on more traditional gap year adventures during the spring semester, when they believe the threat of coronavirus will be less severe.

Not content to spend his gap year at home, Ryan D. Nguyen ’25 began organizing a road trip across the lower 48 states with two friends who are also on gap years. The trip is set to begin in March.

Other students plan to travel abroad for the spring. Hannah R. Frazer ’25 said she’ll join a programin Tel Aviv, Israel for six months, where she will learn Hebrew and Israeli history, as well as taking field trips to Jerusalem and other areas.

“I don't really know that much about my religion, history, and culture, and so I'm very excited to go there and learn a lot more about it,” Frazer said. “I'm hoping that I'm going to be able to use all of my energy in Israel doing a lot more exploration and stuff like that.”

When Michal Goldstein ’25 decided to take a gap year, she never intended to take a break. She had originally planned to work a full-time job during the fall, but ultimately was unable to do so due to her family’s health concerns.

In hindsight, Goldstein said she was grateful for the opportunity to take a breath and use her unstructured time for introspection.

“You learn so much more about yourself when you're not doing other things,” Goldstein said. “I have all this time to read books and write and stuff and do all that introspective thinking for fun, and not because I'm doing it for a class or grade.”

One self-discovery that Goldstein made, she said, was her ability to embrace the unknown. For example, she said she’s not concerned about lacking plans for 2021 — as opposed to high school, where she said she always knew what she had planned for a given year.

“If you had told me that my thinking would have been like that a year ago, I would have thought you were crazy,” Goldstein said. “The truth is that you actually never know what's happening in the future, and that's just something we tell ourselves, and COVID has just made that really apparent.”

“I really feel like I won't ever have a time like this again where I have the mental space to think and philosophize, if you will, and read and dive into these topics that are honestly really, I guess, you could say academic in a lot of ways,” Taylor said.

In particular, Taylor said she came to a number of realizations regarding race and systems of privilege around her, as well as her responsibility to speak out against them rather than allowing others to feel marginalized.

“I feel like a lot of the issues that I'm interested in [that] I'm kind of trying to understand better are not actually that hard to grasp, conceptually, but they're really difficult to come to terms with emotionally,” Taylor said. “As a white person, I still had to go through the kind of emotional realization of just how much I was directly benefiting from a racist system.”

Other students pursued self-improvement by learning new languages and picking up new hobbies, such as playing the guitar. For example, Eng honed her cooking skills, exploring ancient Egyptian and traditional Chinese dishes and creating a cookbook with modern interpretations of these recipes.

Still, some students found their gap year experience intellectually unsatisfiying. To that end, Marks, who had long wanted to learn additional programming languages, decided to do something counterintuitive: take a Harvard class.

“One of the classes I'm taking is actually CS 50 because it's online,” Marks said. “It's been really fun because Professor Malan, he records all of his lectures that are going on right now, so I can find them on YouTube and do them, and he has all the problem sets from last year, so I'm completing them. So I sort of feel like I'm still slightly there in spirit.”