Varsity Athletes Bubble Up from Concentrated Pockets Across U.S., Internationally 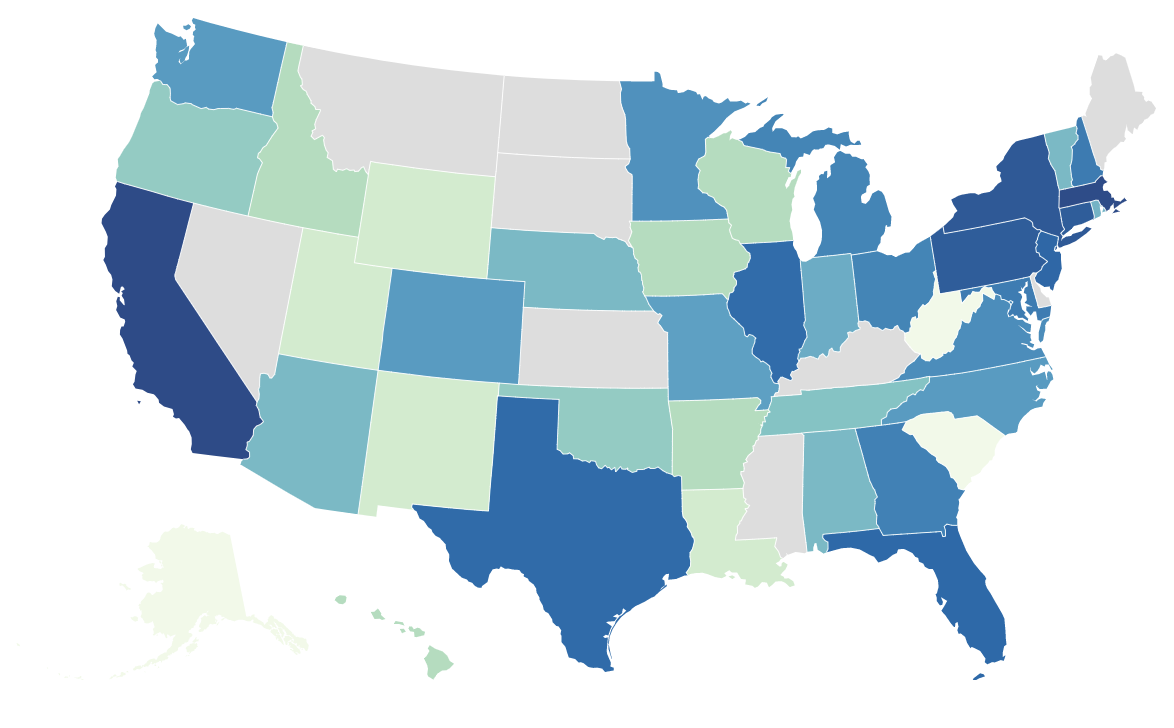 Nearly 1200 students — roughly 20 percent of the student body — participate in one of Harvard’s 42 varsity teams, the most offered among NCAA Division I colleges.

But that group of students is not a perfect cross-section of the College more broadly — especially when it comes to their hometowns.

To examine the high school background of varsity athletes at Harvard, The Crimson analyzed the composition of students listed on Harvard Athletics Department rosters. The data revealed pockets of the United States which send noticeably higher numbers of athletes to Harvard and consistent trends in the regions — and often, schools — from which certain teams and sports drew athletes.

Harvard athletes’ hometowns were concentrated in the Northeast, with an even greater percentage of the athlete population hailing from the region than the general student population. The data also revealed an underrepresentation of international student-athletes from Asia and Africa, especially in comparison to Europe and Oceania.

Some teams and sports showed tendencies to consistently take in athletes from certain regions, and at times even particular schools. More than half of the athletes who attended high school in the U.S. came from the top 200 counties by median family income. Twelve out of the 19 high schools with more than five alumni who are current Harvard varsity athletes were private schools in the Northeast.

Two of Harvard’s oldest sports — lacrosse and rowing, both established in the 1800s — have disproportionately high representation from Northeastern states as compared to other regions of the country.

Harvard spokesperson Rachael Dane commented in an emailed statement that the Office of Admissions & Financial Aid does not collect or provide regional data for only athletes.

“Harvard admissions breaks down regional data for [all] applicants, not just athletes. We do not track that information and thus I will not be providing it,” Dane wrote.

One out of every two Harvard athletes who attended high school in the U.S. did so in the Northeast, while only 5.5 percent of U.S. student-athletes graduated high school in the Southeast. Just four out of the eleven states in the Northeast — Connecticut, Massachusetts, New York, and Pennsylvania — accounted for 72 percent of athletes from the region.

Overall, the highest number of student athletes attended high school in California, with 140 students coming from the state. Massachusetts was a close second with 137. Overall, the five states with the most athletes — California and Massachusetts, along with New York, Pennsylvania, and Connecticut — sent more than half of all athletes who applied from within the U.S.

Kansas, Kentucky, Montana, Nevada, North Dakota, and South Dakota did not have any athletes who participated in sports in the past two academic years.

Ninety-seven percent of athletes from California attended high school in a county in the top 50 percent of those in California by median family income.

More than half of athletes who went to high school in the U.S. graduated from one of the 200 counties with the highest median family income in the country. The Crimson’s annual freshman class survey showed that 29.8 percent of surveyed recruited athletes in the class of 2024 reported coming from a family whose annual income topped $250,000.

Fifteen percent of varsity athletes attended a high school outside of the U.S. Students from the United Kingdom, Canada, and Australia — the three most represented non-U.S. countries — made up 58 percent of all international student athletes.

In comparison to Europe, North America, and Oceania — which represented 88.5% of all international athletes — all other continents were largely underrepresented. Five of the students originally from continents such as Asia and Africa attended high school in the U.S, and are therefore not included as international students.

Only seven international student athletes attended high school in an African country: three from South Africa, three from Egypt on the squash teams, and one from Ethiopia on the women’s cross country team.

In total, there were only five students who went to high school in Asia, representing Japan, Singapore, Malaysia, and China.

Men’s soccer, men’s squash, and men’s and women’s track and field attracted the students from the most diverse countries.

Nineteen high schools had more than five alumni as current Harvard varsity athletes. Twelve were private high schools in the Northeast, and six were private schools in California. Eton College in the U.K. was the exception, from which four of five students were heavyweight rowers.

The Noble and Greenough School sent 15 students to Harvard listed on varsity team rosters — all but one played lacrosse, ice hockey, or rowed. St. Paul’s School and Milton Academy boasted the second most graduates on Harvard varsity teams with nine each.

Phillips Exeter Academy had the third most with seven; and Buckingham Browne & Nichols School, Choate Rosemary Hall, and Sacred Heart Schools had the fourth most with six each.

It was not uncommon for athletes from the same high school to compete in the same sport.

Overall, heavyweight rowing, ice hockey, water polo, and football were the sports that most consistently had athletes from the same schools. All recruits from the Groton School and Eton College are on one of Harvard’s four rowing teams.

Many teams had no athletes from certain regions: an ice hockey player, water polo player, or skier from the South was as difficult to come by as a tennis or golf player from the Midwest.

A majority of skiers, sailors, wrestlers, lacrosse players were from the Northeast.

Water polo was overwhelmingly represented by the West, and 80 percent of water polo players were from the state of California. Softball and men’s volleyball were the only other teams that had a majority representation from the West.

The Southeast did not appear to be a popular location for either athletes in general or for any team in particular. Only four teams had a quarter or more of its athletes coming from the Southeast. The Southwest had even less representation — men’s baseball was the only team with more than 10 percent of athletes from the region.

Men’s squash was the only team to have a majority of international student-athletes. Of the international squash players, a quarter were from the U.K., another quarter from Egypt, and a third from Canada.

Four more teams — women’s squash, men’s heavyweight rowing, men’s tennis, and field hockey — had more than 40 percent representation from abroad. But among all of these international student-athletes, just two — athletes on the women’s squash team from Egypt — were not from Europe, Oceania, or South Africa.

To gather data for this article, The Crimson cross-referenced the two years of rosters, which are available on the Athletics Department website. The Crimson adjusted individual data points when other online sources indicated that high school names or hometowns were incorrectly included or omitted on the rosters. Information for freshmen whose names appeared on the roster without hometowns or high schools was found on various recruiting websites.

Students whose names appeared on rosters for multiple teams were counted only once in the total number of students. Students who attended online schools were not included in location data.

When students are referred to as “from” a certain area, this indicates their high school location, rather than hometown, unless explicitly stated.

For the purpose of the article, an international student is defined as one who applied from a high school outside of the U.S., including from U.S. territories.