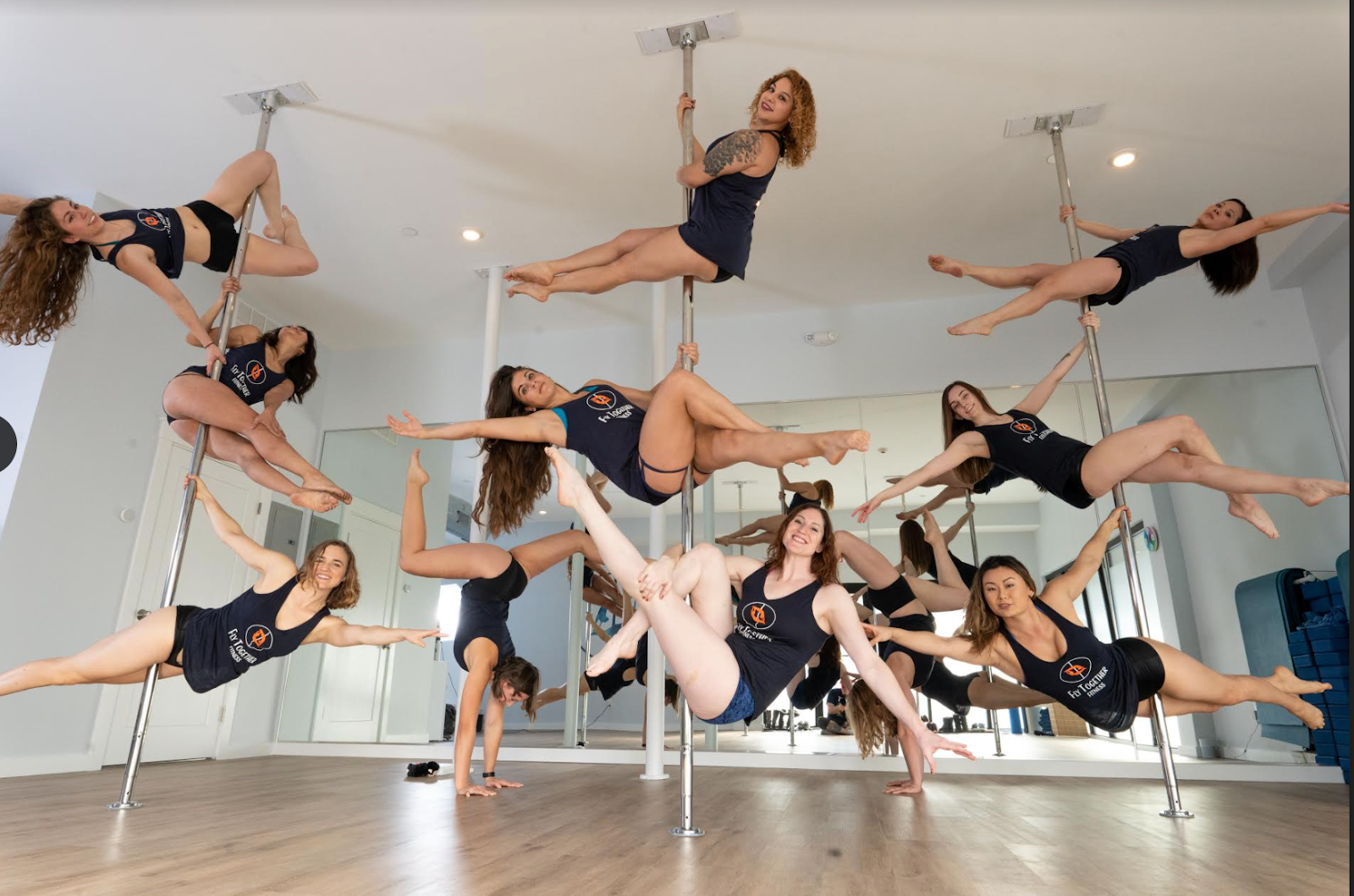 The 11 co-owners of Fly Together Fitness are biologists, musicians, educators, and real estate brokers; their ages range from 25 to 53 years old.
Advertisement
Advertisement

A New Spin on Pole

The 11 co-owners of Fly Together Fitness are biologists, musicians, educators, and real estate brokers; their ages range from 25 to 53 years old. Despite their diverse backgrounds, a shared love of pole dancing inspired them to build their own cozy, brightly-lit studio in Somerville.
By Sophia S. Liang and Grace R. O'Sullivan

The 11 co-owners of Fly Together Fitness are biologists, musicians, educators, and real estate brokers; their ages range from 25 to 53 years old. Rachel M. Rudloff, a doctoral student at Harvard, was hoping to reduce some of the stress from graduate school, and Jenny Fernandez wanted an emotional outlet after the passing of her sister. Tamar H. Forman-Gejrot grew up participating in dance and acrobatics, while others had never considered themselves as athletes. Despite their diverse backgrounds, a shared love of pole dancing inspired them to build their own cozy, brightly-lit studio in Somerville.

When she first saw a video of a pole dance performance, Jenn C. Quirnbach says, “I was just blown away by the strength, the creativity, the moves that I saw.”

In addition to the satisfaction of pulling off a great trick, the women attribute their passion for pole to the supportive community surrounding the sport. “The way someone teaches a class just keeps you wanting more and coming back,” Fernandez says.

The co-owners met while training at the same pole studio in Boston — some as instructors, some as students. They soon discovered they shared a dream of opening a studio of their own someday. Noting a lack of small studios in the greater Boston area, they envisioned a new community-oriented space that was environmentally conscious and inclusive to all.

“I think I speak for everyone that it seem[ed] like an impossible task to do it on our own, and as a group, it really became possible,” Forman-Gejrot says.

For nearly a year before opening their studio in December 2020, the team met over dinners to formulate their business plan and solidify their mission. Making decisions with 11 stakeholders is no small feat, and to unify the wide array of perspectives among them, Fly Together operates on a “consensus-driven business model.”

At one of their dinners, the women all wrote down their credit scores and net worth on sticky notes and shared them with one another. “We’ve built a really strong foundation of trust among one another so we're able to make decisions, and it really comes from knowing that we have the same values in mind for our studio,” Forman-Gejrot says.

The women were initially concerned about facing stigma from the community when they attended a Somerville City Council meeting to get their studio approved, but they received “really positive, supportive reactions.”

“They told us we should make the sign bigger,” Melinda J. Malley says.

There is strength in numbers for Fly Together Fitness, as its name suggests. Each team member contributes a unique set of skills and connections. Realtor Angela Guo navigated commercial leases to find a space for the studio. Malley reached out to the Harvard Transactional Law Clinic for assistance with the legal documents required for opening. And when the COVID-19 pandemic hit, Rudloff, an infectious disease expert, put together a list of sanitation protocols, and one owner’s husband, an heating, ventilation, and air conditioning commissioner, improved their studio’s air circulation systems.

Fly Together Fitness found itself facing lockdown just three months after its opening. With the challenges of teaching over a webcam and without access to poles at home, pole dancing in a pandemic might seem impossible. But they found ways to adapt, such as offering rentable poles for at-home classes and learning different teaching methods to accommodate the lack of physical interaction. They even developed an eight-week performance course to build a routine for a virtual showcase in October.

They’ve also adjusted to the climate of 2020 in other ways: “One of our plans is [for] diversity and inclusion, like bringing in more people of color from different neighborhoods [...] We've done trainings on microaggressions and how we combat them, [and] trainings on restorative justice and prison reform,” Fernandez says.

After reopening for in-person classes in September, they have shifted their focus to private lessons and smaller class sizes. They’ve noticed that students are progressing even faster with more personal attention.

“When we talk about what the future of the business [is], I’m really excited about thinking about really fun, unique ways to grow our business and expand that community out and make pole dance accessible to everyone,” says Quirnbach.

— Magazine writer Sophia S. Liang can be reached at sophia.liang@thecrimson.com.