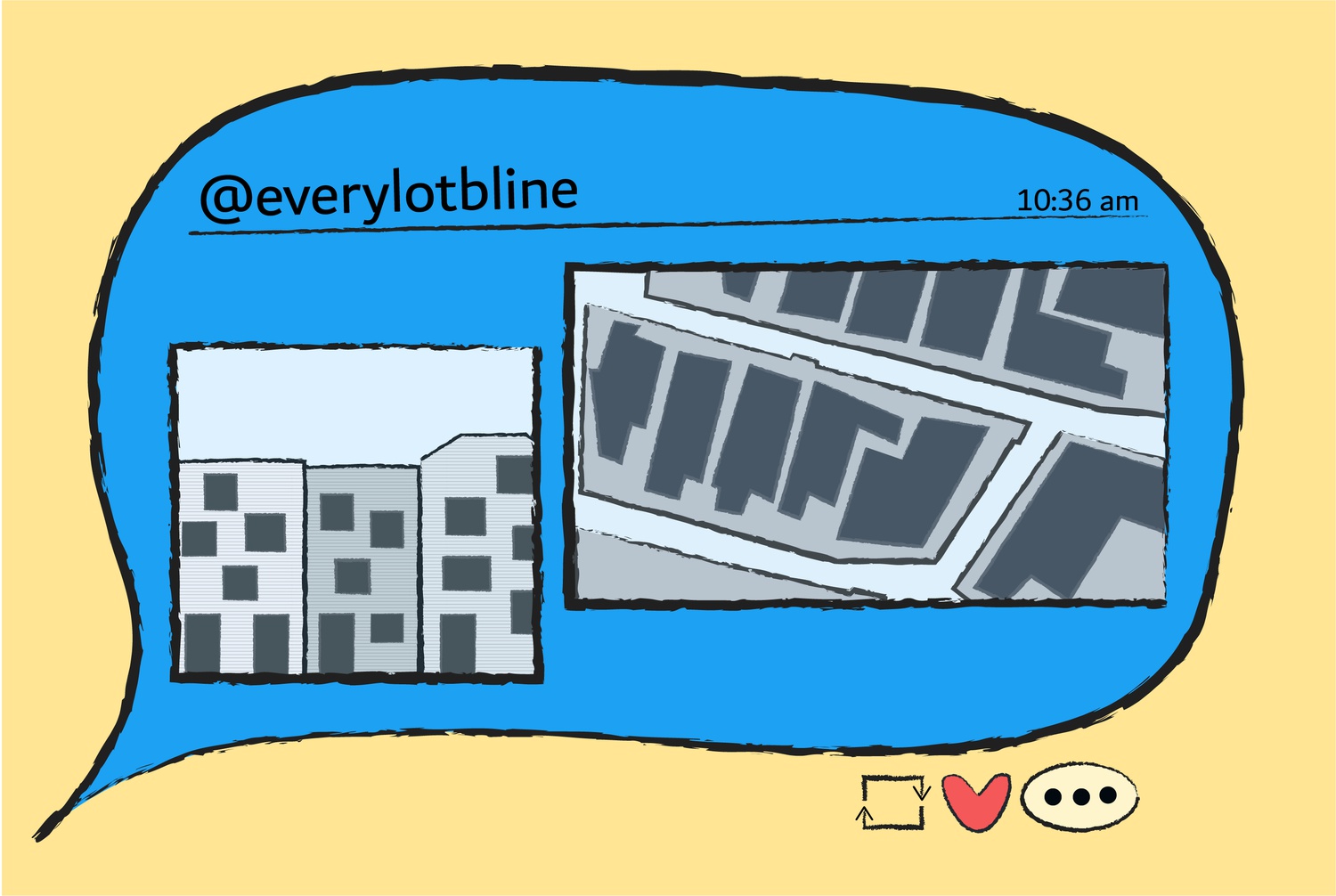 From Brookline to Belgium, ‘Every Lot’ Accounts Abound

Meet the man behind the "Evert Lot" trend taking Twitter by storm.
By Francesca J. Barr and Sam W. Trottier

Gary, Ind. and the entire country of Belgium might seem like an unusual pair. But a recent internet fad gives them a unique common ground: They are two of 40-plus regions featured in the “Every Lot” account trend that has taken Twitter by storm.

Inspired by the original bots created by Neil B. Freeman in 2015 for New York, Chicago, San Francisco, and Los Angeles, these automated accounts post Google Street View photographs of every property indexed in the city’s tax records every half-hour. This is not a quick process. In fact, Freeman estimates that it will take a bot about 30 years to finish capturing just one city, depending on its size.

Something about these accounts has copycats and followers hooked. Part of the reason the “Every Lot” trend has gone both international and rural is because the software Freeman uses to run the bots is open-source, so anybody can adapt it to their own district. The project’s accessibility has enabled fans to expand upon the trend, creating spoof accounts such as “Every Lot Atlantis,” to “Every Lot Fiction,” which pairs each Chicago lot with a tweet-length fictional story.

Locally, there are three “Every Lot” accounts that currently post for Brookline, Cambridge, and Greater Boston. While Freeman runs the Boston account, the Brookline and Cambridge accounts break the “Every Lot” mold. In addition to the typical picture and address, these independent accounts boast the properties’ number of bedrooms, size of the unit, year of construction, last selling price, current price valuation, type of mortgage, and square footage.

Why go to the trouble of adding all of these data points? Why design a new code? Freeman takes the spin-off in stride, explaining with a chuckle that it’s all fun with the bots.

Yes, the Brookline and Cambridge accounts depart from his original vision. And yes, the accounts challenge our concept of privacy in property. But Freeman himself acknowledges that he isn’t some “great composer who wants his work performed some way.”

Freeman thinks the abundance of public property information on the internet may surprise homeowners. All the images on his accounts are taken from Google Streetview, a service that is “barely legal” or “basically restricted” in some countries due to privacy issues. “I think the idea that we just have multiple companies that send cars around photographing everyone and putting it on the internet is something not to take for granted,” he says.

And additional information is not much harder to obtain — the housing details on the Brookline and Cambridge accounts are viewable on quick-to-access city websites.

“It’s useful information as an urban planner,” Freeman explains, “which I am theoretically.” But Freeman makes the design of cities more accessible. For him the “Every Lot” accounts compare two different methods of viewing cities: that of the city tax clerk and that of Google. This juxtaposition reveals the gaps of cities — the gaps between a lot’s physical appearance and the information recorded about it, and gaps between what is paid attention to in a city and what is ignored. But above all, “Every Lot” is an art project to Freeman, and Twitter offers a platform where millions of users can access his exhibits.

“The platform has grown to serve more than just a means of communicating with friends,” he says. And while Freeman isn’t surprised that the original New York account took off, he is somewhat surprised that the bot has now spread beyond his hands. Just this year, “Every Lot” accounts were made for Tokyo, Montreal, Baltimore, Seattle, and many other smaller cities, all by different people.

But “Every Lot” is just one of many projects in the collection of art-meets-urban design found on Freeman’s website, titled “Fake is the new real.” Among the indices you can find “subways at scale,” a piece that compares the size of metro maps around the world with each other, and “obligatory airport retweets,” a bot that retweets every post containing the text “obligatory airport tweet.” Closer to home is the ever-local “charles river almanac,” an artifact of Freeman’s time at Harvard’s Graduate School of Design. Featuring eight pictures of the Boston area, each shot represents a season of his two-year stay in Cambridge. It was also during a stay in Cambridge that Freeman started his most recent “Every Lot Boston” account.

While much of the Twitter trend remains a mystery, the effect of the accounts is clear: restoring purpose, meaning to the physical spaces of the city. Freeman explains that confusion, nostalgia, joy, and curiosity are all important elements of the “Every Lot” project.

As more postings of the originals continue and new accounts arise, there is not a wrong way to appreciate an art project, Freeman notes, especially one like this.