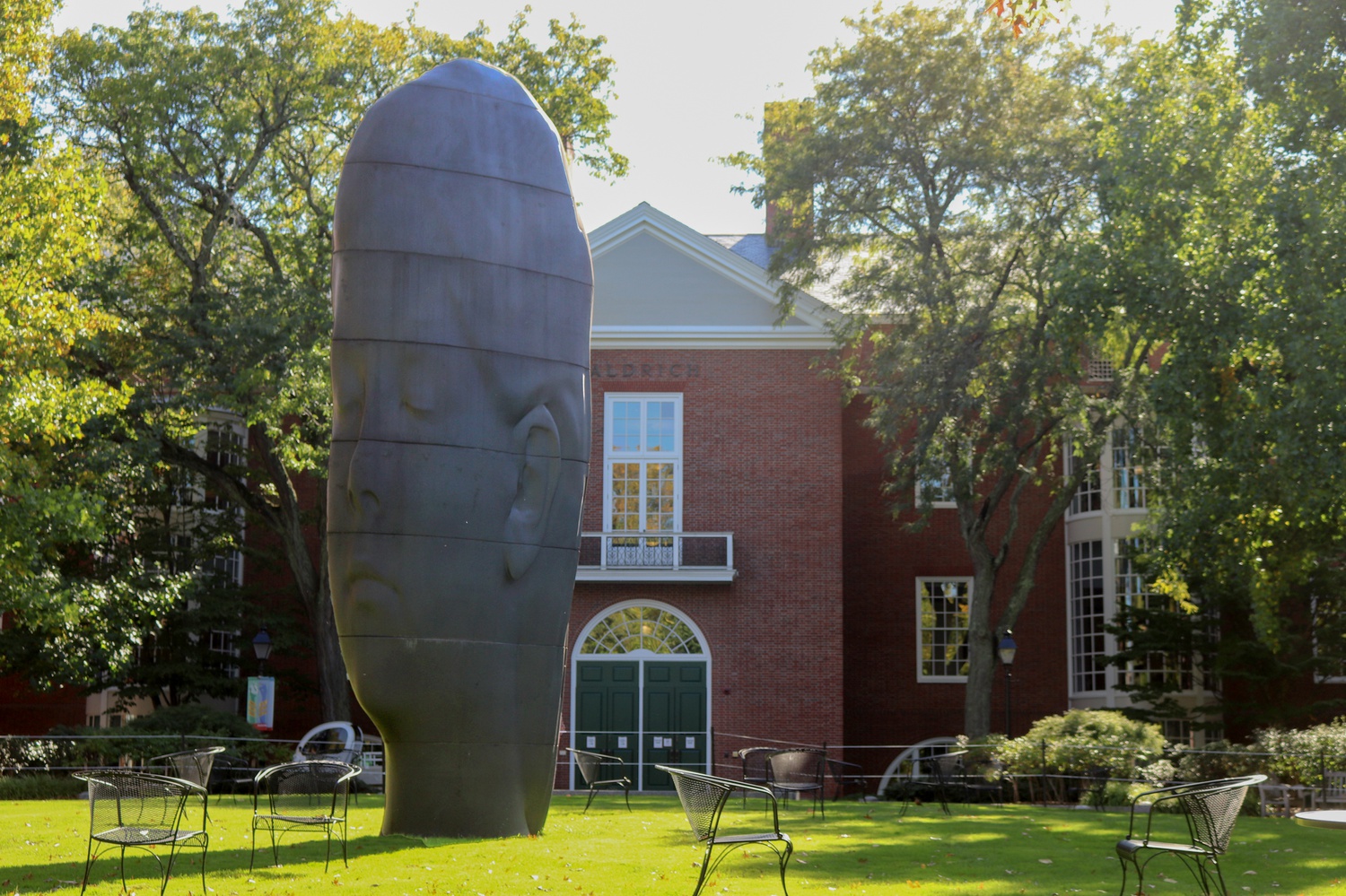 A contemporary art installation sits amid outdoor seating for students on the Business School's Aldrich Lawn. By Santiago A. Saldivar
By Ellen M. Burstein and Carrie Hsu, Crimson Staff Writers

Harvard Business School students praised incoming Dean Srikant M. Datar’s decades of experience at the school, but expressed concern that his appointment was a “missed opportunity” for ongoing diversity initiatives.

Burjis Godrej, a Master of Business Administration student, called Datar a “very good choice” for the position, citing his legacy of experience at the Business School and his efforts to establish the current “hybrid” learning environment for HBS students.

“I think, given that background, he is the best person at this time to steer the Business School in the right direction,” Godrej said.

“I think that that might be part of a legacy that he needs to leave, where if you wanted to go into a career of technology entrepreneurship, HBS becomes the first thing that comes to mind,” Razack said.

Datar has launched a number of initiatives merging the Business School with science and technology programs at Harvard, including launching the school’s joint M.S.-MBA program in biotechnology and life sciences, as well as the M.S.-MBA in engineering sciences.

At a town hall on the day of his announcement, Datar said the pandemic has offered the school opportunities to expand its programs and take advantage of its technological resources.

“A key question for us is how best to exploit the many digital assets we have built, and how we can leverage the case method, the field method, and online learning, as well as virtual, hybrid, and in-person instruction, in all our educational programs, even as we leverage the gift of our extraordinary campus and strengthen the residential learning experience,” Datar said.

Bukie Adebo, an MBA candidate, called Datar a “natural choice” for the deanship.

“He seems like he has really solid credentials, a great background with the school and that he seems future-oriented in terms of the way he's thinking about the MBA program and the direction in which MBA education will move in the future,” Adebo said.

However, Adebo, a co-president of the school’s African American Student Union, also said she previously believed the Business School may “go with a slightly less traditional candidate,” given the school’s recent diversity and representation challenges.

The Business School has publicly grappled in recent months with a lack of diversity among its faculty and student body. In September, Nohria announced an “Action Plan for Racial Equity,” which established a new role for a diversity officer, as well as committees that will seek to recruit Black students and faculty and promote anti-racist research.

Razack called the appointment a potential “missed opportunity to diversify, at least on the dimension of gender” — a move that he felt could have been a strong signal from a “powerful institution” like Harvard. The Business School has never appointed a female dean.

“Given the atmosphere of all these discussions that we're having here at Harvard, but just in the broader discussion that we see on the media and the news, etc., discussions about equality and balancing the playing field, it almost feels like HBS misread the mood in the room, to some degree,” Razack said.

Adebo, who is a member of the student committee developing the newly launched action plan, said she was concerned about how Datar would execute the initiative.

“I was hoping for somebody who seemed to put more emphasis or priority on diversity, equity and inclusion, and from everything that I've read about him so far, I haven't really seen that,” Adebo said. “I haven't seen that that's an area that he puts a lot of energy and attention.”

Business School spokesperson Brian Kenny wrote in an emailed statement that students will feel “very optimistic about the future” of the school after they meet with Datar. He added that Datar has already met with a “range” of student groups.

“Those who are concerned about Srikant's commitment to diversity in all its dimensions and inclusion and racial and gender equity should take heart in the comments he made at his welcome address where he said, ‘We must adopt and act upon this plan with speed and urgency, striving to advance racial equity within HBS and to educate leaders who advance racial equity in their organizations and their communities," Kenny wrote. "This work will not be easy. But it is key to our mission of educating leaders who make a difference in the world.’”