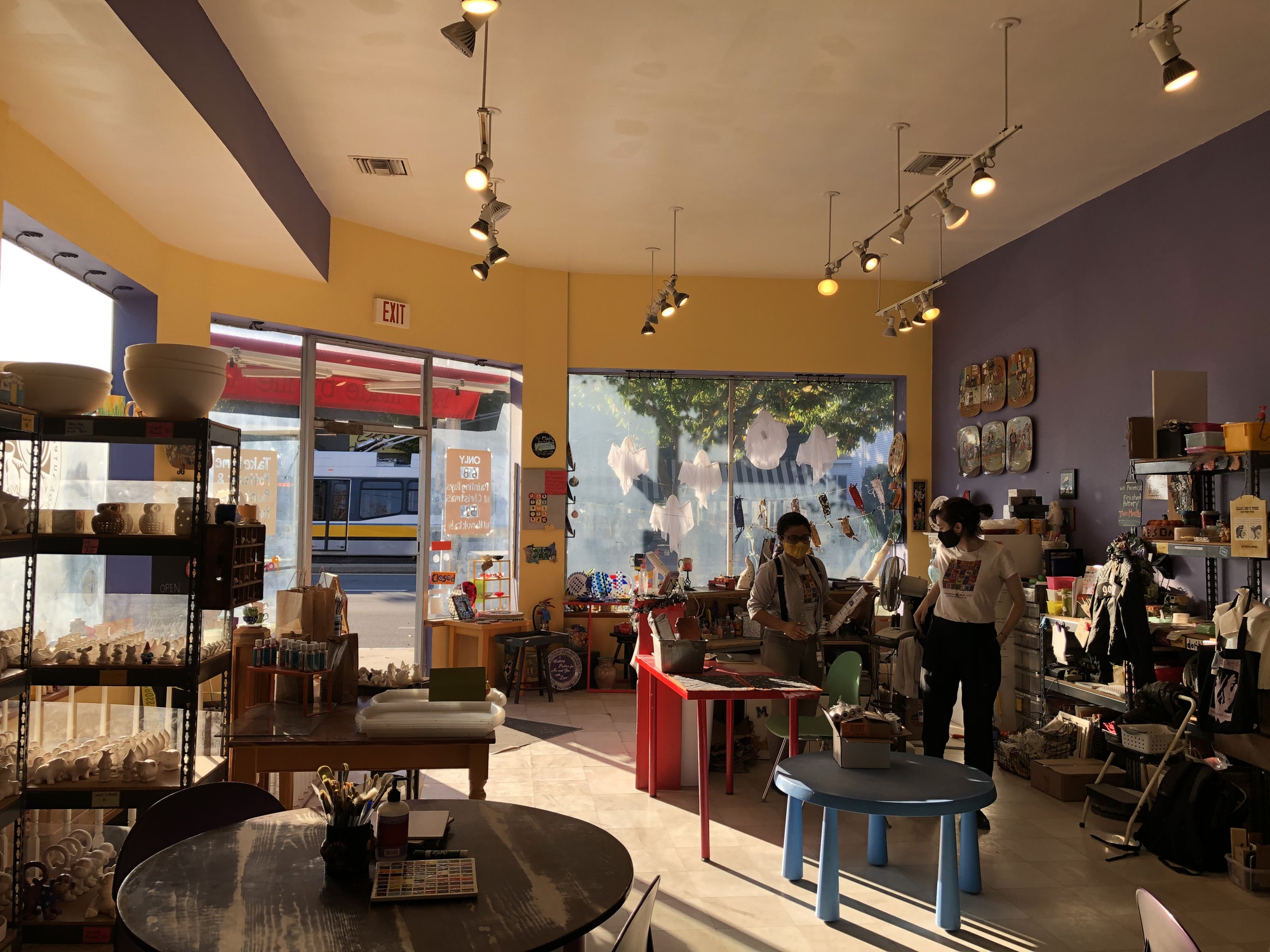 Made by Me — a paint-your-own-pottery studio run by queer women, in the process of selling ownership to its employees — is real, open for business, and located right on Mass. Ave.
Advertisement
Advertisement

A Creatrix Walks Into an Anticapitalist Pottery Bar(n)

Made by Me — a paint-your-own-pottery studio run by queer women, in the process of selling ownership to its employees —  is real, open for business, and located right on Mass. Ave.
By Sarah W. Faber and Maya M. F. Wilson

What does it look like for two “anticapitalists” to run a business? Paradoxical, but possible. Made by Me — a paint-your-own-pottery studio run by queer women, in the process of selling ownership to its employees — is real, open for business, and located right on Mass. Ave.

“We joke about how we, anticapitalist human beings, are running a corporation. But I did have a friend saying that a paint-your-own-pottery shop is a long way from Jeff Bezos,” explains Made by Me’s vice president M. E. Lee with a laugh. The studio itself is a long way from an Amazon warehouse: The afternoon sun streams through floor-to-ceiling windows, illuminating pottery in various stages of completion. The shelves are stacked with clean white pieces, waiting to be selected and transformed by customers, and samples displaying children’s handprints and footprints hang on the walls. A group of ceramic figurines holding protest signs sits in the front window display, and completed pieces ready for pick up sit on a table near the front, glossy and bright after firing.

Over the past few months, Lee and her colleague, Amber Ostrander, have guided Made By Me through two major shifts: a change in ownership and corporate structure, and a change in business practices as a result of the pandemic.

The studio, originally called Clayroom North, was first opened by a family at its former location in Harvard Square in 1998. The previous owner, Bessie Blum, took over the studio in 2000, changed the name to Made by Me, and moved it to its current location on Mass. Ave. in 2003. Ever since, it has provided “a safe space for folx of all ages and identities to come to create, recharge, and have fun,” as per their website.

“Everybody remembers Harvard Square as it looked when they moved to Boston, and that’s the true Harvard Square,” Ostrander says. But new developments leave Cambridge looking different year after year, and Made by Me has felt the effects of this buildout. “It’s getting harder and harder to keep up as small businesses,” she adds. “Everything that’s being built is luxury.”

While the pandemic has slowed down their business, it has also provided them the opportunity to restructure, as the store is in the process of shifting to an employee-owned model.

In August, Blum, who owned the studio at that time, realized it was time for her to retire. She approached Ostrander, who’d been at the studio for five years, to see if she might be interested in purchasing it. She was.

Blum’s departure was bittersweet. “Bessie is like family, and this place has been really important to me in my own sort of personal journey,” Lee says.

Ostrander agrees, adding, “My dad was in the Air Force, so we moved a lot. I was in all these different cities and every time I would always find a place like this. So when I moved here and I needed just a part time job, I kind of just wandered in off the street, asked Bessie to hire me. And she did. And within the first year I was like, I could do this forever.”

Ostrander purchased the studio on Oct. 1, and once the paperwork is finalized, Lee and Ostrander will become co-owners. Given that Ostrander and Lee are the only full-time employees at the moment, Made By Me will then be effectively an employee-owned business.

Under an employee-owned model, which is used by only 0.3 percent of US businesses as of 2017, future employees can choose to buy into the company, though it is not a requirement for employment. Made By Me’s version of an employee-owned business has two job titles: Studio Artist and Creatrix.

“Studio Artists are non-shareholders, and a Creatrix is an owner,” Ostrander explains. “‘Creatrix’ is Latin for the divine feminine creator, which I thought was appropriate for our women-owned art studio, so we are incorporated as Creatrix Industries Inc.” An employee can purchase any number of shares to become either a partial owner, who earns a percent of surplus profit in relation to the number of shares held; a partner, who has an equal vote in decision making; or a Creatrix — their own boss.

“I think the community piece is really the anchor for [the employee-owned model] because we wanted the physical corporate structural model to reflect our values,” Lee says. Before the pandemic, Made By Me often partnered with community organizations: Patients from the Cambridge Eating Disorder Center and 3East, an adolescent dialectical behavior therapy program, would regularly come to paint.

Though they’re not currently able to host groups from the CEDC and 3East because of social distancing guidelines, Lee and Ostrander are still focused on maintaining their relationship with their community. Since June, Made By Me has offered “Port-A-Pottery” as a socially-distant way to offer pottery painting. Customers can pick up a kit that includes a piece to paint (the “Coffee Date” kit, for example, has two small latte mugs), as well as paints, paint brushes, and a palette. Once they’ve painted their pottery, customers drop it off to get fired and can pick up their work within a week.

When they can fill the studio to regular capacity again, Lee and Ostrander have plans for more theme nights and activities. “I think it would be so much fun to do a brunch-style event where everyone paints coffee mugs, and we can partner with a local coffee shop so that people can sample the coffee. When they come to pick up their fired mugs, it comes with the grounds of the coffee they were drinking,” Ostrander says. Other ideas include a “Wine and Cheese Board” night where customers can bring a bottle of wine and paint a cheese board, and a “Spaced Out” event where customers can learn how to paint galaxy designs.

“We’re here. How do I help? What else can we do for the community? Especially as the world continues to burn around us, and everything is on fire. How many people can’t afford therapy but can afford to paint a mug?” Ostrander says. “And it’s not at all a replacement — it’s a band-aid on a bullet hole — but it’s still a band-aid, you know, that's the best I can offer them.”