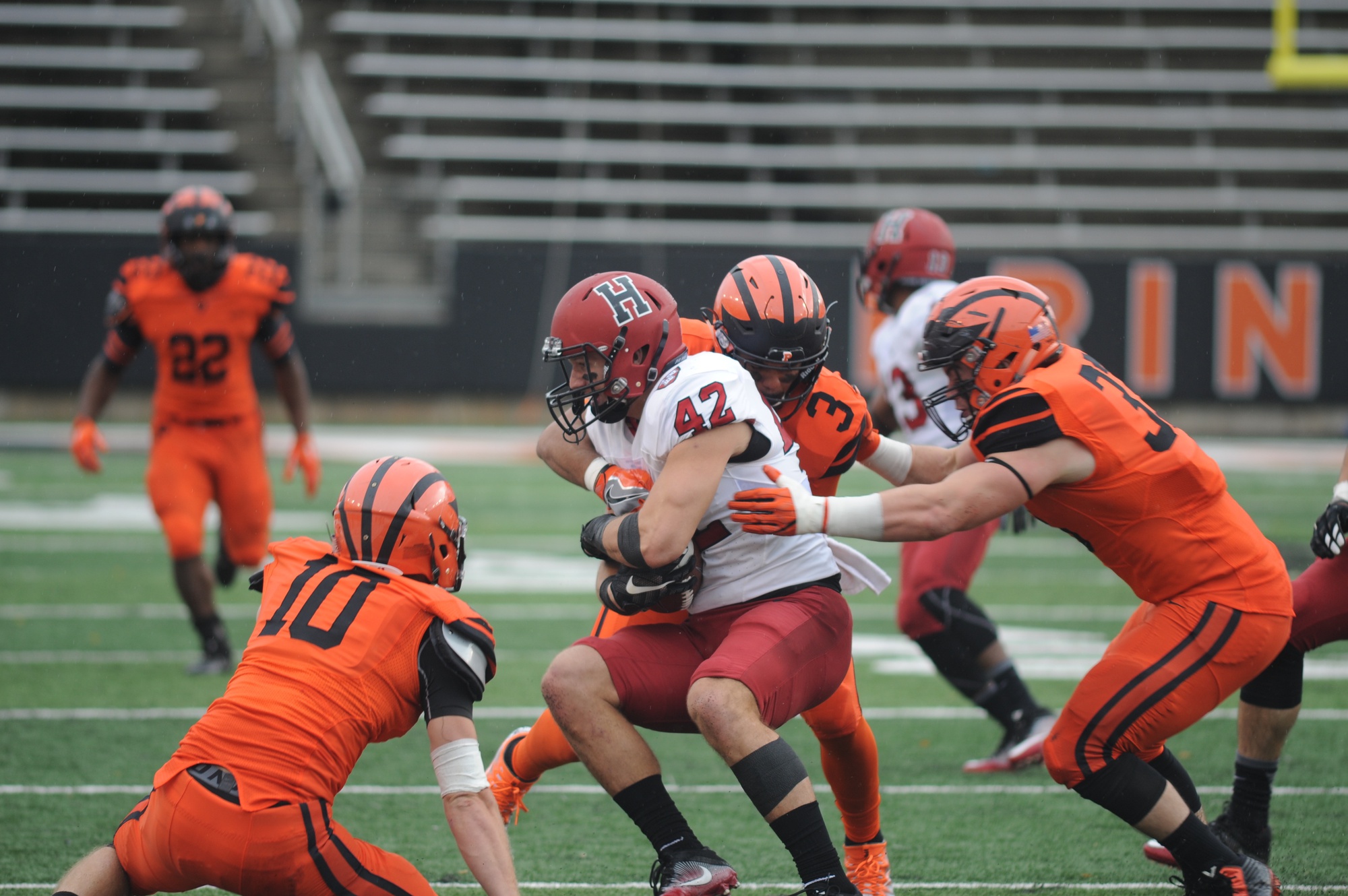 Anthony Firkser '17 battles through a group of Princeton defenders after making a catch. The former tight end is one of nine Harvard players currently on NFL rosters. By Matthew W DeShaw
By Joseph W. Minatel, Crimson Staff Writer

Tight end Anthony Firkser ’17 scored the first-ever touchdown in the NFL Playoffs by a Harvard graduate in the Wild Card game Saturday night. Firkser also came up with a major third-down catch for the Tennessee Titans that helped to seal the upset victory over the New England Patriots in the Crimson alum’s return to Massachusetts.

In a day in which the Titans’ ground game dominated thanks to Derrick Henry’s 182 rushing yards on 34 carries, Firkser was able to lead Tennessee in both receptions and receiving yards with a pair of catches for 23 yards. While only coming up with two receptions, both were in crucial situations for the Titans. The first of which was his 12-yard receiving touchdown with 5:39 remaining in the first quarter. The score gave the Titans an early 7-3 lead.

Firkser went without another catch well into the fourth quarter, when Tennessee led 14-13. With 2:54 remaining, the Titans facing an important third down and eight from their own 15-yard line. Quarterback Ryan Tannehill was able to find Firkser for an 11-yard gain down the left sideline for a first down that helped Tennessee milk most of the clock and essentially seal the game. The Titans eventually would win 20-13 to advance to the Divisional Round, where they will face the Baltimore Ravens.

Firkser’s touchdown was the first-ever by a Harvard alum in the NFL Playoffs. Firkser, a former Lowellian who graduated in 2017 with a concentration in Applied Mathematics, adds to an impressive line of Crimson tight ends to see recent success in the pros, including Cameron Brate ’16 (Buccaneers), Ben Braunecker ’16 (Bears), Tyler Ott ’14 (Seahawks). Another Harvard tight end, Kyle Juszczyk ’13, has made the move to fullback and has been named a Pro Bowler at the position with the San Francisco 49ers.

Ott and Juszczyk are both still alive in the NFL Playoffs, a position that the Titans also find themselves in thanks to a pair of timely plays by Firkser.

—Staff writer Joseph W. Minatel can be reached at joseph.minatel@thecrimson.com.