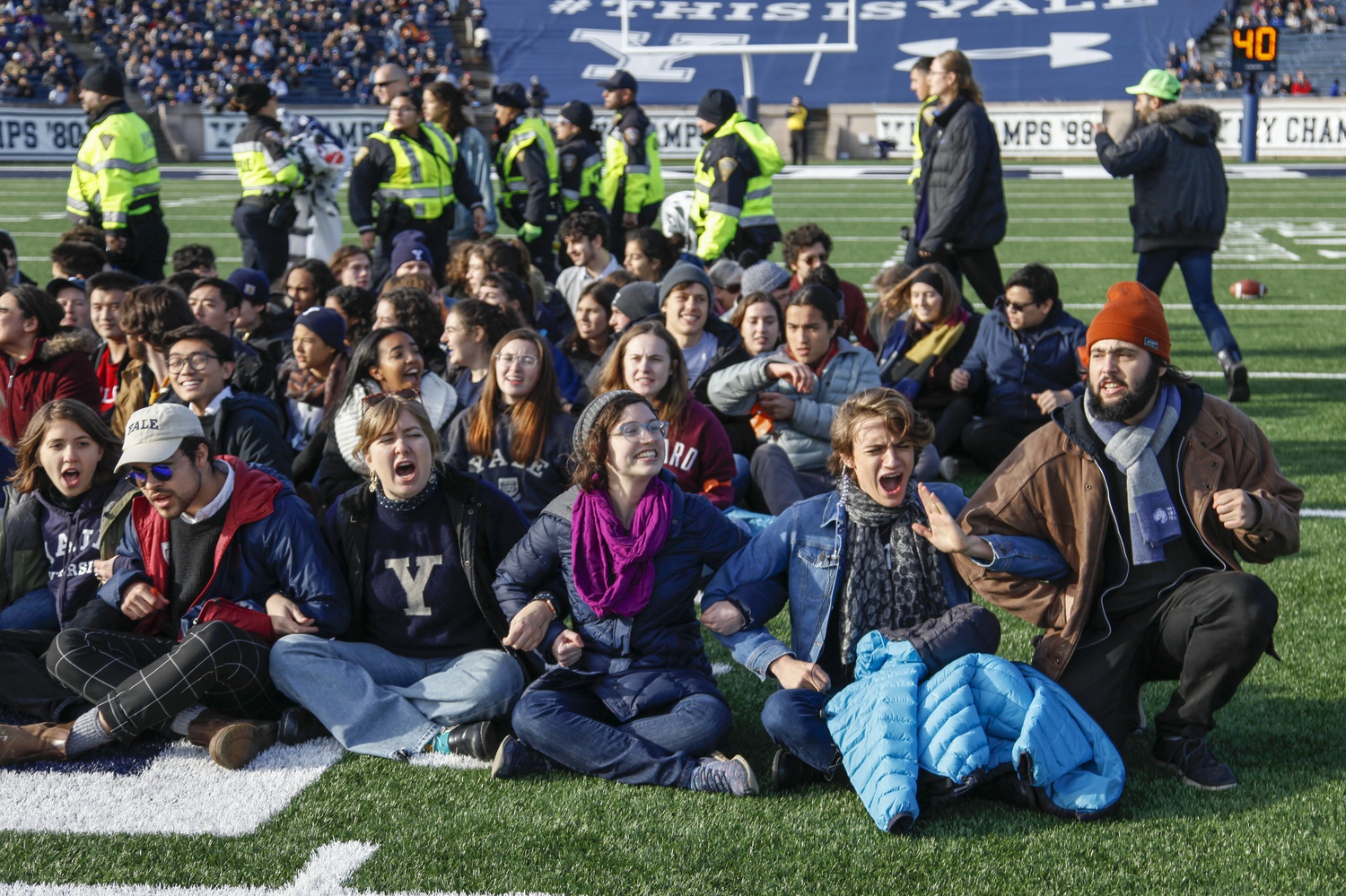 A Connecticut judge dismissed all charges Monday against the ten Harvard students and alumni who participated in the November divestment demonstration at the Harvard-Yale football game. By Timothy R. O'Meara
By Michelle G. Kurilla, Crimson Staff Writer

A Connecticut judge dismissed all charges Monday against ten Harvard students and alumni who participated in a November divestment demonstration at the Harvard-Yale football game, according to Hugh F. Keefe, the students’ lawyer.

Police arrested the protesters in November, after dozens of activists and hundreds of spectators stormed the field at halftime during the 136th edition of the Harvard-Yale football game. Staging a 30-minute sit-in, they unfurled large banners calling on Harvard and Yale to divest their multi-billion dollar endowments from fossil fuels and Puerto Rican debt, and several refused to leave the field until police placed them under arrest.

At a Dec. 6 hearing, the judge, Phillip Scarpellino, asked the students and alumni to complete community service and return to New Haven, Conn. for Monday's court date.

On Monday — the first day of classes for College students — the protestors traveled to New Haven to fulfill the judge’s orders. At the hearing, their case was annulled, legally erasing any record of their arrest.

Keefe represented the Harvard students arrested during the divestment protest alongside attorney Tara Knight. In an interview Monday, Keefe said he received the outcome he had originally hoped for.

“The disposition I was hoping for would be one where there was no record of any kind,” he said. “I was successful in doing that.”

Now that the charges are void, the protesters will be able to say that they have never been arrested under Connecticut law, according to Keefe.

“Many of these people are seniors and juniors looking for spots in graduate school and jobs,” Keefe said. “It’s very important that we keep their records clean for that purpose.”

The protestors' arrests were set into motion when they refused to vacate the field even as the announcer and police asked them to leave, choosing to exit only after police placed them under arrest. In total, police charged 50 people with disorderly conduct from the demonstration.

Though the protestors were not required to fulfill their community service locally, Scarpellino strongly recommended that students do so with Project Green Thumb, an alternative to paying fines for some offenses in New Haven. The project helps clean up New Haven Green, a public space in the center of the city.

Keefe — who said that he has represented Yale students for years in cases involving protests — said he decided to represent the protesters because he believed in what they were doing.

“I was happy to represent the students — they’re always fun,” he said. “They’re very nice people — and they happen to be dead right on the issue of climate change.”