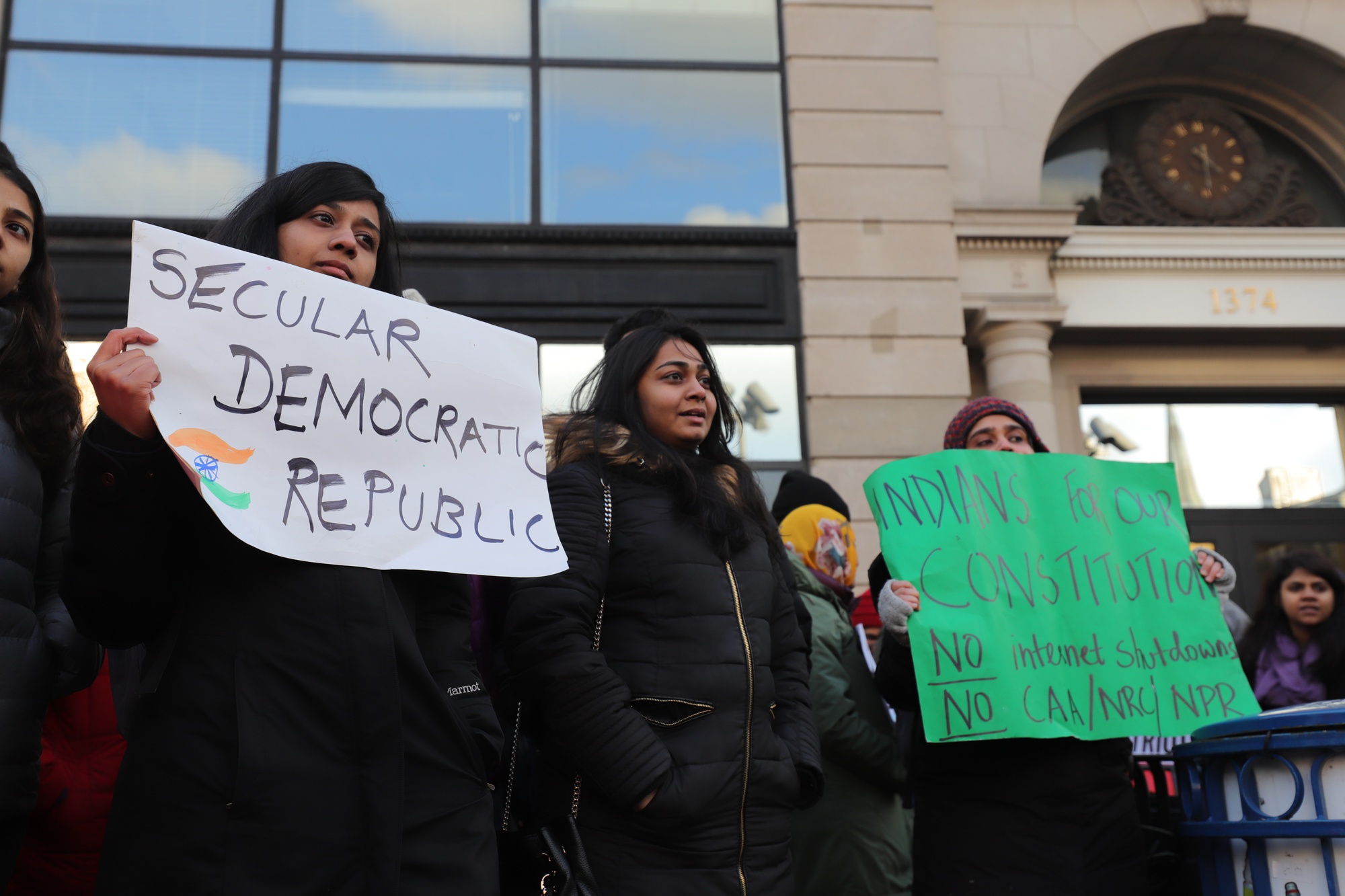 Under a blue tarp hung between four light poles bedecked with Indian flags, a group of Harvard graduate students and local activists staged a 24-hour protest in Harvard Square on Sunday to mark the 70th anniversary of India’s constitution and decry India’s Citizenship Amendment Act. 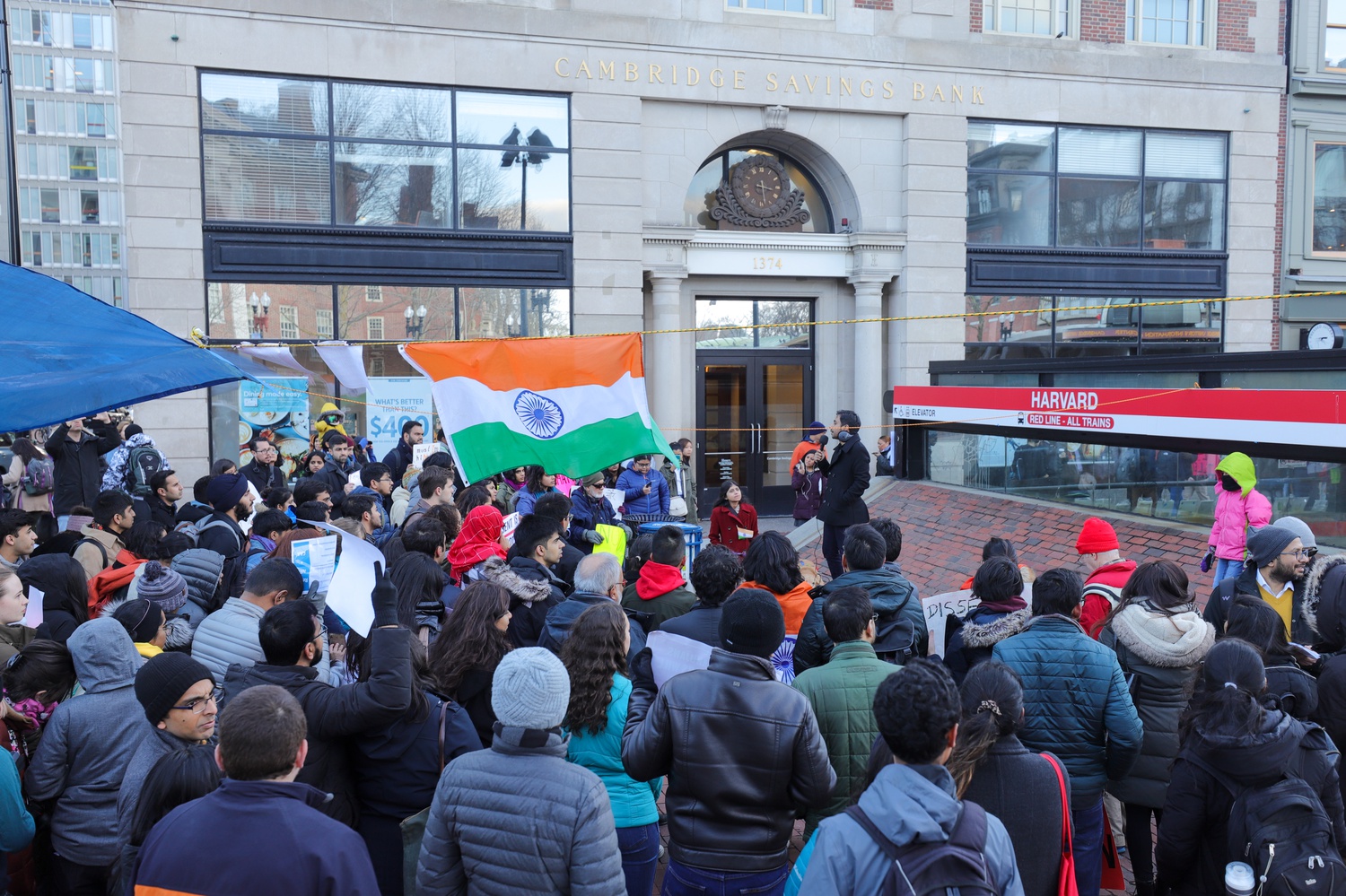 Passed in early December, the Citizenship Amendment Act offers asylum to undocumented immigrants from Bangladesh, Pakistan, and Afghanistan only if they are non-Muslim. Sunday’s protestors, as well as critics in India and across the globe, have condemned the act as justifying anti-Muslim violence and contradicting the secular values espoused by India’s constitution. 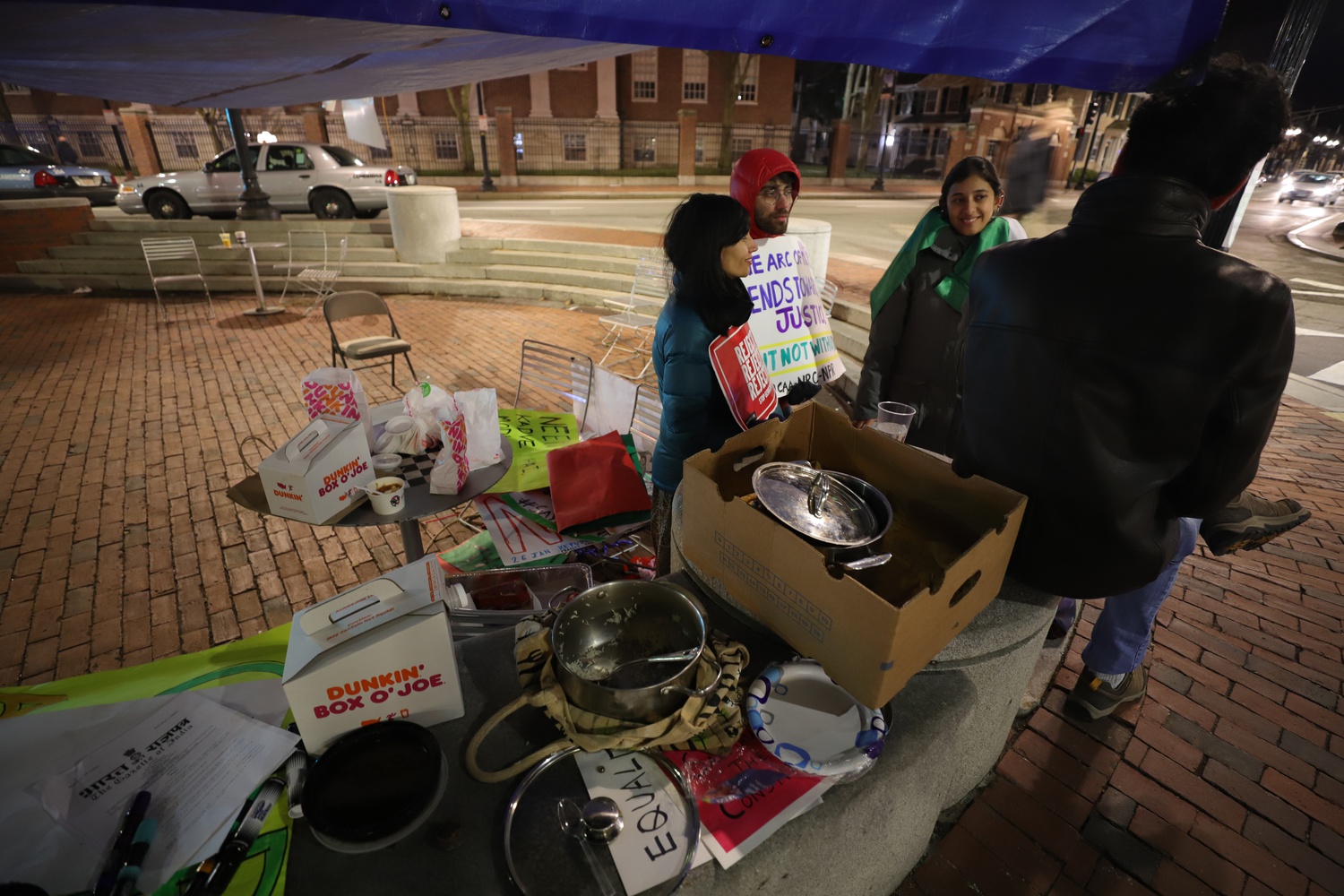 Fewer than 10 participants gathered in the Square when the protest began at midnight. But by 2 p.m., more than 100 Harvard students and Cambridge and Boston residents had joined the demonstration. Protestors ate a potluck Indian lunch; danced to Bollywood music; and sang poems, chants, and traditional Indian songs. Some protesters also delivered speeches. 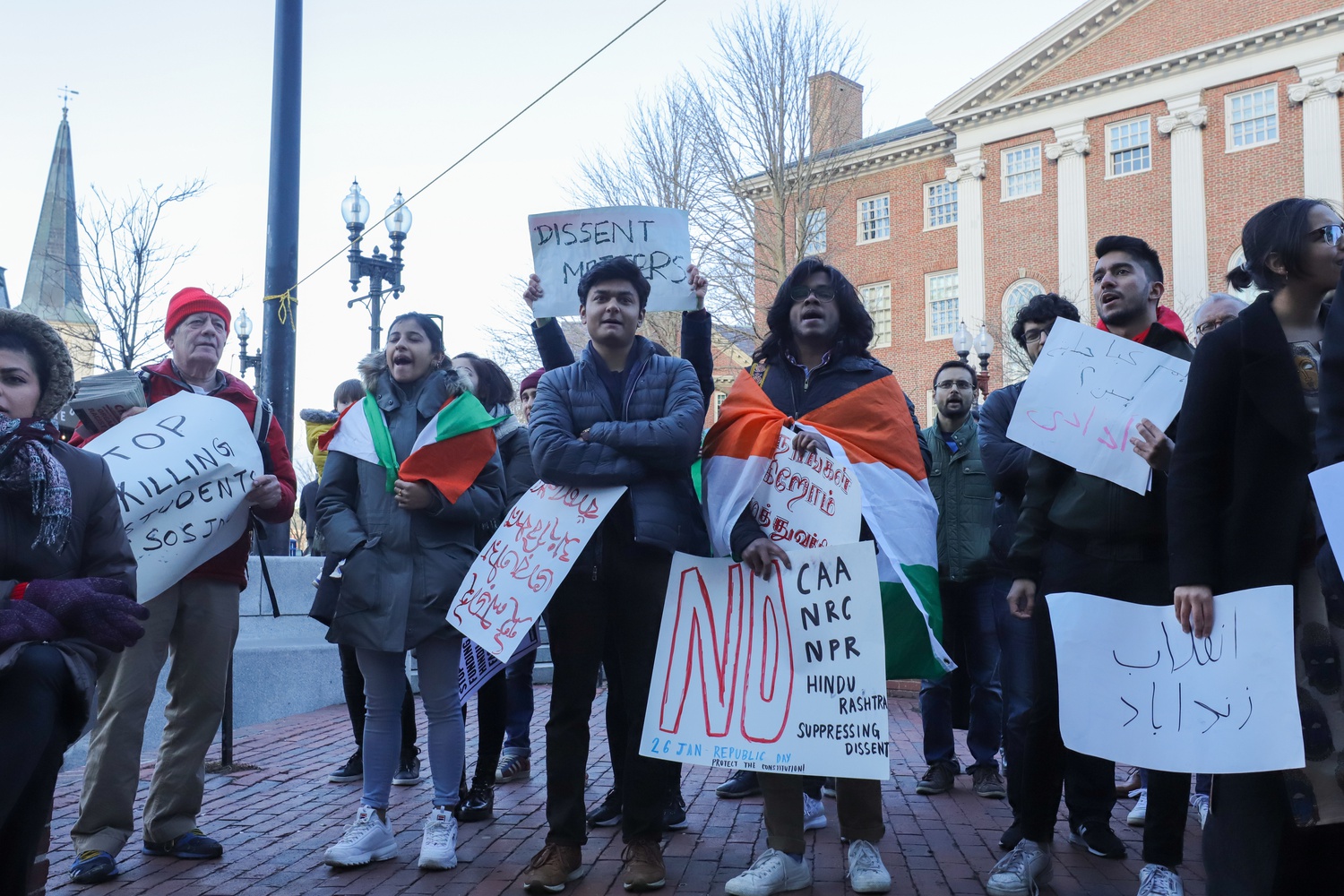 Law enforcement in India has met student protests against the act with forceful suppression, beating students and firing tear gas into crowds. Suraj Yengde, a protestor and a fellow at Harvard Kennedy School, said demonstrators in the Square stood especially in solidarity with women who have been leading the protests in India, including a group of hundreds who have been occupying a street in the Shaheen Bagh neighborhood of Delhi for weeks. 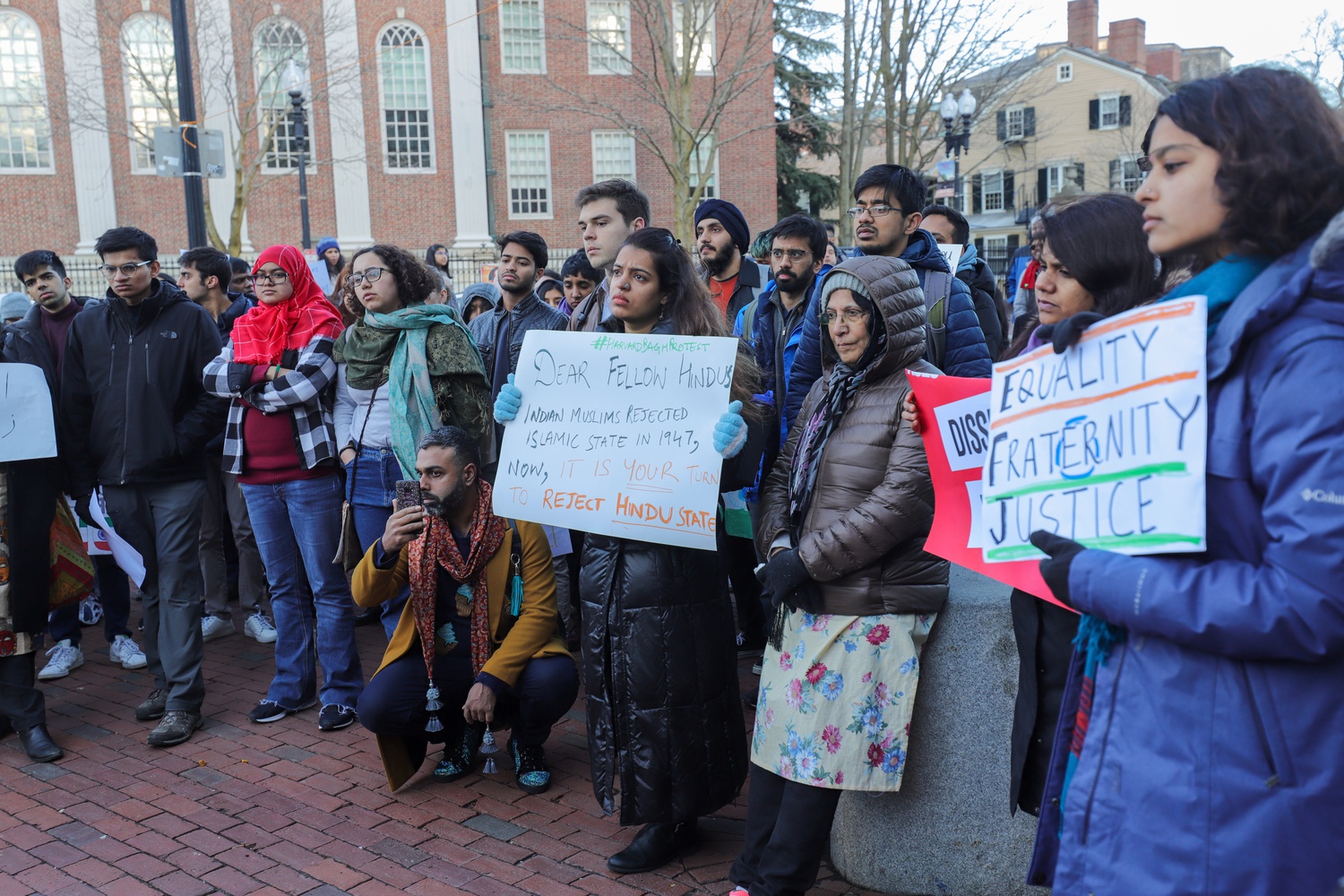 “The purpose of this is two-fold,” said Ruha Shadab, a student at the Kennedy School and one of the protest’s organizers. “One is to express our discontentment with the act itself. And the other is in solidarity with all the student-led movements, which are now just civilian movements, across India.”

Last month, hundreds of Harvard students signed a letter condemning the act and gathered in the Science Center for a similar protest. 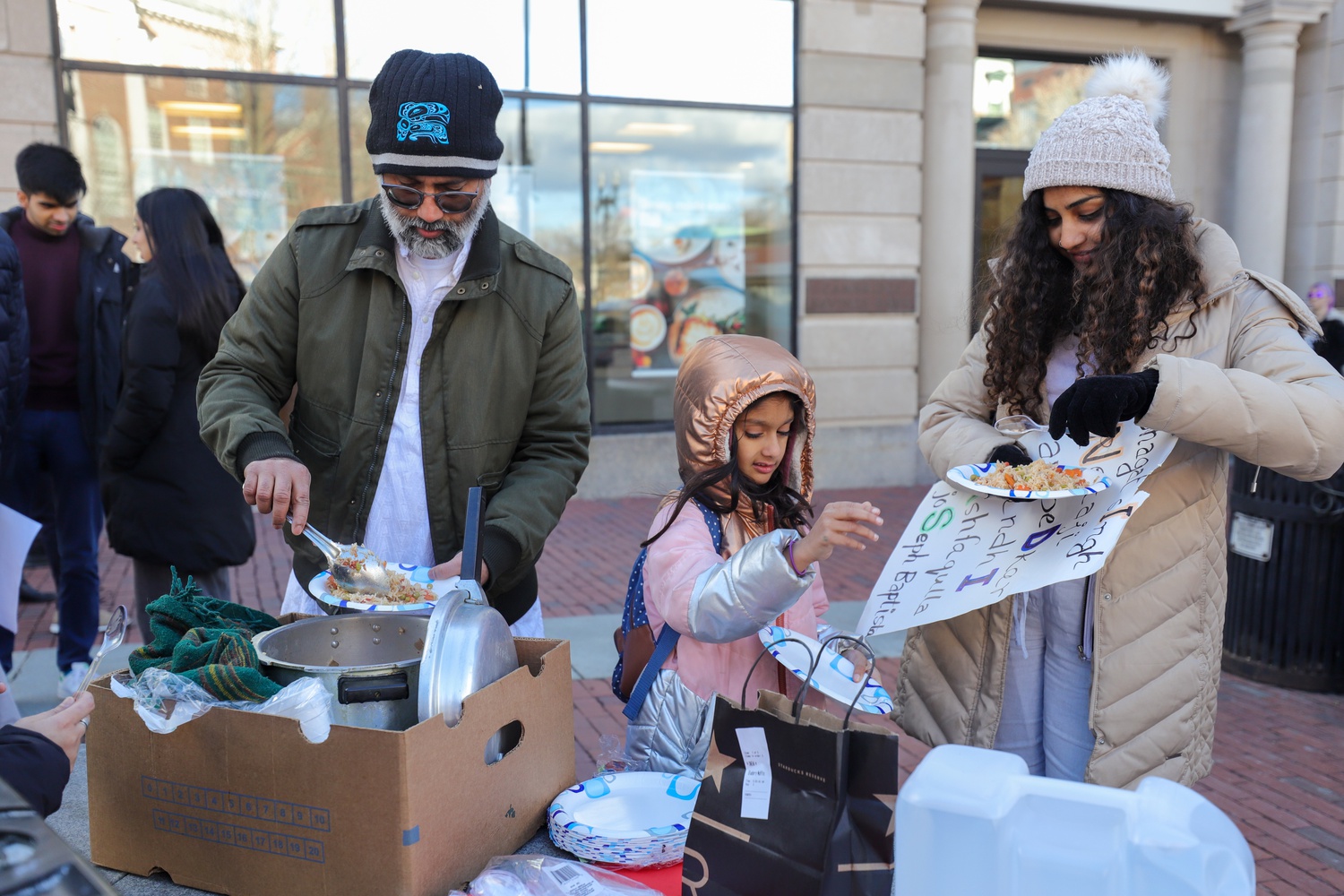 Many of Sunday’s protestors came from beyond Harvard Yard.

“This protest is for everyone. It’s to raise awareness about the atrocities happening in India. Parents with children, students from Boston like myself, we’re all coming out. I’ve been here since 8 a.m,” Rochester Institute of Technology student Aaditya P. Shah said. 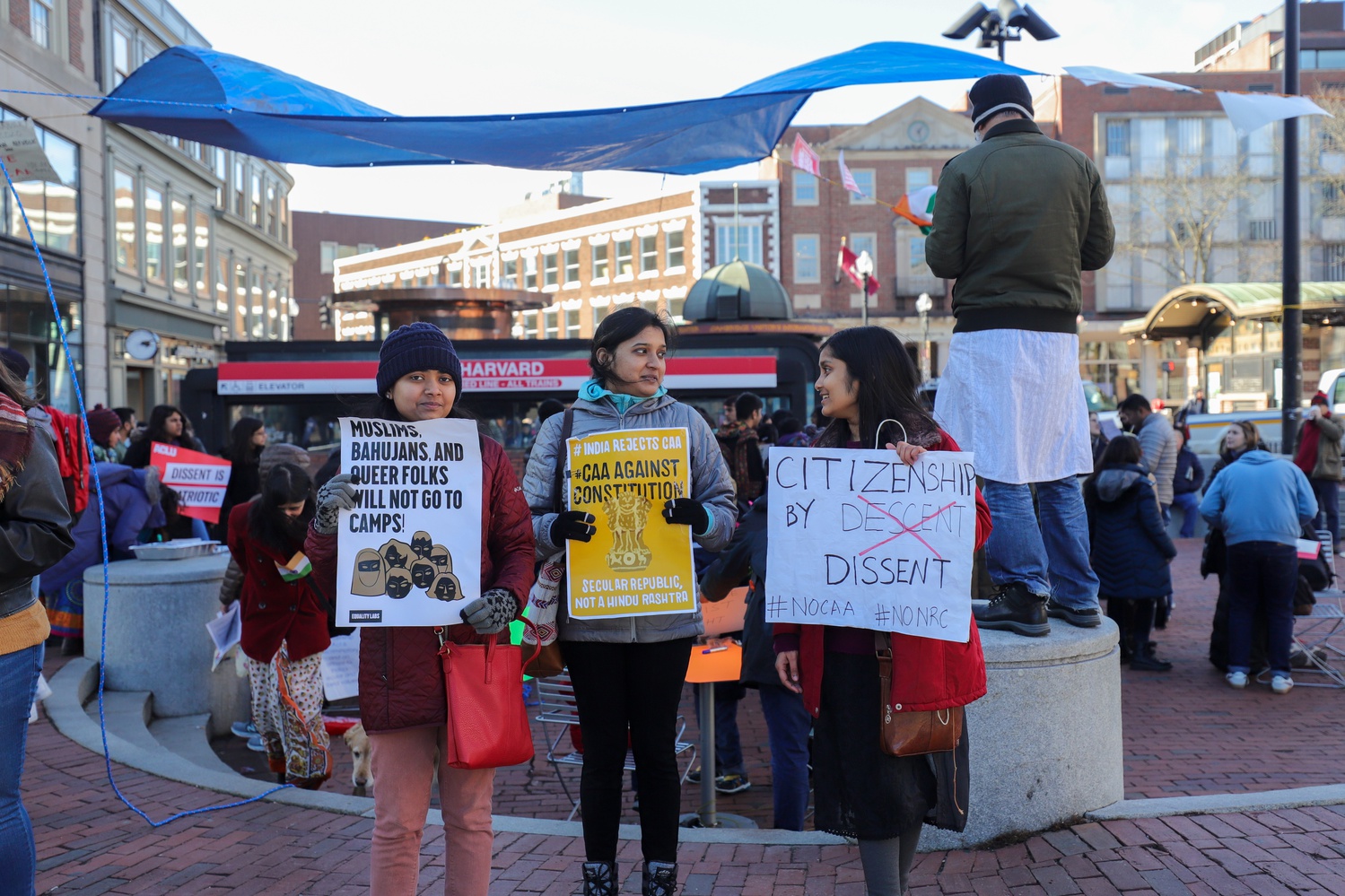 Boston-area activist Arif Hussain gave the opening speech at the protest’s midday rally. He began his speech with a call for celebratory dance, then outlined the protest’s goals. 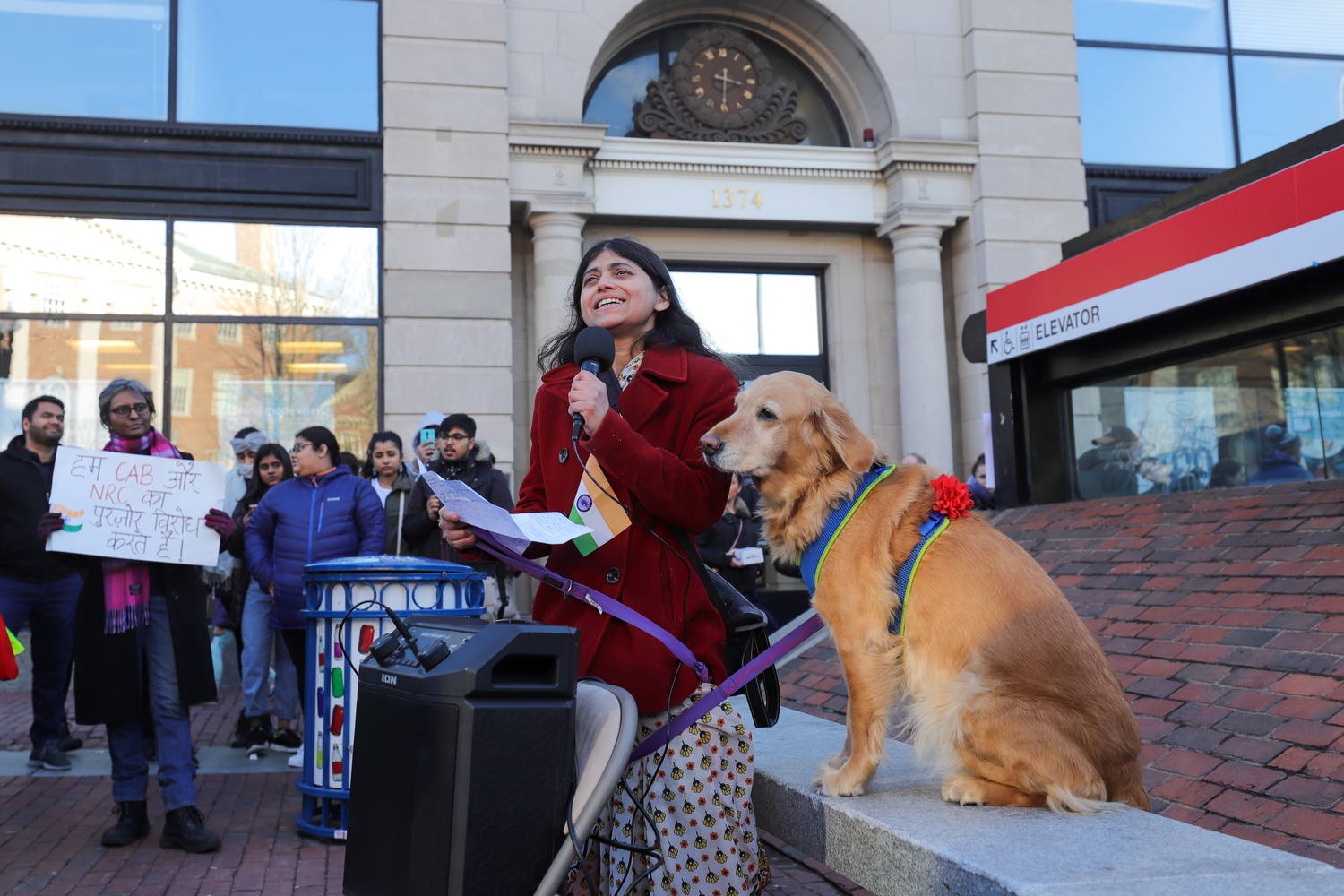 In an interview at the protest, Yengde warned that India’s recent update to the National Population Register is not only anti-Muslim but also anti-Dalit, India’s lowest caste. The register, which is currently being enacted, collects demographic and biometric information on, and requires documentation from, all of India’s citizens.

“We are disempowered and disenfranchised by this law,” Yengde said. “The state will have more authority to discard us and deprive us of all the facilities, as well as a state sponsored initiatives, that the constitution asks the state to do for the people who belong to the lower spectrum.” 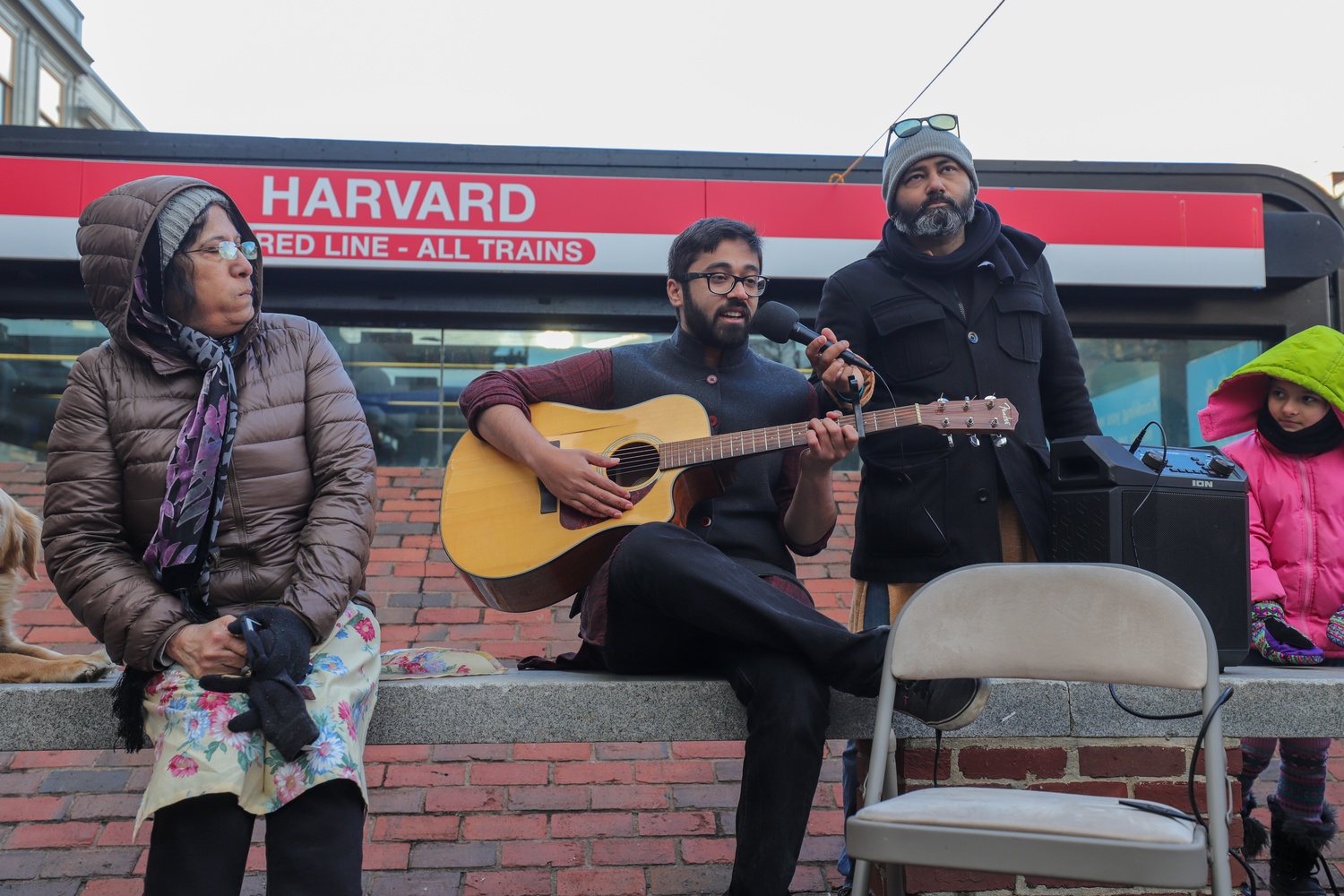 Surrounded by protestors holding signs reading “I do this for the love of India,” and “Say no to fascism,” Hussain called upon the crowd to help protect India’s constitution at all costs. 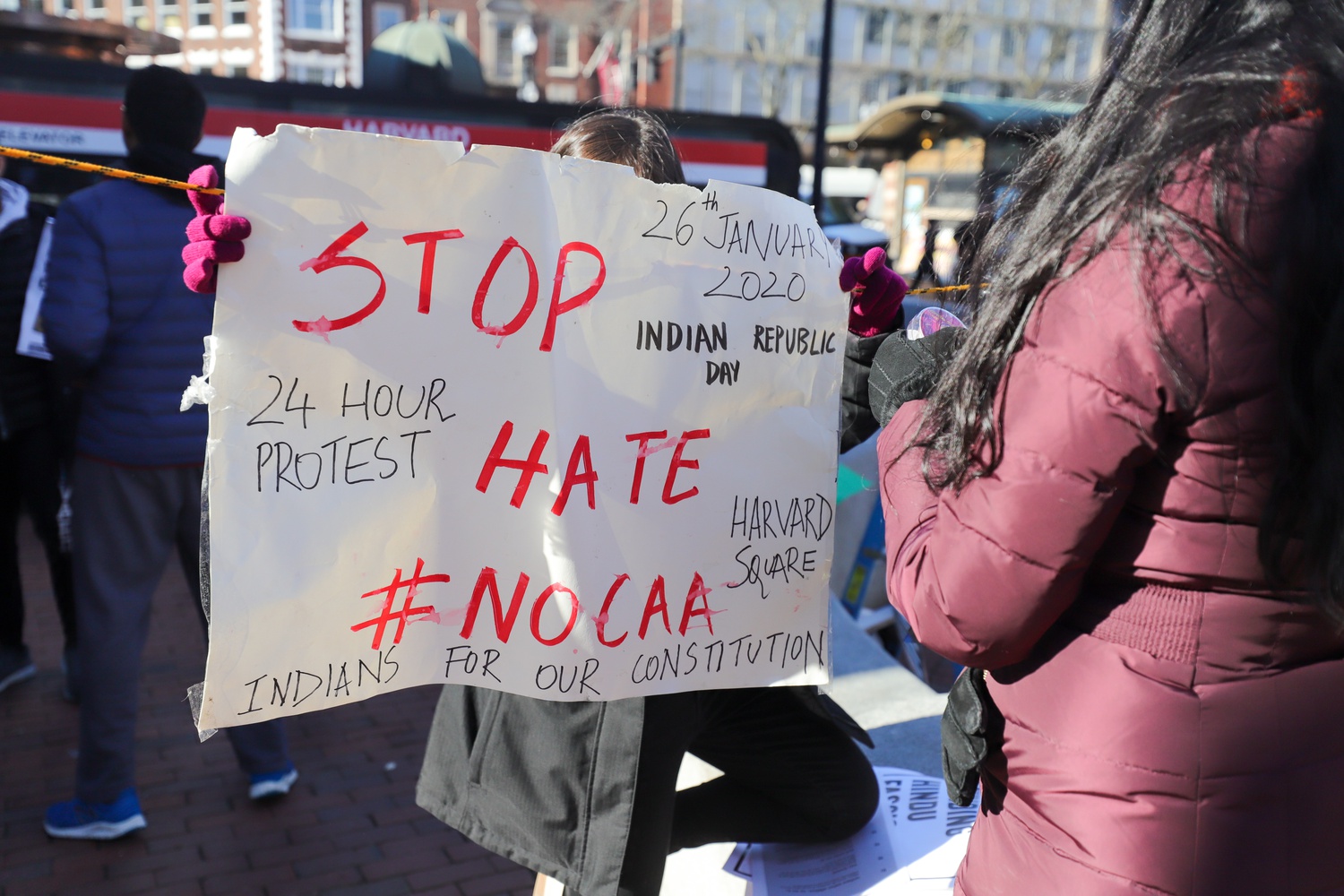 “We cherish our constitution because we have gotten it through sacrifices,” Hussain said. “Hundreds of thousands have given their lives for our freedoms, and we’re not just going to give them up like this.”