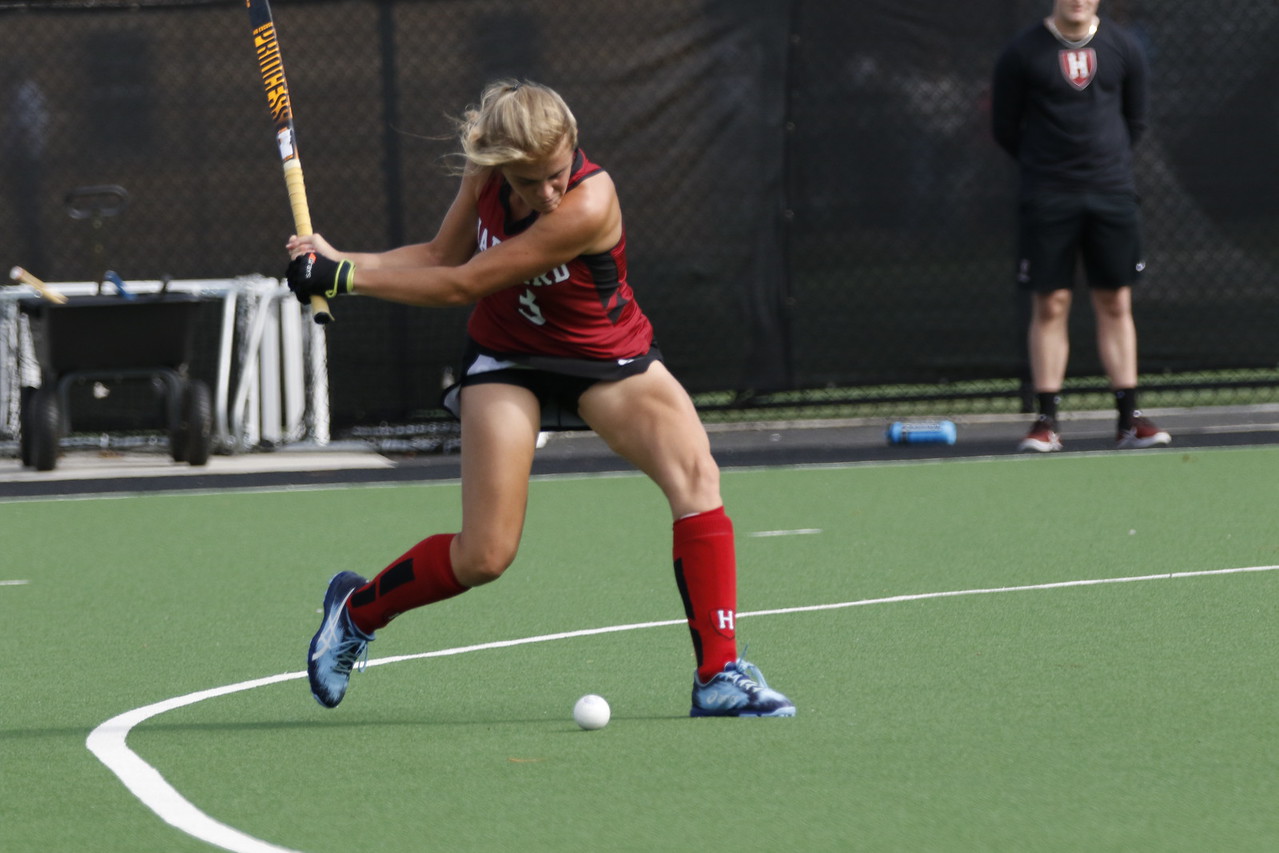 For the first time this decade, the Harvard field hockey team’s first two games of the season came against two top-25 opponents. The Crimson (1-1, 0-0 Ivy) emerged victorious from a hard-fought season-opener against No. 22 Albany that required extra time to determine a winner, before falling to No. 4 UConn two days later after giving up a trio of goals in the first half.

“After last year, we wanted to have a tougher schedule [and] have more challenges for ourselves,” Harvard coach Tjerk van Herwaarden said. “I think that is exactly what we got this weekend.”

The Crimson is coming off a record-breaking season, which included a program-high 14-game win streak on the way to a program-best ranking of sixth in the nation and its first ever NCAA Quarterfinal game.

Harvard still had some rust to shake off, though — rust that opponents have already had time to work on. Albany came into its matchup against the Crimson with two official games and two exhibition matches under its belt; UConn entered with three games — all wins, all against top-25 opponents.

After a nail-biting win in Albany, Harvard traveled cross-border to face No. 4 UConn (4-0, 0-0 Big East), a perennial NCAA tournament team that, although less world-renowned than the same school’s women’s basketball team, has also won three national championships in the past six years.

“We started off really well,” captain Bente van Vlijmen said. “We had our front set up really well, and we were very dominant, and then we let [in] a kind of stupid goal against us. I think that ripped us apart a little bit, and we weren’t really playing as a unit anymore.”

Fifteen minutes after that initial goal in the second minute of play, a pair of scores only five minutes apart dug Harvard even deeper into the hole. Then, the digging stopped.

The Crimson matched the Huskies for shots in the remaining 35 minutes, and although Harvard was unable to find the net in its four shots on goal, UConn was also held scoreless.

“I think we played a lot better in the second half, and that’s because in the second half...we told each other, ‘Guys, this is not a league game, we have nothing to lose, this is a top four program,’” van Vlijmen said. “It didn’t seem like we wanted to score, that we wanted to win — and after we had that talk... we played a lot better, we just couldn’t get it in the goal cage.”

The Crimson opened the season against a top-25 opponent, offering no opportunity to ease into its first competition since last November’s NCAA Quarterfinal exit against Princeton.

Albany (1-2, 0-0 American East) is a team rightfully renowned for its defense — the Great Danes allowed 12 goals over the 2018 regular season, only twice yielding more than one score. played with tremendous defensive pressure for the whole of the game.

Albany (1-2, 0-0 American East) played with tremendous defensive pressure for the whole of the game. The Great Danes allowed 12 goals over the 2018 regular season, only twice yielding more than one score.

“When you look at Albany…they have one of the best goalkeepers in the NCAA,” van Herwaarden said. “They are really good on defense, so you know you’re not going to get that many chances.”

After going down at the tail end of the first half after the Great Danes’ third shot of the match found its mark, the Crimson resolved to step up its game.

“We were like, ‘[Are] we gonna really lose our first game?’” Harvard captain Bente van Vlijmen said. “Then, in the second half, we really start fighting.”

Nine shots into the second half, the Crimson got its chance. A penalty corner for Harvard saw the ball find sophomore midfielder Kiley Allen, who passed to sophomore forward Rachel Greenwood and sent it home. The game was tied.

The remaining eight minutes of regulation played out with only one shot per side, and the match headed to overtime. Three minutes later, another Crimson penalty corner. Senior forward Casey Allen passed to junior back Hannah Pearce, who struck true for the game-winner.

“You need to trust your attack… 17 shots, I believe, 12 on goal — and eventually they fell,” van Herwaarden said.

Harvard returns to play for its home opener on September 12 at 4 p.m. against No. 21 Stanford, its third-consecutive game against a ranked opponent.

“It’s another non-league game,” van Vlijmen said. “We always expect to play well against them, because we absolutely love playing against teams like that, but I can’t tell you if we’re going to win or not… We really need to stick to our plan and try to get that first goal so we can dominate the game instead of our opponents. I think that’s something we’re going to focus on.”

In the meantime, the Crimson has some strategies to adjust, and some positives to hold the same.

“One of the big things is starting that first half with a lot of energy — playing it how we want to play it, not so much how our opponent wants to play it,” van Vlijmen said. “I think we need to respect ourselves more and give ourselves the confidence to play our own game in the first half.”