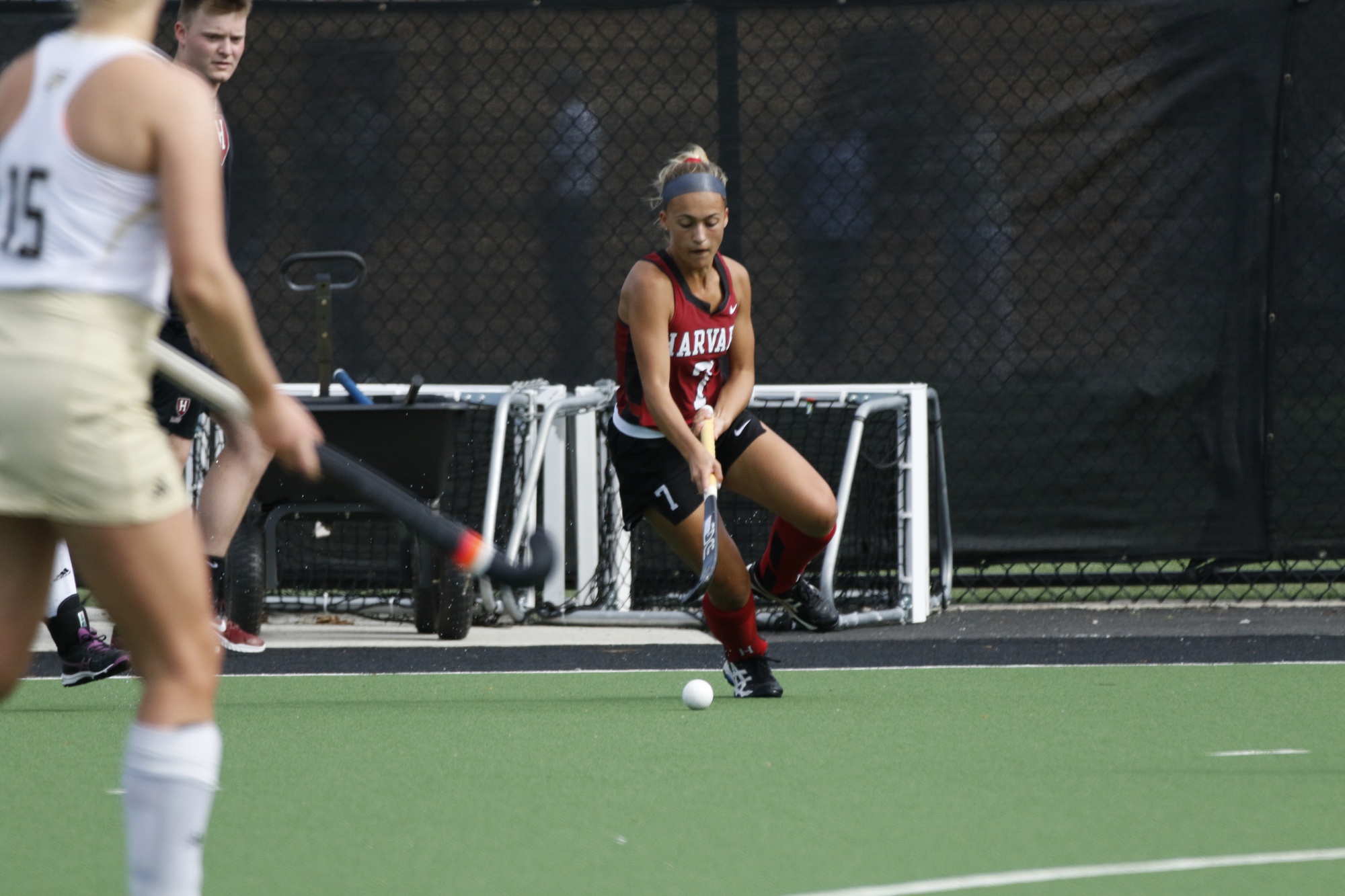 Senior Casey Allen controls play during a game last season. In Monday’s contest with UMass, Allen earned the team’s lone assist. Throughout the course of the season, the senior has factored into half of all of the team’s goals. By Timothy R. O'Meara
By Connor J. Wagaman, Crimson Staff Writer

The past week has been an adventure for No. 10 Harvard field hockey fans. A near-win against a top-25 opponent in Stanford, and a tight game against in-state rival UMass have held the Crimson steady at .500. The rollercoaster of hot and cool play has given Harvard field hockey plenty to be proud of and plenty to think about as the Crimson heads to its final game before Ivy League play begins.

Harvard (2-2) needed a win after suffering consecutive losses to No. 4 UConn and No. 18 Stanford last week, and it earned one Monday night on the road against UMass to return to .500. The game was tied at the half, in spite of a strong Crimson start, after UMass (2-4) managed to score twice in the second half.

“We had two different Harvard teams,” said Crimson coach Tjerk van Herwaarden. “One where we were really bringing a lot of energy and putting it to work … [but being] at ease snuck up on us.”

After the intermission, Harvard took to the field with its initial energy, putting up two shots before earning its decisive penalty corner ten minutes in. Freshman defender Mazarine Broze flicked the ball into play. A scramble in front of the net ensued, and sophomore forward Rachel Greenwood fired. The ball rebounded to its point of origin, Greenwood collected, set, and shot again — this time for the game winner.

“We have a very talented group with really good options on that penalty corner,” van Herwaarden said. “I think our penalty corner can definitely be a strength for us.”

Harvard had entered with the same energy it used to close out regulation against Stanford, scoring on the first shot of the game. An assist from senior forward Casey Allen four minutes in, and sophomore forward Olivia Hoover buried the ball in the back of the net.

Ten minutes later, co-captain Mimi Tarrant stole the ball in the middle of the field and drove to the goal for a perfect shot. The Crimson leapt out to a 2-0 lead.

“We were really dominating, in control that first quarter,” said van Herwaarden. “I think we just were thinking, this is going to be an easy game for us, and we got hit hard when we thought that, allowing UMass to come back on two easy goals.”

UMass took to the field in the second quarter showing the same vigor with which Harvard had entered. Drawing inspiration from their namesakes, the Minutewomen beat back the Crimson coats to knot the game at two to close out the half.

With its tied score, the second half brought a clean slate for both teams. Harvard drew strength from that tabula rasa, taking to the field with a determination to bring this win home. Such a quest was not without its challenges.

Ultimately, the Crimson scored in the third quarter and held on for the win.

“We knew we’d played well against Stanford, and it was making sure we could get the win off the back of our good play,” Tarrant said. “Overall, very happy with the fact that we won against UMass today. I think that was really important for the team’s spirit.”

After 58 minutes of play last Thursday, Harvard was minutes away from dropping back-to-back games for the first time since a September 2017 loss to then No. 2 — and eventual national champion — UConn.

The Crimson, though, had been on fire the entire last quarter, emerging from the break with a palpable desire to triumph over No. 18 Stanford (5-3).

A shotless third period from Harvard belied the effort seen thus far in the game. Despite being in the hole, the Crimson outshot Stanford by a 9-3 margin through the first half, the only goal a Stanford score on a penalty corner.

Then, with less than two minutes to go, Harvard was awarded a penalty corner of its own. The Crimson executed a playbook-perfect setup: the shot from Casey Allen, the placement at the top of the arc by sophomore midfielder Kiley Allen, and the shot from co-captain Bente van Vlijmen to send it home. But the unbreachable Stanford goalkeeper, senior Kelsey Bing, managed a deflection. Casey Allen cooly collected the rebound and fired, tying the match.

Although not literally last-minute, Harvard had waited 58 minutes and 12 shots for its goal. Ninety seconds later brought another Crimson penalty corner. This shot, though, was not destined for the greatness of its predecessor. The game headed to overtime.

Six minutes into the first of potentially two sudden-death overtimes, a penalty on Harvard in the penalty circle brought a one-on-one. The crowd rose to its feet in support of stellar sophomore goalie Ellie Shahbo, a first-team First Team All-Ivy selection, who managed to deflect the shot and keep the Crimson’s hopes alive.

One minute into the final block of overtime, an arching shot by Rachel Greenwood would have ended the game, but for the reaching stick of Bing. The chance was Harvard’s last of the night, and the game headed to penalty strokes, where Stanford emerged the victor.